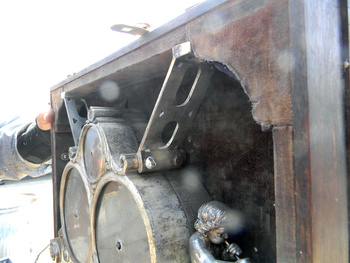 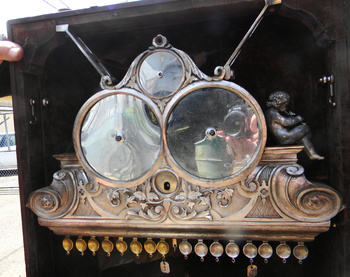 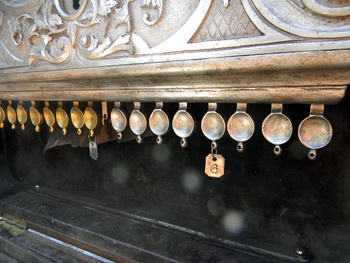 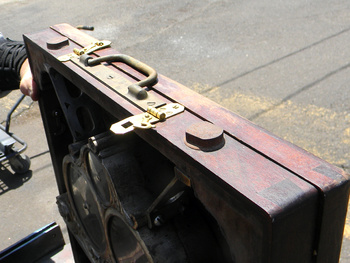 The two larger faces start at 100 at the top and go in increments of 5. The hand on the left moves clockwise and the one on the right moves counterclockwise. The small middle face has 50 at the top and also goes clockwise in increments of 5. On that smaller face is an even smaller gauge (?) that measures (?) in thousandths. There are 16 (finger tabs?) at the bottom that when pushed move the hands on the faces. Each finger tab has a place where a small metal flag with a number on it hangs. Most of them were missing, but I think they ran 1 through 8 on one side and 8 down to 1 on the other side. The tabs on the left are zinc colored, and the ones on the right are brass. Above the finger tabs is a wheel that turns. It has numbers from 1 to 24, and each time it turns it displays one number counting up to 24. There is a re-set button to make all the hands point straight up, and the 1 through 24 wheel go to the number 1. Because it has a wheel with the numbers 1 through 24, that makes me think of the hours in a day, but I have no idea if that’s correct. On the back there is a place to fit a key to wind this thing. It is missing the two panels that folded up to enclose it, but originally it had two wooden sides that came up to surround it so that it could be protected and carried; so whatever it was once used for, it was portable, and about the size of a briefcase. There’s a small handle on the top. There is a small angel on one side, and a place where another one sat on the other side, but it’s no longer there. Anyone have any idea what it is? It was found in a horse barn, although we have no idea if that has any bearing on where it was originally used. There are no maker's marks, or dates.

Help me! My curiosity is burning!!