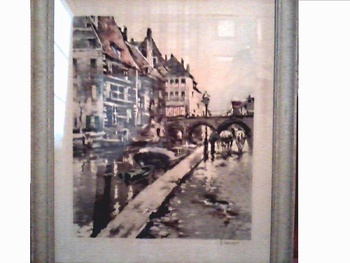 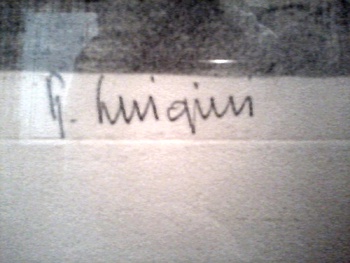 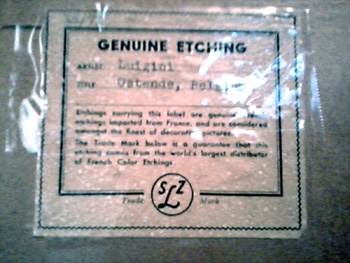 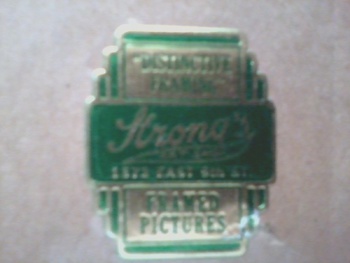 I've been finding a lot of nice art work lately.Mid -century oils and prints. I usually don't post them because they are hard to photograph and there is no category for them on CW (at least oil paintings.) The one I found today is actually by a known artist "Ferdinand Jean Luigini" so I thought I'd post it. It's complete in it's original frame and for once no one tried to open it. The mat is a bit yellowed but that really doesn't bother me. All the labels are there which is great. Seems to be original. Signed in pencil on the etching by the artist. Numbered on the tag ,but no date. Title says Ostende Belgium, but "Quai Sur La Dyle" is the proper title. Most of these were done in the 20's and Luigini died in 1943. So I figured he had to be alive to sign this. It looks like an authentic signature. It appears to have been bought in France with it's mat and then framed here in good old Cleveland Ohio. A nice find and worth a bit too ! -Mike-

Ferdinand-Jean Luigini (1870-1943) studied art in Paris under Emile Verhaeren. He began exhibiting his landscapes and architectural renderings in Paris in 1892 with the Salon des Artistes Francais. Within several years his art was regularly shown in London, Brussels, Amsterdam and New York.
Ferdinand-Jean Luigini was equally famous for both his large colour aquatints and for his watercolours. One contemporary scholar wrote, “Ferdinand Luigini, a brilliant watercolour artist, succeeds in lending his etchings the fascination of glowing pictures. The deep rich tones are obtained by very careful biting. His style varies with his subject. Some of his plates ... show the broad sweep of the painter’s brush bent upon rendering the atmosphere of large spaces. ... His most successful plates portray the autumnal aspects of Flemish landscape. * These words clearly apply to this large, beautiful aquatint and etching.
The artistry of the original aquatint and etching printed in colours reached its most creative era in the 1920’s decade. Fine artists throughout Europe and America produced outstanding work in this demanding medium, however, etchers in Austria and France led the way. Famous Austrian artists of the period included Luigi Kasimir, Max Pollack and Hans Figura. Some of the many great French artists were Raffaelli, Manuel Robbe, Helleu, Armand Coussens, Gustave Henri Marchetti and Ferdinand-Jean Luigini.