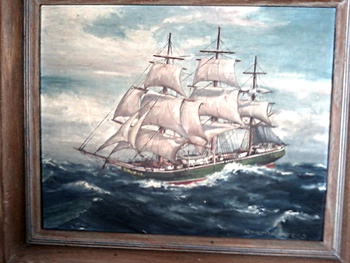 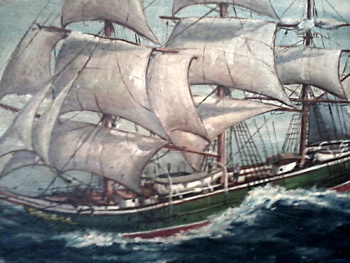 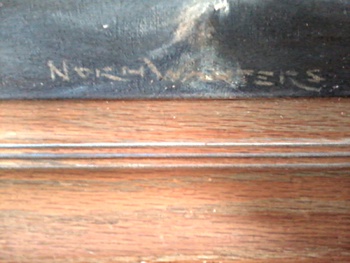 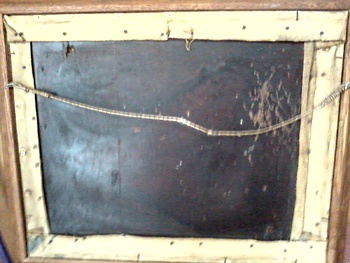 I had to have this when I saw it ! Not having enough money, I asked them to hold it, which to my surprise they did. After all I am their best customer. It looks really old but beside that it is a very nice painting. The ship has incredible detail and while a bit dirty..ok a lot dirty nothing is obscured. If it were cleaned, and it actually photographed a lot brighter than it really is, it would look amazing. The other thing is someone has taken it off it's stretcher and wrapped it around what looks like a board of mahogany veneer that was the right size and tacked it in place. So this may also not be the original frame.the canvas was probably an odd size. Looks like 21 x 17 but the picture doesn't seem damaged by doing this. This probably kept it from being torn or punctured over the years.You can see the stretcher outline on one side of the front in the sky area. There is a bit of scratching on the clouds but I think it's in the dirt not the paint. The signature is just unclear enough that I'm not 100% sure what the artist's name is. It looks like Norm Waters or Wanters or maybe it's not a name and says Nor' Wester. I really don't know. Haven't found anything online yet no matter what I search. -Mike-