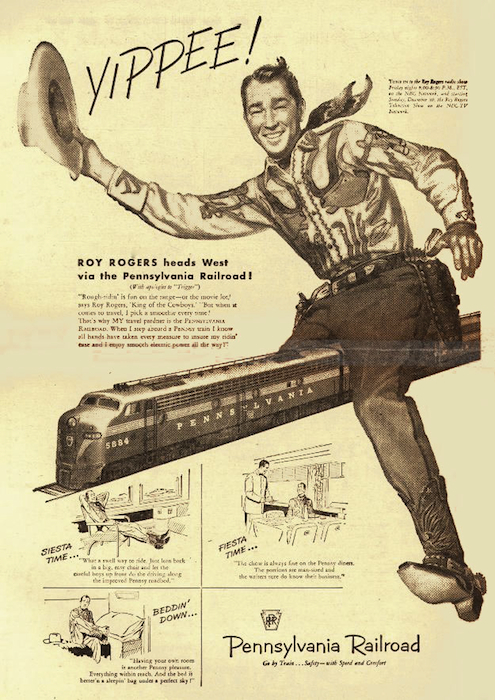 Was everyone asleep at the switch when they approved this 1951 newspaper ad for the Pennsylvania Railroad? It features the normally wholesome radio and movie star Roy Rogers.

Was everyone asleep at the switch when they approved this 1951 newspaper ad for the Pennsylvania Railroad? It features the normally wholesome radio and movie star Roy Rogers. 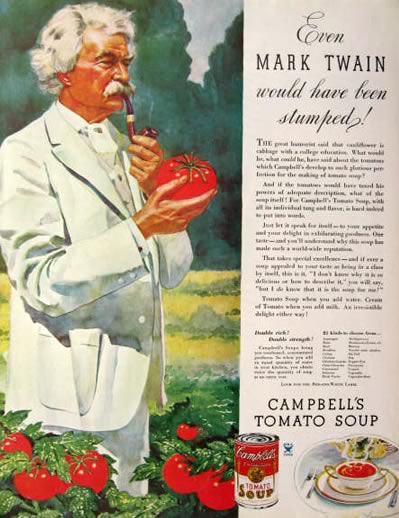 Campbell's Soup resurrected Mark Twain from the dead to have him sell their products in 1934. Can't imagine what the author, famous for his acerbic wit, would have quipped about that! 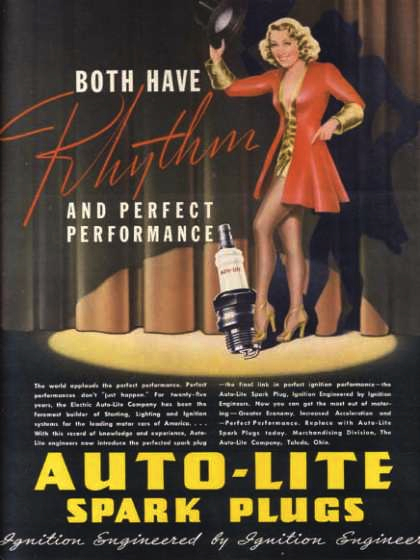 In 1937, when this magazine ad for Auto-Lite Spark Plugs was published, actress Joan Blondell had recently starred in Busby Berkeley's "Gold Diggers of 1937."

By 1947, Boris Karloff had parlayed his monster-movie reputation ("Frankenstein" in 1931, "The Mummy" in 1932) into this weird "Time" magazine ad for the Northern Pacific Railway Company. 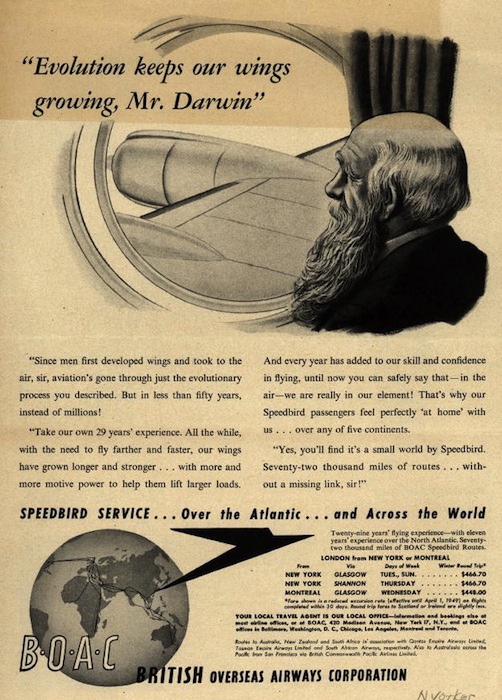 In 1948, the British Overseas Airway Corporation (BOAC) thought it would be a good idea to use 19th-century naturalist Charles Darwin to sell its services in the pages of "The New Yorker." 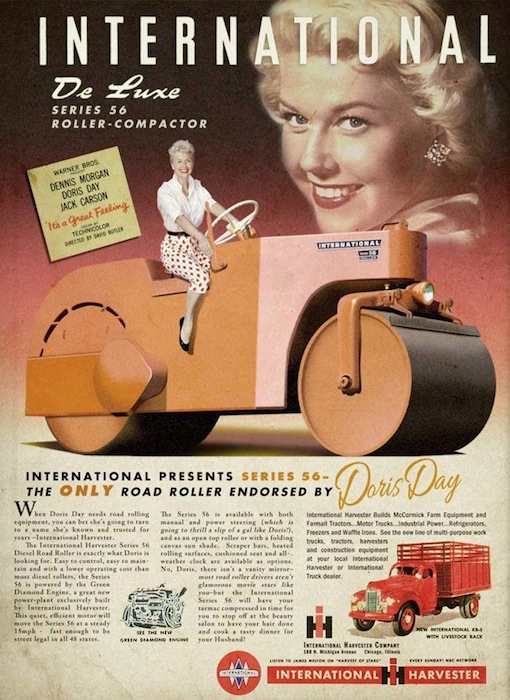 To help publicize "It's a Great Feeling" from 1949, Doris Day endorsed a road roller for International Harvester. If it's good enough for Doris... 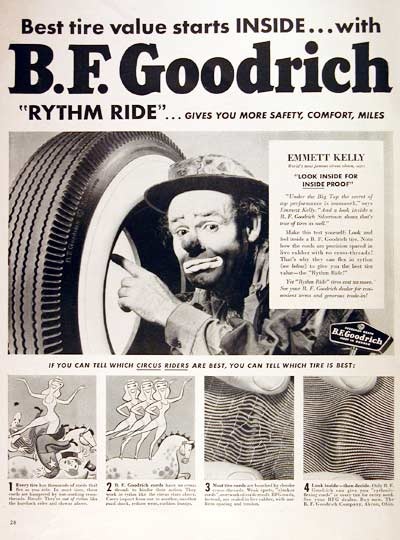 In 1950, tire company B.F. Goodrich decided its customers would be comforted by the assurances of the world's most famous clown, Emmett Kelly. I guess "Rythm Ride" is in quotes because it's misspelled. 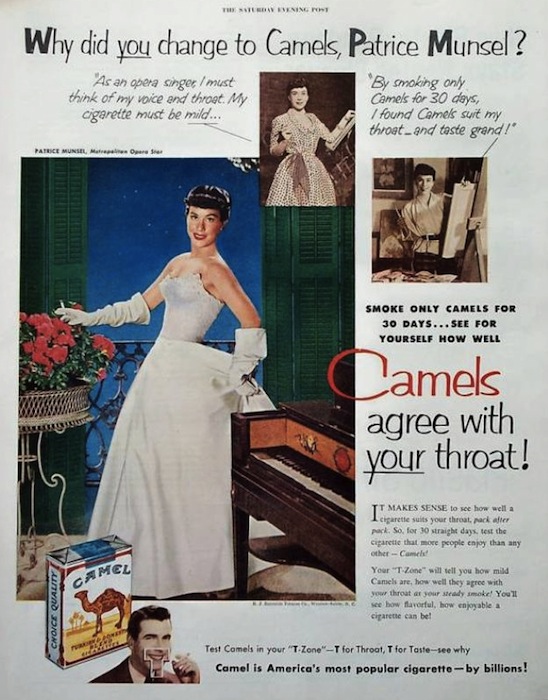 In 1952, Metropolitan Opera soprano Patricia Munsel claimed that Camels were easy on her throat. 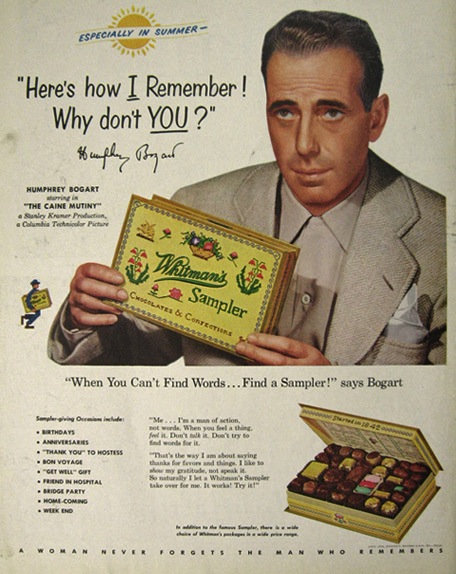 In this ad from 1954, Humphrey Bogart has a "get me out of here" expression on his face as he suffers through a photo shoot for Whitman's. Even he appears to realize he's the wrong guy for this job. 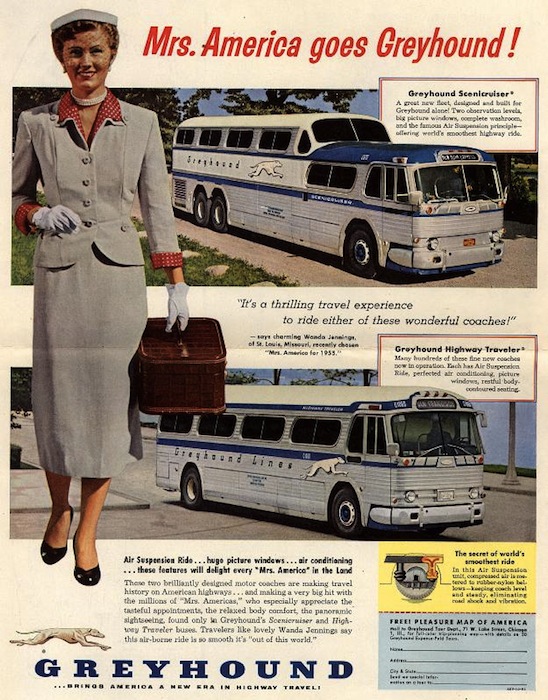 When Wanda Jennings was named Mrs. America of 1955, little could she have imagined that her reward would include a "thrilling" ride on a Greyhound, as seen in this ad from "The Saturday Evening Post." 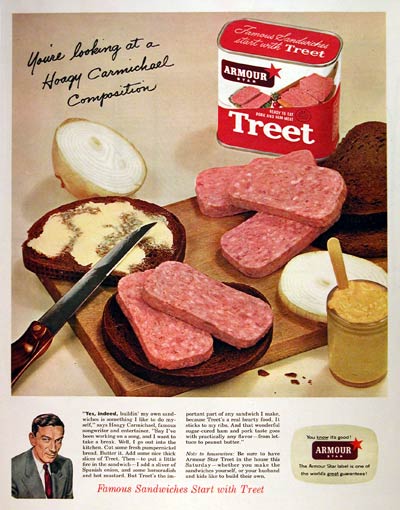 In 1956, one of the greatest piano players in the world, Hoagy Carmichael, lent his name to Treet, a competitor of Spam. No one thought to make a Treet hoagie? 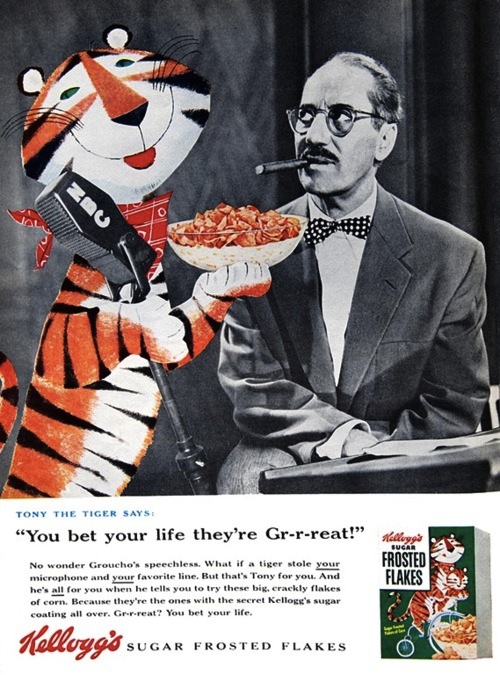 With "You Bet Your Life" at the top of the TV ratings in 1955, Groucho Marx was teamed up with Tony the Tiger to sell Frosted Flakes. 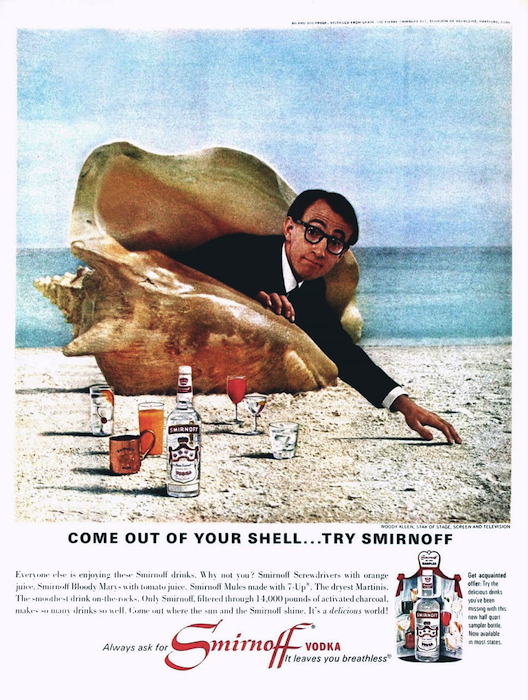 In recent years, the inability to come out of his shell has not been Woody Allen's problem. This ad from 1966 suggests Smirnoff Vodka may deserve at least some of the credit, or blame. 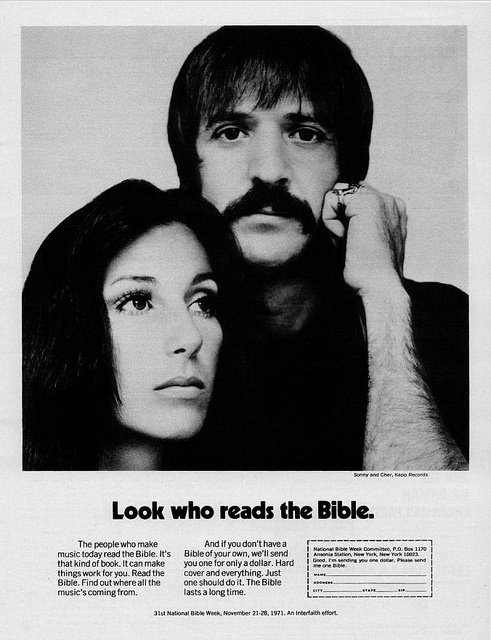 Even the Bible took out ads, as in this one from 1971 featuring Sonny and Cher. 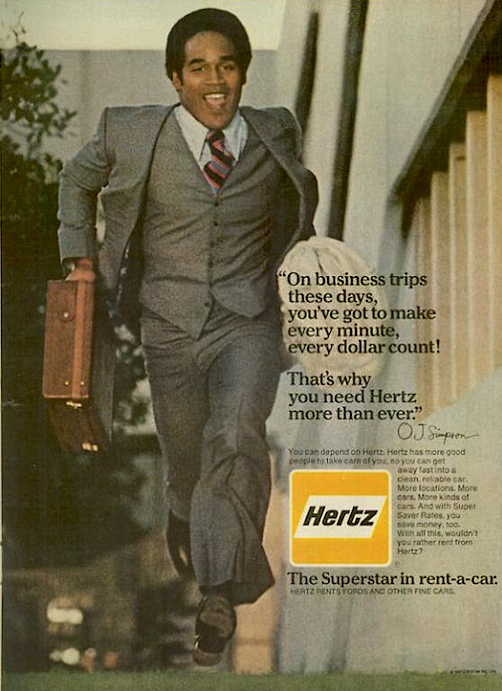 Throughout the mid-1970s, former football star O.J. Simpson did countless print and TV ads for Hertz, many of which showed him running through airports. The Bronco chase was decades away. 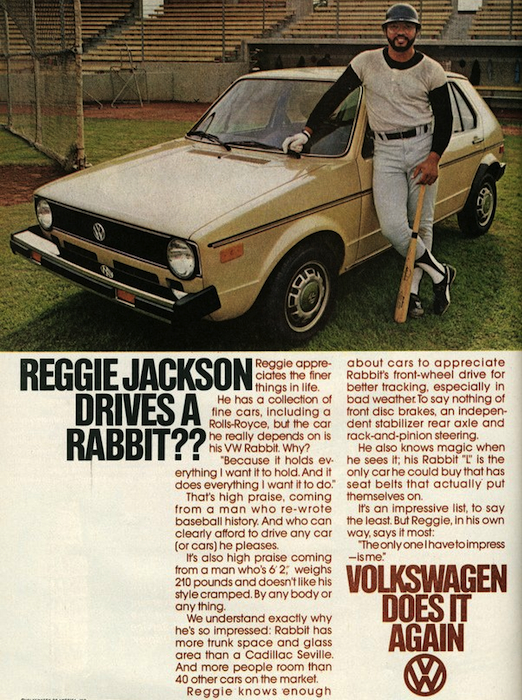 According to this 1978 ad, baseball slugger Reggie Jackson, who had recently signed with the New York Yankees, drives a VW Rabbit. What do you think? 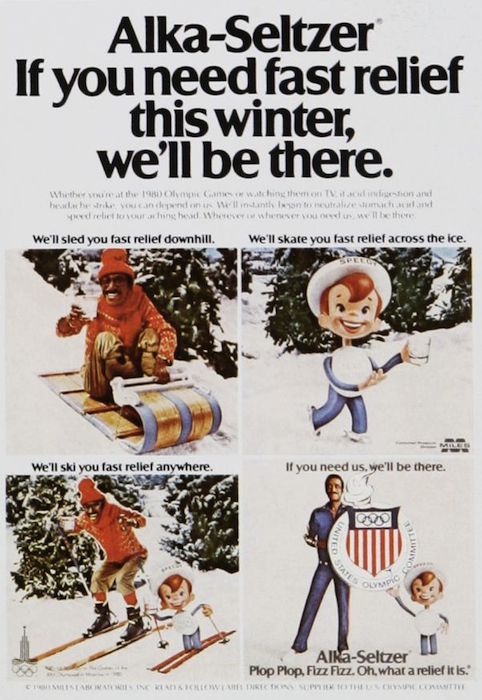 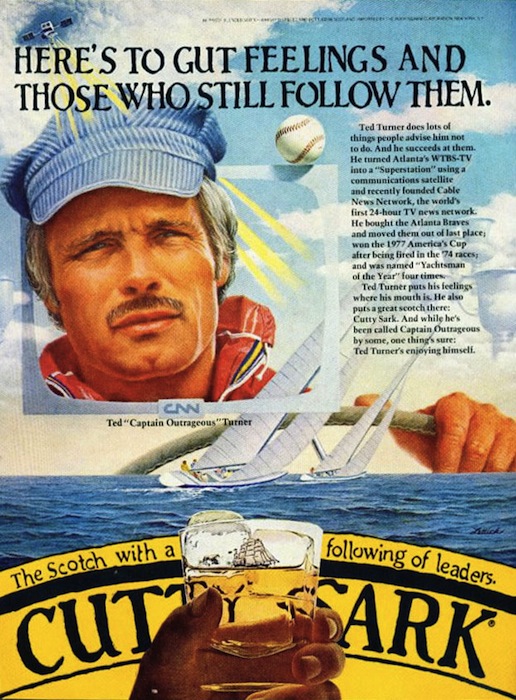 With his fledgling Cable News Network to support, in the early 1980s, Ted Turner capitalized on his success in the 1977 America's Cup by lending his name to Cutty Sark, a brand of blended Scotch. 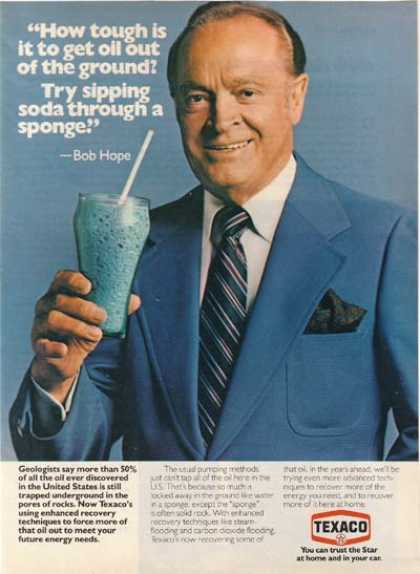 You have to wonder how these 1982 ads starring Texaco spokesperson Bob Hope would go over in today's age of fracking. 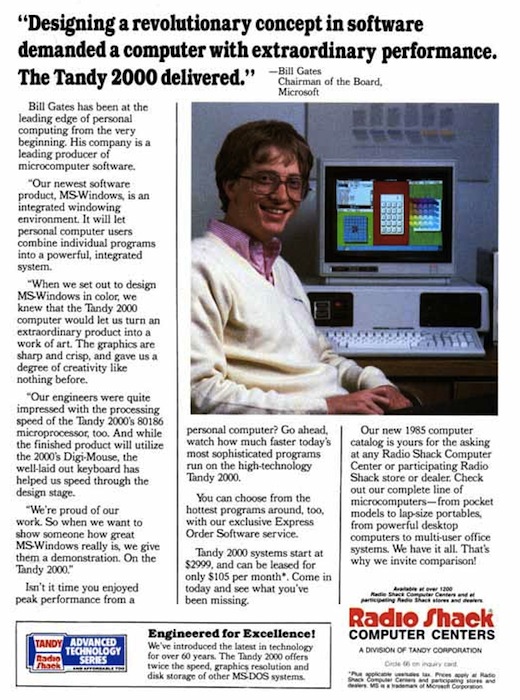 In 1984, the year Apple launched the Mac, then-Microsoft CEO, Bill Gates, was touting the virtues of Radio Shack's Tandy 2000. 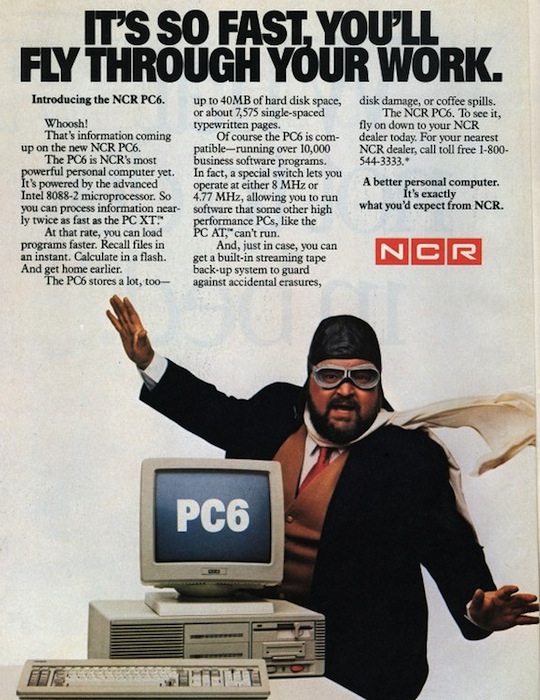 In 1985, NCR, which had made its fortune on cash registers, thought users would take comedian Dom DeLuise's word for the speed of its personal computers. They didn't. 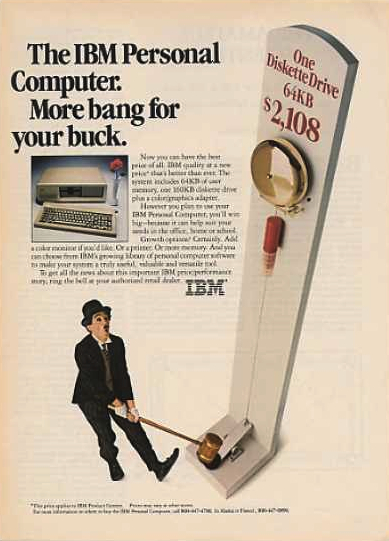 In retrospect, IBM's decision to have a Charlie Chaplin look-alike hawk its mid-1980s computers appears tin-eared, but the ads were extremely popular at the time. 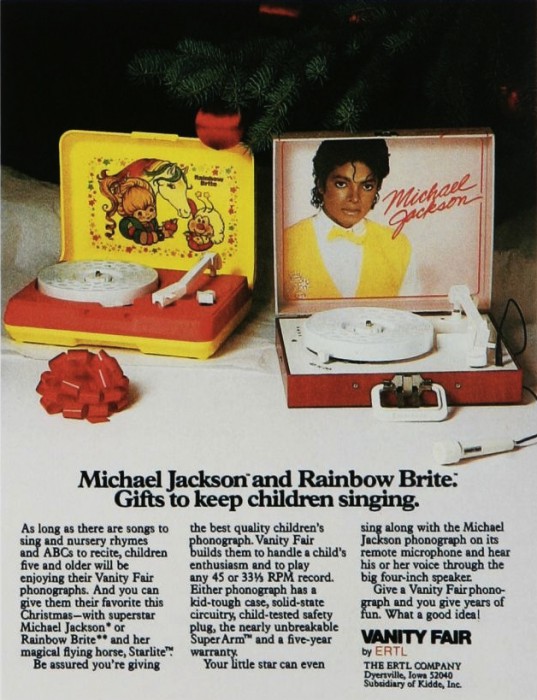 In 1984, still reaping the harvest known as "Thriller," Michael Jackson licensed his likeness on any number of products, including this children's record player made by Ertl. 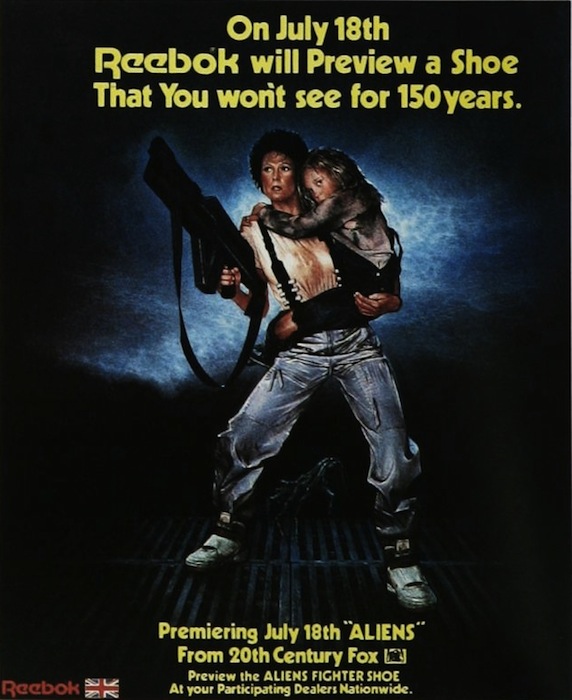 One of Sigourney Weaver's many cultural contributions from 1986's "Aliens" was the debut of Reebok's Aliens Fighter Shoe. 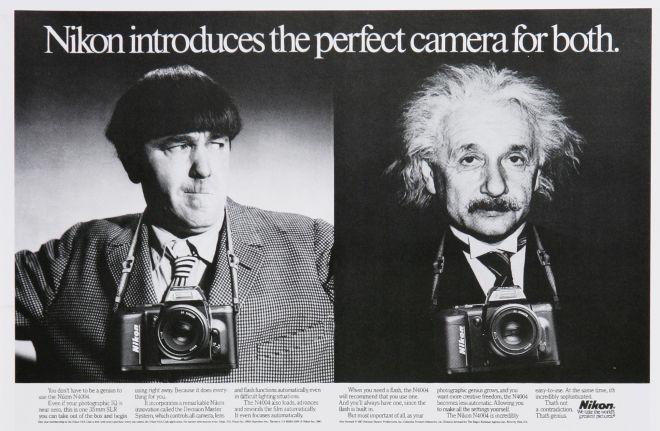 In 1987, Nikon apparently thought that photographers whose intelligence fell somewhere between Moe's of the Three Stooges and Albert Einstein's would be prompted to buy one of its high-end cameras. 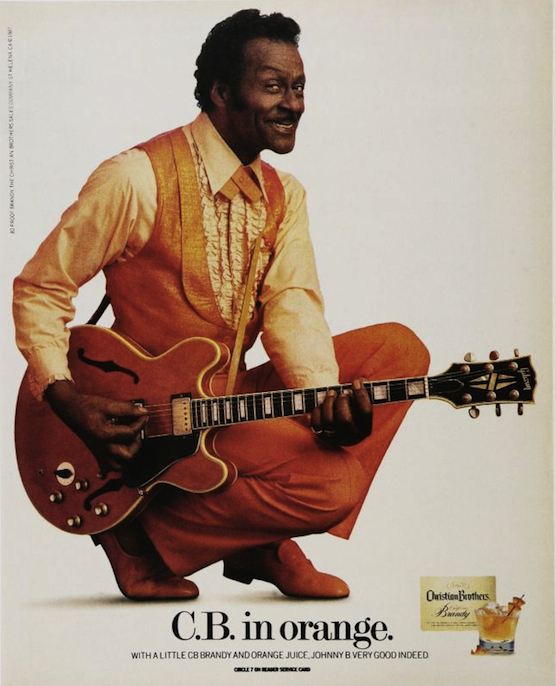 Chuck Berry's and Christian Brothers' initials are C.B. Get it? This ad from 1987 sure hoped so. 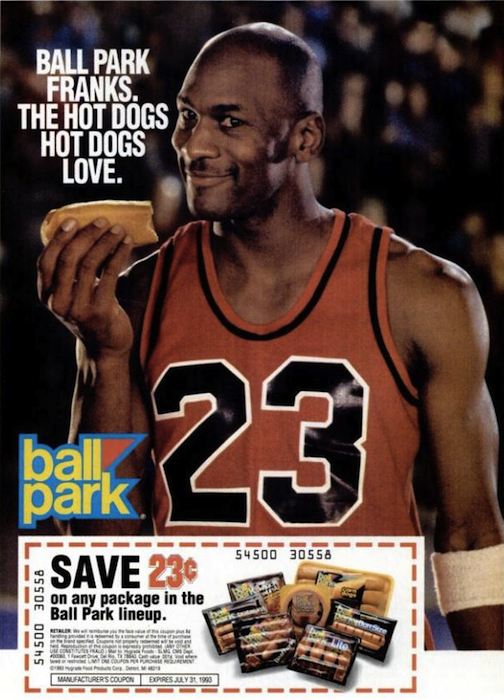 Among the less glamorous items basketball legend Michael Jordan has endorsed are hot dogs, as in this ad from 1993. 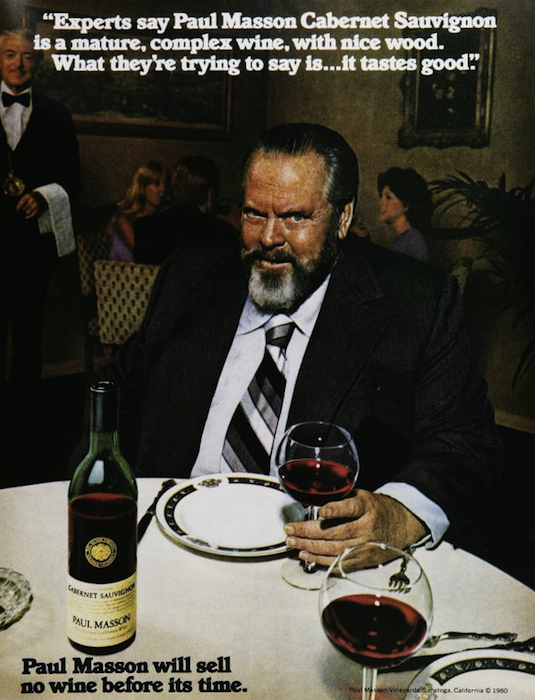 Finally, in the late 1970s, winemaker Paul Masson used filmmaker Orson Welles as its pitchman for its famous "sell no wine before its time" campaign. In this case, at least, it didn't take much to convince would-be customers that the man trying to sell them a bottle of wine enjoyed the stuff immensely.

There’s a moment in your typical advertising brainstorm when the people charged with wrestling the creative elements to the ground cry uncle, settling on a clumsy compromise for the sake of getting on with the really important business—billing their clients. Or so these advertisements fronted by some rather improbable pitchmen and women would suggest. Is a clown really going to convince us to buy tires for our cars? Did anyone ever believe Bill Gates bought his computers at Radio Shack? And don’t tell me it took a cheap brand of vodka to pry Woody Allen out of his shell. On second thought….

(Images via the Ad*Access Project at Duke University, Vintage Ad Browser, and others.) 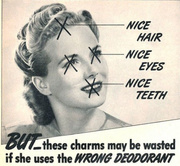