Flashback: A Collection of Masonic China

This article describes a sampling of Liverpool and Staffordshire china pieces with Masonic imagery, such as the coat-of-arms, pictorial representations, and verses from Masonic mottos and rhymes. It originally appeared in the March 1940 issue of American Collector magazine, a publication which ran from 1933-1948 and served antique collectors and dealers.

In any discussion regarding Masonic emblems as a decoration on old china, one immediately thinks of a Liverpool pitcher. So many are found with these symbolic signs upon them that one is apt to forget that Liverpool potters occasionally decorated other objects in this manner and that Freemasonry being world-wide, other potteries in England and in other countries likewise found Masonic devices a popular form of ceramic decoration. 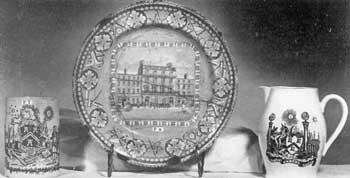 Masonic Mug, Plate, and Pitcher: Figure 1: a Worcester mug, circa 1760, with Masonic coat-of-arms, emblems and Masons wearing their aprons; Figure 2: Staffordshire blue-and-white plate depicting the Freemasons' Tavern, London, where in 1717 the Grand Lodge of England was organized; Figure 3: a Liverpool black transfer cream pitcher, probably part of a tea service.

However, from the number produced, pitchers so embellished seem to have had special appeal for a public eager for decorative china. The various Liverpool and Staffordshire examples shown here give a fair idea of the types of Masonic devices to be found upon such pieces. They have been chosen from the collection of the Grand Lodge of the State of New York, which has the most comprehensive assemblage of objects pertaining to Masonry in this country.

It will be observed that any design usually incorporates a number of emblems. Sometimes, however, particularly on articles other than pitchers, one of them may occur by itself or a single device may be worked into a design of an entirely different character. But since the only emblems which appear to have been used in such fashion are the Square and Compass, Trowel, All-Seeing Eye, Radiant Delta, Pyramid, Crossed Keys, Star, Hive of Bees and the Masonic Pillars, most of which are familiar to everyone, they should be recognized without difficulty.

The Masonic coat-of-arms is also found with a black field bearing three white (silver) castles between a white (silver) chevron on which is a pair of Compasses. But it more often appears with the colors reversed. These arms, incidentally, were originally granted to the liveried London Company of Masons in 1472 and its supporters, first mentioned in 1688, are the Pillars, properly Doric columns, which are often surmounted by globes.

Apparently Masonic designs were employed almost as soon as the transfer process of applying decoration to ceramics was perfected. This improvement in technique was accomplished at the Worcester pottery, England, about 1756, or about forty years after the founding of the first Grand Lodge of Freemasonry in London. There is a mug in the collection of the New York Grand Lodge bearing the Masonic coat-of-arms, mottoes, and numerous emblems, and decorated in black transfer, which is attributed to this pottery and is dated about 1760. This piece, Figure 1, one of three known examples, was found in Massachusetts. The other two are in museums in England.

The Metropolitan Museum of Art also has a very fine mug of soft-paste porcelain produced at Worcester about 1765 which bears, in black transfer on a clear white ground, the Masonic coat-of-arms, mottoes, and numerous emblems. This design was taken from a plate engraved by James Ross.

With Figure 5, we have the type of Masonic decoration most frequently found on Liverpool pitchers. It consists of numerous emblems contained between the Masonic Pillars with the mosaic pavement below. On the reverse side is a stanza of the Entered Apprentice song:

“The world is in pain, our secrets to gain, But still let them wonder and gaze on, For they ne’er can divine, the word nor the sign Of a Free and Accepted Mason.”

This verse is frequently found, often with weird variations in spelling, either by itself or in combination with Masonic devices. Below the lip is a medallion bearing the date 1798 and the name of the original owner, Thomas Hitchcock, Mechlenburg Street, Dublin.

The pitcher shown in Figure 4 has an extremely interesting design which, fortunately, can be identified, since it is taken from an engraving, well known in Masonic circles, by P. Lambert, R.A., entitled “Freemasons at Work. First and Last Stone of the Jerusalem Church.” It depicts three cherubs as Masons with Square and Compasses consulting a mystic diagram containing Masonic emblems and signs of the zodiac.

Figure 6 exhibits a well-executed transfer in rather delicate detail. The Freemasons’ coat-of-arms and many emblems are surrounded by a vine entwining further emblems. The design includes figures of three Masons wearing their aprons, an unusual feature. Above is the motto, “A heart that conceals, and the tongue that never reveals.” The reverse side is similar and below the lip is a large Square and Compass and the Masonic letter G.

The designs on the pitchers, Figures 7 and 9, are very much alike and probably both are adaptations of the same original drawing. Figure 7 has the verse of the Entered Apprentice song below, while Figure 9 has an unusual frame. On the reverse of the first is a full-rigged ship with the motto, “Success to Trade” below. Figure 9 also has a marine subject on its other side, a sailor standing on the beach pointing to a ship in the distance while expatiating to a young lady on the advantages of a sea-faring life. Undoubtedly, both of these pitchers were made to sell to ships’ officers, quite probably American ship captains, since many of them were members of Masonic lodges besides being excellent customers of the Liverpool potters. It is probable many more pitchers of this type exist.

A very nice little pitcher is shown in Figure 3. Probably it was intended for a creamer, in which case, originally, there must have been a teapot and sugar bowl to match. As has already been mentioned, such pieces with Masonic decoration are much scarcer than pitchers.

Four Other Masonic Pitchers: Figure 8: an Orangeman's jug in copper lustre and brilliant colors – not Masonic but design includes many of its emblems; Figure 9: Liverpool jug, black transfer decoration with unusual border; Figure 10: Liverpool pitcher with decoration in colors – design similar to Figure 5; Figure 11: Sunderland jug in purple lustre with Masonic decoration in black and colors.

A fine Liverpool teapot is illustrated on the cover which bears a motto particularly appropriate at the present moment, “The End of the Upright Man Is Peace.” The reverse side bears a similar design with the substitution of a lady for the gentleman as the central motif.

Below appears the signature, “Joseph Johnson, Liverpool,” the name of the artist who drew the original picture. Masonic decorations may also be found occasionally on the “frog” mugs so highly prized by collectors.

So far, all the pieces which have been mentioned have been done in plain black transfer. Figure 10 shows a Liverpool pitcher with the decoration colored in red, blue, black, yellow and green. The design is a variation of that shown in Figure 5. The reverse side, also colored, exhibits a garden scene framed between the Masonic Pillars wherein is a group of figures consisting of a woman with a child in her arms and two more clinging to her skirts. Below is an old rhyming precept:

“To judge with candor, and to speak no wrong; The feeble to support, against the strong; To soothe the wretched, and the poor to feed; Will cover many an idle deed.”

The blue Staffordshire plate shown in Figure 2 is one of a set originally owned by the United Grand Lodge of England, the Mother Lodge of all present Freemasonry throughout the world. The view is of the old Freemasons’ Tavern in London, the reputed birthplace of the Grand Lodge in 1717, with the former office of the Grand Secretary beside it.

That such pieces were ever made for general sale seems improbable. In any event, they are of the greatest rarity. But lustre pitchers, usually considered as Staffordshire products, with Masonic decoration are not too infrequently found. The one in purple lustre, Figure 11, is an example and is one of the so-called Sunderland jugs, as those which bear a picture of the famous bridge across the Weir River at Sunderland, England, are termed. The bridge picture here is below the lip; the side shown in the illustration has a design embodying many Masonic emblems and a view of a building taken from an old engraving supposed to depict the Temple of Solomon. On the reverse side is the frequently encountered verse of the Entered Apprentice song. Several other Sunderland jugs with Masonic emblems, all in purple lustre and quite similar to this one, but in different sizes, have been seen recently in this country. 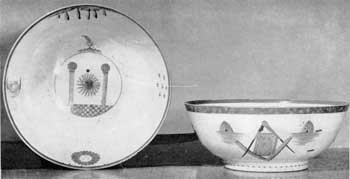 Pair of Lafayette Punch Bowls: Of Oriental Lowestoft, these were used in 1824 when General Lafayette was made a member of the Columbian Commandery of the Knights Templars of New York City. Decoration in gold and enameled colors; Figure 12: interior of bowl showing pair of Columns and Sun; Figure 13: Exterior showing Square, Compass, Bible, and pair of Beehives.

The pitcher, Figure 8, is not truly Masonic, although it bears many Masonic emblems. It was made for an Orangeman; that is, a member of that well-known institution of Protestant Irishmen called the Orange Society. This organization, after 1795, enrolled its members in lodges after the manner of Freemasonry and adopted many of that society’s emblems. This is an exceedingly attractive piece, decorated in copper lustre and brilliant colors. Under the lip is the date 1828 and the name, John Houlding, undoubtedly the original owner. Below is an equestrian figure of King William III, for whom the society was named, and on the reverse side two Orangemen are shaking hands.

It is not surprising to find pieces of Oriental Lowestoft bearing Masonic emblems since the production of made-to-order decoration was a regular practice at Canton. The Grand Lodge of New York possesses a splendid pair of punch bowls of this Chinese porcelain with such decoration in gold and enamel colors which originally belonged to the Columbian Commandery, No. 1, Knights Templars, a New York Lodge. They were used in 1824 at the ceremonies when Lafayette was made a member of this Commandery, but probably had been brought from China some years previously.

The Metropolitan Museum has on loan a similar bowl somewhat larger, but with almost identical decoration, and the Grand Lodge of New York owns a large fragment of still another which was found in Malta in 1850. These pieces undoubtedly were made especially to the order of ship captains or foreign merchants at Canton for presentation to the lodges of which they were members. But other pieces were made for the personal use of individual Freemasons.