This article focuses on papier-mache snuff boxes made for the American market after the War of 1812, which featured imagery of U.S. naval heroes and naval engagements. It originally appeared in the September 1945 issue of American Collector magazine, a publication which ran from 1933-1948 and served antique collectors and dealers.

Papier-mache, despite its French name, originated in China where it was made for many generations before its European advent. It became an industry in England in 1772 when Henry Clay of Birmingham took out a patent for its making and so reaped a fortune. As a result he became not only a man of substance but later county magistrate and high sheriff of Warwickshire. 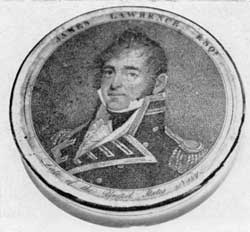 Captain James Lawrence: It was Lawrence who said, "Don't Give up the Ship," when he was mortally wounded in the engagement between the Chesapeake and Shannon. Copied from an engraving by Edwin after the Gilbert Stuart portrait.

This is not surprising for he had produced the inexpensive plastic of the day since it could easily be molded into desired shapes. As indicated by its name, it was mashed or pulped paper which was first molded then baked to drive off the moisture that had reduced it to pulp. When it became firm and hard it was finished with an enamel-like coat of paint and was then ready for a wide variety of decorative treatment. 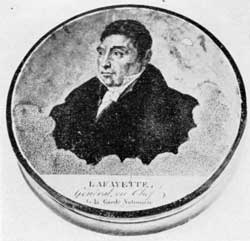 General Lafayette: This likeness was copied from an engraving by LeRoux after a portrait by A. Scheffer. It shows Lafayette in middle life when he was head of the French Garde Nationale.

In the early 19th Century snuff boxes were among the leading decorative accessories made of this material and Birmingham was the chief center of their manufacture. The most popular shaped snuff box was circular, about three inches in diameter, with a flanged lid that fitted tightly onto the base. It was light, compact and held a good amount of snuff. It was what manufacturers and retailers of novelties today would call a good seller and the Birmingham makers made the most of their opportunities. 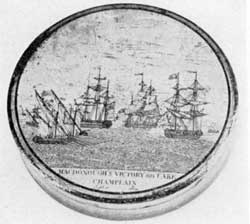 Macdonough's Victory of Lake Champlain: The victory was won September 1814. This engraving was adapted from one of the contemporary prints of this decisive inland naval engagement.

They knew there was a big market waiting for them in the United States if they could make these snuff boxes attractive. So they set to work. 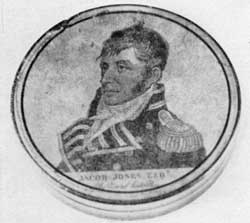 Captain Jacob Jones: The engraving was copied from the print by Edwin done after the portrait by Rembrandt Peale.

The War of 1812 gave them their chance and by the time the Treaty of Ghent was signed in 1814, or possibly a little before, quantities of papier-mache snuff boxes were produced at Birmingham and decorated to appeal to American trade. These decorations consisted of circular pictures that commemorated the naval prowess of the United States in that war where England won all of the land battles and lost practically all of the sea engagements. 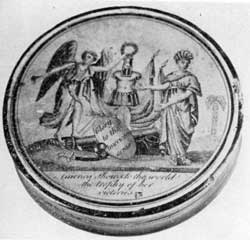 Glory to The American Arms: The symbolic design of this snuff box lid bears the added wording, "America Shows to the World the Trophy of Her Victories."

Snuff boxes ornamented with portraits of the leading American naval heroes or with scenes depicting outstanding naval engagements naturally appealed to the citizens of a young republic that wanted to make as much as possible of its naval victories and forget as quickly as possible defeats suffered on land. 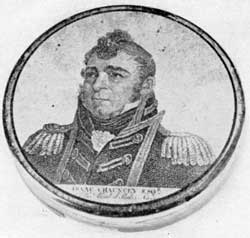 Captain Isaac Chauncey: This was copied from an unsigned American contemporary engraved portrait, done after the painting by Gilbert Stuart.

To this end special circular copper plate engravings were made, chiefly in England, though a few came from France. They were copied from larger engraved prints of the War of 1812, then being published in goodly numbers. These small-size round pictures were ideal for gluing either to the lid alone or both lid and bottom of the snuff boxes after the boxes had been painted with the enamel-like finish, usually black. The final process was painting the entire box with a coat of transparent copal varnish. Made in quantity for this new market, they sold with a speed that quite equalled their makers’ expectations. 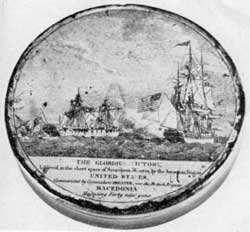 Victory of United States over The Macedonia: This view of the engagemant stresses in its caption that the capture was achieved in seventeen minutes.

Their vogue lasted some fifteen years, from about 1815 to 1830. After that papier-mache was used to make a wide range of things ranging from small boxes to occasional tables and decorations in the more elaborate Victorian manner. But these snuff boxes by themselves form a comprehensive pictorial account of the American men and ships that played a dominating part in the War of 1812 and as such are of special interest to collectors. 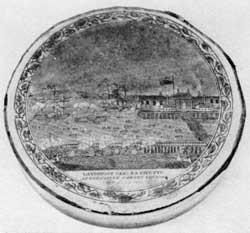 Unfortunately the men who made the engravings for these snuff boxes did not sign their work as did the engravers of the larger prints which they copied. So who they were is not known. Occasionally however, sheets bearing engravings intended to be mounted on snuff boxes can be found in print collections which establishes how they were originally made.

A Decatur Snuff Box: The lid bears the likeness of Commodore Decatur, copied from an engraving of the portrait by Gilbert Stuart. On the bottom is a picture showing capture of the Macedonian by the United States that occurred October 25, 1812, copied from engraving of same name.

Similarly, some of the same portraits and naval engagement scenes appear on Staffordshire pitchers. This shows that the men who prepared the decorative transfer print plates for use by the potters also copied them from the same larger prints that served as the source material for the snuff box pictures.

Hull and the Constitution and Guerriere: On the lid is an engraving copied by the print by Edwin of Gilbert Stuart's portrait of Captain Isaac Hull. On the bottom the engraving depicts the capture of the Guerriere by the Constitution that took place August 19, 1812.

Practically all of the latter are of the War of 1812. An exception was the return visit of General Lafayette who came to the United States as an old man in 1824. He came as the guest of the nation and spent about two years visiting all sections of the country. For that occasion at least two commemorative snuff boxes were made. One has his portrait on its lid and the other shows his landing at New York. After that papier-mache snuff boxes and American history parted company and interest in them for collectors thus ceases.

Commodore Perry's Victory on Lake Erie: The lid bears an engraved copy of a scene of this engagement and on the bottom a representation of his letter to the Secretary of the Navy, dated September 10, 1813, announcing his victory over the British squadron. Victory of United States over The Macedonia: This view of the engagement stresses in its caption that the capture was achieved in seventeen minutes.

Snuff BoxesInhaling snuff, or snuffing, as it is also called, was first witnessed by a…