This article discusses porcelain items imported during the 18th and 19th centuries, noting the evolution in American taste from French to English china and the items used by U.S. presidents. It originally appeared in the February 1943 issue of American Collector magazine, a publication which ran from 1933-1948 and served antiques collectors and dealers.

For the most part our colonial ancestors were accustomed to a simple and even frugal mode of life. But here and there along the eastern seaboard were large comfortable homes owned by well-to-do English families, either in the service of the Crown or attracted to America by the opportunity of acquiring large tracts of virgin land at a comparatively low price. 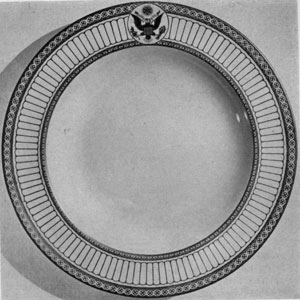 A Theodore Roosevelt Plate: This large dinner service was made by the Wedgwood Potteries in England. The form was adapted from simple one of the colonial period. The decoration was of gold with United States seal executed in natural colors.

Usually they brought their household effects with them as well as their notions as to the manner of life proper for country gentle folk. Their fine estates are still to be seen in the South, especially along the James and Potomac Rivers; in the valley of the Hudson, where they were preceded by Dutch gentlemen of like turn of mind; and in Massachusetts, particularly around Boston.

Porcelain services brought over from China at the end of the 18th Century graced some of the fine estates of New England, Virginia, and Maryland, and were seen here and there in the Carolinas and Georgia.

The Washingtons of Mount Vernon had a number of pieces of Canton-made blue and white willow pattern, Nanking blue and white, as well as some of the celebrated “Butterfly Border” pattern, marked with the insignia of the Cincinnati Society and drawn in pastel tones with a delicacy and skill uncommon among Chinese artists.

The Jeffersons of Monticello had a Chinese set made to order, bearing the family crest and initials, and bordered with blue and white bands. Another exceptionally fine service, with a broad blue enamel border and bold gold scrolls, was purchased by Charles Carroll of Maryland.

Opulent as the Oriental services appeared, they were far less expensive than English porcelain ones of like size and quality. Not only was the cost of the ware relatively low in Chinese marts, but because of the difficulty in obtaining profitable return loads from China, shipowners were willing to pare rates as an inducement.

By contrast, ships returning from Europe were heavily laden. A further advantage was the comparative durability and heat-resistant qualities of the Oriental product, though because of its icy brittleness it was more apt to chip than the softer English ware. 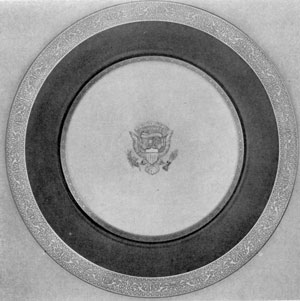 Service Plate from Wilson Service: The borders are of etched gold and the rim of cobalt blue. The President's seal in the center is of raised paste and gold.

After the War of 1812, the trade in Oriental porcelain assumed still greater proportions and great quantities of the popular blue and white Canton willow pattern were carried by ships engaged in the China trade. Demand for the finer porcelain of Nanking, with its more delicate blue and carefully drawn designs, was less heavy, but a fair selection of Nanking vases and ornaments, blue and white and variegated, came in with the Canton pieces.

Upon arriving at his home port, it was customary for the master of the ship to advertise his cargo and announce the date at which it would be sold at auction. The sales were popular; bidding was spirited; and within a decade or two, Chinese porcelain, especially blue willow, was well distributed along the Atlantic coast.

This trade continued to flourish throughout the 19th Century, but toward the end, the quality of china deteriorated noticeably. Neither modeling nor drawing was as precise as it had been earlier in the century. The blue was muddier and the bottom surfaces of the flatware were so rough that dealers customarily ground them, lest they scratch the polished furniture or scuff the delicate damask tablecloths of their customers.

Although English decorative items appear to have been fashionable in the period between the American Revolution and the War of 1812, wealthy Americans preferred French china. Besides his Lowestoft, President Washington owned a French service with a simple scattered spray decoration in yellow, blue, green, and gold, made about 1786. Most of Benjamin Franklin’s china was also French. 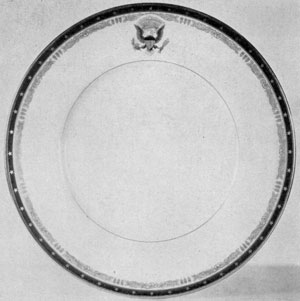 Designed by Franklin Delano Roosevelt: In this White House dinner service the outer border is under mat cobalt blue with gold stars. The motifs of the inner border are a rose and three feathers adapted from the Roosevelt coat-of-arms. The Presidential seal, also on the rim, is executed in colors.

After the War of 1812, the use of English china in America increased. This may be ascribed to our rapidly growing merchant marine. In a few years our young nation led all others in its fleet of commercial vessels, and it maintained its ascendancy until steam replaced sails and iron hulls were introduced.

Staffordshire potters made the most of this and their earthenware made for American trade was much in demand. However, the preference for French china persisted with wealthy Americans. French services bought by the Presidents were in excellent taste during the first half of the century, but during later years deteriorated in quality and style. President Lincoln’s service was decorated with a most unusual dark lilac color with a gold designed border, and the arms of the United States in the center.

President Hayes, more original than most, used a service with plates of various sizes and designs for different purposes. Some were decorated with American wild animals, others with native wild flowers, and still others with seascapes. The service used by President Arthur was almost as startlingly colorful and varied. Some of the pieces were English-made, but most of them came from France.

President Cleveland departed further from tradition by having the majority of his sets made in England. He had no large single service, but chose to vary the design and coloring of the china for each course.

President Theodore Roosevelt was the first to order a complete service of English china and it was characterized by a dignified austerity. Wedgwood, who made it, adopted a simple colonial motif. Two designed gold borders were traced on the rims of the plates with a series of straight parallel lines between. A round reserve on the rim bore the Great Seal of the United States in natural enamel colors. This service was also used during the Taft administration. 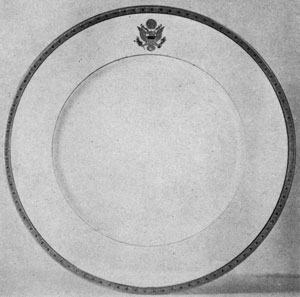 President Wilson established a precedent by commissioning the Lenox works at Trenton, New Jersey, to supply a large service for formal White House dinners. Its pattern was again marked by dignity and simplicity. At the outer rim was a broad decorative band of etched gold. A similar but narrower band followed the verge. Between the two was the Presidential Seal in the middle of each plate. This service was also used by Presidents Harding, Coolidge, and Hoover.

President Roosevelt ordered another Lenox service in two-toned ivory, gold edged, with a narrow cobalt blue rim band bearing forty-eight gold stars. Within this is a flat gold decorative band with alternating Tudor roses and groups of three vertical feathers, a motif adapted from the Roosevelt coat-of-arms. The rim also bears the Presidential Seal in colors.

But to go back to the porcelains imported here during the 19th Century: it was not until the Philadelphia Centennial Exhibition of 1876 that a significant change in American taste began to take place. French, German, Italian and Japanese wares were exhibited, and for the first time the work of outstanding English potters was shown. Stay-at-home Americans at length had an opportunity to see English porcelains and many found their taste to be more closely akin to the English than to that of other people.

English faience makers were also well represented at this exhibition. There were some French exhibitors and forty-odd Japanese. In fact, Japanese influence in the decoration of pottery was marked at this period. Scarcely a half dozen years after Commodore Perry re-introduced Japan to the western world in 1852, the Japanese exhibited their pottery at a London World’s Fair. An interest in their decorative motifs flared up immediately in England and on the continent. 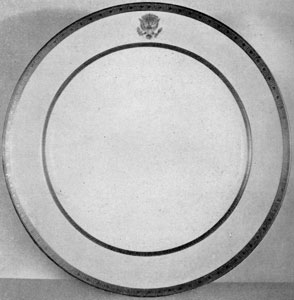 Plate from the Wilson Service: This White House dinner service was decorated with etched gold borders and the presidential seal of raised gold paste. The service was also used during the Harding, Coolidge and Hoover administrations.

Ceramic artists, eager to produce something novel regardless of its suitability, tried to adapt this strange Oriental style to their purposes. The marriage was an unhappy one and as a result Japanese-inspired pottery decorations from the 1850s to the 1880s had little artistic merit.

As little porcelain was produced in Japan at this period, European china manufacturers were fortunately less affected by the fad. Meanwhile in America, English china, though increasing in popularity, failed to dislodge French porcelain from its position in the esteem of wealthy Americans. French table items made in the 1880s were lightly potted, of pleasing shape and artistic decoration. Rims of solid color in various shades of green, crimson, shell pink, and robin’s egg blue prevailed.

During this time, old established American dealers sought to arouse interest in English china. Gradually some of their clients were weaned from French porcelain and American taste underwent a change. As the demand for the French product waned its quality decreased. In 1893 another World’s Fair, the Chicago Columbian Exposition, gave further impetus to the trend towards English porcelain. French, Meissen and Royal Berlin wares were prominently displayed, but it was the English porcelain and pottery that attracted greatest attention. From then on the preference for the porcelains as well as the earthenwares of England grew steadily in America.