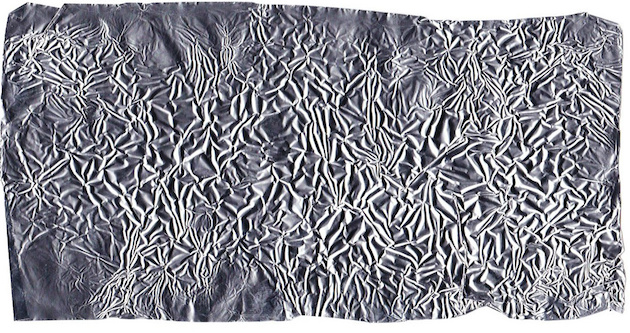 One of five pieces of foil from the Apollo 11 lunar capsule David Porter II’s father sent to his family on July 24, 1969, the day of the splashdown. Click here to see the celebratory envelopes.

On the 50th anniversary of the Apollo 11 Lunar Mission, there will naturally be much well-earned fanfare around the first men to walk on the surface of Earth’s moon, American astronauts Neil Armstrong and Edwin “Buzz” Aldrin, who took their “giant leaps for mankind” on July 20, 1969. But when it comes to epic historic moments like that one, it takes a village, from “hidden figures” like Katherine Johnson calculating the rocket’s trajectory to the NASA scientists and technicians monitoring the flight on the ground at the Apollo Mission Control Center in Houston.

“The capsule foil is the most surreal. You hold it in your hand and just imagine that it’s been orbiting the moon.”

Just as vitally important to the “man on the moon” mission were the U.S. Navy men serving on the U.S.S. Hornet, who were charged with plucking the three NASA astronauts—Armstrong, Aldrin, and Michael Collins—and their space capsule containing 47.5 pounds of priceless lunar samples from the Pacific Ocean when they returned to Earth on July 24, 1969.

David Porter II’s late father was one of those seamen who helped recover America’s space heroes and their historic research on that auspicious summer day 50 years ago. Porter, who lives in Nacogdoches, Texas, and posts on Collectors Weekly’s Show & Tell, shared his dad’s artifacts—like pieces of foil from the Apollo 11 capsule—and recollections of that day with us. 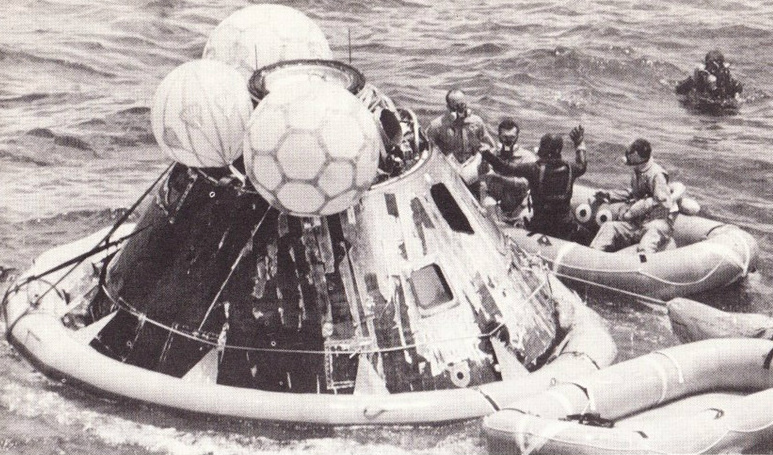 A photo from the “Splashdown Weekly” account of the Apollo 12 landing. It was captioned: B.I.G. SWIMMER, LTJG Ernie Jehnke signals the crew of helicopter 66 that all three astronauts are aboard the life raft, and the Billy Pugh Net can be be lowered. Each man was then lifted via the net into the waiting helo, and carried to Hornet’s flight deck. (NASA photo by PH2 Larry Menze)

Here is Porter’s story in his own words:

“The Hornet was rescued from the scrap heap and made into a museum in 1998. It’s currently dry-docked in Alameda, California. Buzz Aldrin was the principal speaker the day the U.S.S. Hornet Sea, Air & Space Museum opened. My father has his name on a board on that old ship—a place I would like to visit one day.

“He was really proud of being able to serve during the Apollo program. He was a big science-fiction fan and grew up reading ‘Flash Gordon’ and watching movies like ‘Commando Cody’ and such. So it was very exciting for him to be a part of such a historic time in space history.

“The Hornet always had direct communication with NASA. It was a very thought-out process of recovery. The whole thing was super precise, so they knew where the capsule would splash down. He was the one who shot the line from the ship to the Apollo 11 capsule after splashdown to pull the capsule to the ship. 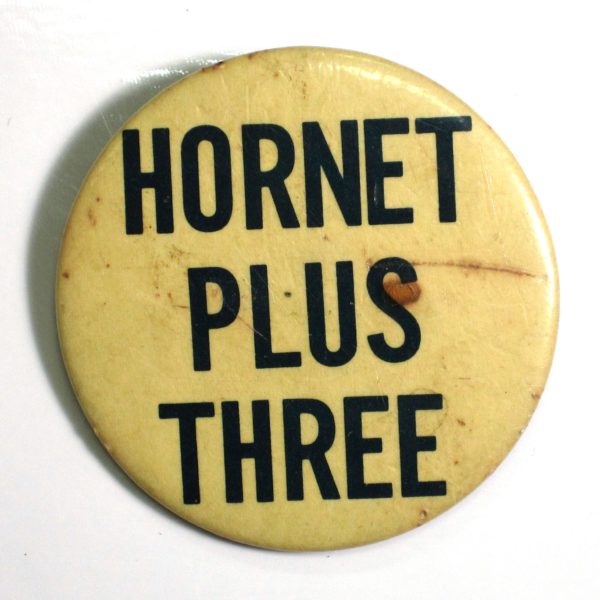 “Something not a lot of people know is the men on the Hornet trained for weeks retrieving a dummy capsule in preparation for the actual day. When the day arrived, the radio comms to the astronauts were piped through the ship’s intercom so all the sailors could hear. I believe my dad said he saw the “burn in” and the splashdown, though it was overcast that day. The first time he spotted the capsule, it was floating down through the clouds with the parachutes all deployed.

“The crew was ordered to stay below deck when President Nixon came aboard. There was a lot of excitement, with television crews and the captain and officers meeting the president, though my father didn’t get to talk to him directly. However, that night after everything died down, he took a walk to the quarantine. NASA put the astronauts in quarantine because the scientists didn’t know if the astronauts had brought anything back from the moon such as illness or microbes. Turned out, Neil Armstrong was still up and sitting near one of the observation windows. I believe my father said ‘That was a hell of a ride, wasn’t it?’ and Armstrong replied ‘Sure was!’

“The buttons in those pictures that read ‘Hornet Plus Three’ were indeed referring to the three astronauts from Apollo 11. When they picked up Apollo 12, the buttons were updated to ‘Three More Like Before,’ of course, referring to Apollo 11.

“All of the NASA collectibles I inherited from my dad are amazing to have and look at. I have his Department of Defense certificate framed on the wall. However, the capsule foil is the most surreal. You hold it in your hand and just imagine that it’s been orbiting the moon. This little piece of foil was a part of something so important in human history.” 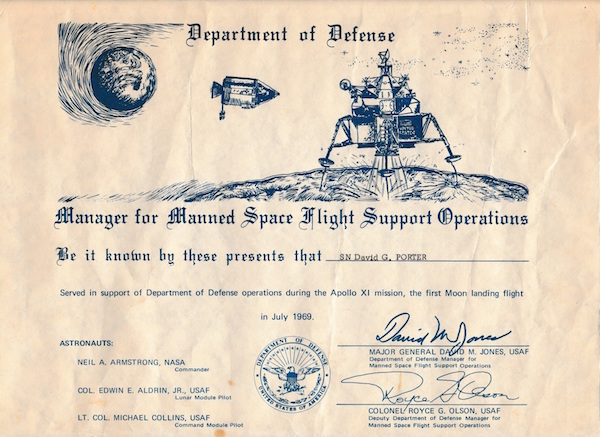 A certificate from the Department of Defense awarded to Porter’s father in his Navy days for his role in the recovery of the Apollo 11 capsule. (Courtesy of David Porter II)

NASA’s second lunar mission, Apollo 12, launched on November 14, 1969. This time, Richard F. Gordon manned the capsule while Charles “Pete” Conrad and Alan L. Bean brought the first color TV camera to the surface of the moon. The pair also recovered parts of the unmanned Surveyor 3 probe, which was sent to the moon in 1967.

“Turned out, Neil Armstrong was still up and sitting near one of the observation windows. I believe my father said ‘That was a hell of a ride, wasn’t it?’ and Armstrong replied ‘Sure was!’”

Porter’s father was also a part of the Apollo 12 recovery when the capsule splashed down near Pago Pago, Samoa, on Thursday, November 24, 1969, three days before Thanksgiving that year. Among his father’s memorabilia are the post-recovery Hornet-Apollo 12 Thanksgiving menu and the moment-by-moment military plan for the splashdown recovery mission, as well as a lighthearted and typo-filled Navy newsletter that describes in detail the logistics involved in retrieving the moon men and the Apollo 12 command module called the “Yankee Clipper.”

Despite all the sci-fi anxiety around space robots and little green men, NASA scientists were much more concerned about alien life-forms of the microscopic variety, like bacteria or toxic particles that could bring space disease to the humans of Earth. Hence, the returned astronauts had to spend 21 days in quarantine before they could high-five other Americans. 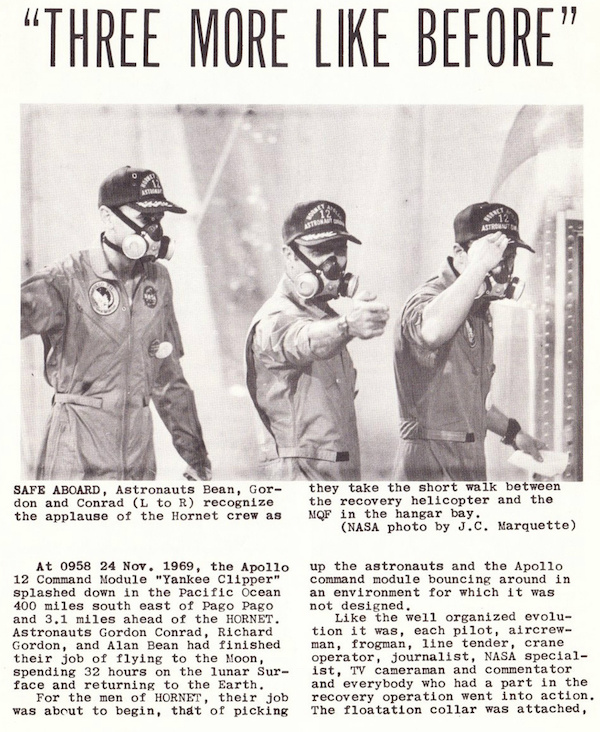 “At 0958 24 Nov. 1969, the Apollo 12 Command Module ‘Yankee Clipper’ splashed down in the Pacific Ocean 400 miles south east of Pago Pago and 3.1 miles ahead of the HORNET. Astronauts [Charles] Conrad, Richard Gordon, and Alan Bean had finished their job of flying to the Moon, spending 32 hours on the lunar Surface and returning to the Earth.

“For the men of HORNET, their job was about to begin, that of picking up the astronauts and the Apollo command module bouncing around in an environment for which it was not designed.

“Like the well organized evolution it was, each pilot, aircrewman, frogman, line tender, crane operator, journalist, NASA specialist, TV cameraman and commentator and everybody who had a part in the recovery operation went into action. The floatation collar was attached, life rafts were inflated and the whole routine of events were checked off minute by minute as the recovery proceeded on schedule.

“Routine was the way it was described, and routine it was. After many days of practice with the dummy boiler plate capsule in seas foul and fair, the men of HORNET were ready and eager for a try at the real thing.

“[Text missing] … and the three astronauts climbed into the bouncing life raft and waited as the recovery helicopter hovered overhead. The Billy Pugh net was lowered and one by one the three Navy Commanders were hoisted into famous Six-six [Navy Helicopter 66].

“A short but thorough physical examination was given to the astronauts while still airborne and then the Sea King helo of HS-4 [also Navy Helicopter 66] landed on the HORNET’s flight deck. After being lowered to the hangar deck, the helo was towed into position next to the Mobile Quarantine Facility. The steps were set in place and out stepped the three astronauts who waved greetings to the delegation of admirals and senior officials. The astronauts then walk into the MQF, where they were given a complete medical examination while ‘Yankee Clipper’ was brought aboard HORNET. They were interrupted for a few minutes by a long distance telephone call from President Nixon in the White House. The Commander-in-Chief congratulated the three spacemen, then said he was promoting all of them to Captain. Conrad, Gordon and Bean were visibly surprised and delighted by the news.

“A short ceremony followed their homecoming: an interview with Admiral John McCain, Jr., Commander-in-Chief Pacific [the father of late Senator John McCain], who asked the astronauts about their problems with the powdery moon dust and spaceage cookery. Captain Seiberlich then presented each of the astronauts several momentoes of their stay on HORNET. A Thanksgiving Service was given by HORNET’s Chaplains, LCDR John Piirto, and LT Francis Haryasz to conclude the ceremony.

“Later in the afternoon the precious cargo of lunar samples, film, and pieces of the Surveyor spacecraft which landed on the moon two and a half years ago were flown off to the Space Center in Houston for study.

“HORNET will now return to Pearl Harbor where the Mobile Quarantine Facility containing astronauts Charles Conrad, Richard Gordon, and Alan Bean, will be transferred into a giant C-141 Starlifter and flown to Houston. The astronauts will then complete their 21 day isolation in a much larger facility there.” 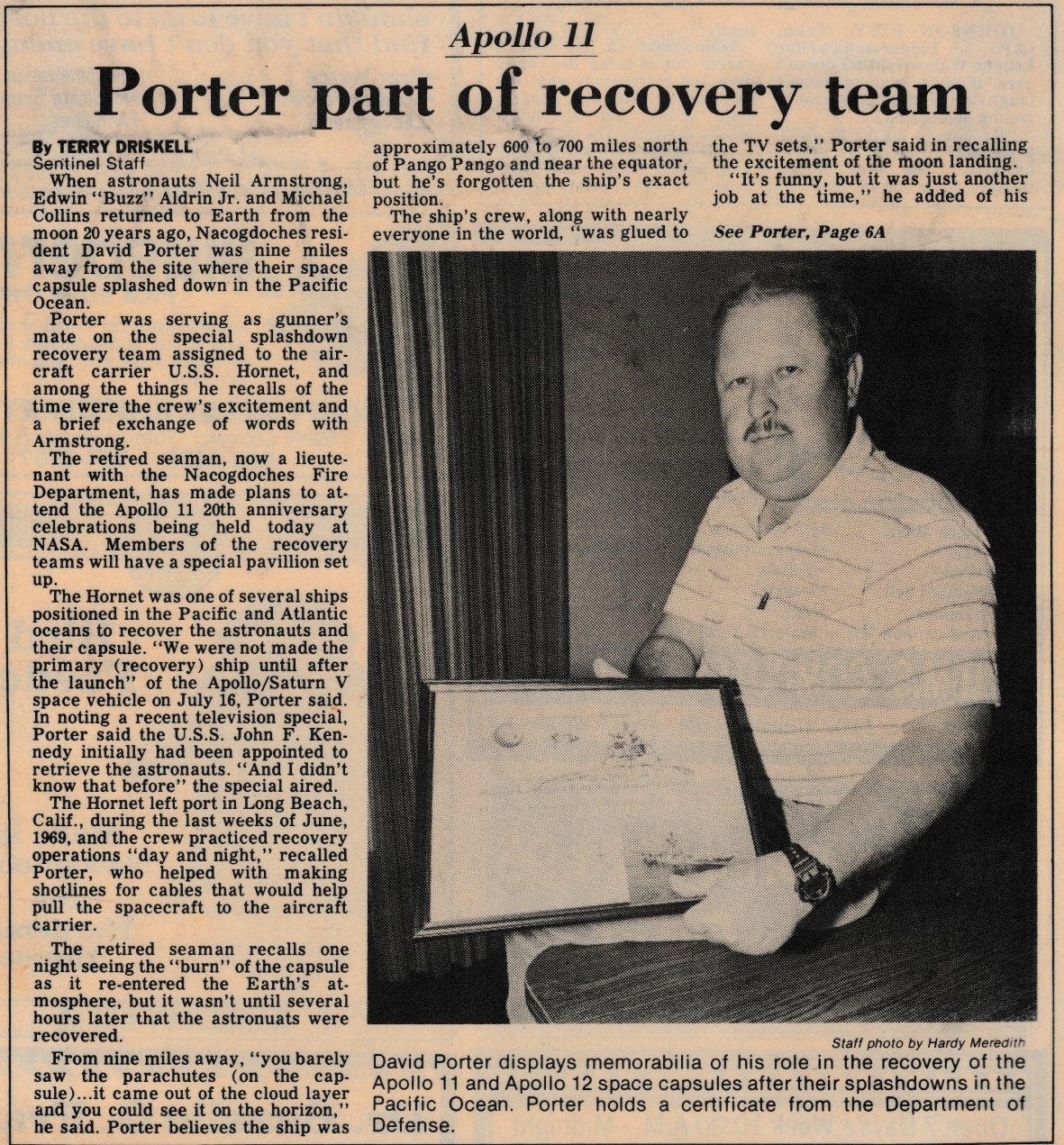 David Porter, Sr., pictured with his Department of Defense certificate, was also featured on the front page of the July 20, 1989, edition of “The Nacogdoches Daily Sentinel” for the 20th anniversary of the Apollo 11 Lunar Mission. (Courtesy of David Porter II)