Before Camping Got Wimpy: Roughing It With the Victorians

The great cities of the West weren’t even complete before urban dwellers fantasized escaping them. Compelled by sublime landscapes and the conservationist bug, 19th-century city slickers saw camping as a way to ditch the daily grind, plunging into the wilderness their forebears had just conquered. And after a century of high-tech camping innovations, from Gore-Tex hiking boots to smartphone apps, our desire to “rough it” is virtually unchanged.

Recreational camping first became trendy in the late 1800s, popularized by the exploits of naturalist John Muir, who wrote extensively during his years living in Yosemite beginning in 1868. Remarkably, this was only twenty years or so after troubled wagon trains languished in barren deserts or frozen winter climes on their journey to the frontier (think Donner Party). Civilization was barely established in the western U.S. when “citizens were already seeking a respite from it,” observes U.C. Berkeley librarian and author Susan Snyder in her book Past Tents: The Way We Camped.

From the get-go, journalists were all over the story. Popular essayist Charles Dudley Warner’s “In the Wilderness” series, published in 1878 in The Atlantic Monthly, presented camping as a blissful escape from the obligations of civilized society. “I suspect that many of us are, after all, really camping temporarily in civilized conditions; and that going into the wilderness is an escape, longed for, into our natural and preferred state,” wrote Warner. This camping impulse helped inspire the campaign to create America’s first National Parks.

Top: Turn of the century campers enjoy simple pleasures out of doors. Above: Teddy Roosevelt and John Muir in Yosemite, 1903.

The movement was hardly fringe: Public figures like future-president Theodore Roosevelt, conservationist John Muir, and industrialist Stephen Mather worked together to create an organized system of national conservation. Peter Fish, Editor-at-Large for Sunset magazine, says they encouraged Americans “to get out into the wilderness for the preservation of their sanity and their souls.”

California proved the perfect spot to develop a national dialogue on conservation, and one place this discussion unfolded was in the pages of Sunset. Founded in 1898 as a kind of in-flight magazine for the Southern Pacific Railroad to lure travelers westward via train and ultimately entice them to purchase real estate (Southern Pacific was the largest landowner in the West), the magazine promoted California as an exotic natural paradise, an “outdoor wonderland” as Fish describes it. Early Sunset contributors touted the region’s idyllic natural imagery at a time when “the big industrial cities of the East were perceived as being unhealthy or stressful.”  Their antidote to this poisonous urban blight? Going camping.

“Ordinary people discovered that, wow, you don’t have to be a masochist to get out there.”

At the turn of the 19th and 20th centuries, many families camped in relative luxury, traveling on modern railways to arrive at a site with fully furnished tents already erected for them, not unlike the mobile home vacationers of today. But in a 1902 issue of Sunset, author Katherine Chandler provided a series of tips for more primitive camping in California, mixing practical advice with romantic interludes on life in the wilderness.

Chandler was part of a growing crowd that preferred their holidays far removed from urban amenities such as roads and running water. These early campers usually hired a team of pack horses or burros, and knew the value of streamlined packing, especially in a day when women wore full-length skirts regardless of the occasion and were expected to carry whatever wouldn’t fit on their horses’ backs.

A mule-train climbs a mountain path in Colorado around the turn of the 19th and 20th centuries.

Chandler’s camping recommendations stuck to the basics: food, clothing, and shelter. For a full month’s tramp (who today even gets that much time off!), she recommended women pack only two short skirts, a warm jacket of corduroy or denim, a cape or heavy shawl, bloomers and leggings (that match), a sun hat, a few dark-colored shirts, some good gloves, a nightgown, two pairs of underwear, comfortable shoes to wear around the campsite, and a sturdier pair “with a thick sole containing Hungarian nails, for tramping.” Chandler admits that though she’ll look charming at the start, after a month out of doors it will take “all the courage of her new-gained health” to face the return to civilization.

Her food provision list was equally detailed (eg: 8 pounds of prunes, 12 cans of milk), with the total cost to feed five adults for one month coming to just under $35. Adjusted for inflation that’s around $200 per person; not a bad deal. Meals were made from simple cornmeal grits, pasta, or rice topped with canned tomatoes and grated cheese. Throw in a little bacon or freshly caught fish, and you had dinner. Other snacks included a cracker-type bread called “hard tack” and some dried beef (aka beef jerky); for the vegetarians, dried beans worked fine. 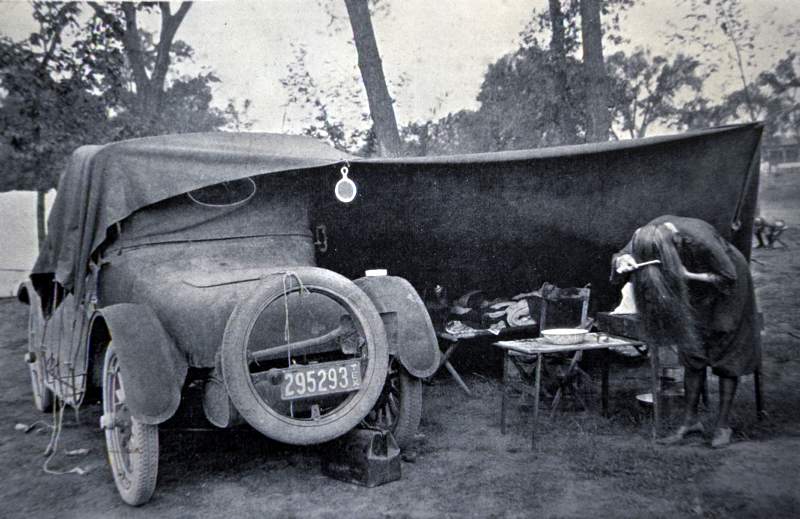 A car camper does a little rustic grooming in Rocky Mountain National Park during the 1920s.

What about those bulky picnic tables and folding chairs? Chandler wrote that it depended on the immediate environment, but boulders work perfectly well as tables, while stools can be fashioned out of old logs. And if you’re just stopping for a brief rest, “one reclines on the bosom of Mother Earth.” Though Chandler’s group didn’t have zippers or synthetic fabrics at their disposal, they still used sleeping bags, “made of either blankets or comforters folded in two and sewed together all around but on part of one side.”

Once automobiles became more available and affordable, they quickly replaced pack mules. Car camping became the preferred method of escape, particularly because of the piles of tents, stoves, cots, lanterns, ice chests and other gear required for longer stays. During the first half of the 20th century, even soft goods like sleeping bags and clothing were a chore to pack and tote, since they were made from heavy canvas, cotton, or wool.

According to Bruce Johnson, an expert on the evolution of outdoor equipment who runs the History of Gear Project, the invention of nylon in 1935 forever changed the world of camping. Its usefulness was first demonstrated during World War II, when the U.S. military found new applications for the product in parachutes and weather-balloon cloth. By the end of the war, camping equipment innovators like Gerry Cunningham and Roy and Alice Holubar had taken notice, using nylon in their designs, which “changed gear from horse-packable to back-packable, and clothing itself entered a new era of warmth and lightness,” says Johnson.

Man versus car:  automobile camping boomed during the ’40s and ’50s, so much that travelers faced traffic even in the high Sierra. At right, a backpacker poses with Harvey Manning’s suggested supply list from the 1972 book “Backpacking One Step at a Time.”

The companies started by these individuals, Holubar and Gerry Mountaineering, paved the way for a slew of businesses launched in the 1960s, mostly across the western United States from Colorado to Oregon. “Gear became ever lighter, stronger, more compressible, and more resistant to mold and mildew,” explains Johnson. And backpacking suddenly became trendy, as “ordinary people discovered that, wow, you don’t have to be a masochist to get out there.”

These brands helped return camping to its roots, focusing on experiencing the natural world with only the most basic tools you could carry. This do-it-yourself mentality eventually led Gerry Cunningham to publish an instructional booklet called Lightweight Camping Equipment and How to Make It, and soon full-fledged businesses were launched, like Frostline, which produced self-contained kits for making backpacks or parkas. This coincided with a larger social shift during the ’60s and ’70s, when people longed for a return to the simple pleasures of outdoor life, rather than dragging their household amenities out into the wilds.

Cunningham was especially interested in the science of wilderness living, working for years with the Air Force to develop specialized equipment for outdoor uses. In 1972, he published another influential booklet entitled How To Camp and Leave No Trace, a culmination of camping’s growing popularity and increasing environmental awareness. The pamphlet countered trends of technological and consumptive excess, and explained the tenets of backpacking without disturbing your environment. Cunningham’s “Leave No Trace” ethic has now become an international campaign, helping establish public guidelines for appropriate behavior to sustain our natural parks.

While our earliest camping ancestors probably wouldn’t have put their trips in these same terms, they essentially advocated this style of minimalist camping. Peter Fish notes that the motives for our outdoor adventures remain essentially the same. Like Chandler’s tramping party of 1902, we still want “to get out of the city, out of pollution, and into a place where you’re not distracted by manmade objects, a place that forces togetherness with family and friends, where you can be inspired by nature.”

Indeed, Chandler’s final description of nightfall in the campground still rings true today: “All face the mysterious stars, and a peace descends on the camp and permeates to the heart of each watcher. Every pulsation brings calm; and if such a thing as nerves ever existed, they are softly lulled into quiescence.” 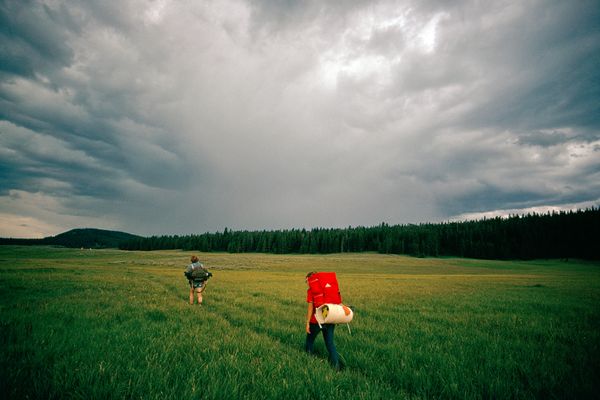 This image from 1972 of campers in Yellowstone National Park epitomizes the ideals of lightweight backpacking popularized during the 1960s. Source: National Geographic.

Tough Cookies: The Treats That Fueled a Century of Girl ScoutsThe Bromance, Found in Vintage Photography