This article on Bible boxes discusses their use as a writing surface and case for writing materials and describes their gradual evolution into a desk. It originally appeared in the November 1942 issue of American Collector magazine, a publication which ran from 1933-1948 and served antique collectors and dealers.

“I must write rudely,” stated Thomas Dudley of Massachusetts Bay colony in a letter to the Countess of Lincoln in the year 1631, “having no table, or other room to write in than by the fireside upon my knee, in this sharp winter; to which my family must have leave to resorte, though they break good manners and make me many times forget what I would say and say what I would not.”

Illustration I: American Bible Box: Made about 1650, it is of oak and ash with characteristic shallow carving on front. The initials M. H. are those of the original owner.

As he wrote this, less than a year had elapsed since the first sizable group of Puritans had arrived from England and settled along the Charles River. Consequently the apparent incompleteness of house and furnishings was not surprising. It is to be noted, however, that in spite of other lacks, the worthy deputy governor had writing materials at hand and it is probable that he had brought them across the Atlantic in a small oaken container hinged at the top and secured with a heavy iron lock.

Known as a Bible box, it was an important item in English households of the Tudor and Jacobean years. Most households had one which was kept on a shelf or side table when not in use. A product of the joiner’s skill, as were other furniture forms of the 17th Century, it was made primarily to hold one of the folio sized Bibles of the period and since there was room and to spare, writing materials, valuable papers, and other small items of importance were usually included.

The average size was about eight inches high, two feet wide, and sixteen inches from back to front. Those of English provenance were of oak and rather lightly constructed. They were really miniatures of the large chests in use during these years, even to the conventional carving on the front. Rarely was there any carving on the sides and since the top was used for the writing surface, it was also plain, except for a thumbnail molding which projected beyond the front and sides. The top and bottom of the American-made examples were frequently of pine or other soft wood. With the one shown here (Illustration I) the sides are of oak, the top and bottom of ash. In addition to the shallow carving on the front, the initials of the owner appear beneath the massive lock. 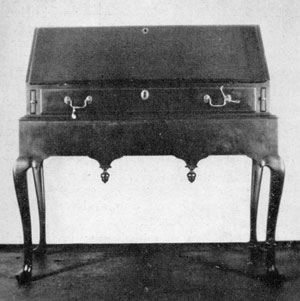 Illustration II: Queen Anne Desk on Frame: Made about 1720, the writing lid folds outward and rests on sliding bracket supports. The finials of the apron are reminiscent of the earlier period of William and Mary.

Although carving was the usual form of ornamentation, the latter part of the century produced a few with decorative paneling. Painted designs also occurred in colors and patterns similar to the larger chests. The decorative effect is often quite beautiful with these little boxes.

Just when Thomas Dudley and his contemporaries got tired of putting their Bible boxes on a nearby table, joined stool, or even in the lap, when attending to their correspondence, is not certain, but it was an age of letter writing and diary keeping, both in England and America. Pepys and Evelyn were jotting down their views of daily events from the time of the Restoration on.

On this side of the Atlantic, Governor William Bradford began writing his History of the Plymouth Settlement just ten years after the first Pilgrim came ashore. It took him twenty years to finish it. Judge Sewell kept a journal that omitted practically nothing of everyday happenings and Cotton Mather kept up a similar running commentary. Postal service was far in the future, but quill pens raced across the pages, inditing lengthy and numerous letters to friends left behind in the mother country. 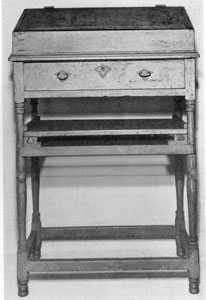 Illustration III: Early American Standing Desk: Made of pine before 1750, it was first used by Gyles Merrill, class of 1752, Harvard. Later by James Merrill and other descendants.

In time, someone thought of a more convenient writing arrangement and a box with a slanting lid was the result. This was about the middle of the 17th Century. Except for the fact that the lid sloped upward and away from the person using it and was hinged on the high side, it was not essentially different from the earlier boxes. But it was a start, and compartments for paper, quill pens, inkpots, and sand boxes soon followed. The writing box was now slightly larger with sides as well as front decorated with shallow carving. Then it occurred to someone that a drawer beneath the writing compartment would be a convenient detail and the box was made somewhat deeper to accommodate it.

Like the small, mahogany writing boxes of the Sheraton and Empire years, however, it was still a device to be picked up and carried around. Naturally the next step was to make the box larger and construct a frame of turned uprights and square cross members especially for it. Since this evolution of the writing box occurred in the Jacobean period, the framework was structurally along the lines of the joined stools and early tavern tables. Frame and writing box were separate pieces, but the ensemble was now a desk and well on its way toward the more elaborate forms on which the cabinetmakers of the 18th and early 19th Centuries demonstrated their skill and ingenuity. It was already more a piece of cabinetry than of joiner-carpentry. The size had increased and sometimes a drawer was added to the frame. (Illustration IV.) 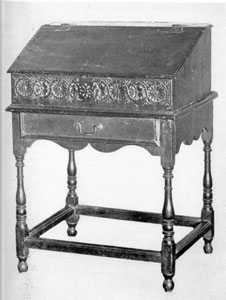 Illustration IV: Early Desk on Frame: This piece is of oak with lid hinged at top. The frame is similar to the early tavern table in construction

In England both the flat and slant top writing boxes on stand appeared about the middle of the 17th Century and in many cases were used both as reading and writing tables. One slant-top example mentioned by Fred Roe in his book, Old Oak Furniture, is decorated with a simple tulip design and also bears the name of the owner, Robert Baker, and the year, 1660. It is believed to have come originally from Stratford-on-Avon, where it was made for one of the Baker family. The latter was related to the Hathaways of Shottery, one of whom was named Anne.

But human ingenuity was far from finished with the writing box, so lately become a desk. It now appeared that holding a sizable desk lid with one hand and fishing around underneath it for writing materials was not too satisfactory. So the slanting lid was hinged at the bottom and the angle of its slope increased. (Illustration II.) 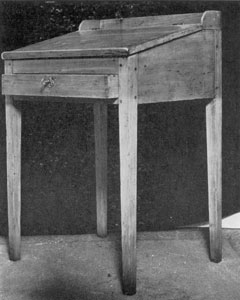 Illustration V: Schoolmaster's Desk of Pine: This may have been made as late as 1840. Frame and desk are no longer separate. The legs are clumsy interpretations of the Hepplewhite style.

This type of desk appeared shortly after the turn of the 18th Century. The example shown here is of the Queen Anne period of course, as shown by the cabriole legs and deep apron of the base. Here again, desk and frame are separate pieces. Other desks with tavern table base were also made during these years. The more elaborate had the lid hinged at the bottom; simpler types reverted to the earlier form. Some had a drawer in the upper section; some were made with a second one placed in the top of the supporting frame.

Although the slant-top desks and secretaries were popular with all who wanted a handsome and commodious piece of furniture, the simple desk on frame design persisted and became the model for a long line of schoolmaster and countinghouse desks until the middle of the 19th Century. Most of them, like the schoolmaster’s desk shown here (Illustration V), had a lid hinged at the top. It will also be seen that the various style periods affected it both ornamentally and structurally. Late examples like this one were made in one, rather than in two parts. But even here the Bible box origin is still apparent.

Even more marked was the family resemblance in the countinghouse or standing desks. (Illustration III.) With these the frame on which the desk rested was so tall that the person using it must either mount a high stool or stand up. 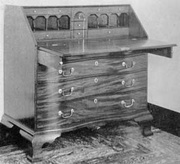 BiblesAs the most widely read book in Western civilization, the Bible offers a va…