This article describes portable writing desks, from their materials to their design, and notes their history and their uses. It originally appeared in the May 1943 issue of American Collector magazine, a publication which ran from 1933-1948 and served antique collectors and dealers.

During the latter half of the 17th Century and the whole of the 18th, a period often referred to as the golden age of letter writing and diary keeping, penmanship reached a perfection never before nor since surpassed. Letters in longhand, written on handmade paper with quill pens, travelled back and forth across the continent, the British Isles, and to and from the American colonies in ever increasing numbers. 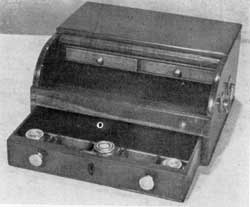 Lady's Mahogany Tambour Ink Stand: While this one has no inlay, others of the same general design were richly decorated with delicate inlay on the drawer fronts and were bound with brass. Sometimes they had brass feet and others also brass fretwork around the edges of the top.

To accommodate this great volume of writing it was necessary that new pieces of furniture come into existence or that old ones be adapted for the purpose. Bible boxes, about which much has been written, came to be used not only for storing the family Bible but also for holding implements of writing and as a solid rest upon which to write firmly and legibly. Many of these boxes were provided with slant top lids and some were even placed upon stands.

As more and more people took up the art of writing, more elaborate equipment was demanded. The larger desks, which are so highly prized by collectors today, were admirably suited to the purpose, but were somewhat expensive and therefore not afforded by everyone who wished to express his thoughts and opinions on paper or parchment. Moreover, the full-sized desks were not convenient to move from room to room, nor were they adapted to travelling. 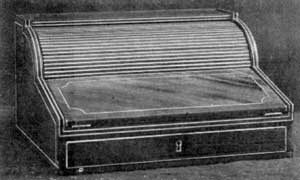 Hepplewhite-Sheraton Tambour Desk: Made of mahogany with holly inlay it is a gentleman's desk. Size 14 3/4, by 12 1/4 by 8 1/2 inches. Generally such desks were elaborately decorated with inlay but a few such as this one had a simple yet dignified inlay pattern.

Thus there came into existence portable desks patterned after the Bible boxes but much more elaborate in construction and diversified in designs, and, incidentally, more practical. The smaller examples of these newer desks, because of their diminutive size and sloped writing surface, were convenient to hold on the lap while the writer toasted his feet before an open fireplace on cold winter nights, or when writing while in bed. The larger ones, frequently referred to as “gentlemen’s desks,” usually were placed on a table or stand.

The earliest authentic cabinetmaker’s illustrations of portable writing desks that have come to our attention are to be found in Thomas Shearer’s Designs for Household Furniture, London, 1788. Some of these designs were later reproduced in the cabinetmaker’s London Book of Prices, second and third editions, London, 1793, 1803, perhaps also in the first edition published in 1788, to which Shearer contributed twenty plates. We cannot be sure of the latter, however, since we have not seen a copy of the first edition. 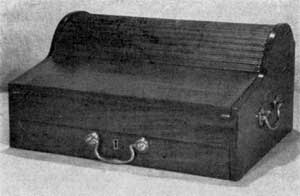 A Desk Probably by Phyfe: A gentleman's desk by 11 by 7 1/2 inches made of mahogany, it was obtained from an Old Princeton, New Jersey, family for whom Phyfe is attributed to have made much furniture. The under surface of inner writing flap bears a number of signatures with dates. The earliest is June 12, 1810 or 1800.

The purpose of the London Book of Prices, it was stated, was to provide the cabinetmakers of the time with a list of standard designs and a standard list of prices. It is therefore probable that portable writing desks had been in existence for some time before the publication of these works. As a matter of fact, some were listed as having a solid cylinder roll top in place of the tambour, which would date them not earlier than 1750, for the cylinder style “roll top” preceded the tambour by several years.

The four Shearer designs are reproduced here from Plate 17 of the second edition of the Cabinet-Maker’s London Book of Prices. Two of these are of the rectangular, slanting lid type; the other two are tambour ink stands. It seems likely that these small ink stands were originally designed primarily for milady’s use as decorative receptacles, not only for writing materials but also for dressing and sewing accessories. 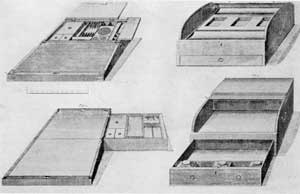 Four Portable Desk Designs by Thomas Shearer: This is Plate 17 of the 1793 edition of The Cabinet-Makers London Book of Prices. It shows four such desks, two oblong hinged boxes and two with sliding tambour fronts or tops that when opened gave access to time interior. Figures 1 and 2 are at the top of this plate and figures 3 and 4 at the bottom.

Nevertheless, some of them served as complete writing desks, for the removal drawer was fitted with a writing board and thus could be held on the lap or placed on a stand at the convenience of the writer. In the 1793 edition of the London Book of Prices a description is given of a mahogany tambour ink stand, similar to Fig. 4 in Plate 17, and it stated that “if a flap to cover the paper, hing’d” is added as an extra, the charge will be one shilling. In this particular desk, the hinged flap probably folded forward to rest upon the open drawer and served as a solid rest for writing.

Altogether, twelve different portable desks and ink stands are described in the London Book of Prices. Evidently the purchaser had a variety of designs to choose from, the dimensions, brass mountings, inlay patterns, decorations, veneering, lining, and inclusion of travelling or sewing accessories being determined by his fancy or the state of his pocketbook. Some idea of the cost of these desks, with or without the various accessories or ornamental features, may be gleaned from the following list, which was given in the appendix of the 1793 edition: 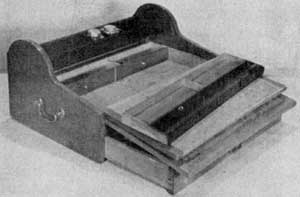 Tambour Desk in Light Mahogany: Also of the size for use by a man being 18 by 12 1/4 by 8 1/4 inches. It is shown open to illustrate a common arrangement of secret compartments in desk of this type. 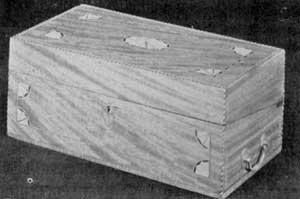 A Box-Type Portable Desk: This one follows somewhat one of Shearer's designs. Made of mahogany with decorative inlay, the lid folds back to form the sloping writing top when opened. 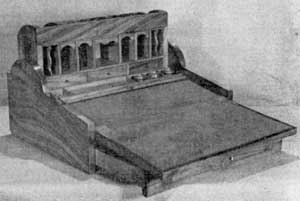 Made in China of Camphor Wood: This gentleman's tambour desk was probably copied from one of English origin. The removable center section contains drawers, pigeonholes, a pen tray and compartments.

(There are twenty-one additional extras for this desk which are not quoted here.)

Conventional-sized and portable tambour desks, showing the influence of the Hepplewhite and Sheraton School, dated about 1790 to 1810. In addition, a tambour desk of intermediate size was built upon a stand and frequently inlaid with brass or holly wood. The drawer that usually operates the tambour was built into the stand and extended across the entire front. This intermediate type is similar to the portable tambour desk in construction and design but somewhat longer and deeper.

Tambour desks are distinguished from all other types of box or portable desks frequently inlaid with brass or holly wood. The drawer that usually operates the tambour was built into the stand and extended across the entire front. This intermediate type is similar to the portable tambour desk in construction and design but somewhat longer and deeper. 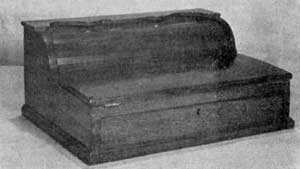 Tambour desks are distinguished from all other types of box or portable desks by the “tambour” lid made of a series of small beads of wood glued to a piece of linen or duck so as to make a flexible “roll top” or “slide.” 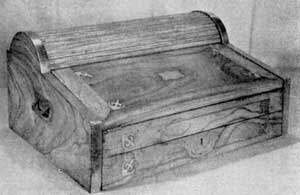 Portable Desk Made in China: Of camphor wood it has brass bindings, inlays and recessed locks and handles. The tambour top is at rear. Such desks were carried by sea captains to all parts of the world for barter. Size 19 1/2 by 15 by 9 1/4 inches.

With the portable tambour writing desk, the roll top is at the rear of the desk and usually occupies from one-third to one-half of the upper surface. It runs in grooves along the sides of the desk, and in most cases is securely fastened to the back of the drawer. Thus the tambour is rolled back by pulling out the drawer at the front, or by means of a knob or pull attached to the tambour when it operates independently of the drawer. The remainder of the upper surface of the desk is a flat slanting lid which folds forward and rests on the open drawer, thus furnishing a portion of the sloped surface. The other part of the writing flap serves as an inner lid to cover a space for storage of paper. Niches for pens, stamps, bottles of ink, and pierced bottles for sand or pounce are housed just beneath the roll top. When the desk is closed, the slanting lid is secured by the roll top which, in turn, is fastened by means of a lock in the drawer. 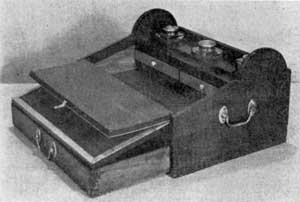 Lady's Desk with unusual Tambour Top: This is at the rear and is arched in form. Made of mahogany with edges of writing flap and the drawer fronts veneered with satin wood. Size 13 3/4 by 10 1/4 by 7 3/8 inches.

The backs of most tambour desks are delicately dove-tailed, and hidden dove-tails are used in other parts where a tightly fitted joint is required. The design of the tambour desks is better than that of the box-type desks in at least one respect. In the latter, the lid is securely glued to the sides and thus often splits or cracks as a result of the natural contraction and expansion of wood exposed to changes in atmospheric pressure. In the tambour desks, on the other hand, the lid is not glued to the sides of the desk but attached to the front by hinges and thus is not subject to severe strain during expansion and contraction. Thus, they have withstood remarkably well many years of hard usage and wear.

The better tambour portable desks show evidence of expert craftsmanship, comparing favorably in this respect with larger pieces of furniture of the same period. There is little basis for the belief held by some persons that their construction was less complicated than that of the larger desks and therefore of inferior quality. On the contrary, their small size required that more delicate craftsmanship be employed in their making.

Portable desks also played an important role in the early development, of this nation. They saw service in the hands of poets, historians, soldiers, public officials of one kind or another. They were used by statesmen in writing thoughts and ideals that are held in high reverence by the present generation. Their constant use over a period of years endeared them to their owners to such an extent that they might be said to have become the companions as well as the servants of their masters. This was certainly true of the Independence Desk, which was used by Thomas Jefferson over a period of half a century.