This article notes the various woods cabinetmakers have used, such as oak, mahogany, maple, and cherry, and argues that birch is comparable in quality and should be equally as desirable. It notes the limited locations in which birch was used and the wide variety of items that were crafted from the material, from clocks to tables to plates. It originally appeared in the November 1940 issue of American Collector magazine, a publication which ran from 1933-1948 and served antique collectors and dealers.

Many qualities have gone into the making of the much discussed “American way” but one of the greatest seems to have been ingenuity. Old-fashioned terms for it were faculty, sconce, and horse sense, but all added up to the same thing: an ability to take the thing or idea at hand and turn it to good account. 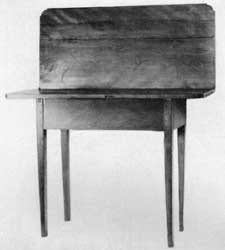 A Birch Card Table: Originally from central New Hampshire, it is an example of a village cabinetmaker's adaptation of the Hepplewhite style. Skirt and drawer front are of curly grained wood.

Nowhere was this more apparent than with Early American cabinetmakers. They were receptive to changing furniture fashions but never slavish copyists of Old World designs. From the Jacobean to Early Victorian, after crossing the Atlantic, each retained its general form but took an American flavor which today is recognized as not inferior to the original.

The same holds with the materials used. The old craftsmen recognized public partiality for certain kinds of woods such as oak and, later, mahogany, but if not easily available, they were quick to see the fine qualities of the native woods that grew in profusion. Here were virgin forests filled with trees of a variety and quality unknown in the Old World.

Trial and error soon showed which were best as cabinet woods. And so household furnishings in oak, walnut, maple, cherry, and even pine were made by cabinetmakers of varying skill, with the result that today some of these pieces are held by some collectors in preference to the more sophisticated mahogany ones.

Collectors have for some years recognized the beauties of color and grain in pieces made of cherry walnut, and maple, but there was another cabinet wood frequently used by the old craftsmen and available in large quantities from Massachusetts northward, that has so far been the forgotten country cousin with the general public. This was birch.

Now the word naturally brings to mind a woodland scene with silver-trunked trees or takes us back to primitive beginnings in the shape of a birch-bark canoe propelled through lonely waterways by a copper-hued Indian. 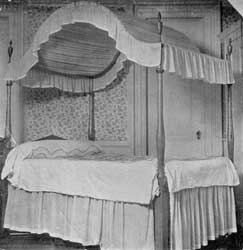 A Field Bed of Birch: This piece, in original New England red, was found complete at Harrison, Maine. It dates about 1800 and has simple vase-shaped posts.

However, for all its beauty, this tree furnished no important cabinet wood. That came from two other members of this group, the yellow and the black or “cherry” birch. The botanical section of Zadock Thompson’s Vermont, first published in 1824, tells us why.

Concerning the white birch he says: “The wood of this tree is lighter, when seasoned, and less valuable than that of the yellow birch and black birch.” Then he goes on to describe the former as “very valuable. It ranks next to the sugar maple in excellence as an article of fuel, and is used for various other purposes. It is sawed into joists, planks, and boards, and is used by the cabinetmaker for bedsteads, tables, and numerous other articles of household furniture. It is also made into yokes for oxen.

“…Cherry birch is not so abundant,” he adds, “but the wood is more highly valued by the cabinetmakers, being finer grained and susceptible of a higher polish. When freshly cut the wood has a skirt, and stretchers are of this hard wood, light rosy hue, which deepens by exposure to the light. It is much used in the manufacture of bedsteads, tables, sofas, armed chairs, and a variety of other articles, and with age assumes very much the appearance of mahogany.”

He also comments on the size of both kinds of trees. Eighty feet in height and a diameter of three or four feet for the trunk were not unusual. Therefore, since the wood was fine of grain and capable of being cut into “dimension stock” so that checking, cracking, or warping could be held at a minimum, it was quite logical that our early cabinetmakers should use it for inexpensive country furniture, since it had all the advantages of the more costly walnut, cherry or even maple, in some cases, it had a distinct curl of grain that made for decorative effect.

Further, because of its strength and hardness, birch worked well on the turning lathe. It was an ideal wood to use for making ring-turned chair legs and stretchers, uprights for high or low-post beds, and similar items. Add to this the fact that furniture of yellow birch took on a pleasing amber shade with age, and that of black birch a reddish tone similar to that of cherry, it would seem obvious that both types would be favored materials with American cabinetmakers whose clients appreciated well-furnished homes but were lean of purse. 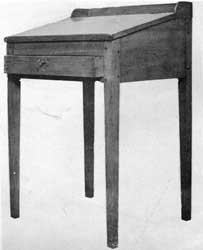 A Schoolmaster's Desk: In this piece the legs and frame are of birch; the lid is of pine.

I acquired my first two pieces of birch antique furniture nearly twenty years ago near Laconia, New Hampshire. They were simple country pieces of about 1790, a card table and a chest of drawers. A few years later I found a field bed of the same wood, but finished in the “New England red,” in the garret of an old farmhouse at Harrison, Maine.

Already partial to cherry and maple pieces, I soon added birch to my interests and have since endeavored to keep a record of pieces made of this material which I have seen. My list includes tables, beds, chests of drawers, desks, chairs, and one highboy. Here the process of restoration had so far obliterated the amber tone usual with old birch as to make it easy to mistake the wood used for maple. I think this may be true of more than one piece masquerading as maple, especially where the original painted or varnished finish has either been removed or worn away.

From the places where I have seen it, or the original provenance as supplied by present owners, I have come to the opinion that practically all of the antique birch furniture was made in northern Massachusetts, New Hampshire, Maine, and Vermont. A little may also have been made in northern New York, but I feel certain none originated elsewhere in that state, in southern New England, New Jersey, or Pennsylvania. And this despite the fact that yellow birch trees have always been found growing in the Appalachian mountain range as far south as the northern part of North Carolina. Evidently, cabinetmakers in that area had very definite ideas as to what woods could or could not be used for cabinet work.

There seems to be two reasons why such an excellent cabinet wood has never had the appreciation due it, either in the days when antique furniture was new or today, when it is collected. Birch furniture was made in a limited area and for country folk who could not afford to pay for costly material and design. Nearly all of it found today is clearly for such a clientele. The number of sophisticated pieces so far brought to light could probably be counted on one’s fingers.

Second, human nature being just perverse enough to despise what is to be had in profusion and at low cost, many birch pieces were not allowed to show the rich tones of the natural wood but were stained to approximate walnut, covered over with New England red filler to simulate mahogany, or painted that off-shade of blue that was so popular from the 18th Century on. 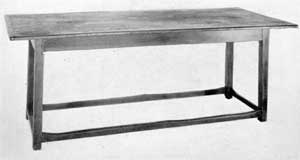 Tavern Table of Birch and Pine: The legs, skirt and strechers are of this hard wood; the top of pine. An early 19th-Century farm piece. It measures seventy-five inches long, thirty-one inches wide and is twenty-eight inches high.

But though limited in provenance and hidden under paint or stain, more household furnishings were made of birch than is generally realized. Tables with bed and legs of birch and top of pine are familiar country pieces; late banjo clocks with a finish almost duplicating mahogany; small trunks and miniature pieces, made mostly if not entirely of this workable wood, are but a few examples. Nor should we forget such primitive dishes for the dining table as plates, bowls and breadboards of birch. These last testify to the fact that it was a most satisfactory wood for the turner’s lathe, being free from knots and not prone to split while being shaped with turning chisels on lathes that were revolving at relatively high speed.

From this study of the woods employed by American cabinetmakers, particularly those of rural northern New England, I have come to the conclusion that birch was the wood used for inexpensive pieces. As roast loin of pork has often been referred to as “poor man’s turkey,” so birch was the satinwood of northern New England where money was scarce and conserved with determination. But from this least expensive of the hard woods, the cabinetmakers of this region frequently fashioned some very graceful pieces of furniture, which through the years have acquired a beauty of color that can leave maple pale by contrast, although the latter was originally more desired.

Today American birch furniture offers the collector a variation that should be more widely appreciated because of its very simplicity and warmth of tone. It stands today in about the same position as did cherry a generation ago when the collector’s taste was all for mahogany, walnut, or very primitive pieces. Then nobody wanted antique furniture of cherry but today all is changed and nice examples in this beautiful fruit wood have so many admirers that they are no longer on the bargain list. Birch furniture deserves as much and already there are a few people who appreciate the fact.