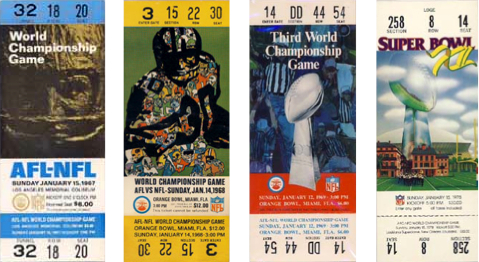 When it comes to collecting ticket stubs, one event stands out as king—the Super Bowl. Oh, there may be some swagger to a 1919 World Series stub, or a Chicago Bulls Game 6 from the 1998 NBA finals, but really: It all comes back to the Super Bowl.

And when it comes to collecting Super Bowl stubs, there are two schools of thought: Does one collect Fulls or Stubs? One would be inclined to think that since Super Bowls generally sell out, full unused tickets would be next to impossible to find. Not so, says Al Glaser of SuperBowlTicketCollector.com. “Several bowls didn’t use their sponsor and media ticket allotments,” Glaser says. “Since those tickets were generally in the best seats—between the 40s—those are the Fulls collectors are most likely to encounter. Thus, endzone tickets tend to be rarest, since those were used by fans that actually attended.”

Sunday marks the 45th Super Bowl, but did you know there will be 126 versions of those 45 game tickets? Even in the first World Championship game, now known as Super Bowl I (see photo above, far left), there were three varieties: White ends, blue ends, and gold ends. That game was well short of selling out, so there are several on the market at any given time. The tradition of color-coding tickets has carried through to today, although newer stadiums have far more than three sections to designate.

So, which Super Bowl tickets represent the Holy Grail for collectors? From a scarcity standpoint, Super Bowls II (above, center left), III (above, center right), and XII (above, far right) are considered to be in shortest supply. These were from years when tearing the ticket was de riguer. Now that bar code scanning is the de facto means of checking into a stadium, all Super Bowl stubs are considered Fulls. The practice of scanning began in 2003. That year they also tore the audit stub off, so Super Bowl tickets didn’t start remaining intact until 2004.

Ticket StubsTicket stubs cut across a wide variety of collecting interests. They are so…