Confessions of a Failed Poster Flipper

In October of 2000, I saw Phish play its last show before going on the first of two hiatuses. The venue was Shoreline Amphitheatre in Mountain View, the boys did “You Enjoy Myself” as the encore, and Jim Pollock created the poster, a linocut in a signed-and-numbered edition of 600. It featured a cowboy sitting on a horse, whose neck was bent almost to the ground as it bared its teeth at a lassoed fish. 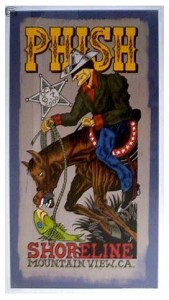 I wasn’t crazy about the poster at the time. I loved the image but the monochromatic black, blue, and white palette gave the piece an unfinished look. I liked the full-color version of the same poster offered from Phish Dry Goods later that year, so I bought one of those, I think for about $10.

Good call, but boy had I been a dope about that linocut, whose simple colors have more than grown on me. Also, according to ExpressoBeans.com, its six-month average resale price is $472.

When Phish regrouped in 2003, they returned to Shoreline for a pair of July shows—as I recall, neither date sold out. This time I was determined not to be such a chump by missing the chance to snag another Pollock. Unfortunately, Pollock was not commissioned to create the poster for those dates. Scott Campbell had been given the gig, and his image of an inverted ladle (a reference from a song called “Reba”) with a small silhouette of the Shoreline tents in the background left me cold. 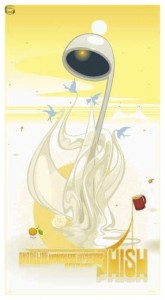 For that show, I chaperoned my son and three of his high school friends—my presence was the reason their parents had let them attend the concert. As we walked away from the poster stand, a stranger came up to me and asked if we were planning to buy any posters. I told him ‘no’ and he asked if it would be okay to give the kids $50 each to buy four $40 posters for him—he was trying to get around the two-per-person limit. They’d each net $10 on the deal. I had no objection, the kids were happy to help, so the deal was struck. “Good for them,” I thought, but they surprised me when they used their windfall to buy me a poster as a thank you for bringing them to the show. Nice kids, eh?

Of course, that poster has a reputation as a flipper’s nightmare—its current six-month average resale value is $38.50—but its sentimental value to me is incalculable, and as with the Pollock, I’ve become quite fond of the silly thing.

In 2009, when Phish got back together for a second time, the band made only one stop in the Bay Area, again at Shoreline and again with a Campbell poster, this time a bright blue horizontal depicting the sea, sky, and a sandy shore line, with clouds on the horizon spelling out the name of the band, the venue, and the date. Too freakin’ cute, I thought, but I held my nose, plunked down five twenties, and bought a pair, the goal being to flip the second to pay for the first. Truth told, I didn’t even want one of the darned things, but I was curious to see if could pull off the flip.

A day after the show, the gambit looked like it might pay off. Sellers on eBay were getting as much as $125 for the poster. The show had taken place on a Wednesday night, so I figured I’d wait until the weekend to post my extra, which I did with a reserve of $75.

A few hours after I listed my Campbell, someone listed about 20 of them, all with reserves of $60. Each one got a bid, some got two, and my poster ran its course without meeting its reserve. The “weaksauce” image, as kingofprussia at ExpressoBeans.com put it, had not even sold out—the remaining inventory ended up on Phish Dry Goods later that year.

I moved on, framing the extra for my three-year-old nephew Ansel. It looks great in a little boy’s room—must be all that blue. This year, Phish will play three nights at the Greek in Berkeley. I’ll be there the first night and I’ll probably buy whatever poster is offered for sale. Will I buy two? That will depend on the image. My new rule is this: only buy two if the second will look good in Ansel’s room.