Dawn of the Flick: The Doctors, Physicists, and Mathematicians Who Made the Movies 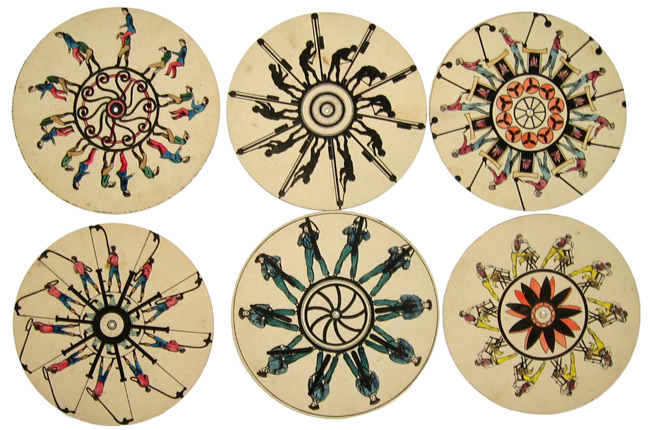 Early optical toys from the 19th century are expressions of our almost primal urge to animate the inanimate. Or so believes Richard Balzer, one of the foremost collectors of optical toys, magic lanterns, camera obscuras, and other objects that play tricks on the eye. For Balzer, these early optical toys, as well as our continued fascination with flipbooks, are part of a continuum that has culminated in the movies. “The quest for animation is very old,” he says. “Cave drawings often depicted animals in motion, and shadow puppets achieved animation through moving shadows. Movies are an outgrowth of all of this.”

“The Praxinoscope is an important stepping-stone on the road to the movies.”

Thaumatropes from the early 1800s are perhaps the first optical toys to suggest how tantalizing moving pictures could be. In 1825, a London physician named John Ayston Paris produced a set of six paper cards, which were packed in a round container and sold as a “Thaumatropical Amusement.” The label on the container made the toy’s educational and scientific purpose explicit: “To illustrate the seeming paradox of seeing an object which is out of sight and to demonstrate the faculty of the retina of the eye to retain the impression of an object after its disappearance.” 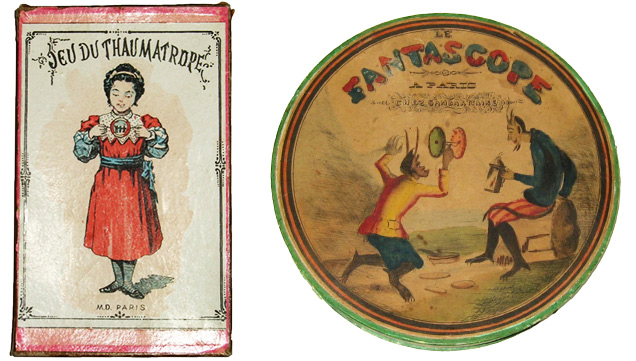 Above left: The Game of Thaumatrope, published by Mauchair Dacier, Paris, c. 1891. Above right: This French Phenakistoscope called The Fantascope, c. 1840, used the discs shown at top.

What Dr. Paris and others were trying to demonstrate was the theory of persistence of vision, which held that because the eye could retain an image for a fleeting period of time (or so it was thought), that image would fill the gap between it and the next one the eye encountered. Thus, persistence of vision seemed to explain how objects or figures in a sequence of static photographs could appear to be moving or animated when that sequence was viewed at high speed.

Producing this effect required nothing more than a card from Paris’s container. Each was hand painted on both sides and had short lengths of thread attached to their edges at the card’s equator. “You’d hold the threads between your thumb and your second finger,” Balzer explains, “and as you turned the threads, the card would spin, creating the animation.” 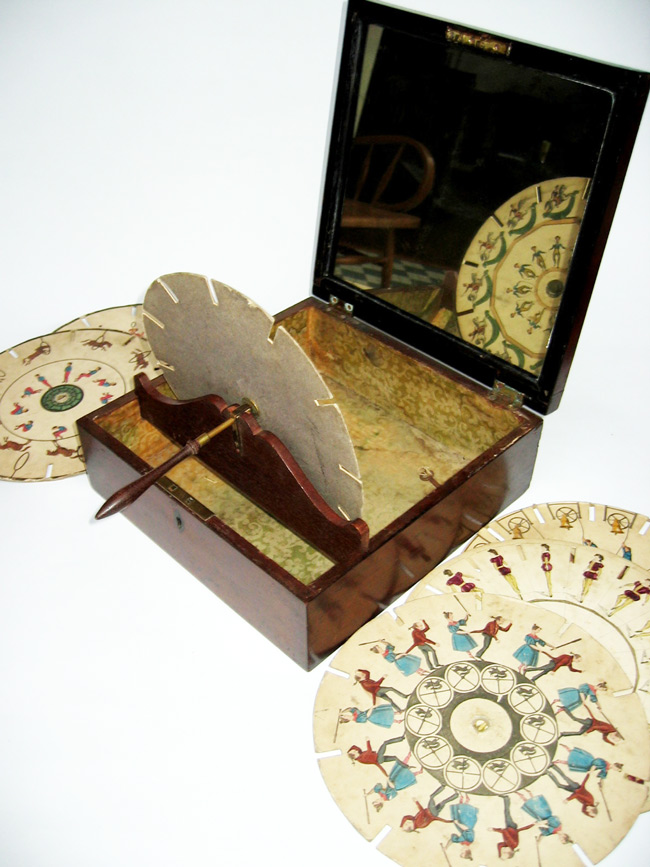 To see the images on the discs designed for this English Phenakistoscope, c. 1835, viewers would look through the slots in the discs and see the animations in the mirror.

Sounds like fun, right? But the images on the cards were tame to the point of boring, while the riddles that accompanied them were exasperatingly dull. “They must have provided clever conversations for adults,” Balzer remarks dryly. For example, a card with two bare trees on one side asks, “Why is the revolving of these trees like the road to Hammersmith.” The back of the card, featuring the trees’ green foliage, designed to pair up with the limbs, as well as the riddle’s punch line, answers, “Because it’s the way to turn ’em green,” an allusion, we can only assume, to the carriage-sickness that plagued travelers on this twisty and winding road. Those pre-Victorians were a laugh a minute.

Next came the Phenakistoscope, which was conceived simultaneously by a Belgian physicist named Joseph Plateau and an Austrian mathematician named Simon von Stampfer, who called his device a Stroboscope. “From what we know,” says Balzer, “these were two independent developments, but they were largely the same device.” Now instead of just a pair of images for the viewer’s eye to bounce between, Phenakistoscope discs, which were spun by hand, featured a dozen or more images, creating unprecedented fluidity of movement. 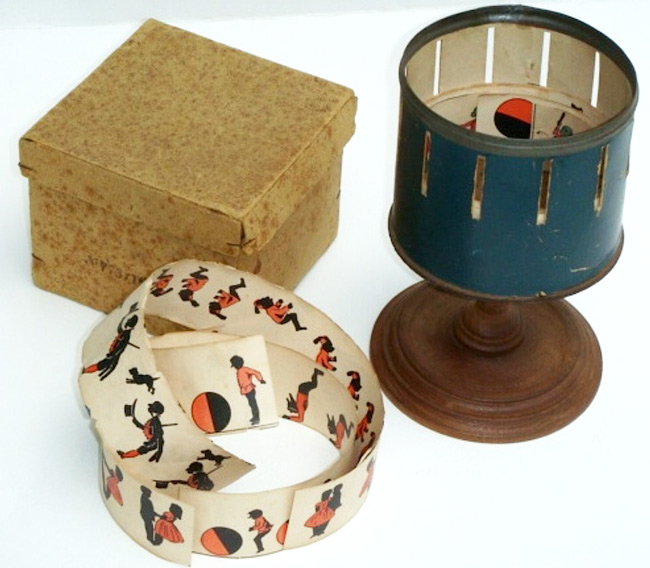 The problem, though, with Thaumatropes and the various types of Phenakistoscopes was that they were only viewable by one person at a time. “With the Thaumatrope, you could only see the effect by holding the spinning disc in front of you. The Phenikistoscope required a mirror, which, again, meant only one person could see it.” The next step, therefore, was to expand the audience for these animations. The answer was the Zoetrope.

“With the Zoetrope, you no longer needed a mirror to see the image,” Balzer says. “Six or seven people at a time could look through the slots to see the images.” In the 1860s, the Zoetrope was patented in the United States as the Wheel of Life, and by 1870, game company Milton Bradley was manufacturing the devices. 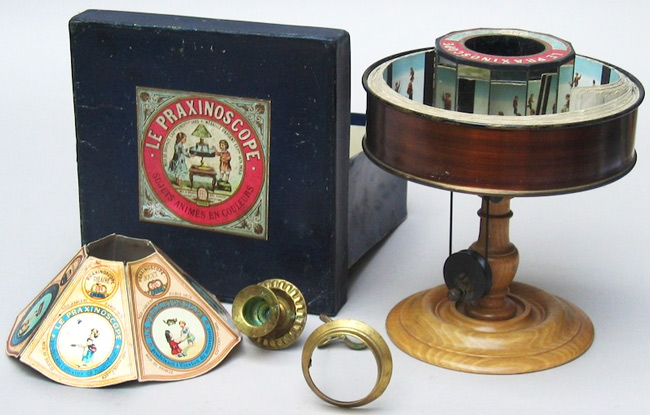 The Zoetrope failed to fix one important problem, though: The resolution of the images remained poor, due to the distortion caused by the repeated interruption of light that flickered through the viewing slots. That prompted a French science teacher named Émile Reynaud to invent the Praxinoscope in 1877. “Reynaud asked, ‘Why do you need to look through these slots at all?’” says Balzer. “He put multiple mirrors on the inside of his Praxinoscope, which meant viewers did not have to look through slots to see the effect.”

The Praxinoscope is a particularly important stepping-stone on the road to the movies. “These are like little, teeny movies,” Balzer says of the strips that went in Reynaud’s device. “They’re little scenes, so Reynaud developed the Praxinoscope Theatre, to make the experience of viewing his strips more theater-like.” Now the technology was back to one viewer at a time, like the old Thaumatropes, but the experience for that solitary viewer was more, well, theatrical, since the viewer was now watching the looping strips through a proscenium on the outside of the Praxinoscope’s box.

Reynaud also made Praxinoscope Theatres, such as this one, c. 1879.

By 1888, Reynaud had figured out how to scroll through 500 or more images in a row rather than the paltry dozen allowed by his Praxinoscope, and that breakthrough led to the first public viewing of an animated cartoon (three of them, in fact), in 1892, which Reynaud called Théâtre Optique. “The images were hand-drawn by Reynaud,” Balzer says, “and it was popular for a little while, but he never made any money and he died a pauper.”

Blame the Lumière brothers, who are credited with being the world’s first filmmakers in 1895, and Georges Méliès, the subject of Martin Scorcese’s 2011 movie “Hugo.” Méliès produced and exhibited the first of his 555 films in 1896, and by 1903, he had even made a movie about magic lanterns, which continued to be a popular form of entertainment during the earliest days of the film industry.

Today, we know that persistence of vision does not work like the progenitors of film thought it did (the retina does not retain images like Dr. Paris and others theorized), and many movies are filmed in 3-D and displayed on screens that are sometimes five stories tall. But as the technology of moving images has progressed and the group experience of attending a film has gotten increasingly sophisticated, a parallel trend has emerged, namely, to permit anyone to watch anything, anywhere, on a tiny cell phone. Curiously, this medium that was once limited to the single viewer appears to be circling back to that one-at-a-time format. The irony is not lost on Balzer. “It’s a very interesting loop,” he says, pun intended.

(All photos courtesy The Richard Balzer Collection. To see these optical toys in action, visit the website.) 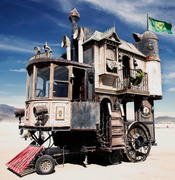 Hollywood at Home: Vintage Bolex Movie CamerasToo Lazy To Work Out? Machines That Exercise for You, From Victorian Era to Now

Magic LanternMagic lanterns, also known as optical lanterns, provided one of the most po…