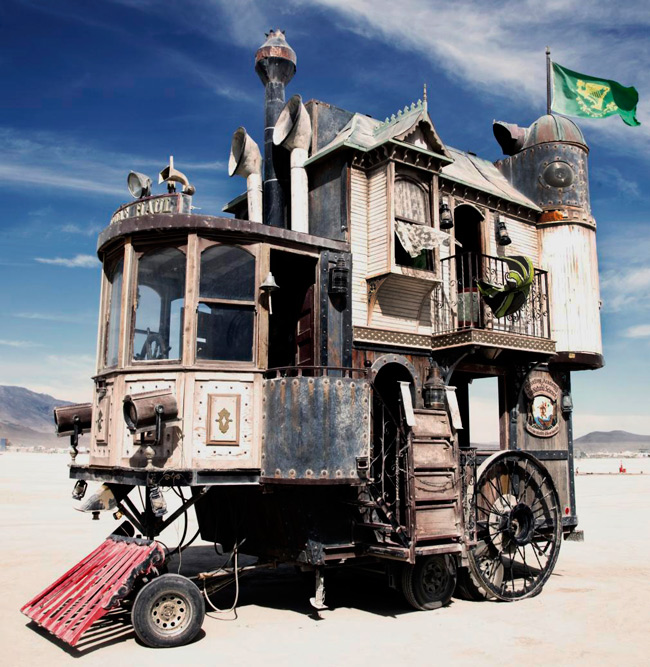 Burning Man is flipping weird. The annual pilgrimage draws tens of thousands of attendees to the middle of an inhospitable desert where they enjoy a week of delusional mayhem, often in a haze of physical and spiritual intoxication (not to mention the dust clouds that frequently cover the sky). In this wild dimension where fantasy and reality collide, it’s not uncommon to see giant moving sculptures and “art-cars,” often spouting flames and exhibiting all kinds of mechanical wizardry.

To compound the madness, contraptions featuring mechanical devices from bygone eras are also added to the mix, none of which are quite so magical as a nomadic 19th-century structure called the Neverwas Haul. Equal parts locomotive engine, steamship, and Victorian house, the Neverwas Haul is home to the “Travelling Academy of UnNatural Science.” This mythical voyager’s club is helmed by Master and Commander Shannon O’Hare, a.k.a. Major Catastrophe. Originally constructed at the aptly named Shipyard Studio in Berkeley, California, the Neverwas Haul debuted in 2006 and has since become a staple on the Burning Man scene.

“Even though we have ray guns and amazing flying machines, we wear top hats and wool jackets.”

Measuring 24 feet long by 12 feet wide, the Neverwas Haul is built directly onto a fifth-wheel travel trailer, making it relatively easy to tow from its home in the San Francisco Bay Area out to Black Rock City, Nevada, and back. Once out on the desert lake bed, which locals call the “playa,” the Neverwas Haul roams freely, a steampunk masterpiece brought to life with a diesel engine and a wooden ship’s wheel.

For those new to steampunk culture, it originates in the emerging science-fiction of the late 19th century, when ideas about the future were colored by the innovations of the Industrial Revolution, including steam-powered engines and mass-produced mechanical parts. Think books like “20,000 Leagues Under the Sea” or “The Time Machine.” The genre was more recently revived in the late 1980s by writers like K.W. Jeter, who combined anachronistic technologies and settings to create haunting sci-fi visions.

Like their steampunk predecessors, O’Hare and his band of explorers imagine the Neverwas Haul adrift in a world where archaic inventions can be used to travel the outer reaches of space and darkest depths of the seas. In the midst of a major renovation prior to this year’s Burning Man adventure (August 27th to September 3rd), O’Hare gave us the scoop on his vehicle’s miraculous birth and its journey into the future. 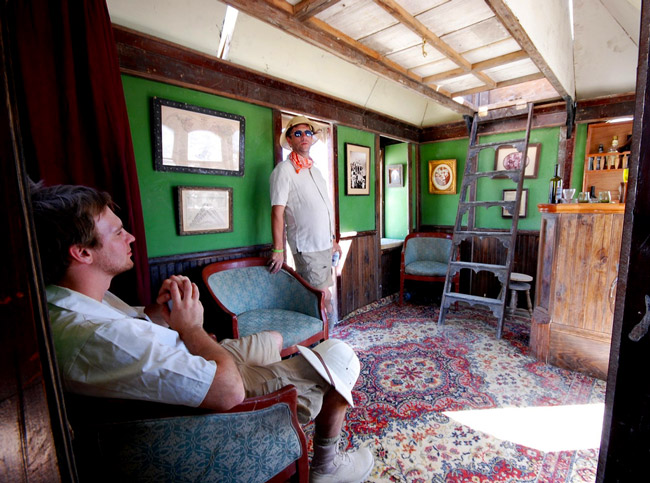 Collectors Weekly: What was the inspiration for the Neverwas Haul?

O’Hare: Our first project was a 40-foot tall, all-wood Victorian clock tower, which brought together a great group of people—tinkerers, fabricators, machinists, and woodworkers. At that time, in 2005, there was no steampunk scene at Burning Man.

The Neverwas Haul is a true “haul” derived from the Irish gypsy vardos or wheeled caravans: The idea is that gypsy women in this steampunk world built these steam-powered vardos because their husbands had sold off all their horses and mules in exchange for drink. The invention became so popular that the aristocrats or gentry wanted to have them too, and the Neverwas is one of these more elaborate, upper-class vehicles. 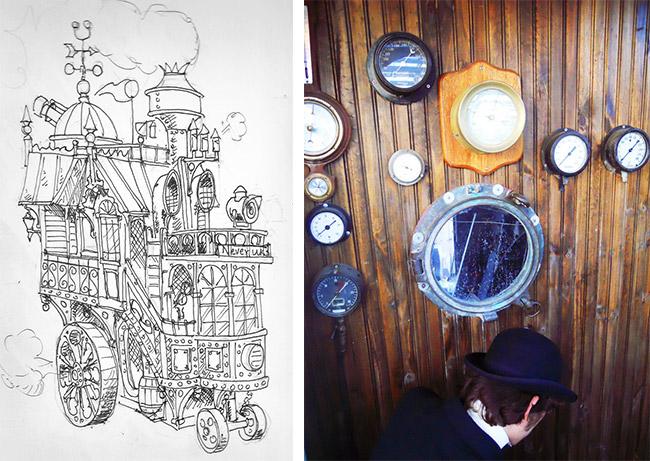 Left, one of O’Hare’s earliest sketches of the Neverwas Haul concept. Right, a wall of gauges and dials inside the structure. Photo by aviatorfox.

The Neverwas is the ultimate haul, and technically has four different levels: an engine room level, a command deck level, a lounge level and an observation deck level. “The Travelling Academy of UnNatural Science” is a group of explorers and scientists that uses the Haul as their exploratory vehicle. The club building itself actually goes out and explores, and its mission is to circumnavigate the earth, without the use of a zeppelin. We don’t stay in the Neverwas, because it’s really meant as a clubhouse and art piece rather than a camper.

Everything we do is in the steampunk genre, basically Victorian science fiction, which Jules Verne and H.G. Wells are credited with creating. So this is the style, the Victorian style set in a fantastic future as envisioned by people of the 1800s. Even though we have ray guns and amazing flying machines, we wear top hats and wool jackets and everything’s made out of brass. Whenever we’re motoring on the playa, I command that my crew dress appropriately. My personal costume is a 1927 ship’s coat made for the U.S. Navy, which I bought when I was 25. 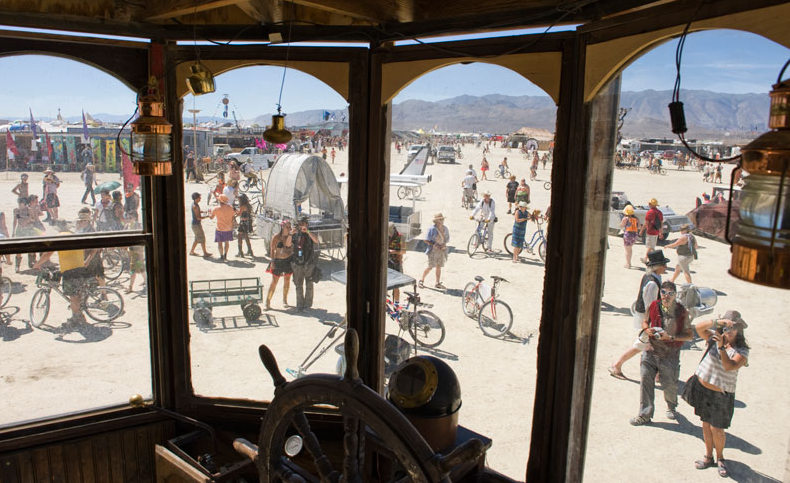 Looking out the windshield of the Neverwas Haul onto the playa at Burning Man. Photo by Andy Pischalnikoff.

Collectors Weekly: How did you construct the Neverwas?

O’Hare: Well, we quickly found out that transporting tank treads to the playa, though we could easily get them for free, was essentially impossible. So I changed the design to be constructed on a fifth-wheel travel trailer, which has turned out to be immensely practical. Once the Haul is packed down for traveling, it is the legal highway height and width, so I can pull it behind my pickup truck. 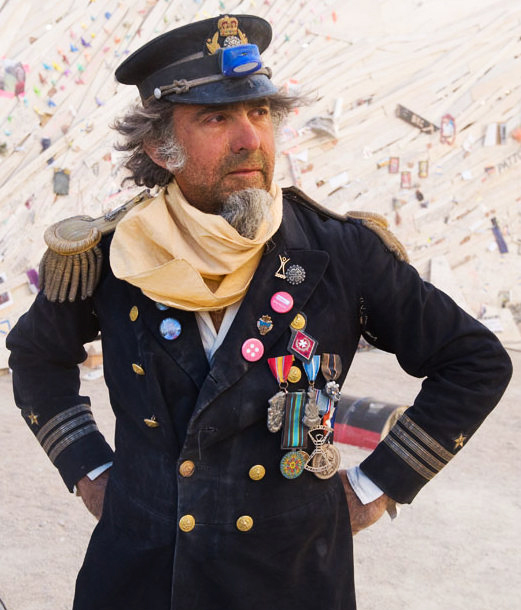 We built the Neverwas from scratch, or from “obtanium,” our word for repurposed or recycled: that which you can obtain. Our studio in Vallejo, California, is called “Obtainium Works,” and people bring us all kinds of treasures, which is fantastic. The materials are industrial detritus and objects that simply fall into our grasp. If something really old and valuable is donated, it’s usually by mistake.

We are currently doing restoration on the Neverwas, replacing wood and elements that have broken and worn out. We’re really not altering the design and, in fact, people won’t be able to tell she’s changed at all. Right now we’re focusing on the Neverwas, but members of our crew also have their own art projects, like “The Chairway to Heaven,” which is an elevated sofa, quite a beautiful piece. And we’re constantly building new art-cars.”

Collectors Weekly: How is the Neverwas Haul powered?

O’Hare: Though it appears to be a steam-powered vehicle, that’s actually just “hot air.” We originally installed a boiler to create steam, but it never worked very well, and out on the playa the steam disappeared so quickly it was purely academic. No one seems to notice that we don’t have billowing puffs of smoke or anything like that. And truthfully, when a steam engine is running perfectly well, you shouldn’t see anything coming out the smokestack.

The original engine was a single-cylinder agricultural diesel engine which ran a hydraulic pump that drives a wheel motor mounted on the front steering assembly, which pulls the whole Haul along. The big iron wheels on the side are just outriggers that help balance us out. And it does actually steer with the big ship’s wheel.

Collectors Weekly: And how fast does it go?

O’Hare: If we hit 7 miles per hour, we’re going too fast.

The Haul rolls through a typical dust storm on the playa.

Collectors Weekly: What other sorts of projects has the Neverwas Haul prompted?

O’Hare: We built a steam-powered carriage, a four-person pedal powered vehicle called the “Parlor Car,” and we made a small replica of a San Francisco cable car called the “LB&O Trolley.” We also have a giant teapot which we use for parades in Vallejo. And built into the tower of the Neverwas is a Camera Obscura, which projects whatever’s outside onto a screen inside.

My favorite part of the whole project is people’s reactions. After people see the Neverwas and what we’ve done, they often go out and build their own fantasy and their own dream. That is the biggest reward, to see people go out and create their own amazing things. After seeing the Neverwas, a fellow artist named Sean Orlando built the “Steampunk Tree House,” and then went on to construct a Gothic rocket, which is on display in San Francisco near the Ferry Building. It’s a classic sci-fi rocket ship, as well as an absolutely amazing art piece. They also built a Nautilus submarine as a commissioned artwork.

Collectors Weekly: How does the steampunk lifestyle fit into Burning Man?

O’Hare: At first I thought there would be a backlash against us, since we’re dressing as these Victorian explorers and essentially bringing colonialism to the Burning Man savages. I thought people would reject that element from contaminating the purity of this Burning Man spirit of freedom and non-monetary this, that, and the other. Instead it was just the opposite: they embraced it and loved it. If you look at Burning Man projects today, a number of them have embraced the steampunk genre. 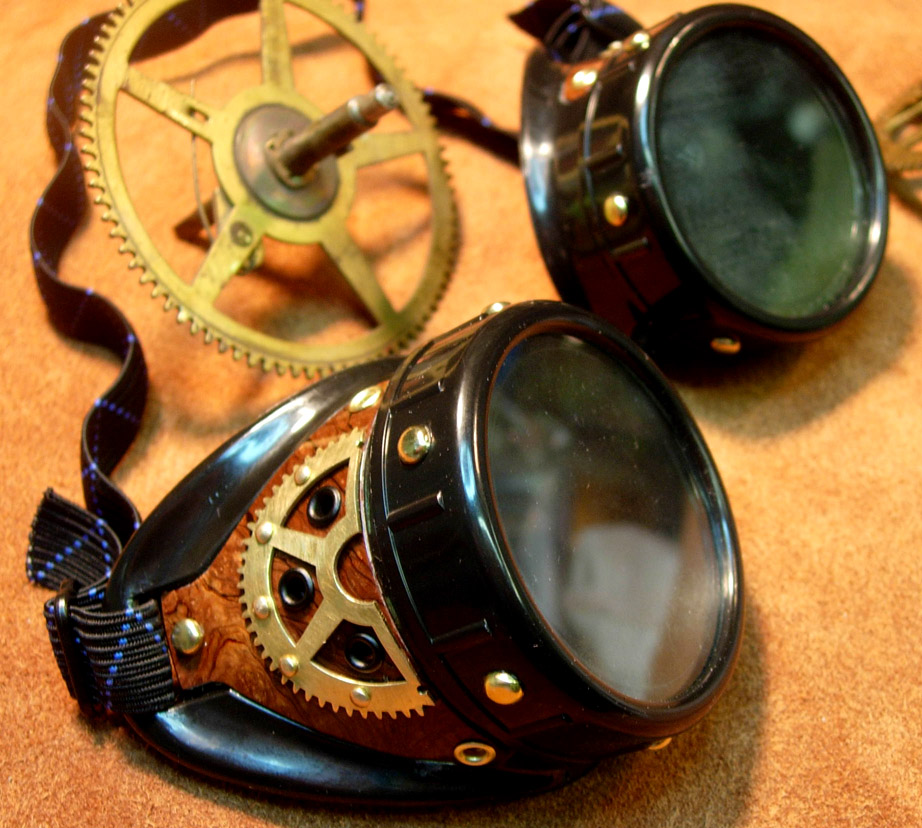 In some ways steampunk has since become synonymous with Burning Man, as much as furries and raves. It’s simply become another Burning Man character type—someone who’s walking around with a pith helmet and goggles is as common as someone wearing a flame-painted cowboy hat and furry chaps, and nothing else.

Our crew, of course, is always well-clothed, though our ladies do seem to have a penchant for wearing corsets and frilly, negligible blouses. But that’s a fashion choice they make themselves.

Collectors Weekly: And the aviator-style goggles?

O’Hare: The goggles have become connected with steampunk culture, but we were always wearing goggles, since you need them on the playa to protect your eyes from the dust storms. And of course when doing machining and welding, we also normally wear goggles. With the steampunk style, the goggles are integral to the engineer, motorman, aviator look. It’s a look derived from flying or driving a vehicle that has no windshield.

Collectors Weekly: Where else can we see the Neverwas Haul?

O’Hare: Here in Vallejo we do the annual Mad Hatter Parade [an art-car festival happening on December 1st], but before that, on Saturday, September 29th, we’re also hosting the very first Kinetic Obtainium Cup, a human-powered sculpture race on Mare Island. It will be a mobile-art race, much like the Kinetic Grand Championship in Arcata.

(To learn more about the Neverwas Haul, visit the website. Thanks to Andy Pischalnikoff, Christopher Michel, aviatorfox, and mr science for their photographs.) 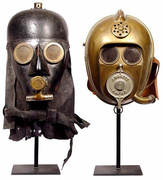 Too Lazy To Work Out? Machines That Exercise for You, From Victorian Era to NowDawn of the Flick: The Doctors, Physicists, and Mathematicians Who Made the Movies