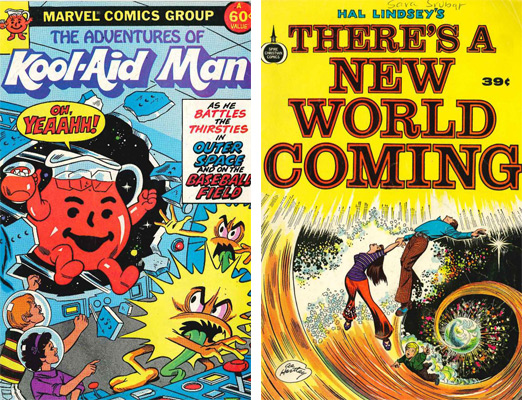 When we first encountered Alan Scherstuhl’s “Studies in Crap” column over at the “SF Weekly,” we knew he was one of us. Every week, he goes digging around thrift stores and flea markets looking for that special book that speaks to him. Sometimes its a Kool-Aid Man comic book where the oversize beverage pitcher busts into orbiting spacecrafts, or a comic wherein pseudo-Archies are raptured up to heaven in a psychedelic swirl.

But when Scherstuhl finds the nearly inedible recipe for Rush Limbaugh’s grandma’s Jell-O salad, he knows he’s struck gold. Currently the managing editor of the “SF Weekly,” he started his column in 2008 at the “Kansas City Pitch.” It also ran in New York’s “Village Voice” and “LA Weekly.”

Collectors Weekly: Tell me how you started “Studies in Crap.”

Alan Scherstuhl: Kansas City, Missouri, was a great place to start “Studies in Crap” because people don’t pick over those thrift stores the way they do in San Francisco. Irony hasn’t hit the Midwest as hard, and fundamentalist fringe material is in great abundance there. One thing I appreciate about coming to San Francisco is that I’m finding left-wing crap, finally.

“I want the books that everybody looks at and thinks, ‘Oh, we’ll deal with those later,’ and then nobody ever does.”

I am a book fiend, and I’ve always been drawn to weird, old books. Over the years, I started purchasing them at thrift stores because I found them so amusing. One day, I realized, “Well, I love looking at these crazy, old books, and maybe other people would, too. I should start writing about them.” I had a book from around 1966 with Dustin Hoffman on the cover, called “Someone You May Know,” and it purported to be a study of homosexuals. I thought, “The world needs to see this.” That was summer of 2008. Since then, I’ve had at least one column every week.

Back in a high school, a friend gave me “A Guide to Being a Catholic School Girl,” which has an astonishing chapter about “bad” habits. It recommends that if you are a girl, you never use a bar of soap in the bathtub or itchy washcloth because those might inflame your passions. It also suggests that you always sleep with your hands outside the bedsheets and that your clothes always be very loose. I’ve never written it up in “Studies in Crap.” That’s a testament to how many strange books I’ve found, that I still haven’t gotten around to writing about the worst one I’ve ever collected.

Collectors Weekly: So you already had these books in your collection?

Scherstuhl: When I started I had about five, and then the world opened. I started seeing them everywhere. I can case a thrift store or an antiques mall pretty quickly now, and sense whether they have crazy books. I’m fortunate that this is not stuff other people collect. 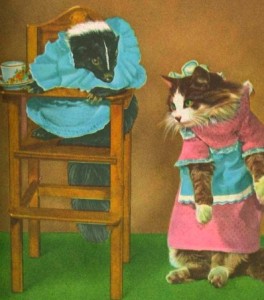 This is why your cat hates you: Images from the live-action storybook, "Squiffy the Skunk."

Most collectors buy things that other people want. I want the books that wouldn’t occur to people to put in their garage sale. I want books that are in the unmarked box in the basement at the estate sales and flea markets—the books that everybody looks at and thinks, “Oh, we’ll deal with those later,” and then nobody ever does.

As a freelancer, I had a lot more time to go dig and cull than I have since I started this job. A couple weeks ago, I actually, for the first time, ordered something on eBay. I felt guilty about it, but I acknowledged in the column that it wasn’t something I stumbled across. I still go hunting once or twice a week. I target a different suburb or neighborhood in the city and scour for everything I can find.

Recently, I did quite well at an antiques mall in Pleasanton, California. There, I found a bunch of popular ’50s digest magazines for housewives like “Coronet” and “Pageant.” They’re my current favorite thing, and they aren’t all that common because few people bothered to save them. The world is choked with old “Lifes,” “National Geographics,” and “Playboys,” but “Coronet” and the like were never aiming for posterity—they were just riding “the now” as surely as the Yahoo homepage does. 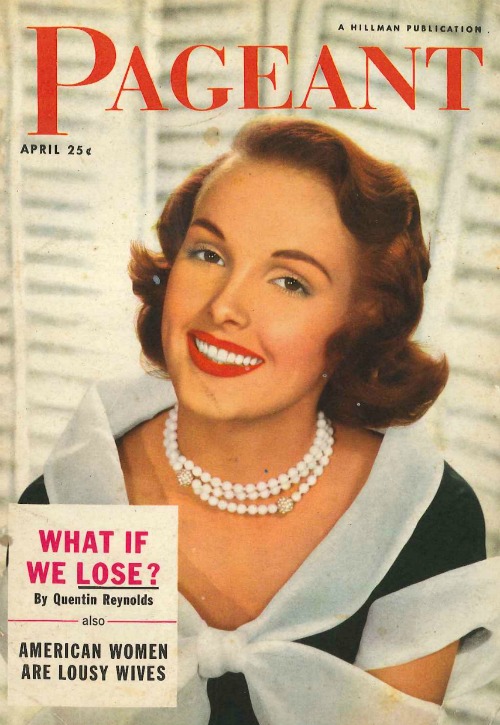 Doesn't this women look like she's trying to be the perfect wife? A 1951 "Pageant" magazine Scherstuhl found in Pleasanton, California, which also ponders the Cold War.

They inevitably have cover lines like, “The Tragic Failure of America’s Women” or “American Women Are Lousy Wives.” I don’t understand why American women were taking it so hard from these magazines. They are cruel to American women, and they’re very pro-American man. The woman who wrote the “American Women Are Lousy Wives” article argues that American women are much more demanding than women from other countries are. She says women in foreign countries have larger families, make larger meals, clean larger houses, and it would never occur to them to ask their husbands to help.

Collectors Weekly: Does it shock you how much things have changed?

“You know how we can reduce each decade of American life over the last 70 years to five simple images? This stuff always complicates that.”

Scherstuhl: The kind of crap I’m interested in has ideas that are discredited now but were everyday at the time. It seems like outrageous stuff, but what I love about the ’50s magazines is that these cover lines are just what the magazine publishers thought was on the mind of most Americans. Today, we get a sense of what Americans think about all the time, in the form of web-site comments, but it’s much harder to find a record of what people were thinking back then.

Because of that, these books and magazine give a window that cuts against the general feeling we have about each decade. You know how for each decade of American life over the last 70 years, we can picture the movie montage in our head of that decade, where they reduced it to five simple images? This stuff always complicates that. One thing I didn’t write about in my post is that one of these 1951 “Pageant” magazines has an artistic nude in it, a woman fully unclothed, and it’s presented without comment. It’s just in the middle of the magazine, and “Playboy” hadn’t hit yet. Every issue has articles about sex; it was as constant in the culture as it is today.

Collectors Weekly: Would you consider your blog anti-nostalgic? 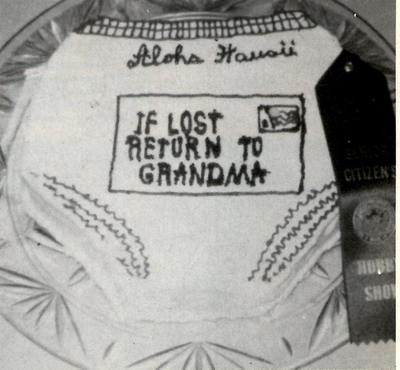 Scherstuhl: I like that word, “anti-nostalgic.” I worry about nostalgia a lot, especially when I find something that resonates with my own childhood, like an 1980s article on the third “Stars Wars” movie. My gut feeling has been, for years, that all of American history is predicated upon a nostalgia for a purity that was destroyed the minute that people became aware of it—going back to “The Pilgrim’s Progress.” Or Mark Twain’s “Life on the Mississippi.” The first hundred pages or so are the best thing ever written by an American, yet that book is already complaining that, well, the steamships are getting rid of the paddle boats and something tangible that somehow stood in for America’s greatness has been lost.

Collectors Weekly: Why are you picking on Kool-Aid Man?

Scherstuhl: I’ll admit, what I did with Kool-Aid Man is deeply unfair. No children’s character can withstand rigorous intellectual scrutiny, and I was calling scientists to ask what would happen to Kool-Aid Man in space. I did that because it’s not entirely a joke that I called my column “Studies in Crap.” I’m always trying to make a intelligent point about society, but not be pedantic about it.

Collectors Weekly: Do you think that if we look at the past in a fuzzy sentimental way, then we’re not getting the whole picture?

Scherstuhl: Of course, but also I worry sometimes about dwelling too much on bigotry and the bad things. Whenever Thanksgiving comes around and somebody starts complaining, “This is an imperialistic holiday,” that doesn’t have anything to do with me spending time with my family.

The real pleasure I get from these old books and magazines, the delight I take in them, is I hope proportionate to the amount of things I find to be outraged by. I have a 1961 issue of “Pageant” right now that has on the cover the headline, “What happens when a Negro family moves next door?” That’s both funny and upsetting, but then the article itself is really sympathetic to that black family.

We tend to think of the American past as monolithic, as if everybody felt the same way always. And I don’t think that’s true at all. One of my big interests is marriage guides, which is one of the rare things I write about that other people do, too. I try to follow what the academics are writing about them. 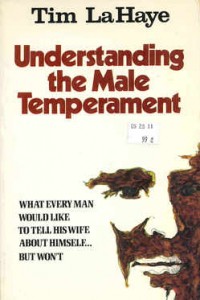 But there’s a great diversity in how explicit these marriage guides are, going back to the 1920s. There are books from the ’20s that recommend that men figure out how to please their wives in bed. Then, there are books from the ’20s that talk about how women are dirty, and you should only have relations once a month. It’s not monolithic at all. It’s truly remarkable how progressive a lot of these older guides are and then how terrible some from the ’70s are.

In the 1960s and ’70s, Tim LaHaye, who created the “Left Behind” series, was writing marital guides and guides to being a good family man. His books about marriage, such as “Understanding the Male Temperament,” are weirdly forward-thinking in what they recommend husbands and wives do in the bedroom. They’re also revealing in the parameters of the relationship they set. To understand the relationship of Michele Bachmann with her husband, these books are not a bad place to start. They’re very much about how to bring the biblical idea of wifely submission into the 20th and 21st century.

Collectors Weekly: What is the best item you’ve ever found?

I can tell you, the greatest feeling of triumph I’ve ever had was very early in the column. In 2008, I was standing inside a dumpster in a thrift store in Kansas City where some church had donated a thousand books. Standing in a dumpster of books, I found a community cookbook [detail below] from Cape Girardeau, Missouri, in 1977.

Having grown up in the Midwest, talk radio country, I knew Cape Girardeau is where Rush Limbaugh is from. Sure enough, there were recipes by his grandmother in the book, including the most ghastly Jell-O salad that has ever been perpetuated. Of course, I made it, and that was just a real pleasure. But that was the moment when I got the feeling like, “Hey, wait, maybe I should keep doing this.”

When Scherstuhl found Rush Limbaugh's grandma's recipe (above) for "Under the Sea Salad" in "Recipes From Old Cape Girardeau," he, naturally, had to make it. His friend gave it this review: "When you put it into your mouth, you think you're not going to gag. Then you bite into one of the olives, and it's all over." Via "The Village Voice"

You can read “Studies in Crap” at the SF Weekly’s Exhibitionist blog and follow Alan Scherstuhl on Twitter at @studiesincrap. All images, except for those relating to Jell-O salad, are from “SF Weekly.”

Sea-Monkeys and X-Ray Spex: Collecting the Bizarre Stuff Sold in the Back of Comic BooksWhen Being a Lesbian Was Profitable, For Men