When Being a Lesbian Was Profitable, For Men

The times they are a-changing: Last weekend, lesbian couple Kitty Lambert and Cheryle Rudd made history, exchanging the first gay-marriage nuptials in New York State. Just a few days before, President Obama certified the repeal of the “don’t ask don’t tell” policy in the U.S. military. But homosexuality has not always been so understood and accepted in U.S. society. In fact, in mid-century America, being a lesbian was seen as aberrant and morally corrupt, and because of its social stigma, authors willing to explore this “sin” sold thousands and thousands of paperback books. 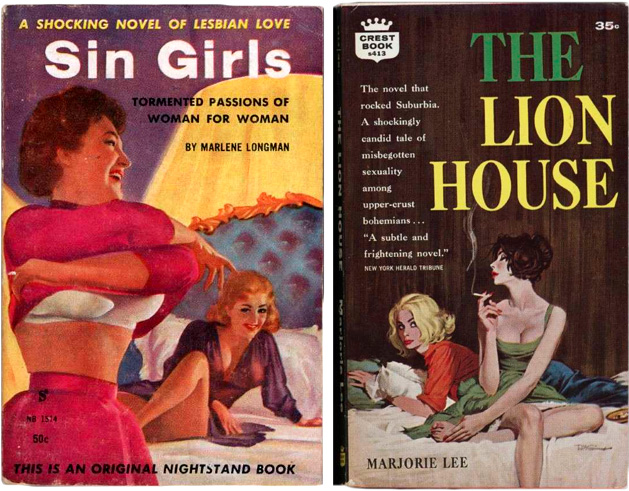 For “Sin Girls,” a lesbian romance, Silverberg wrote under the name “Marlene Longman”—get it? Fellow science-fiction author Harlon Ellison wrote a gushing cover blurb that read, “This is the most powerful novel you will ever read on the subject, written by a woman who is, herself, A TORMENTED LESBIAN!” Years later, on a Yahoo forum, Silverberg commented, “That blurb was incorrect … I was the happiest of lesbians.” 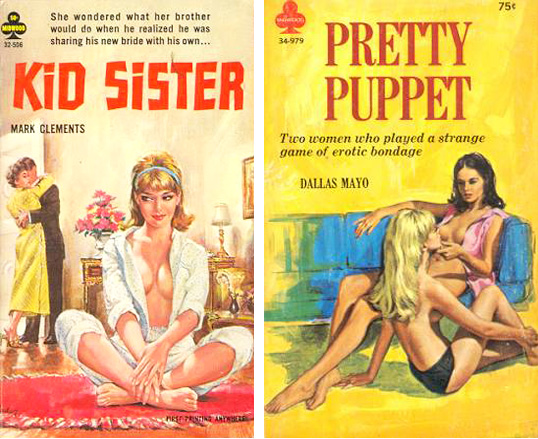 The women depicted on the covers, with their idealized bodies and sexy poses, are clearly meant to appeal to the male gaze, and wallet. The most coveted of these were painted by an illustrator named Isaac Paul Rader, who worked for Midwood Books. His covers were inspired by the works of pin-up artists Alberto Vargas and George Petty, and are now treasured as pocket-sized works of art.

Today, most of these books would be considered highly insulting to lesbians, and women in general. The characters are the equivalent of modern-day female club-hoppers who make out with each other for the paparazzi and to titillate the men around them. As for the standard plot, it goes something like this: The heroine is “turned” by some traumatic event with a man, she runs away to find both pleasure and depravity in the liberal underworld of lesbians, and in the end, she is usually “cured” by a sexual encounter with the man of her dreams. 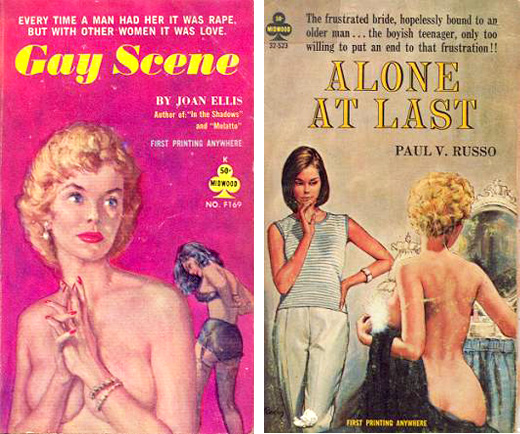 Ironically, perhaps, the salacious nature of pulp fiction gave writers the freedom to explore taboo topics, with a dose of sensitivity, even. At the time, it wasn’t uncommon for women to wed at an early age and find themselves trapped in loveless marriages, their first and only experience with sex being uncomfortable and unsatisfying. Victims of rape and incest often suffered in silence, afraid of the shame speaking up would bring. And almost no one spoke openly about the female orgasm, a hush-hush subject that was a mystery to many young wives. Since women in general weren’t encouraged to talk about their own desires, lesbians in particular kept it in the closet. 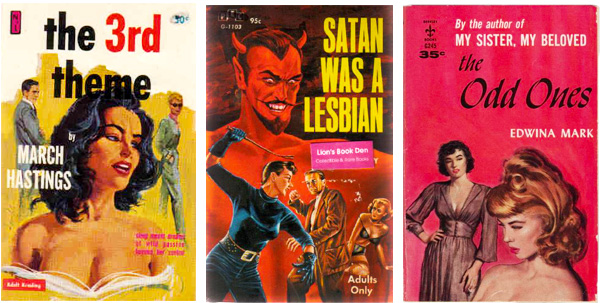 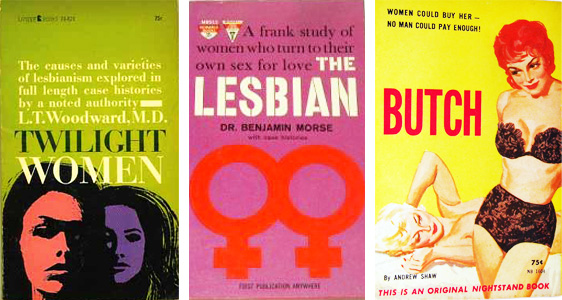 Silverberg, for example, published “Twilight Women” as L.T. Woodard, M.D. Block was so bold as to have the confused heroine of “Butch,” by Andrew Shaw (Block), read his fake sexology study, “The Lesbian” by Dr. Benjamin Morse (also Block), and come to the conclusion that the research therein described her!

Obviously, these books were all about profiting off of male fantasies; that’s not so shocking. But when it comes to publishing supposed scientific studies to appeal to the male libido, it’s clear the impact on actual lesbians—who may have wanted to read the experiences of real woman—was not a concern at all.