This article notes the uses for antique pottery crocks and jars (both historically and at the time the article was published) and important potters who created them, and it describes the difference between stoneware and redware. It originally appeared in the March 1942 issue of American Collector magazine, a publication which ran from 1933-1948 and served antique collectors and dealers.

“Five good old-fashioned stone crocks! Not a nick or a chip on any of them. Look at this little brown one with the cover. Grandma kept her yeast in that. She never fooled around with the store kind. And you neighbors can all remember the ginger cookies and hermits she always kept in those two reddish ones with the splotches on ’em. See that gray one there with the blue posy? That used to be full of green tomato pickles, made as only grandma knew how to make ’em. This big one was her churn. You know some folks pay fancy prices for these old things as antiques, but I’m just here to sell them as honest crocks that will still hold good home-cooked food — if you can get your women folks to make any. How much am I offered ? Half a dollar each? Ten cents! Henry, I’m ashamed of you when I consider all the cookies you had out of them crocks when you wuz a boy.” 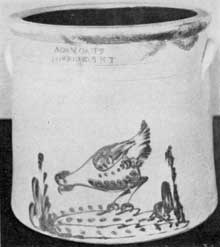 An Unusual Stone Crock: Made by Adam Caire of Poughkeepsie, New York, in the last quarter of the 19th Century. Its distinctive feature is the decoration in cobalt blue of a chicken pecking at corn.

This was a country auction. Old Mrs. Tompkins was dead at eighty-five and her children were selling what they did not want of her possessions. Mounted on an empty feed bin in the front yard, auctioneer Graves was turning each piece into a bargain not to be missed, with his quick wit and ready tongue. Gradually the bidding rose until the auctioneer sensed he had reached the limit on the stone crocks and with this, “Sold! at three fifty the lot to Emma Jones,” five pieces of American pottery passed to a new owner.

Now these crocks may have been either early or late 19th-Century vintage, but the chances are that as collectibles any one of them was easily worth what Mrs. Jones paid for the lot.

The scene of the auction was a small farmhouse in southern New England which had sheltered at least four generations of Tompkins. The reddish brown jars with the “splotches” could have come from one of the five potteries that flourished in Norwalk, Connecticut, during the early years of the 19th Century. If the gray crock with the floral decoration also bore the inscription “Manhattan Wells,” it would be reasonable to assume that it was made by Clarkson Crolius of New York and was, consequently, of more value than the eight-sided mahogany Empire table at which Mrs. Jones had cast longing eyes.

The Crolius pottery was founded very early in the 18th Century and continued until 1870. Clarkson Crolius operated it during the first three decades of the 19th Century. A crock or jug bearing his mark or that of other members of this potting family, or of its rival, the Remneys, is worth owning. These two families were New York City potters to the third and fourth generations. In fact, Henry Remney, grandson of the founder, migrated to Philadelphia and there started the business that still bears the family name and still produces stoneware.

But while any collector gets a thrill out of owning a rarity, there are pieces made later and by less renowned potters that are just as satisfying to the eye. Such is the crock illustrated. It was made in Poughkeepsie, New York, by Adam Caire, son of an Alsatian potter who emigrated to America in 1839 and started the pottery which continued under that family name, save for a brief interlude, until the death of Adam in 1896. The latter had a partner from 1856 to 1878, so this piece, marked simply, “Adam Caire, Po’keepsie, N. Y.,” must have been made fairly late in the century. Its desirability is due to its design which, done free hand in cobalt blue, is both original and realistic.

Originally this four-gallon crock may have been a receptacle for butter, for lard, or for storing eggs in water glass (the country method for preserving them against winter scarcity). Present-day uses may range anywhere from a jardiniere to a wastepaper basket. Similarly the stoneware churn which was made, along with other household pieces, in potteries from Maine to Georgia and as far west as Iowa, may serve today’s needs in various ways.

Although the popular term for these humble objects is stoneware, the earliest examples in America were not made of it, but of the softer, more porous redware which is about the first type of pottery known to man. Bricks are one form of it and the pitcher that Rebecca took to the well in Biblical times was undoubtedly another.

As the red clay used was common to most localities, our early potters set up their simple apparatus: a grinding mill for the clay, a potter’s wheel for shaping the object, and a small kiln for firing, and went to work wherever there was demand for household wares. This was about everywhere in the Thirteen Colonies and later in the United States as the large check list in John Ramsay’s excellent book, American Potters and Pottery, shows. The redware products in household use were glazed, either on the outside or inside or both. Sometimes the potter inscribed his name in the soft clay; oftener the piece was unmarked.

Stoneware, on the other hand, quite often bears the maker’s stamp. Its composition, as the name implies, is very hard. It is made from a fine, dense clay and being fired at a high temperature attains a consistency akin to hard-paste porcelain. The glaze is obtained by throwing ordinary salt into a kiln full of the ware at high heat.

As there were deposits of this special clay in both New Jersey and New York, potters in these two colonies were the first to make household utensils in this ware. There are records of such potteries in the late 17th Century, but though hardness and durability were distinct assets, the appeal of stoneware to the general public did not begin until after the American Revolution. Even then redware was far from becoming an also-ran. Potters all over the country kept on making it in various forms, along with stoneware, right down to the beginning of the 20th Century.

Red Wing Beyond the Crock: Larry Roschen on the Stoneware Legend’s Dinnerware 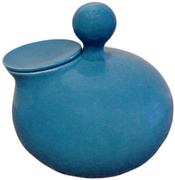 StonewareStoneware is the roughhewn cousin of porcelain. Like porcelain, it is fired…