This article discusses the use of dolls in models of historic events or locations, noting a display representing George Washington’s death as an example. It originally appeared in the July 1941 issue of American Collector magazine, a publication which ran from 1933-1948 and served antique collectors and dealers.

About a quarter of a century ago habitant groups and small-scale models of historic events and places appeared in our museums and similar public places. It was considered a most modern and dramatic way to present natural and recorded history to school children and the public at large. It still is, for that matter, and has been further developed in Mrs. Thorne’s series of American rooms in miniature and in the realistic scenes in miniature exhibited in the New Zealand pavillion at the New York World’s Fair of 1939 and 1940. 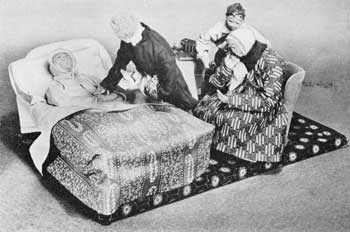 A Folk Art Washington Memorial: Here, the dolls are all made of cloth with finely stitched leather hands and feet. It was made early in the 19th Century — probably in Pennsylvania, where it was recently found. The group shows General Washington in bed, Dr. James Craik standing beside him, Mrs. Washington sitting in a wing chair, and Christopher, the general's personal servant, behind her with bottle and glass in hand.

Like other “new” things, however, the germ of the idea stems back to that timeless thing loosely known as folk art. Close to one hundred and forty years ago some unknown person fashioned the rag doll group shown here. It is an imaginary depiction of the death of George Washington and was privately owned for many years in southwestern Pennsylvania.

The grouping is on a calico-covered base about eighteen inches long by twelve inches deep. The tallest figure, that of the doctor, is about six inches in height. The four dolls are of cloth, with hands and feet of leather. The features are drawn in India ink and, though crude, those representing George and Martha Washington do bear a resemblance to their originals. The unknown maker was undoubtedly familiar with Gilbert Stuart’s portrayal of both.

The other two figures are, of course, entirely imaginary. The doctor, who is held in position by strands of thread, is dressed in a dark red coat, white stock, black waistcoat, and checked trousers of calico. He holds herbs and a towel in his hand. His hair is gray.

The servant, surprisingly enough, is depicted as a white man with reddish hair. (Washington’s servant, Christopher, was, of course, colored.) He is clad in a white shirt, black stock, striped trousers and black shoes. He holds a bottle in his right hand and a candlestick in his left.

Mrs. Washington, in a calico gown, black kerchief, and white cap, is seated in an upholstered wing chair. The doll representing Washington wears a lace nightcap and linen night shirt. The bedding is of linen and early calico. On the pedestal table, which is covered with a linen cloth, are two books and a cup and saucer.

Obviously homemade and very crude, the group is strikingly realistic. It is enclosed in a mahogany and glass case, which probably accounts for its good state of preservation over nearly a century and a half.

As is well known, General Washington died on December 14, 1799, at Mount Vernon. The following day, his secretary, Colonel Tobias Lear, wrote a detailed account which was later circulated widely. Present in the room at the time were Mrs. Washington, who was seated at the foot of the bed; Dr. James Craik; Dr. William Dick; and Dr. Brown of Port Tobacco; Colonel Lear; and Washington’s servant, Christopher.

The death of a man known as the Father of His Country and its first President was a national event of great importance and for the following decade memorial items of all sorts were in evidence. They ranged all the way from mourning jewelry to household accessories decorated with a tomb and weeping willows.

This primitive small-scale model of the death scene, as its unknown maker imagined it, is unique not only because of the careful detail with which it was fashioned, but because it antedates by so many years the present-day groupings already referred to.

Further, though dolls were made to represent certain famous people, the idea of grouping them to depict an important scene, national or otherwise, seems not to have been thought of by professional doll-makers, except puppet makers.

Cloth DollsProbably since humans have been making clothes out of fabric, they’ve made …