This article discusses the development of porcelain, from materials to designs to markings. It originally appeared in the June 1941 issue of American Collector magazine, a publication which ran from 1933-1948 and served antique collectors and dealers.

When around 1710 the Saxon Court alchemist, Johann Friedrich Boettger, instead of finding gold, discovered the method of making porcelain, he succeeded in his task in a way unforeseen by himself and by his princely employer. For in the third and fourth decade of its existence, the young porcelain factory turned into the always empty chest of the Prince Elector of Saxony an amount of nearly 1,500,000 gold thalers — indeed, a most respectable sum for the standards of those days. 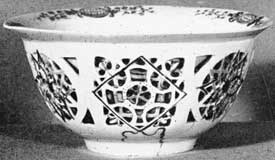 Illustration I: Earliest White Dresden Porcelain: This bowl, six inches in diameter and unmarked, was made circa 1712. It was copied from a Chinese model with double sides. The outer one was worked a jour. Decorated with lacquer painting in four colors.

Commercially speaking, the invention of porcelain occurred at the proper time; Europe was seized by an acute attack of chinamania. For about two generations, the merchantmen of the British and Dutch East India companies had been bringing home quantities of Chinese and Japanese porcelain.

The important people of those days, royalty and the princes of commerce, competed in committing follies in order to acquire these desirable objects. The best-known transaction of this sort is the deal of Augustus the Strong of Saxony with his royal neighbor of Prussia, who received the two tallest Saxon soldiers for his Garde-Regiment of “long boys” in exchange for his two largest Chinese vases.

That the secret of making porcelain had to be rediscovered in Europe is one of the incidents of history that is hard to account for. In the East, as far as we know, there was no secret about the making of porcelain. As early as the 13th Century, the famous explorer, Marco Polo, had mentioned it as produced from certain kinds of earth. Most probably, the merchants and captains of the East India fleet preferred taking home valuable merchandise to bothering about the methods of its production. 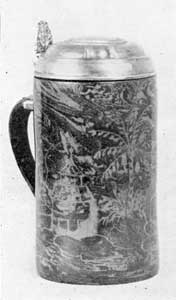 Illustration II: Tankard of Boettger: Porcelain: This unique piece, formerly in the Hearst collection, was made circa 1710. It has silver gilt mounting and is unmarked. It was copied from a tin model. The decoration was produced by incrusting of lighter shade on a darker background. It is eight inches tall.

Boettger did not succeed right away. He first made some reddish-brownish ware, the famous Boettger porcelain, which, scientifically speaking, is not porcelain at all. True porcelain most definitely consists of a paste of fired white caoline earth covered in a second higher fire by a transparent glaze, consisting chiefly of feldspar.

The Boettger porcelain shows a red paste without glaze. It was in good demand for a long time after the discovery, only a few years later of the white, real porcelain. The redware offered limited possibilities of decoration. It was either polished, cut like glass, or decorated with the heavy lacquer painting which also adorned the first white pieces (Illustration I).

The articles produced in the first years, in red and white, were mostly objects for the table: tankards (Illustration II), pots for the luxury drinks of those days — coffee, tea, or cocoa (Illustration III), and the like. The forms were either mechanical imitations of Eastern models, such as the tea caddy in Illustration IV, or copies of models in metal (Illustration II).

Some silver objects were expressly designed and made as models for the new china factory by the Saxon Court goldsmith, Irminger, such as the teapot in Illustration III. The evolution of this first model into the standard Saxon teapot can be seen without further commentary in Illustration V.

The entire development from the primitive attempts, both in form and decoration, into the full blossom of manifold quantities of models and styles of painting took place in the comparatively short time of fifteen to twenty years. 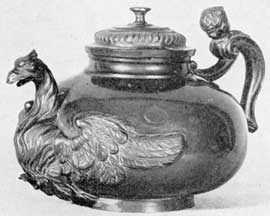 Illustration III: Boettger Porcelain Teapot: Copied from a silver model by Irminger, it was made circa 1712 and is unmarked. This piece was carefully polished. It is seven inches in width.

About 1725 we find our factory at its peak, turning out sets of services. The Dresden establishment soon was transferred to the fortress of Meissen. (The Germans speak of Meissen, the rest of the world of Dresden porcelain.)

Boettger, the inventor, was kept prisoner by his master during his whole life for fear of betrayal of his secret, the so-called arcanum which did not prevent one of his discontented helpers from escaping and starting the competing factories in Vienna and Venice, both around 1720.

Boettger died a few years after his invention. He had found a helper and, later on, successor in the person of the very talented painter Johann Gregor Horoldt, who is responsible for the invention and use of the real porcelain paints, consisting of metallic ingredients mixed with finely ground glass and bound by oil, which mixture is fired upon the translucent glaze in a third mild process. Only a certain blue, “cobalt,” is fit to stand the high temperature of the second fire. For that reason it could be used for painting underneath the glaze (Illustration VII). 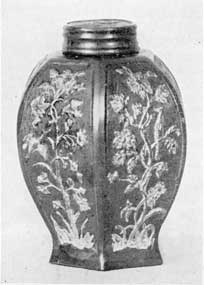 Illustration IV: Boettger Porcelain Tea Caddy: Made from a Chinese model circa 1710

Hoeroldt also perfected the art of gold decoration. In the beginning, gold had to be used in foils, sometimes engraved, which were fastened to the surface by transparent lacquer (Illustrations V — A and IX). One of his master achievements was the invention of an iridescent purple, the unmistakable sign of genuineness in old Dresden, which was counterfeited so abundantly, especially in France in the second half of the 19th Century.

As already mentioned, production in the beginning was limited to objects of practical use. Characteristic Dresden statues belong to the later rococo period. The few figures of the first twenty years comprised enormous animals. These were made for a palace planned by August the Strong, which was never finished. These animals were not sold to the trade.

There were two classes of figures of smaller dimensions that were sold to the trade which peculiarly enough have either distinctly Eastern or European characteristics. The Eastern ones are the pagodas (Illustration VIII) copied from Chinese Buddha figures, used as covers for the incense candles of those days, with perforated noses and ears to allow the scent of the candle to penetrate into the room.

The European products were caricatures of dwarfs (Illustration IX), which owe their origin to the famous drawings of the French caricaturist, Callot. These dwarfs were highly in vogue at that time and to this day, hewn in stone, can be found in many a park of central European castles.

Illustration V (A, B, C): Dresden Teapots Showing Development in Design: A — Made circa 1712-1715 and unmarked, was decorated with engraved gold foil attached with lacquer. B — Made 1720 and unmarked. Here the decoration was fired gold. C — Made circa 1725 and marked with the crossed swords. The decoration is polychrome painting in frames of iridescent purple. These are each six inches wide.

Outside of these types of figures there exist only a few copies of classic heads and statutes, so scarce that they need no mention. 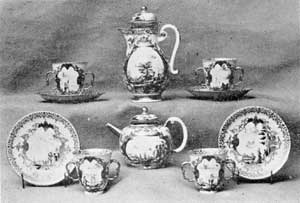 Illustration VI: Part of a Coffee Service: Made 1725-1727, these pieces have the crossed-swords mark — some underglaze and others overglaze. The decoration is scenes of commerce done in black and framed with iridescent purple and gold. The coffeepot is eight inches tall.

Early Dresden porcelain bears no mark. When the products of Vienna and Venice entered into competition, about 1725, the famous Saxon crossed swords were painted in underglaze blue on every single piece, and these swords have been the trademark of the Meissen factory to this present day. There were experiments with other marks, such as the Aesculapius staff and copies of Chinese emblems. Such pieces are rarities.

About 1725, unmarked pieces of older stock were sometimes combined with new ones (Illustration VI). When this happened the former ones were decorated with marks above the glaze, which procedure facilitates the sometimes difficult task of exact dating.

But even before the introduction of the swords, presents of Augustus the Strong to his royal neighbors and to his favorites, big vases were marked by a ductus of the royal initials. These marks are pompous, yet have harmonious grandeur that is a convincing document of the glory of those days. 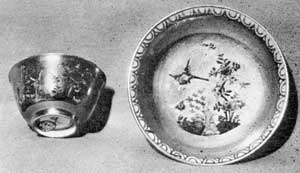 Illustration VII: Dresden Cup and Saucer: Made circa 1725 and bearing the crossed-swords mark, the decoration is the earliest of underglaze cobalt blue. The gilding is overglaze and fired. The cup is three inches in diameter and the saucer five.

Early Continental porcelain has been very scarce in the American market until a few years ago when special events, such as immigration, English shipments since the outbreak of the war of these most breakable among the easily destroyed object’s of art, and sales of collections formed abroad like that of Hearst, have furnished a freely flowing supply.

At present a number of private collections are now being formed, which promise eventually to become a valuable arsenal — a most welcomed fact as our public institutions, rich in treasures of other lines of art, are practically void of good early porcelain.

The rank which this primitive porcelain holds amongst the gems of artistic production of all times is best characterized by the words of William Honey, keeper of the South Kensington Museum of London, the biggest living connoisseur in this field, who in his preface to the catalogue of the collection from which our photos are published writes:

“It is in times of the excited discovering of a material or a technique that the finest work is achieved in the arts and such periods may well be called “primitive” periods, not with any implication of crudity, but rather in recognition of the fact that at such times the arts are as it were newly born, styles are nascent and materials inspire in the craftsman that respect almost amounting to awe, which is all too soon to disappear with an increased familiarity or the growth of a facile technique.”

Illustration VIII: Three Dresden Pagodas: Made circa 1715 and unmarked, each is decorated with fired gold — height, four inches.

Meissen ChinaJohann Friedrich Böttger, the father of Meissen porcelain, was a hard-drink…