Attorneys for the Elvis Presley Numismatic Trust announced today that dies, models, pattern coins, and documents describing the long-rumored Elvis Presley silver dollar have been uncovered in a storeroom at the U.S. Mint in Washington, D.C. 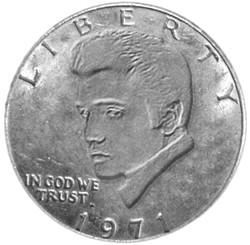 According to Presley fan and former Whitewater prosecutor Kenneth W. Starr, who filed a Freedom of Information Act request on behalf of the trust, the Presley dollar had been the pet project of former President Richard M. Nixon, who invited Presley to the Oval Office on December 21, 1970 to iron out the final details of the coin’s design, which was scheduled for release the following year. A photograph of that meeting, in which a smiling Nixon is shaking hands with the legendary singer, remains the most requested item in the National Archives.

“The Elvis dollar,” said Starr, “was going to have a profile of Mr. Presley on its obverse, with a scenic of Graceland on the reverse. President Nixon was quite keen to see the coin minted, but obstructionist bureaucrats in Washington torpedoed his brave and innovative idea and pushed through their preferred replacement coin instead.”

That coin, as most of us know, featured President Eisenhower on the obverse backed by a variation on the Apollo 11 insignia, which featured an eagle landing on the moon. “Those two images,” continued Starr, “never made any sense together. Now we have the documentation to prove that the Eisenhower dollar was actually the result of grueling political infighting, a dog’s breakfast of the first order.”

Starr and his team also appear to have uncovered evidence that the Elvis cache has been tampered with, although there is no indication of when this might have occurred. The problem concerns the pattern coins. According U.S. Mint documents, 14 Elvis dollar pattern coins were struck but only 11 were found in the storeroom—the whereabouts of the other three are unknown. Starr immediately called for a full investigation.

News of the coin’s near-entry into circulation drew choruses of dismay from Elvis fans around the world. “Eisenhower won World War II, served two terms as president, and warned the country of the dangers of the military industrial complex,” grumbled Enid Springrose of Red Cloud, Montana. “Big deal. How many gold records did he cut? Not even a one!” Added Jorge Quartzman of New Madrid, Missouri, “It’s a shame, because I think it would have promoted a whole new level of civility in our society that’s currently lacking. I mean, if a clerk hands you an Elvis dollar as a part of your change, what else can you say other than ‘Thank you, thank you very much’?”