This article describes royal commemorative glass, which became popular to celebrate the return and marriage of Charles II in the 17th century and continued through the 18th century depicting other important historical figures. It originally appeared in the September 1943 issue of American Collector magazine, a publication which ran from 1933-1948 and served antiques collectors and dealers.

“All the discourse now-a-day,” wrote Samuel Pepys in the spring of 1660, “is that the King will come again; and for all I see, it is the wishes of all; the soldiers at Dunkirk do drink his health in the streets. Great joy at London and ringing of bells, and drinking of the King’s health upon their knees in the streets, which methinks is a little too much. But everybody seems to be very joyfull in the business.” 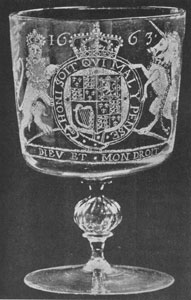 Illustration I: The Royal Oak Goblet: Decorated with line and diamond cutting, this goblet, dated 1663, bears the royal coat-of-arms of Charles II, a portrait of him and his bride, Catherine of Braganza. There is also a depiction of the king hiding in the Boscobel oak and the legend "Royal Oak." Made to celebrate the marriage of Charles II and Catherine. Probably the work of the Venetian glass blowers employed in the glass house established by the Duke of Buckingham at Greenwich.

The years of the Commonwealth were at an end, leaving an England rebellious of the rule of sword and tired of Puritan dourness. Oliver Cromwell was dead, leaving no strong successor. Consequently moderate Roundheads and Cavaliers were agreed that the only way to avoid anarchy was by restoration of the monarchy in the person of the Stuart heir.

So Parliament called him back from his exile in Holland and on May 26, 1660, Charles II landed at Dover, proceeded to London and was welcomed there three days later with vast enthusiasm. This happy event, as well as his subsequent coronation and marriage were commemorated in various ways, but perhaps the most interesting medium employed, for collectors at least, was that of glass.

In fact, among those “joyfull in the business” must have been the makers and dealers in fine crystal. In 19th Century parlance, theirs was a luxury business and for them the Civil War and Commonwealth represented nearly twenty lean years. With the Restoration, glass once more had popular appeal, was no longer frowned on as a symbol of vanity, extravagance, and riotous living.

Illustration II: Equestrian Portrait of William III: Here he is depicted with military baton in his right hand. This wine glass with air twist stem above a pressed inverted knob and resting on a domed base was made between 1730-1740, probably as a memorial.

Less than three months after the royal landing at Dover, the name of George Villiers, second Duke of Buckingham, became associated with the glass industry. He was neither a businessman nor a glass expert, but his financial investment was useful and his position assured the patronage of the upper classes.

The famous “Royal Oak” goblet (Illustration I) is believed to have been made at his Greenwich glasshouse by Venetian workmen imported from the continent. It is not only interesting as commemorative glass but is a fine example of early Restoration work. It was made in celebration of the marriage of Charles II and Catherine de Braganza of Portugal. The latter was described by the diarist Evelyn as “prettily shaped, languishing and excellent eyes, her teeth wronging her mouth by sticking a little too far out; for the rest lovely enough.”

This goblet of brownish, thin-blown glass was handsomely engraved to represent not only the King’s marriage but his former misfortunes. In addition to the portraits of the royal pair, the royal coat of arms, and the date, 1663, there was also a portrait bust of Charles II, enclosed in a medallion among the branches of an oak tree. The latter of course was in memory of the night following his defeat at Worcester, which the young Charles spent hiding in the branches of the Boscobel Oak and so escaped the victorious Roundheads.

Although Restoration commemorative glass is naturally very rare today, it was undoubtedly popular and made in fair quantity for the clientele that could pay for it. W. A. Thorpe in his book, English Glass, mentions other examples still extant and states that nine “King glasses” are recorded on July 16, 1665, in household accounts of Sir Richard Wynne, who was a member of a well-known Royalist family.

The “Royal Oak” glass was for many years on loan at the Victoria and Albert Museum as part of the Joseph Bles Collection in London. It, along with other fine pieces, was later acquired by the late George Horace Lorimer and is now part of the large glass collection which he bequeathed to the Philadelphia Museum of Art. 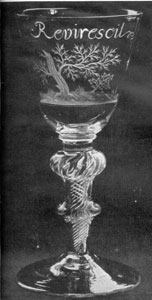 Illustration III: The Revirescit Goblet: Beneath the wording the decoration is that of a stricken oak with a young sapling springing up nearby. On the reverse are engraved an eight-petalled Stuart rose and two buds. The stem has in air twist with double knobs. This goblet relents the efforts of the Stuarts to regain the English throne. Made about 1750, it is commemorative of the defeat of the Young Pretender at the Battle of Culloden.

Royal history was also recorded in glass throughout the 18th Century. Here the glassmakers found plenty of decorative subject matter in the persistent feuds between Jacobites and Williamites. In tune with the fashions of the era, the glass was rococo in style and decoration, but the motif reflected the political convictions of the person who bought it.

For the Jacobites, the Stuart rose was a favorite decoration on their wine glasses; for the Williamites, portraits of William and Mary or of William alone were engraved on wine glasses, decanters and goblets. Some of the latter bore the date of the victorious Battle of the Boyne, 1690.

That William and the cause he symbolized were remembered long after he had passed to his reward as the result of a fall from his horse, is attested by a wine glass (Illustration II) blown and engraved sometime between 1730 and 1740. This has for its decorative motif a finely engraved equestrian portrait of William III holding a baton.

Illustration IV: Success to the Duke of Cumberland: This glass, made about 1750 with air twist stem, inverted cone knob and domed foot, depicts a profile of the Duke of Cumberland, son of George II. It commemorates his victory at the Battle of Culloden over the Young Pretender, popularly known as Bonnie Prince Charlie.

In addition to the Stuart rose, the Jacobites had the now rare “Amen” glasses, produced in 1715 when the Old Pretender was struggling to regain the throne. Such glasses were decorated with the Jacobite anthem which ran as follows:

By the middle of the 18th Century, both factions had fresh material for the glassmakers. The Young Pretender, “Bonnie Prince Charlie” of Scottish folk song had attempted to ascend the throne and been defeated at the battle of Culloden in 1746. For the romantic and persistent adherents of this continually lost cause there were goblets bearing the portrait of the Prince in profile facing to the right, with one known exception which faces left. Another design bore the inscription “Revirescit” above a stricken oak with a new sapling springing from the ground beneath it. (Illustration III.) This was of course significant of the lost cause of the Old Pretender and the new hope rising with his son.

Illustration V: A George III Goblet: This was decorated with painted enamel in colors and bears the signature of the artist, "Beilby N. Castle invt. & pinxt." The decoration on one side is the Prince of Wales Feathers and on the other the Royal Arms and motto as borne by George III. Made about 1762 to commemorate the birth of his eldest son, later George IV.

There was at least one design for the victorious Williamites. (Illustration IV.) This was a glass inscribed “Prosperity to the Duke of Cumberland” with a portrait of the Duke below, blown and engraved about 1750. He was the second son of George II and the engraved design commemorated his victory over Bonnie Prince Charlie at Culloden.

Probably one of the handsomest pieces of glass representing royalty was that made in 1762 to celebrate the birth of the future George IV. (Illustration V.) Colorfully enamelled with the Royal Arms as borne by George III and the three feathers of the Prince of Wales, it bears the signature “Beilby Castle invt. & pinxt.”

This signature makes it doubly important for the Beilby family was an accomplished one. William who probably painted this goblet, his sister Mary and brother Ralph were children of a Durham silversmith. William (1740-1819) and his sister Mary (1749-1797) were glass painters of exceptional merit from about 1762 to 1778. Their brother Ralph (1743-1817) was a successful silversmith and engraver and probably helped William with this particular commission.