Today’s guest blogger is pen collector Rick Propas, who runs The PENguin, a website devoted to Pelikans, Parkers, and other German and American pens. 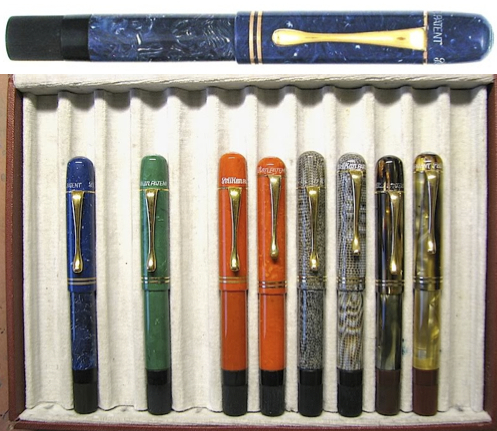 Like most collectors, those of us who pursue pens have a Holy Grail that we burn for, even while recognizing that we may never find it.

For me that pen was the lapis blue Pelikan 101. The 101 model was made in five different colors and two different configurations in very small numbers from 1935 until 1938. Before I found my lapis 101, I had about five of the 10 possible variants (see photo above for the current state of my 101 collection), at least one in each color except the blue. Few of my German pen friends had a blue and there were none known to me in the United States.

Generally these pens change hands very quietly, from collector to collector, but I found mine on, of all places, eBay. I put in my bid and it held for a few days.

We had opera tickets on the afternoon the auction was scheduled to close, so I upped my bid to my maximum (this was before smart phones), figuring we’d find some way to pay the next month’s mortgage if I won. I enjoyed the opera, but drove home a bit more quickly than usual to see which dirty rascal had taken “my” pen, assuming it was not to be mine.

When we arrived home, I immediately went to the computer and clicked the ‘update’ button to see the auction’s results. Impossible! Mine was the highest bid, the winning bid. And on top of it all, the amount was nowhere near my maximum.

Later, I spoke with one of the leading Pelikan collectors in America and asked him why he had not bid. He looked at me, puzzled. What was I talking about? He had not seen the auction. Indeed, it appeared that no one had seen it. Well, almost no one.

Fountain PensAfter centuries of writing with quills dipped in ink, people in the 1800s b…