This article discusses 18th-century American military buttons, noting that information on these buttons is scarce and describing the different uniforms and military buttons that were worn. It originally appeared in the January 1946 issue of American Collector magazine, a publication which ran from 1933-1948 and served antique collectors and dealers.

American military buttons of the eighteenth century are comparatively rare, and the two recently acquired New York State Militia buttons illustrated are, for me, a noteworthy addition to an all too small group of historical buttons. 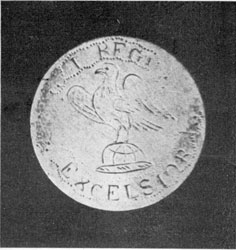 Button with Eagle, and motto "Excelsior," and additional markings of the First Regiment.

The buttons are of sheffield plate, engraved by hand with the crest and motto of the State of New York; and one has the additional marking of the First Regiment. They are slightly over one and one-eighth inches in diameter and are silvered on only one side, as was quite customary among buttonmakers, even up to the time electroplating came into use.

There are eight of the First Regiment buttons and a single specimen of the other type. All the buttons in the set of eight show the slight variations characteristic of hand work, and the eagle on the other button is very different. All of them resemble doves more closely than the war-like bird they are supposed to represent.

The information readily available on the subject of military buttons is surprisingly scant, although it has been a subject of much interest for a good many years. There are several fine museum collections of which the Emilio collection in the Essex Institute of Salem, Massachusetts, the collection of the New York Historical Society gathered in field exploration expeditions under Mr. William M. Claver, and the collection of Mr. Reginald Hart, now preserved by Mr. Lightner in his Hobby Museum in Chicago are outstanding.

Captain Emilio presented his collection to the Essex Institute in 1908 and the New York Historical Society field explorations began in the early 1920’s, so interest in this phase of collecting is no new thing. The Emilio collection, which comprises 1174 military buttons, both American and foreign, shows only nine American buttons of the Revolutionary period and fewer than one hundred before 1816, although the specimens of the British army during the early period are more plentiful. The New York collection is much more complete for this period, as their finds were made by excavating on old Revolutionary camp sites. 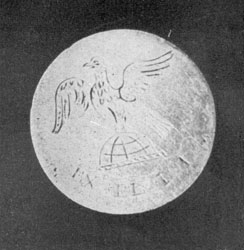 Similar button without markings of the First Regiment.

The custom of numbering regimental buttons began as far back as 1762, when the French originated the system. Five years later British military dress regulations prescribed the use of numbered buttons; and in July of 1775 the Massachusetts Provincial Congress issued such instructions. In the fall of the same year the Continental Congress ordered the commanding officers of all state regiments to arrange with the Quartermaster General for suitably numbered buttons.

How completely this order was carried out is a question, as there were fifty-eight different state regiments serving with the Continental Army. Washington’s army was notedly a ragged group, no uniforms were provided for men serving for limited periods, and even for the regulars, the supply was far below the need. Most of the buttons used by private soldiers were cast of pewter or lead in hand molds similar to bullet molds. Often this was done by the soldiers themselves while in winter camps, and the results were very crude.

Officers fared better, and most of their buttons were of the kind made by capping a mold of bone, horn, or wood with a thin metal disc. The workmanship on such as survive of this type is excellent; the buttons are well designed and very handsome. But most if not all these buttons were made in France; and when, after about 1779, uniforms also began coming from that country the probability is that they were fastened by buttons with some sort of general service design.

In 1779, General Washington designated the type of uniform to be worn, and prescribed yellow metal buttons for the Artillery and Artillery Artificers, and white metal buttons for the Infantry and Light Dragoons. One general order of that year referring to troops raised in New York and New Jersey specifies five regiments. “Their Uniform Blue faced with Buff White Lining & Buttons, White Vests and Overalls.” The fife and drum were to wear buff faced with blue, “Trimmed with Blue Tape & Epuletts.” Five companies of artillery were to wear “Blue faced and lined with Scarlet Yellow Buttons and Tape,” their fife and drums to wear scarlet faced with blue. The Dragoons’ uniform was “Short Blue Coats, white facing & lining, white Buttons & Under Cloaths.” 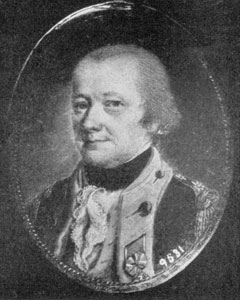 An account rendered by the State of New York to the Continental Congress includes 974 gross coat buttons for two hundred and twenty-one Pounds, one shilling and one penny; and four gross shirt buttons for four Pounds, eleven shillings and four pence.

The First New York Regiment was from Albany County and was commanded in 1775 by Colonel Alexander McDougall. In November of 1776 Colonel Goose Van Schaick took the command, which he retained until January of 1782. Most of the militia regiments served willingly enough in home defense but were not willing to join with the Continental Army for duty farther afield. The New York First Regiment, however, was one of the units taking part in the siege of Yorktown in 1781. The State arms, of which the crest and motto, “Excelsior,” are a part, were devised in 1776 by a committee appointed by the Provincial Assembly for that purpose.

Certainly the buttons are of the type used prior to 1800. About that date, slightly earlier in England, button makers began stamping their names or at the least the quality of the buttons on the backs. Often just the word “plated” occurs.

My buttons have plain copper backs, on which no vestige of silver shows, and the hand applied shanks are all of center, as in older buttons. Both types are of the same period, and the one without the First Regiment marking could have been that of a General Officer.

ButtonsAs long as human beings have needed to keep their clothing fastened, button…