Flipping Out Over Handheld Movies 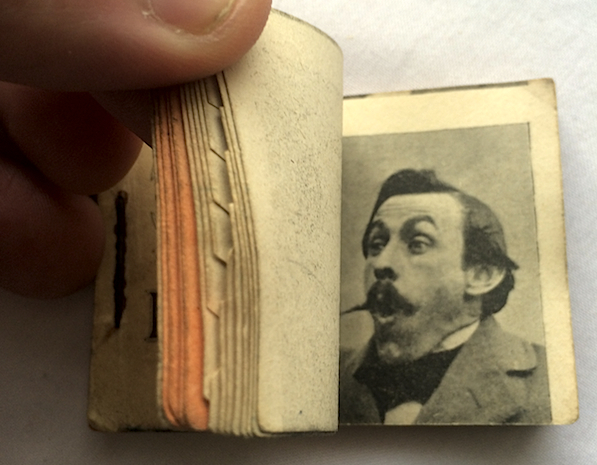 When artist Ben Zurawski sits down at his light table to create a palm-size flip book designed to deliver about 15 seconds of animated action to one viewer at a time, he typically unwraps a fresh pack of 100-pound index cards, places 60 or so before him, picks up a mechanical pencil, and begins to draw. From start to finish, including storyboarding, penciling, rubbing out mistakes with a wadded-up ball of gum eraser, inking, and stapling, the whole process can take a week, maybe two, depending on its scope. Price tag: Just under $400.

“Movie studios gave away a lot of flip books to show off their stars.”

In contrast, it can take the animation supervisors and coordinators toiling away at a major Hollywood studio a solid month to mobilize the efforts of multiple animators—often in different countries—before 15 seconds of film (that’s 360 frames at 24 frames per second) are ready to be delivered to the nation’s multiplexes. Price tag: About $1,000 per second of screen time for the labor alone. Add in marketing and distribution costs, though, and that initial price tag looks like a bargain. 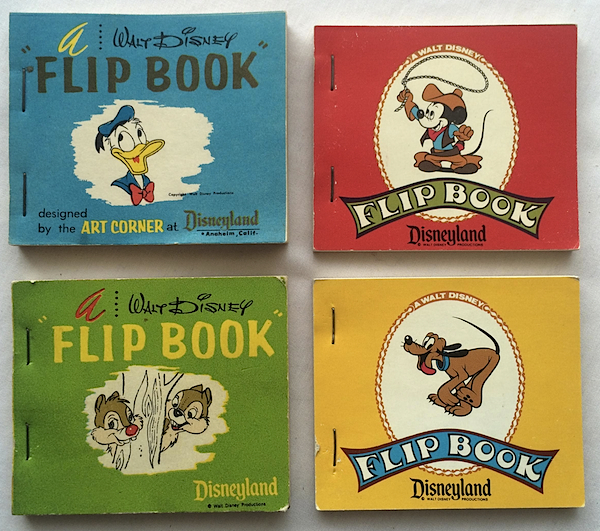 Top: A page from a flip book produced for the Bon Marché department store in Paris showing a man expressing fear. Above: A group of flip books from Disneyland.

Obviously, it’s ludicrous to compare a handmade, animated flip book to a few seconds of would-be Hollywood blockbuster. After all, a flip book is a physical object that’s held in one hand while the thumb of the other turns the small book’s pages so quickly, the images on those pages blur and appear to come to life. Not counting the effort it takes to reach into a bag of popcorn and toss a few kernels into your mouth, movies are entirely passive affairs.

But the serially self-congratulatory film industry would not be the hype machine we’ve come to loathe and love were it not for inventions such as the flip book, which was patented in the United Kingdom in 1868 and again in the United States in 1882. Along with the Phenakistoscope in 1832 and the Praxinoscope in 1877, the flip book was a key forebear of the first motion pictures produced by the Lumière brothers in 1895. For better or worse, we might not have Academy Awards without them.

As both a creator and collector of flip books, Zurawski brings a unique perspective to this venerable, if somewhat primitive, form. He came by his passion in a way that sounds like it was lifted from a Hollywood script. As a young lad, he was granted access to his dad’s sacred stash of private stuff, which included a handful of flip books.

“My dad had a room in our house that was like his personal museum,” Zurawski says. “He had shelves on the wall, with just layers and layers of tin toys, weird books, LPs. He wasn’t into collecting super-expensive things—he worked at a college bookstore his whole life—but he loved finding treasures at thrift stores and garage sales.”

Of all the objects in his father’s various collections, the small flip books made the biggest impression on the boy. “I remember being mesmerized,” Zurawski says of his first flip-book encounter. “Cartoons were things you only got to see on TV, but with a flip book, I could make animation happen with my own hands.”

At the end of the 19th century, chewing-gum maker Fleer gave away sports-related flip books such as this one of two boxers.

About 15 years later, by the time Zurawski was in high school (he’s now in his early 30s), his father had passed away. “Maybe I was looking for a way to reconnect with him,” Zurawski says, “but I started getting into animation. I got my first flip book as an adult, and then it sort of steamrolled from there, until I was making and collecting them full time. Now it’s an all-consuming part of my life.”

In his search for examples, Zurawski taught himself how to identify flip books when browsing online listings, primarily on eBay sites beyond U.S. borders. “There are probably 20 different search terms you can use to find flip books,” he says. “Every country tends to have its own name. In England, they call them flick books or flicker books; in France, they call them flip books but also folioscopes; and in Germany, they are known as Daumenkino, which I love. It’s a great name, meaning ‘thumb film.’”

As a creator of new flip books, Zurawski is inspired by the old ones he’s collected. They guide his craft, both in terms of the tricks employed by generations of artists to make the animation effects between pages smooth and seamless, as well as how the books are made. “I have some flip books that are well over 100 years old,” says Zurawski, “so I can see at a glance what lasts over time. I stay away from glue binding—some of the older books I’ve collected that were glued are now cracked. I use a heavy-duty staple, good bookbinding tape, and heavy weight paper. Then I put a plastic cover on the book to prevent it from getting all torn up.” 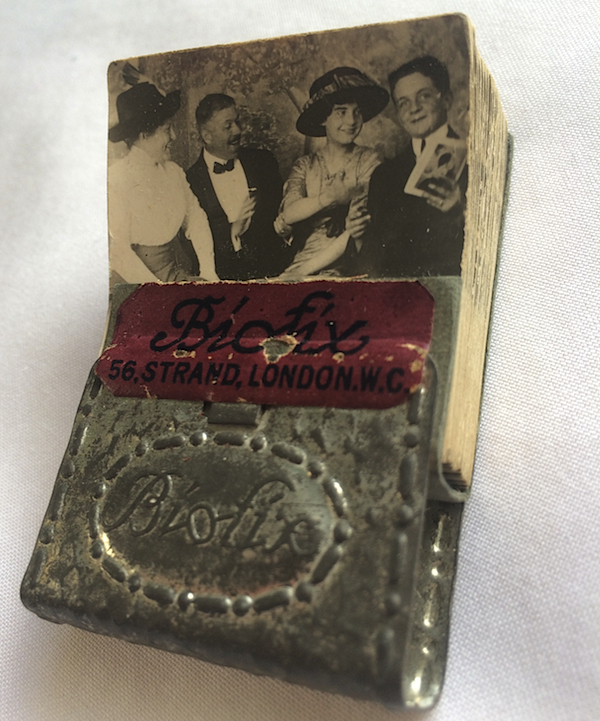 The cover of one of Zurawski’s favorite flip-book series sports an even more durable material—tin, embossed to resemble the outside of a fancy leather-bound book. “The series is known as Biofix,” says Zurawski, “and it started in the late 1800s. Biofix was a company in London, Paris, and Brussels. People would sit in a photo booth and have a short scene of themselves filmed, like a husband and wife kissing or a family getting together. I have one of a little boy making faces. They’re like moving Polaroids, because there would only be the one copy of the flip book. There were no extras made, so they’re special, and they look really cool, too.”

Most flip books were produced as commercials or premiums for products, like the sticks of gum that used to be packed with baseball cards. “I have a Cracker Jack flip book that features Charlie Chaplin in a short scene from his 1915 movie, ‘The Champion.’” In fact, movie studios gave away a lot of flip books to show off their stars, whether they were live-action actors like Shirley Temple or animated icons like Felix the Cat. Which is kind of curious when you consider that flip books were one of the forms that gave entrepreneurs the idea to make live-action movies and animated cartoons in the first place. 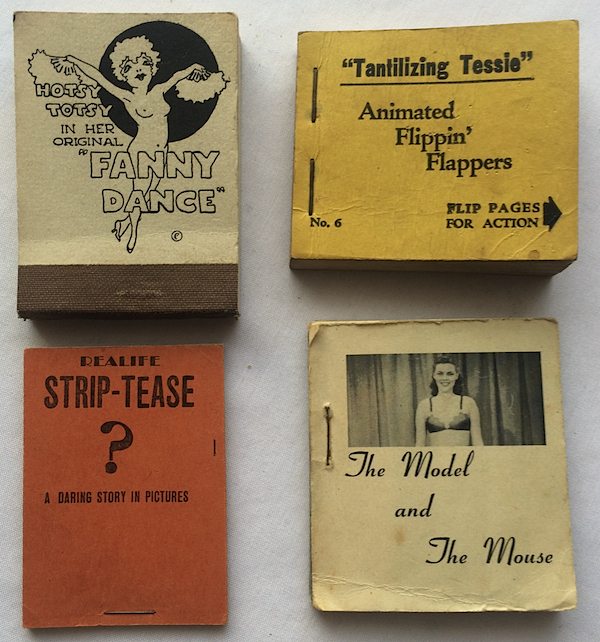 Today, car companies still commission flip books (Zurawski made one recently for the Ford Mustang), as do distillers, shoemakers, and fashion houses. Nor is Zurawski the only artist exploring the form—Julian Opie, Sol LeWitt, Keith Haring, Gilbert & George, Bruce Nauman, and Tony Oursler are just a few of the artists who have remade humble flip books into small works of art.

At the other end of the respectability spectrum, of course, is the risqué stuff. “If you want to be classy about it, you’ve got to call it erotica,” quips Zurawski. “Yeah, there’s definitely plenty of that. There’s this whole series where, you know, on the cover there’s a lady with all her clothes on, and by the end, not much of it remains. But that’s just one of many categories.”

Zurawski has them all, but unlike his father’s bulky toys and records, Zurawski’s 1,000 or so flip books don’t need a room of their own. “My wife collects brooches,” he says. “We have an old-fashioned printer’s cabinet where we keep both of our collections. The good thing about flip books is you can store them in a reasonably small space.” 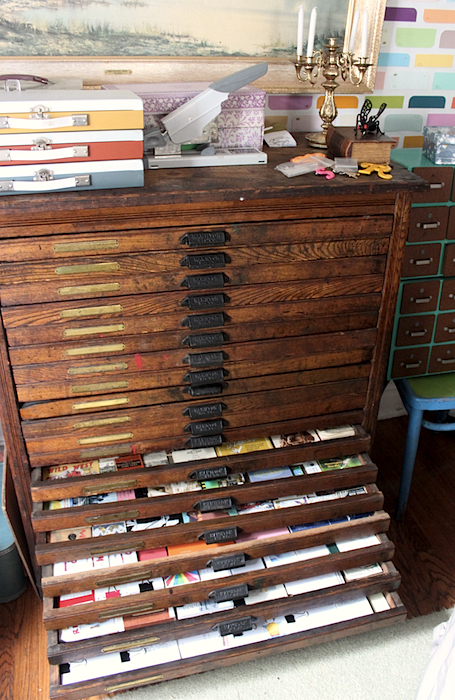 The majority of Ben Zurawski’s flip-book collection fits in an old printer’s cabinet.

In fact, Zurawski’s studio footprint could be even smaller if he was inclined to use digital tools to create his analog products, which, happily, he is not. “I really hate getting involved with computers—the printing, the aligning, all that stuff. I prefer to work by hand. I like that I have put some sweat and labor into it. It makes it more special.

“I just finished another wedding proposal,” he continues. “It will be presented along with the ring, which is kind of a crazy honor. I’d feel like a jerk if I had just designed it on a computer and printed it out.” 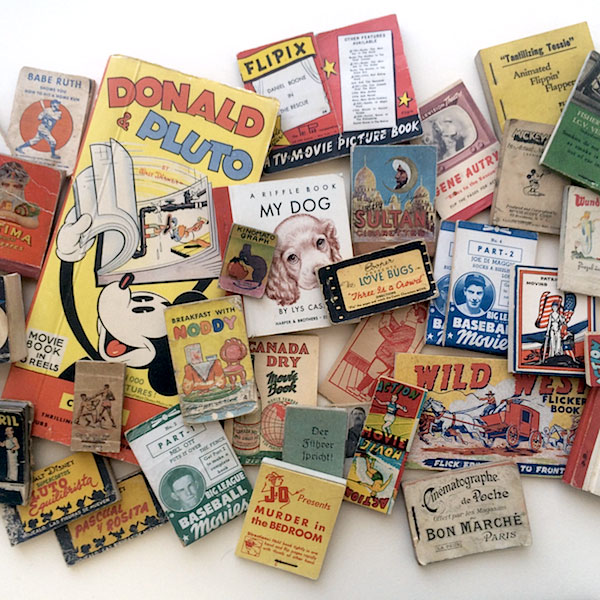 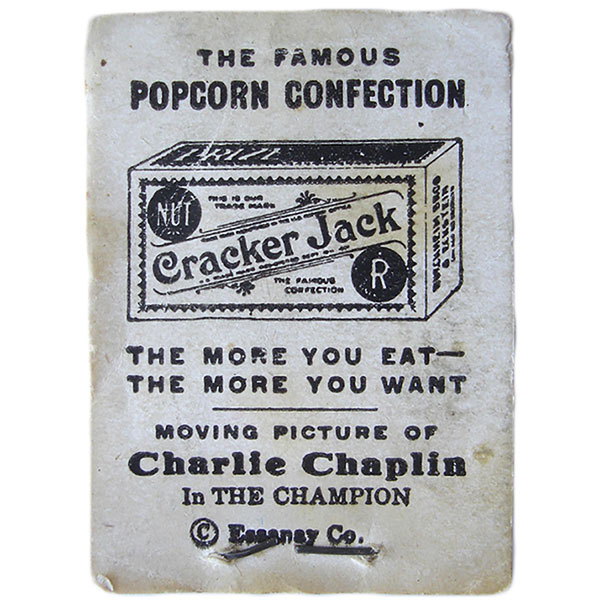 In 1915, one Cracker Jack surprise was a tiny flip book featuring a scene from Charlie Chaplin's latest silent film.

Flip books were perfect for instructional booklets, such as this one that shows you how to twirl a baton. 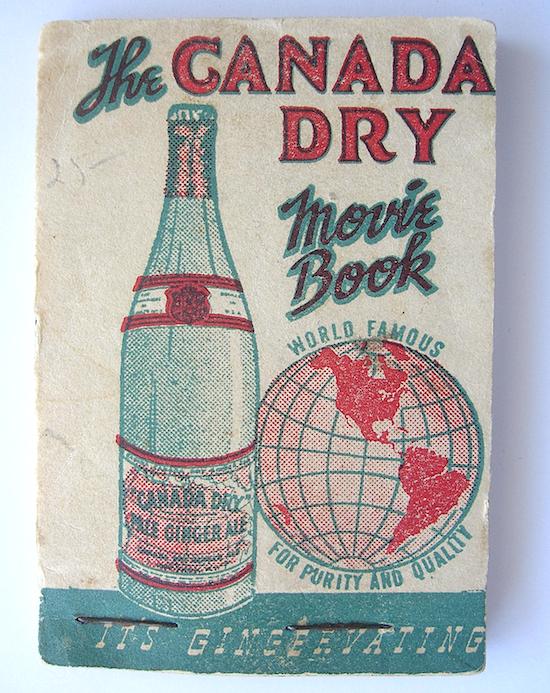 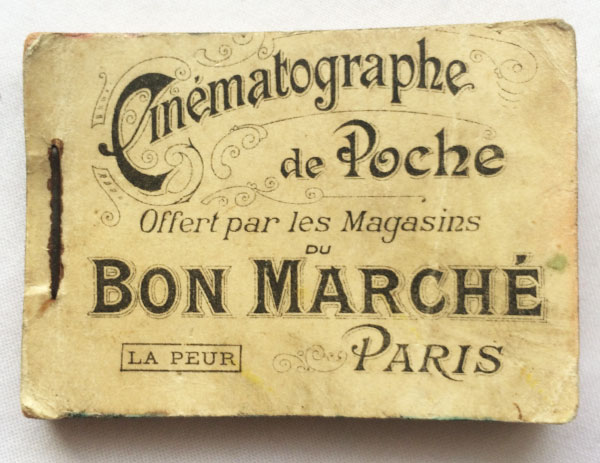 Flip book covers were often plain since the graphic interest awaited inside. 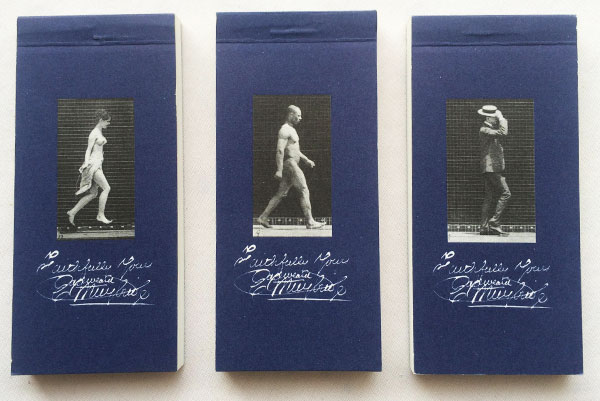 These flip books celebrate the work of Eadweard Muybridge, whose sequential photographs studied the mechanics of motion.

The content of flip books did not need to relate to the products they were packaged with. Anything that showed motion (in this case, dancing) was fair game. 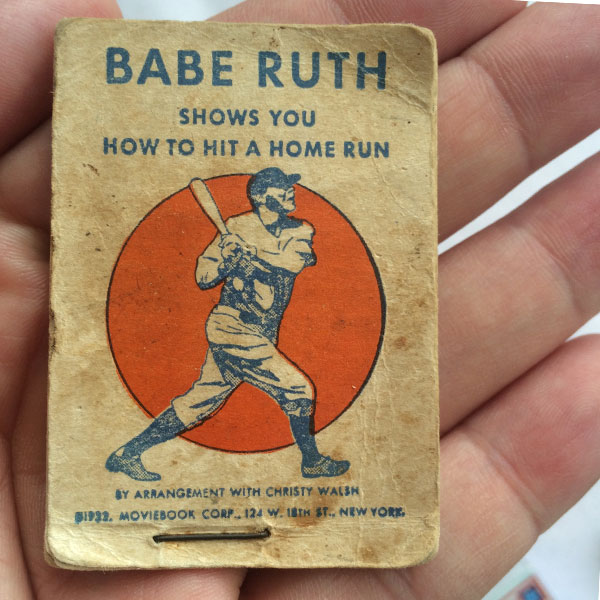 Flip the pages of this palm-size guide, and you, too, will be hitting 'em out of the park like the Babe. 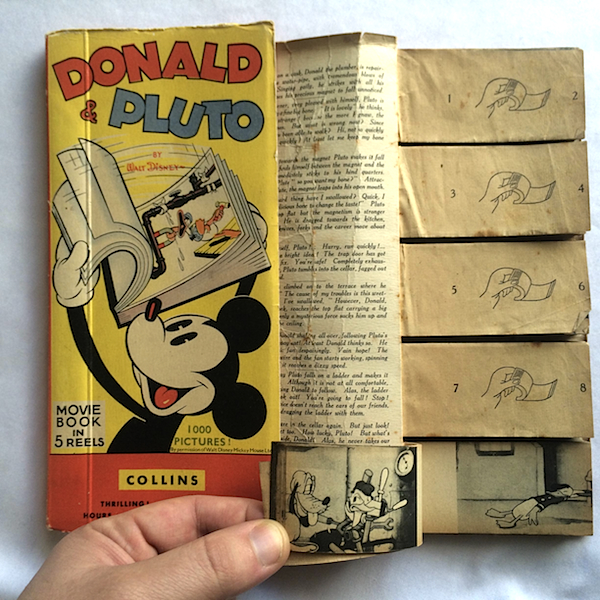 This Disney book actually had five flip books, each of which could be viewed from either side for a total of 10 short "films." 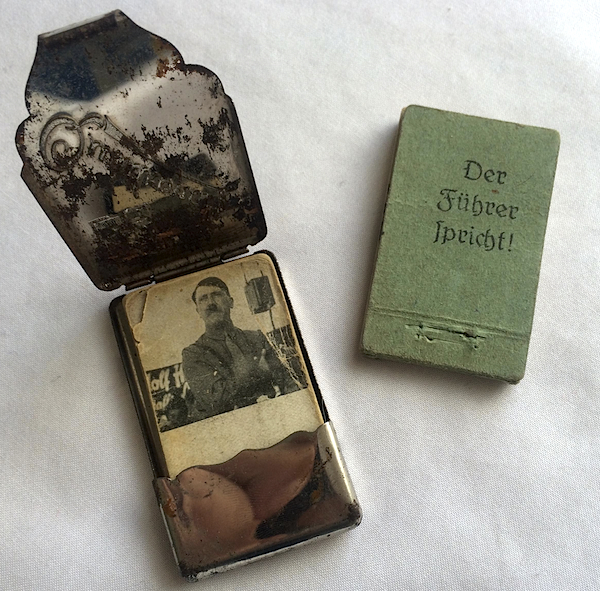 A flip book featuring a Hitler speech from the 1930s. This book was protected by a small metal case. 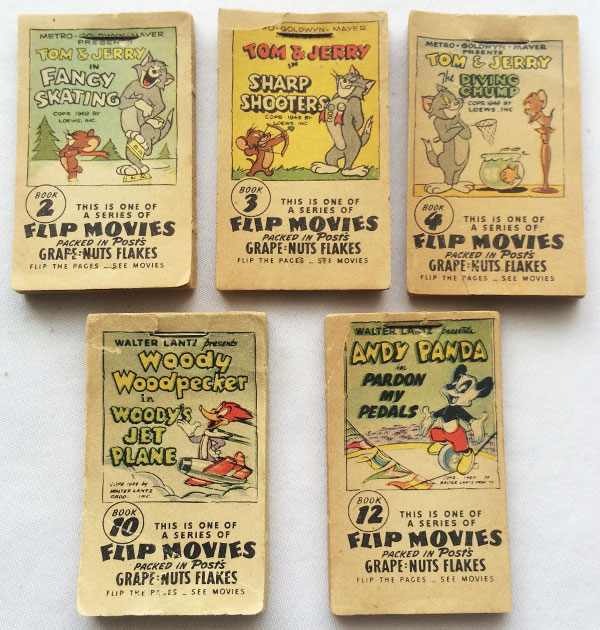 Just a small sample of the cartoon flip books packaged into boxes of breakfast cereal. 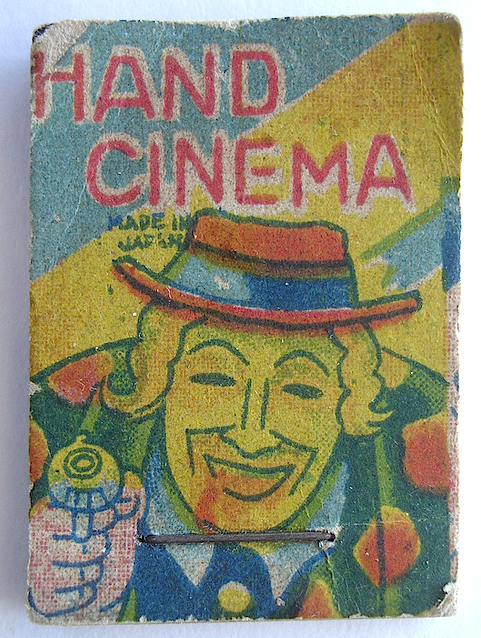 While most of Zurawski's collection includes flip books from the U.S. and Europe, he also has a number of fine pieces from prewar Japan. 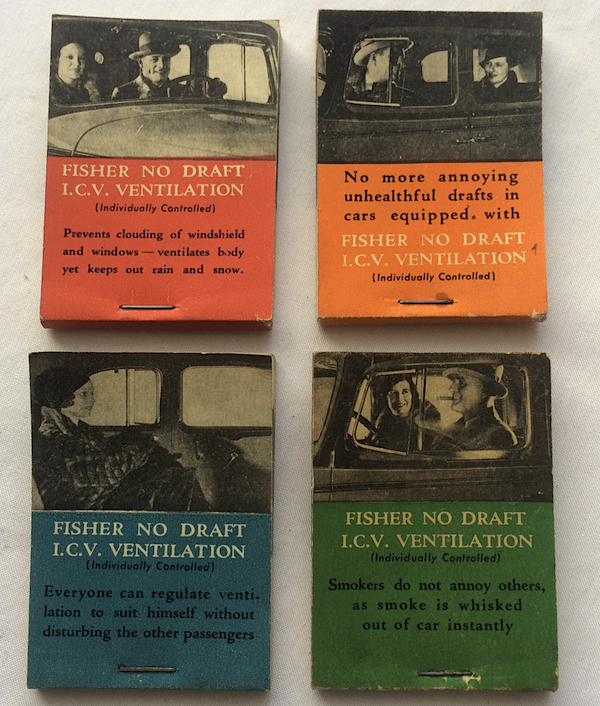 In a more innocent time, someone thought flip books would help sell features on cars. 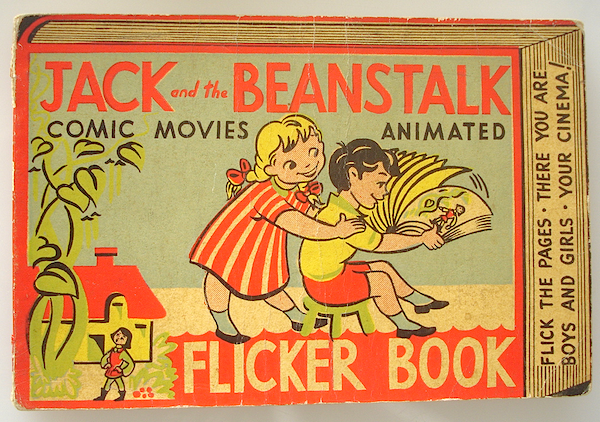 A flicker book from England, made for kids. 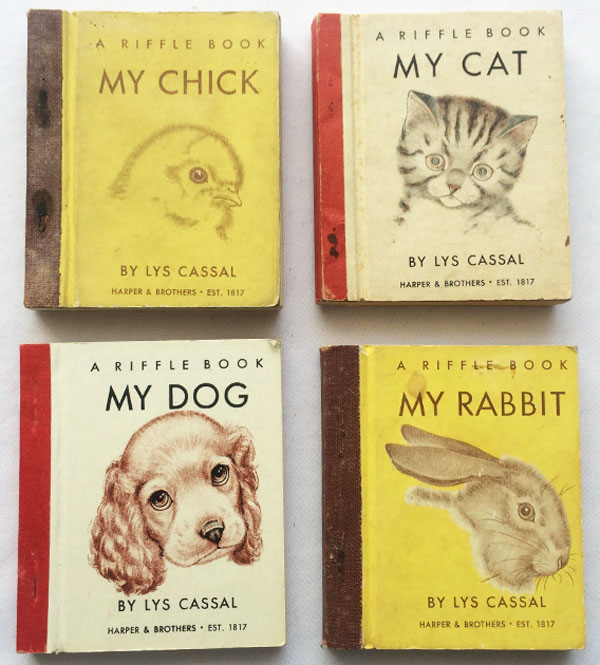 Children were obviously the target audience for these simple flip books.

This title was allegedly written to help women prepare for sex through exercise, but leering men were the more likely audience. 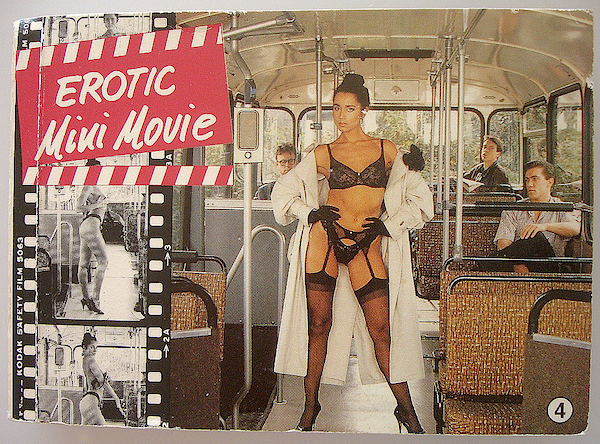 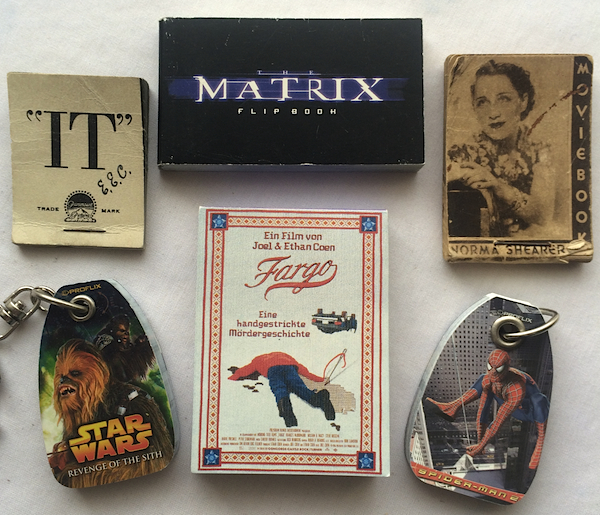 Hollywood has long used flip books to promote actors and movies, as this collection of past and present flip books shows.

Patriotic themes are also a popular subject of flip books. 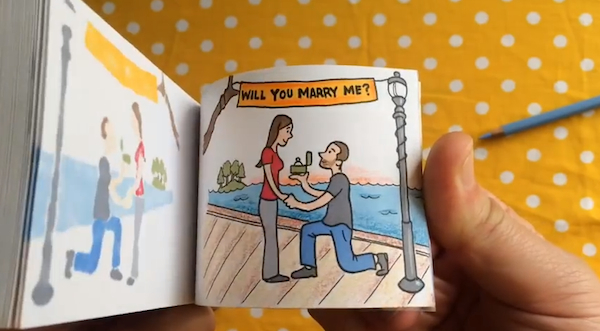 As a flip-book maker, Zurawski is regularly asked to create narratives designed to help break the ice during a marriage proposal.

(All images courtesy of Ben Zurawski. To have him make one for you, visit TheFlippist.com. To see more videos of flip books from Zurawski’s collection, visit his YouTube page. For more information about flip books in general, visit Pascal Fouché’s terrific site, FLIPBOOK.info.)

Dawn of the Flick: The Doctors, Physicists, and Mathematicians Who Made the Movies

From Little Fanny to Fluffy Ruffles: The Scrappy History of Paper DollsWarning! These 1950s Movie Gimmicks Will Shock You

PaperBefore the Internet reduced all correspondence and information to colorless…