This article discusses the Forestville Manufacturing Company, noting the company’s origins, the clocks that they made, and the labels that they used to mark their products. It originally appeared in the September 1947 issue of American Collector magazine, a publication which ran from 1933-1948 and served antiques collectors and dealers.

The name and label of the Forestville Manufacturing Company marks some fine and intelligently made Connecticut shelf clocks. This company was a prolific source of clock making from the 1830s to the 1850s. A large number of its clocks, still running well, are today in the hands of discriminating collectors. 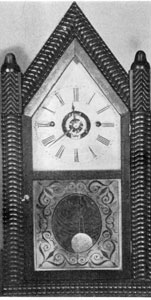 1. Gothic-style (steeple) clock of the third period (1842-49), bearing on the label the name combination of Forestville Manufacturing Company and J. C. Brown.

The year 1855 being about the last date the name was used, many Forestville clocks are now over 100 years old. Almost all the printed data about Forestville clocks having proved at least slightly in error, the present study is an attempt to give (with thanks to Edward Ingraham, Lockwood Barr and others) an account of the firm from sources believed to be correct.

The firm originated in 1831 with a company that made clock cases then turned to making complete clocks; later branched out to make hardware; had the usual severe fire — company records get destroyed in a bad fire — and finally failed in 1855. Famous clocks bearing the Forestville name include double and triple deckers with accurate 8-day weight driven brass strap movements, acorn clocks, twin and blunted and steeple clocks and any number of others.

The story appears to start and end with an ingenious gentleman named Jonathan Clark Brown, Tr. (1807-72). In Bristol, Connecticut, in 1831 Elias Ingraham and William G. Bartholemew were in business together making clock cases. In September, 1832, T. C. Brown bought out the Ingraham interests and changed the name of the firm to Bartholemew, Brown and Company (1832-34). They then began making complete clocks, some of which, still bearing their label, are extant today.

Forestville is about two miles east of Bristol. Its name came from a description of the surrounding landscape, described as “a complete forest.” There a tract of land was purchased by Brown, Bartholemew and four others — William Hills, Chauncey Pomeroy, Tared Goodrich and Lora Waters. 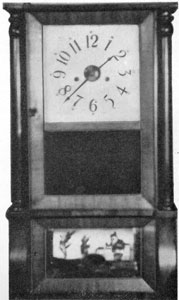 2. Forestville clock of the first period (1835-39) strap brass movement, solid escape wheel and a 20-inch pendulum in an Empire-style case.

Little data about these men, other than Brown, has been discovered. Bartholemew, possibly a kinsman of Eli and George W. Bartholemew, of hollow-column clock fame, was reported to be a good salesman. Hills came from Farmington. Pomeroy previously may have made clock movements. Goodrich was a kinsman of Chauncey Goodrich. From what evidence there is, T. C. Brown seems to have been the chief figure in the enterprise.

Once the tract of Forestville land was cleared, the trees felled and the water rights secured, a dam was thrown across the Pequabuck River and a bridge put over it for a road that led to the Farmington Canal (opened 1826). Here the Forestville Clock Factory was built. Production began in 1835 under the name of Forestville Manufacturing Company, successor to Bartholemew, Brown & Co. Was this the earliest use of “manufacturing” in a firm name? It is supposed to be.

The first clocks made at Forestville were the larger 8-day strap brass weight driven shelf clocks in pleasant cases of veneered mahogany. These clocks usually were in three sections (fig. 2) — face, mirror, and tablet (painted scene). They had round side columns, a flat top, no feet, and they were in the Empire style. They can be identified by the strap brass movement (rolled brass still being too expensive), with a solid escape wheel, a 20-inch pendulum and a paper label reading:

The dates of this partnership are 1835 to 1839. Evidently they somehow weathered the depression of 1837. 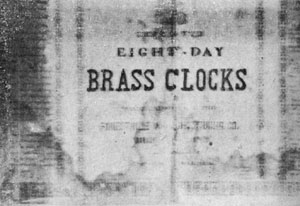 3. Label pasted inside the clock pictured above.

That these facts do not tell all the story of Forestville’s first period is readily admitted. For example, there is owned by James Phillips of New York a clock with the above described movement cased in an “OG on an OG” (fig. 4). It bears the label quoted above except that only the names of J. C. Brown and C. Goodrich are mentioned. The label was printed by Huyler & Richey, Book and Job Printers of 26 Bleecker Street [New York]. Further to complicate the issue, there exists from this first period a three-decker 8-day clock with brass movement which bears a label, FORESTVILLE MFG. CO., without names.

In 1840-41, operations were conducted under the name of Hills Brown & Co. Brown bought out Hills and changed the name to J. C. Brown & Co. (1842-49). Brown, now controlling the company, used on his label both FORESTVILLE MANUFACTURING COMPANY and J. C. BROWN together. There are many clocks in existence with this name combination (fig. 1). It is believed that the label bearing the names of the four men in the lower right hand corner is on Forestville clocks dating 1835-39.

These labels were printed by the press of J. G. Wells, 26 State St. The usual directions about making the clock run are included. 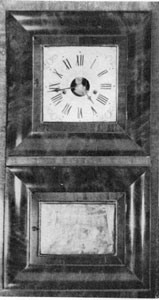 4. A Forestville clock with 1835-39 movement yet uniquely cased in an "OG on an OG" and bearing an exceptional label mentioning only two of the manufacturer's names.

THE FORESTVILLE CLOCK MANUFACTORY, J. C. BROWN, Proprietor, was the name used from 1850 to 1855. An advertisement (fig. 5) in the Connecticut Business Directory for 1851 is interesting:

“Forestville Clock Manufactory, J. C. Brown, Proprietor. 8 day and 30 hour marine clocks, 8 day and 30 hour OG’s, Top pillar carved, 8 day S top carved and plain, 8 day S top carved and plain, 8 day Jennie Linds, Prince Alberts, Victorias; — and pledges himself that all clocks manufactured at his establishment will give entire satisfaction both as regards quality and finish and at as low prices as can be or are sold by any other manufacturer of same description of clock.””

Incorporated in 1852, there was started a hardware manufacturing business with J. C. Brown as president, under the name of Forestville Hardware Co. This name he changed in 1853 to Forestville Hardware and Clock Co. The firm is believed to be separate from the Forestville Clock Manufactory. About this time the manufactory suffered a bad fire which interfered with operations for a time. Every clock factory seems to have had at least one severe fire in its history, yet with the accumulation of shavings from the planning mill in the making of cases, such fires appear possible enough.

Perhaps the financial panic of 1857, casting its shadow before it arrived, began to be felt as long as two years ahead in a sharp slackening of business. In any event, J. C. Brown and his companies failed in 1855. E. N. Welch took all of them over and began operations again. The Welch interests finally became, in 1902, the present Sessions Clock Co. Following his failure, J. C. Brown went on to various other enterprises but he had no more to do with the making of clocks. He was in Westborough, Massachusetts; Brooklyn and Nyack, N. Y. He died in Nyack in 1872 at the age of 63 and was buried in Greenwood Cemetery in Brooklyn.

From comparison of (and deduction about) clocks and their labels, those clocks which bear the Forestville and J. C. Brown labels can be approximately dated with the aid of additional information, as follows: 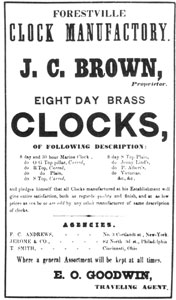 Rolled brass one day weight driven movements date from 1838 or later, mostly later. Etched glass tablets came into use after 1840. Coiled springs, first in the fusee cones of wood and later of metal, are believed to have been used after the middle of the 1840s.

The acorn is a famous Forestville clock. The shelf type acorn, of which there are a half-dozen known variations, could be about 100 years old or later. The wall-type acorn, which looks more like a lyre than an acorn, could date still later. Just how much J. C. Brown had to do with their design is not a matter of residual record. His name appears on almost if not all of them. Perhaps he should be given credit for this graceful clock so much prized by collectors.

It is interesting to note that the house which is pictured on some of the tablets of J. C. Brown clocks is a house he purchased in 1847, at the height of his clock-making success, from Lawson C. Ives. It is located on Maple Street in Bristol and is still standing.

That Forestville and J. C. Brown clocks were well designed and well built is attested by their fine timekeeping and the present excellent condition of their cases. Today they merrily beat out the right time as they work away through their second century.