This article describes the evolution of cosmetic cases for women – especially perfume bottles – in use from 3000 B.C. until the 18th century, noting their designs and materials. It originally appeared in the December 1942 issue of American Collector magazine, a publication which ran from 1933-1948 and served antique collectors and dealers.

The world over, at all times women have tried to be more beautiful than nature created them. They made their personality harmonize with their appearance by adding some special artistic note to the natural beauty.

In cosmetics, nothing of real importance has been invented in thousands of years. Our recipes of today are more scientific, less harmful to health than some older ones, but they are not new. Powder and creams, perfumes and ointment, mascara and dyes, go back to early civilization. In Mesopotamia, as early as 3000 B.C. there were make-up kits, fashioned of crudely carved alabaster stones with several compartments for different ointments. (See Illustration I.)

King Solomon got treasures from all over the world but liked “the smell of his wife’s ointments better than the most expensive spices.” Many of the old Egyptian cosmetic recipes are known from Papyrus manuscripts. “To cure baldness: fat of lion, fat of hippopotamus, fat of crocodile, fat of cat, fat of serpent, should be mixed together as ointment.”

Honey was used to soften the skin, oil to make the skin smooth in the hot drying sun. The Egyptians invented the hairpin to hold their richly plaited wigs in place. Their pots and bowls, bottles and containers, around 1500 B.C., most of them made from alabaster or wood, are very numerous. Rarer are silver bottles, such as the perfume bottle of Tatmes the Third. (See Illustration II).

To be up to date for the Roman Lady was, undoubtedly, the greatest cosmetic luxury of all times. Large parts of her time and huge sums of money, mostly that of the boyfriend, were spent at the beautician. Influenced by Greek styles, Roman ceramique cosmetic jars are often elegantly painted, while earlier ones were plain. Many glass perfume bottles of Roman times are still found in excavations. Only those of unusual shape and special, fine, iridescent color are valuable. 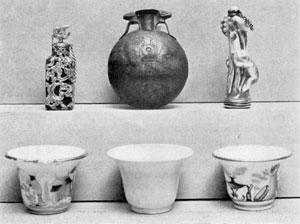 Perfume bottles of the Egyptian and Roman periods are open, as far as we know. Their perfumes were made with a heavy oil as base, and flowers, spices or gums compounded with it, and therefore did not evaporate.

In the time of the Persian Luristan culture, 1500 B.C., there were very interesting bronze perfume bottles. A complete one consists of bottle, bottle stopper and stopper’s stopper. The stopper itself is still hollow and more of decorative than of practical value. A final stopper really closes the bottle.

The Gothic Age, so romantic with “Minne” song and “Lady of my heart,” created the most wonderful jewelry boxes and cosmetic utensils.

Another highlight was the reign of Queen Elizabeth of England. This great lady was such an admirer of fine scents, that even her shoes were perfumed. Many toilet lotions, perfumes and articles were kept by the Ladies of Court and others of good standing, in beautifully decorated boxes known as “Sweet Copper.”

One of the most charming cosmetic inventions took place in the Elizabethan reign. The love for different fine scents created the Pomander. A little golden one is shaped and opens like a book, with eight compartments. More general is the shape of a delicately molded fruit, which unscrews at the top and falls apart in different slices, held together only at the bottom. Each slice opens from the inside and is filled with a different flavor.

To Charles II, “The Merry Monarch,” we owe the next cosmetic invention, the black beauty patch. It became customary for the Ladies of Nobility to add piquancy to their faces with black spots of most unusual designs, as little black stars, moons, ships, etc. 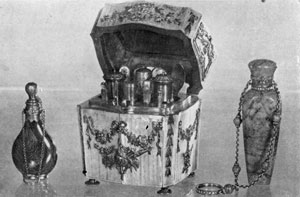 The patches later on became plain circular spots. They and the little patchboxes are found in nearly every country of Europe and also in America. These boxes must have been very popular, indeed, as their variety is most astonishing; from plain iron to diamond studded, gold ones; from simple ones in engraved silver to the delicately enamelled bird box.

It is interesting that the only American pieces, which are known to be more plentiful, are small, simple silver patchboxes. Probably the fashionable society of English and Frenchmen also imported their makeup utensils from their homeland. We don’t know of any china or silver perfume bottles, pomanders, mascara pots or the like, from the 17th or 18th Century (outside of glass perfume bottles) of definite American workmanship. Quite unique, made between 1825 and 1837, are the porcelain perfume bottles made by Tucker of Philadelphia.

One of the most curious types of patchboxes was used in Sweden. It is a combination of a vinaigrette with a small compartment for the patches underneath the base. The box often was set with colorful glass stones.

In 1709 Johann Friedrich Boettger invented china. The Meissen factory which he founded, and later the Vienna factory under Dupaquier, created a number of perfume bottles, which are treasured possessions of many lovers of early china. The artistic quality and the charming humor of the early Meissen pieces inspired many of the Chelsea Scent bottles. A quite spectacular one is the figure of a provender for a monastery carrying in the basket on his back provisions and a good-looking girl. 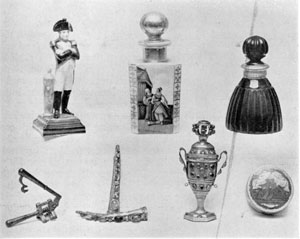 Romance inspired many other models, bearing mottos of gallant or sentimental nature. Cupid, sharpening his arrow, explains, “II entrera mieux” (it will enter better). Boys distilling a love potion or the Fountain of Love is shown on Chelsea scent bottles. Others are just beautiful birds (head removable), flowers or human figures. The earliest are nun and monk. Some of the later models, when Chinese taste was in vogue, represent a Chinese family in rich colors.

These scent bottles, by the way, were carried by the Ladies of the 18th Century in their coaches and were used on dusty journeys. Enclosed in shagreen cases, they preserved well.

Most enamelled perfume bottles are called “Battersa.” It is a curious fact that nearly the only enamelling factory, which made no scent bottles, was the famous “York House” factory of Stephan Theodore Gaussen in Battersea. An advertisement of their bankruptcy sale in 1756 gives a good account of their manufacturing line, but makes no mention of scent bottles. Most of these intricate pieces are thought to originate in Bilston; also Chelsea and Staffordshire were not only centers of pottery, but also of fine enamelled work.

The illustrated vanity case from the collection of the Metropolitan (see Illustration V) is an especially fine example of chinoiserie in enamel, closely influenced by Canton enamel of the 18th Century. The tools in those cases are masterworks of invention and cunning. It is often a riddle how so many articles could be fitted in so small a place. Needle and bodkin, spoon, fork and knife, perfume bottle, nail file, toothpick combined with earspoon, are in nearly all of them, sometimes even additional utensils for cosmetic, housework or drawing. 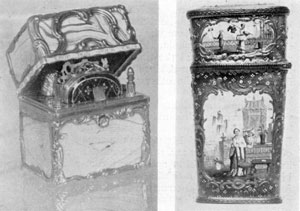 Also the later periods show richness and variety of cosmetic containers and utensils. Some of them we illustrate (see Illustration IV), but space will not allow us to deal extensively with them.

May we close with one of the oddest bills which was ever passed in the English Parliament in 1770:

“That all women of whatsoever age, rank, profession, or degree, whether virgins, maids or widows, who shall impose upon, seduce and betray into matrimony any of his Majesty’s subjects by the scents, paints, cosmetic washes, artificial teeth, false hair, Spanish wool, iron stays, hoops, high heeled shoes, bolstered hips, shall incur the penalty of the law against witchcraft and like misdemeanors and that the marriage, upon conviction, shall stand null and void.”