Miriam van Houten and Joop Muller run DXPO Playing Cards, a great information resource on antique and vintage playing cards, and a member of our Hall of Fame.

People are often surprised when we tell them we collect playing cards. They all know how to play games with cards and have all held them in their hands before, but they’ve never realized that ordinary playing cards come from a long history of ancient patterns, in Europe dating back as far as the 14th century. Local standard patterns appeared, disappeared or evolved over the centuries and different patterns, regional or by country, are still used within the European territory. 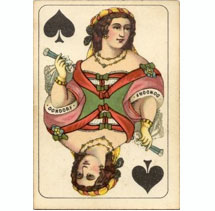 Besides standard patterns, normally used for everyday playing, special non- standard decks have been printed and published since the introduction of playing cards in Europe. At first special non-standard decks were made by artists, for the courts in Europe. By the 17th century special educational or practical decks, like geographical decks showing regional or global maps, were being made.

Sometimes non-standard decks were published to commemorate certain events or comment on them, sometimes for political or religious reasons and in the previous century often for publicity and advertising purposes too. They have become historical testimonies. Even now a 50 year old deck will give a nice impression of how things looked or were done in those days. Going back 100 years you’ll find the Art Nouveau influences in the non-standard designs of the courts, aces and backs.

Each decade or century shows its characteristics on its playing cards. Can you imagine what “pin-up” cards looked like in the Victorian age? See that Ace of hearts here! And when the process of photography was discovered, it didn’t take long before the first application was featured in playing cards too. Holding and studying playing cards up close will tell you things about the technique, their makers sometimes, and their topics. The more antique and vintage decks that are found the more we can tell about the history of playing cards and the “fashions” in their development.

How we got hooked on playing cards

But of course we didn’t realize all that when we first started collecting. It was one of our neighbours who was a collector of (not only) playing cards and showed us some of his collection. Miriam was amazed by the variety and designs and started to go to flea markets and collectors fairs to pick up unusual decks. Miriam couldn’t drive, so at first Joop came along as chauffeur and looked at everything but cards on the stalls, but it didn’t take long before he started participating in this card hunting.

So we had difficulty focusing in this wide field of collecting. We did single jokers for a while too, but decided that we would try to complete a collection of decks, made by the Dutch “Speelkaartenfabriek Nederland” (1909-1969), to be specific. Besides that we would still collect all kinds of non-standard decks too, with only one parameter: that we would both like the designs. And if we could find affordable antique decks, we wouldn’t leave them on the table either. Oh well, at least we tried to focus!

The result is that we now have a collection of some 4000 decks, which includes a wide variety of techniques, styles and topics and covers two centuries in time. And that gives us the opportunity to create expositions around certain topics, showing decks from all over the world. It also makes it possible to compare the patterns, styles, techniques and topics that have been used over the centuries, which sometimes gives unexpected insight into the development of playing cards.

The hunt, and the buzz!

Something that every collector will recognize is “the buzz” that a special find will give. Your heart rate will go up, causing a faint dizziness and warm feeling that may even result in wet palms or armpits. We still remember our first buzz. It was on a flea market, where we found a “Kroonkaart” deck (by the Speelkaartenfabriek Nederland) almost hidden among steel machinery parts.

Jack of Diamonds – Designed by Cassandre for Hermès, printed by Draeger, France, 1948.

We noticed it, grabbed it and quickly bought it, as the price was ridiculously low. We strolled away as casually as we could and then ran to our car to count the cards and enjoy the design, scenic aces and jokers. At that time it was our first find of a vintage deck, nowadays we don’t even consider this deck a very special find anymore. It will take a lot more to get a buzz nowadays, but still the pleasant excitement is there, when you see a big, old, wooden playing card box on a stall.

Opening it usually only brings disappointment, because the antique cards it should have held are gone or replaced by a modern standard patterned deck. But sometimes there’s a sudden buzz! And although the downside of a large collection is that the chance to find something new for your collection only decreases, that buzz will keep you card hunting again for several months.

Card hunting is a tough job! It often means getting up really early to go to a meeting, market or fair, as the competition doesn’t sleep either. Fortunately in the Netherlands there are only a few avid playing card collectors, who are willing to get up early. There’s even a sort of comradery among us. There’s no real envy, you’ll have coffee together and discuss the finds. On few occasions you even do a trade right then and there with another collector. And if you’ve been card hunting for years, the merchants will know you and set decks aside for you. Sometimes that makes card hunting much easier.

Playing cards on the Internet

9 of Clubs – Key to the Kingdom, a modern transformation deck, designed by Tony Meeuwissen, printed in China, 1992.

eBay and other auction sites make life easier too, but they have changed the nature of collecting drastically. We’ve been active on eBay since February 1998 and at first it was an eye opener: we saw decks from other continents, that we had never seen before. In the early days of eBay there were not that many collectors there, so bargains could be found. And then you would get your buzz by bidding in the last minute, staring at the screen and waiting in the dying seconds to see if you were the lucky one. This has changed over the years.

Nowadays if there’s a special deck on auction, it will never go at a bargain price anymore. So for the last 5 or 6 years we’ve frequented regional small markets, antique shops and garage sales again too. But there are two good things about eBay and other international auction sites too. First, in general prices of decks have decreased. On any given day, if you type in “playing cards” on eBay, you’ll find some 9000 decks on offer. The second good thing is that often serious item descriptions can be found, which provide usable information about the decks, their makers and dates. Without having to buy, you can expand your knowledge.

We have learned a lot about playing cards in the past 12 years and not only from eBay. We have attended international conventions, met collectors from all over the world and discussed amazing decks. These personal contacts are often good for extra information. We’ve joined several international and national playing card collectors clubs and their publications are a source of information too. And we’ve gathered a good number of books that have been published about playing cards. All these are necessary to determine maker, country and date of the decks you find. And there are decks you come across that have never been seen or described before. There will always be mysteries to solve!

We operate the DXPO website and have been together for more than 30 years now. For the last 25 years we have been living in Zaandijk, a small town in the western part of the Netherlands. Since 1998 we have maintained a website about this hobby. Each month there’s an update with new additions and expositions and we send a free report of this to the subscribers of our newsletter (in Dutch and English).

On our site you’ll also find special sections about jokers and playing card ephemera. The main purpose of the website is to show the visitors a large variety of decks from our collection, often related to certain topics such as “Art and Cards”, “Decks with a Fragrance”, “Yuletide on Iceland” and many others. By sharing our knowledge about playing cards, we hope that more people will become interested in this hobby.

We have also published two CD-r’s, that show their content as web-pages on your browser. The first presents the history of the Dutch “Speelkaartenfabriek Nederland” (1909-1969), showing all their non-standard and standard decks, special games, quartet decks and over a thousand different backs. Our second CD-r we show 150 decks from our Pin-Up & Erotica collection in full.

The Evolution, History, and Imagery of Playing Cards