In this article, collector Bruce Wayne Schank talks about collecting antique Ball jars (fruit jars), and the history of the Ball jar. Based in Pompton Plains, NJ, Bruce can be reached via his website, Balljars.net.

One of the most common fruit jars ever produced is the lowly Ball jar. Historical figures show that from between Sept 1, 1894 until Dec 31, 1961, 41,256,856 Gross jars were produced by the Ball Glass Mfg Co. A staggering number, what this suggests is that Ball jars should be a readily available commodity and very easy to find, making collecting Ball Jars a somewhat easier venture since more of these jars exist then probably any of the other manufacturers combined. Yet with all that glass out there to be found, it has become a colossal challenge to categorize, date and fully understand the minutia of variants produced by the Ball Glass Mfg Co. Plus, there is a sub-minutia of variances in the entire differing genre of Ball jars, to make matters even more convoluted. 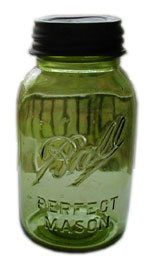 Now, who hasn’t at one time or another, whether at a garage sale, antique store, grandma’s basement or in some hole-in-the-wall come across a Ball jar, whether a PERFECT MASON, IDEAL, SURE SEAL, IMPROVED, SPECIAL or one of the myriad of other varieties of jars produced over the last century plus by the Ball Glass Mfg Co. Incredibly, though, many people have failed to recognize the true importance these jars played in our nation’s history. And believe me when I tell you, Ball jars are a quintessential part of American history and as much so as apple pie or ice cream.

Imagine this: the Ball jar was at one time reviled by the vast majority of the collecting world as worthless and a complete waste of time, money, and energy. Yet a small group of collectors just happened to see the beauty, value, and future in collecting Ball jar, so much so that yes, amazingly, despite all the odds and over many years, Ball jars have now blossomed into one of the most highly sought after collectibles among jar hobbiests today. 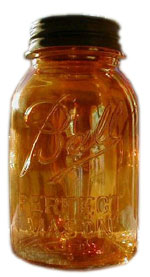 Why is this so? Why the drastic change? Well, coming from a 30-year perspective in the hobby, I can say simply a few things; 1) there are many more collectors now than ever before vying for the few good jars known to exist or being discovered. 2) Most of the highly sought after truly historical jars are out of reach financially for the vast majority of collectors. 3) Most of the few prized historical jars are already in someone else’s collection. 4) The few historical jars still left intact are not readily available for the average collector to even consider purchasing. 5) With the advent of eBay the playing field has leveled somewhat but the ultimate overall cost still is a huge factor for the average collector because overall, eBay is not a bargain.

On the other hand, as we have already previously established, Ball jars are a readily available commodity. Plus, the wonderful character of the glass, the beautiful breathtaking colors and hues, the varying closure types, the myriad embossing styles, and the re-worked and modified moulds make Ball jars a viable alternative to other much more expensive collectible jars. And yes, out of all those millions of jars produced, there are many one-of-a-kind Ball jars, rare as well as scarce, and worth considerable amounts of money. Yet I personally consider some of the $1 jars out there to be just as pleasing and desirable as the expensive ones. The passion that truly drives a Ball jar collector on is that around any corner is the possibility of a new discovery, a totally different and unknown variation, a possible piece of the puzzle solved, or a really crude masterpiece. 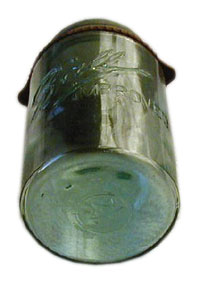 I truly consider myself a very fortunate and lucky person that I just happened to be one of those few collectors who recognized long ago the intrinsic value, beauty, and history of Ball jars when they were objects of disdain or simply overlooked by so many others. I’m so grateful I had the foresight to collect Ball jars because despite the fact many of the good ones in my early years were financially and geographically out of reach, I still managed to acquire a very small but desirable collection through knowledge, insight, persistence, patience, and hard work.

But, what I have truly gained over the years besides the wonderful jars in my collection is something far more intrinsically valuable, namely the many great people who befriended me, taught me, reasoned, bantered with me, traded with me, sold jars to me, and shared their lives. For that I am truly grateful. I can honestly say that collecting Ball jars has been one of the most satisfying adventures in my life and something I will never regret doing as long as I live. 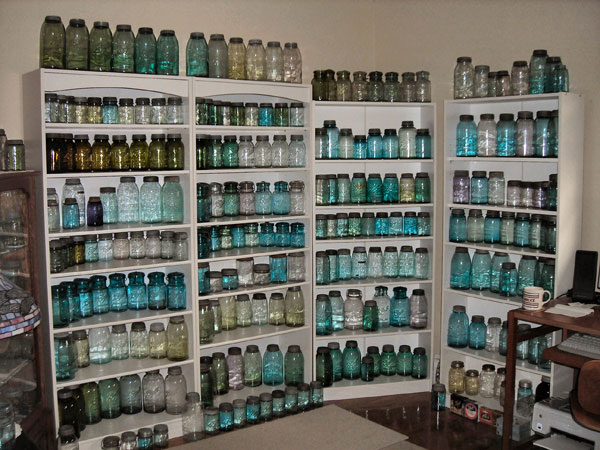 Ball Blue and the Hoosier Slide

Bill Lindsey on How To Read a BottleHow Snake Oil Got a Bad Rap (Hint: It Wasn't The Snakes' Fault)

Ball JarsThe roots of the Ball Glass Manufacturing Company go back to 1880, when Fra…