How Snake Oil Got a Bad Rap (Hint: It Wasn't The Snakes' Fault)

These days, “snake oil” is synonymous with quackery, the phoniest of phony medicines. A “snake oil salesman” promises you the world, takes your money, and is long gone by the time you realize the product in your hands is completely worthless. But get this: The original snake oil actually worked. Save this one for the next cocktail party; it will blow your friends’ minds. 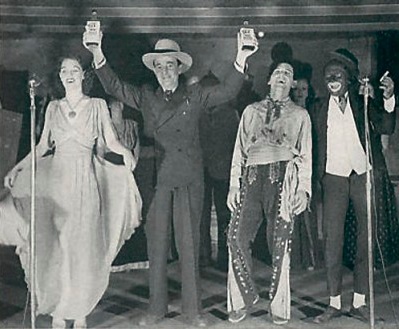 In the 1860s, Chinese laborers immigrated to the United States to work on the Transcontinental Railroad. At night, they would rub their sore, tired muscles with ointment made from Chinese water snake (Enhydris chinensis), an ancient Chinese remedy they shared with their American co-workers.

A 2007 story in Scientific American explains that California neurophysiology researcher Richard Kunin made the connection between Chinese water snakes and omega-3 fatty acids in the 1980s. 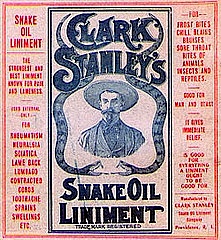 “Kunin visited San Francisco’s Chinatown to buy such snake oil and analyze it. According to his 1989 analysis published in the Western Journal of Medicine, Chinese water-snake oil contains 20 percent eicosapentaenoic acid (EPA), one of the two types of omega-3 fatty acids most readily used by our bodies. Salmon, one of the most popular food sources of omega-3s, contains a maximum of 18 percent EPA, lower than that of snake oil.”

However, it wasn’t until several years after Kunin’s research that American scientists discovered that omega-3s are vital for human metabolism. Not only do they sooth inflammation in muscles and joints, but also, they can help “cognitive function and reduce blood pressure, cholesterol, and even depression.”

So why does snake oil have such a bad rap?

Well, hucksters that sold patent or proprietary medicine caught wind of the miraculous muscle-soothing powers of snake oil. Naturally, they decided to sell their own versions of snake oil—but it was just much easier to forgo using actual snakes. 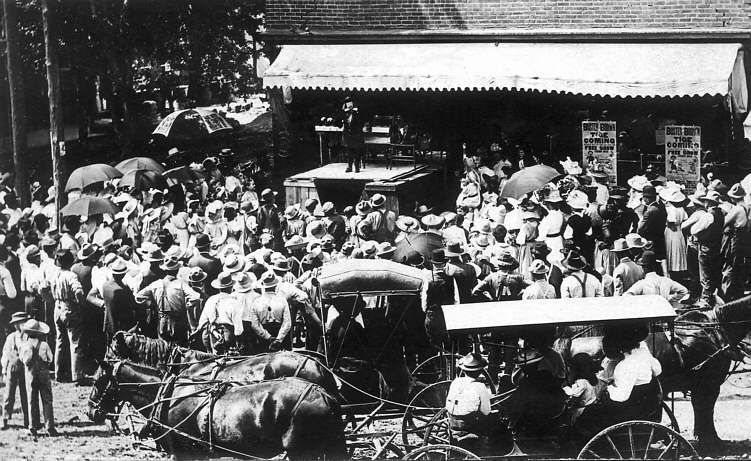 In the dry and dusty 19th century Wild West, Chinese water snakes were hard to come by. Already, to give their remedies credibility, these companies—in particular, the Kickapoo Indian Medicine Company—claimed that their recipes came from Native American healers.

In the last dozen years or so, omega-3 supplements, oils, and creams have made a comeback in big way.

As it turns out the Choctaws and other tribes did use rattlesnake grease to alleviate pain from rheumatoid arthritis—even though, according to Kunin’s research, earth-dwelling rattlesnakes have far less omega-3s (8.5 percent EPA) than oily water-dwelling snakes. So the charlatans claimed to make their cure-all out of the most fearsome snake most Americans ever encountered: the rattlesnake.

Even better, the rattlesnake could be used to heighten the danger and excitement during their pitches. To sell people on their products, these companies toured the West with elaborate carnival-like “medicine shows” often featuring live music, puppetry, acrobatics, blackface performers, and sideshow acts. The medicine show always culminated with a dramatic demonstration of the remedy “healing” audience members, usually “shills” placed in the crowd by the company.

Rattlesnake wranglers became hugely popular gimmicks, as they would appear to slaughter a hisser in front of a crowd and then pretend to extract the oil from its body to make a liniment that could cure everything from measles to typhoid fever. 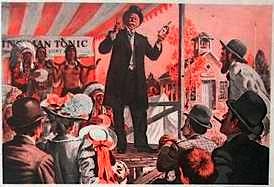 The most famous of these was a cowboy named Clark Stanley, also known as The Rattlesnake King, who said he got his Snake Oil Liniment formula from a Moki Pueblo tribesman. Wearing colorful Western garb, he’d captivate crowds, like the one at the 1893 World’s Columbian Exposition in Chicago, as he battled rattlers before their eyes.

Stanley’s Snake Oil Liniment had many imitators, including Miller’s Antiseptic Oil and Lincoln Oil. Eventually people became wary of these “snake oil salesmen” and so the hucksters started putting their names and pictures on their bottle labels as a guarantee of their products.

A bottle of rattlesnake oil.

Still, the tide was turning against patent medicine at the turn of the century, as more and more American doctors began to subscribe to the Germ Theory of Disease posed by Robert Koch and Louis Pasteur. Then in 1905, Collier’s magazine published a scathing article indicting patent medicine pushers as fraudsters who sold often poisonous products. The public outrage led to the Pure Food and Drug Act of 1907.

A shipment of Clark Stanley’s Snake Oil Liniment was seized by the U.S. government in 1917 and studied by scientists. Their research revealed that it contained mineral oil, red pepper (which warms the skin), traces of turpentine or camphor (for a medicine smell), and just 1 percent of fatty oil, likely from cattle. But it contained not one ounce of snake oil—rattlesnake, water snake, or otherwise. 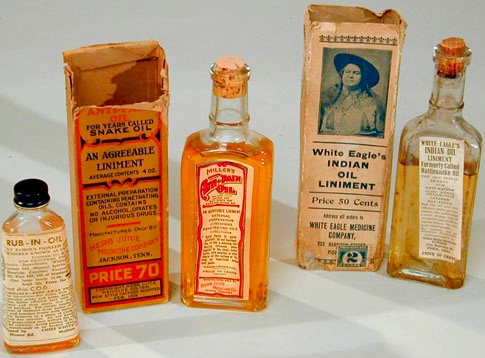 It wasn’t long before other “snake oils” started putting their true ingredients on the label like Old Fashioned Snake Oil, produced by C.F. Sams of Durham, N.C., which contained mustard oil, pine oil, petroleum oil, paprika, camphor gum, and oil of wintergreen. Others, like Miller’s, marked their bottles with phrases like “known as snake oil” or “for years called snake oil but does not contain snake oil.”

That marked the beginning of the end for medicine-show hucksters. But was it the end for snake oil? Not entirely. True Chinese water snake oil has always been available in most urban Chinatowns. But in the last dozen years or so, omega-3 supplements, oils, and creams (often made from fish) have made a comeback in big way, available not only at health food stores, but also at your most respectable corner pharmacy. How do you like that?

How Collecting Opium Antiques Turned Me Into an Opium Addict 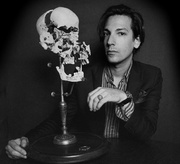