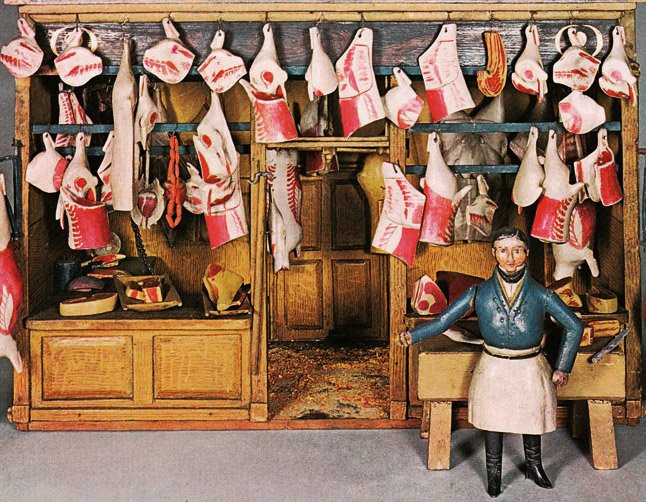 PETA would never approve: This grisly 1840 doll-sized butcher shop with miniature animal carcasses and a floor covered in sawdust and blood would be shockingly graphic to our modern sensibilities. After all, here in the 21st century, we like to remain cheerfully oblivious about where our meat products come from.

But in Victorian times, such detailed model butcher shops were not uncommon, says Sarah Louise Wood, a curator at the Museum of Childhood at the Victoria and Albert Museum in London. The real question is: Why exactly do such things exist?

“It’s a form of escapism into a perfect world.”

One answer can be found in Robert Culff’s 1969 book The World of Toys, which suggests that such playsets—like the ones produced by famous turn-of-the-century toymaker Christian Hacker—did well with Victorian children who weren’t at all squeamish about imagining themselves cleaving a calf’s flank. 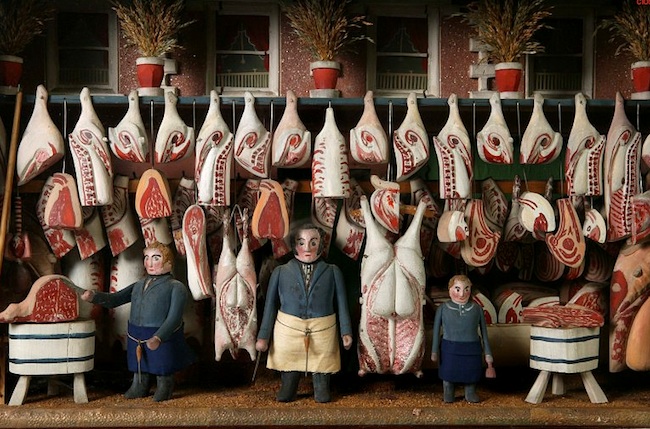 Top: An 1840 model butcher shop, pictured in “The World of Toys,” even depicts the blood and sawdust on the floor. Above: The Victoria and Albert Museum has a similar model, circa 1850-’60.

Culff writes that these “exact representations of butchers’ shops” were very popular, “with their modeled joints, strings of sausages, and whole animal carcasses hanging from real iron hooks, tier by tier, ’round the wooden butcher and his two assistants in their striped aprons.” He explains that it must have been satisfying “taking down and wrapping Sunday joints for one’s brothers and sisters, and presumably a certain amount about the prime cuts of meat was learned painlessly in the doing of it.”

But Wood believes that most of the elaborate early 1800s butcher-shop replicas were not intended for children at all. As much as a meter wide, they were more likely created for advertising displays and placed in the real butcher’s window, to let passersby know exactly what the proprietor had inside. 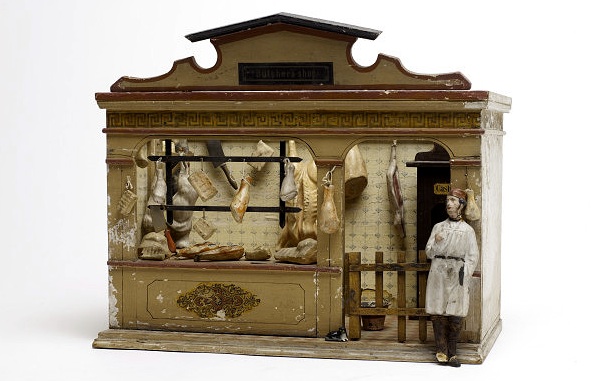 This 1900 model butcher shop, featuring wild boar, however, was made by esteemed German toymaker Christian Hacker and definitely intended for children. From the Victoria and Albert Museum collection.

However, as doll houses—which also started out as toys for adults—were being manufactured for children around the late 19th century, so were small-scale places of commerce, such as the butcher’s. These toy shops allowed kids to mimic adults and learn about money and food, just as supermarket playsets do today. The toy animal flesh, Wood says, wouldn’t have been shocking, because this is how meat was presented and bought and, with limited methods of refrigeration, children would have been used to seeing preserved cuts of meat hanging up.

What we do know is that Victorians documented their entire world in miniature. According to Culff, elaborate and accurate little replicas were modeled for every store in town: the draper, the greengrocer, the fishmonger, the baker, the milliner’s full of bonnets and hat boxes, and the sweet shop featuring “uncertainly balanced scales, jars of hundreds-and-thousands [a.k.a. sprinkles] and cachou lozenges in little tins smelling of ghostly roses and violets.” When you consider this teeny-tiny world it can blow your mind: Can you even imagine sprinkles smaller than sprinkles? 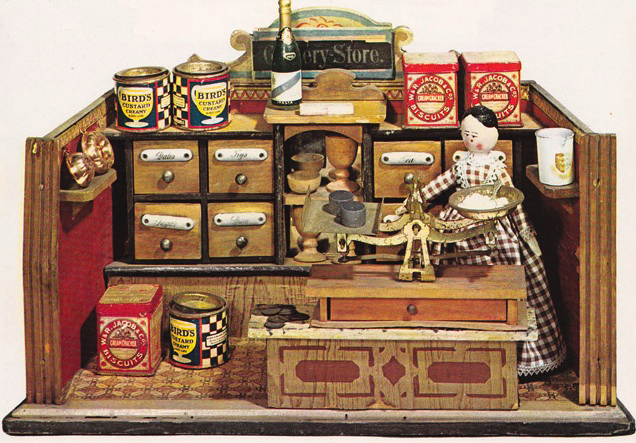 An example of a late 19th-century model grocery store with name-brand products. From “The World of Toys.”

The impulse to miniaturize the world is why we have doll houses in the first place. As it turns out, the earliest doll houses, borne out of “cabinets of curiosity” or “wunderkammers” during the Renaissance, had nothing to do with child’s play, either. At first, wealthy elite collectors would fill their cabinet shelves with miniatures of household finery, and then, the shelves became diminutive models of rooms, thus giving birth to the idea of the “baby house.”

That name means “small house,” but it’s also related to dolls: Starting in the 15th century, beautifully crafted dolls in England were referred to as “babies,” even though they represented full-grown women. The “babies” always wore the finest clothing, made of velvet, silk, and gold lace, patterned on the garments of the aristocratic little girls who loved them. 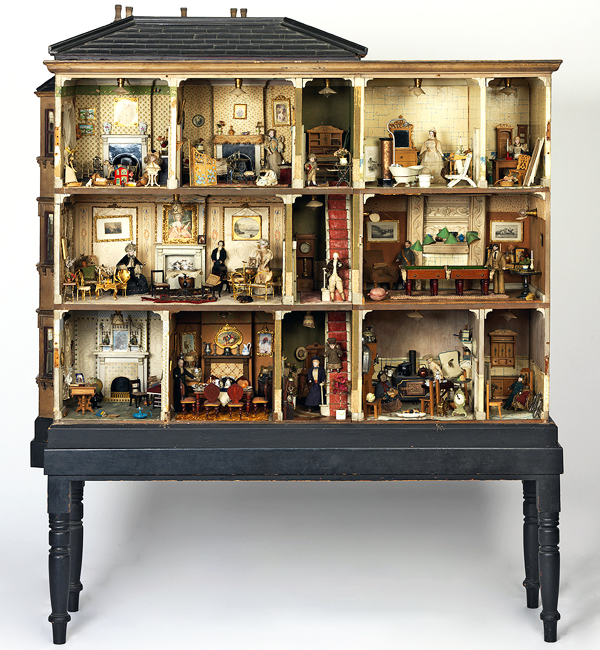 Miss Miles’ House from 1890 is the only posh Victorian doll house in the Victoria and Albert Museum collection that belonged to an actual child.

Even though girls did have dolls, luxurious baby houses were more often than not the playthings of high-society adults. Duke Albrecht V of Bavaria commissioned the first baby house on record from artisans in Nuremberg, Germany. When it arrived in 1558, he decided it was far too extravagant to be a toy for his daughter.

And no wonder. Owners spared no expense outfitting their baby houses with smaller versions of the most ornate furnishings and elegant accoutrements. Master craftsmen were tasked with making pocket-sized silver, glass, and ivory pieces, and upholstered exotic-wood furniture with working drawers and hinged doors. Accurate petite wool rugs and bedspreads would be woven. Shimmering chandeliers hung from the ceilings, and bronze molds and pans hung in the kitchens. 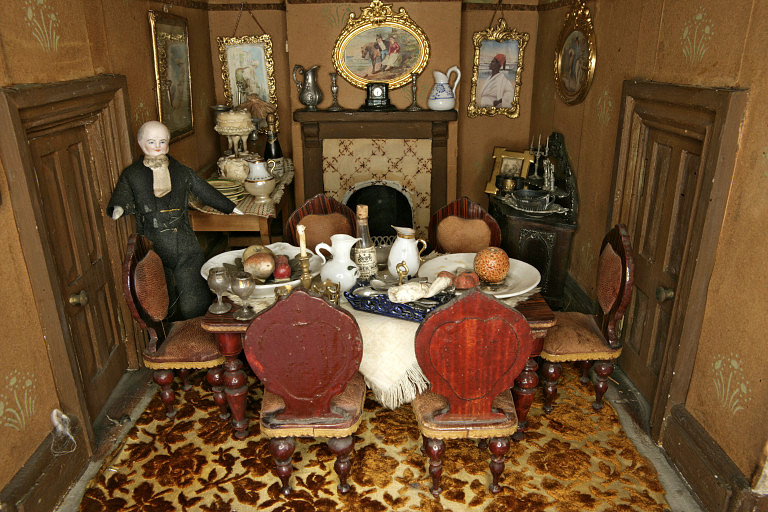 A close-up of the dining room from Amy Miles’ House, shown in full above. From the Victoria and Albert Museum collections.

“It was an expression of wealth,” Wood says. “All of those pieces would have been valuable and showy.“

In the 18th century, top European potteries such as Limoges, Minton, Wedgwood, and Royal Doulton, made doll-house versions of their fine china. British cabinet maker Thomas Chippendale is even believed to have crafted the scaled-down furniture for the 1740 doll house at Nostell Priory. Naturally, if a child were allowed to touch such things, she would be heavily supervised. Wood says that the baby houses might have had a role in teaching children and servants how to inventory household belongings like silver and linens. 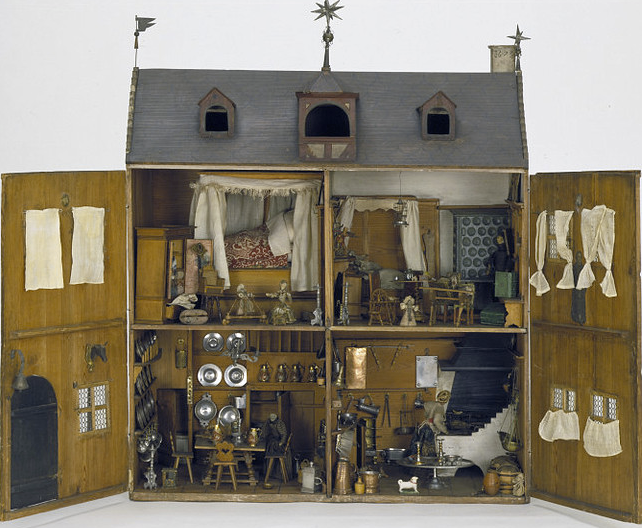 The unicorn head right of the door in the 1673 Nuremberg doll house indicates the home belonged to an apothecary. From the Victoria and Albert Museum collection.

Before the Enlightenment, children were mostly regarded as imperfect miniature adults themselves, and they were expected to grow up fast—and start working, studying, or preparing for marriage as soon as possible. Even in the 1800s when the concept of “childhood” was first embraced, many parents considered too much play risky and imprudent. Thus, Victorian children’s books, games, and toys often incorporated moral or religious teaching.

And doll houses were largely the domains of full-grown ladies, well into the Victorian period. In fact, Wood say that of all the Victorian doll houses in the V&A Museum of Childhood collection, only one called Miss Amy Miles’ House, belonged to an actual child. Adult women would delight in picking out wallpaper and furnishings for their doll houses, as friends and family would present them pieces as gifts. 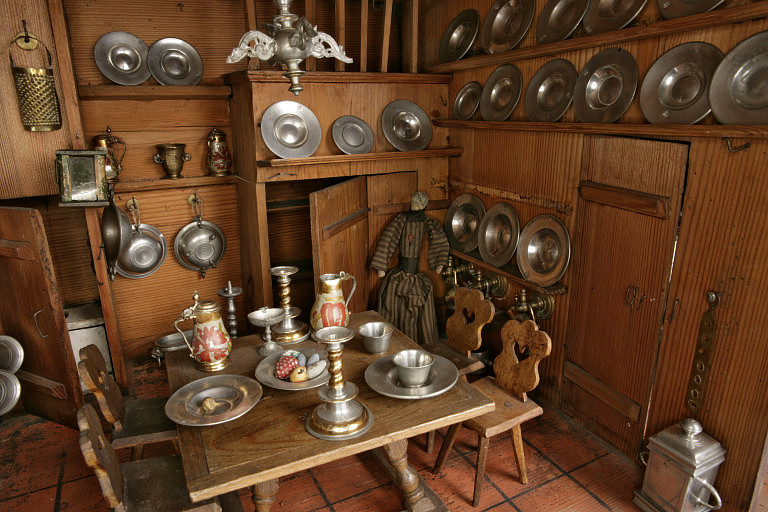 Fine silver, tiny beer steins, and wood furniture in the Nuremberg doll house, pictured in full above. From Victoria and Albert Museum collection.

“Doll-house collectors try to re-create things from their childhoods, or from their imagination, or from history,” Wood says. “It’s a form of escapism into a perfect world where you can control exactly how your house or your shop is set up. It’s almost a feeling of psychological control and retreat that’s less about toys. But children may harness the same thing in imaginative play, too.”

The same showy Victorian houses may have also been used as instructional toys to teach little girls on how to decorate and maintain an elegant home, although Wood says their specific educational role—versus their decorative one—has varied over time. “But for the most part, doll houses have certainly provided an educative ‘play value’ for adults and children alike.”

It wasn’t until the late 1800s that smaller, less elaborate doll houses were mass-produced exclusively as fun toys for kids by the likes of Hacker, Gottschalk, G&L Lines, and McLoughlin Brothers. And for the first time, commoners, and not just most moneyed members of society, could afford to own them. 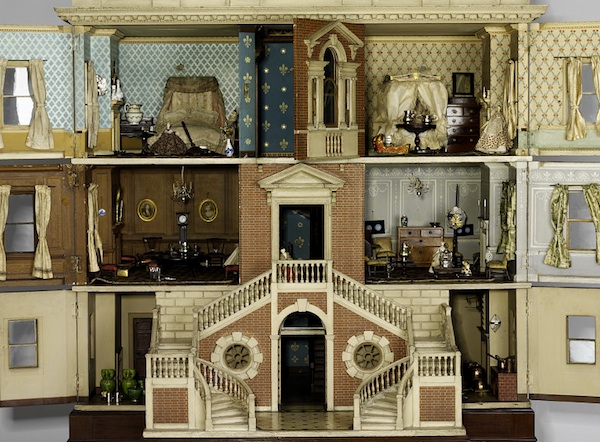 The woman who owned the Tate Baby House from 1760 adorned it with the most exquisite decor possible. From the Victoria and Albert Museum collection.

The same companies came out with toy merchant shops, such as the butcher’s, and their corresponding peddler dolls, as toys with an educational slant: to teach little girls how to shop for desirable cuts of beef, lamb, and wild boar. It wasn’t long before these toy stores, like the grocer’s outfitted with tiny tills and weighing scales, were stocked with little cans of Heinz Baked Beans and Fry’s Cocoa, an early example of branding.

As gross as those butcher shops might seem to us now, I remember as a child coveting my best friend’s 1982 Barbie McDonald’s playset, with its beeping cash registers, bitsy serving trays, and fingernail-sized paper hamburger boxes. In 1987, Fisher-Price, too, came out with a far less intricate Little People McDonald’s. 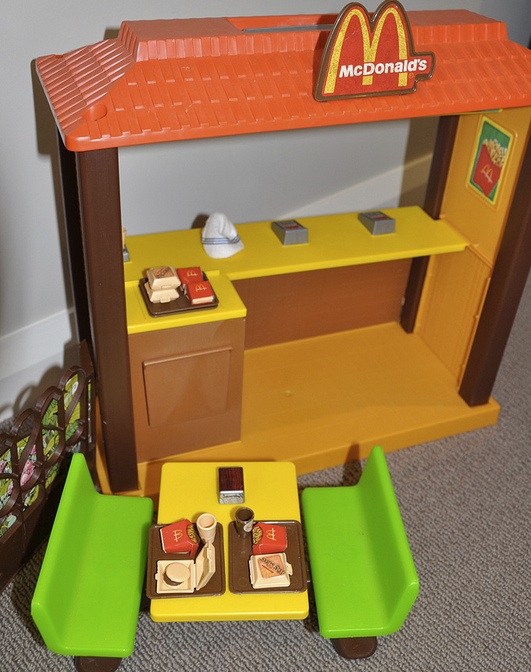 It’s the same cow, ground up and served in little boxes: A 1982 Barbie McDonald’s playset.

In the 19th century, kids were taught how to purchase select cuts from fresh cow carcasses. A hundred years later, they were encouraged to consume overly processed ground beef and trans-fatty French fries from a fast-food behemoth. Which is worse, really?

(Learn more about the history of doll houses and miniatures at the Victoria and Albert Museum of Childhood.)

From Little Fanny to Fluffy Ruffles: The Scrappy History of Paper Dolls

The Reclusive, Doll-Collecting Copper Queen of Fifth AvenueMurder and Mayhem in Miniature: The Lurid Side of Staffordshire Figurines 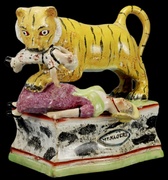