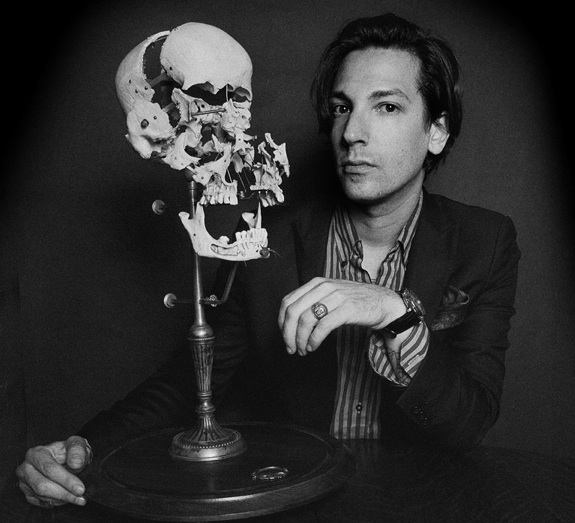 Halloween is the time of year when people reveal their most ghoulish fears and fantasies, decorating their houses with fake mummies, plastic skulls and skeletons, and eerie contorted faces carved into apples and pumpkins. But for a certain breed of collector, like artist Ryan Matthew Cohn (pictured above, in a photo by Sergio Royzen), this sort of decor is just not creepy enough. Such collectors would rather deck their apartments with specimen jars, real mummified heads, musical instruments made out of human bones, Victorian hair art, and actual skeletons—human or otherwise. We recently took a look inside Cohn’s Brooklyn apartment, in an article on decorating with taxidermy. 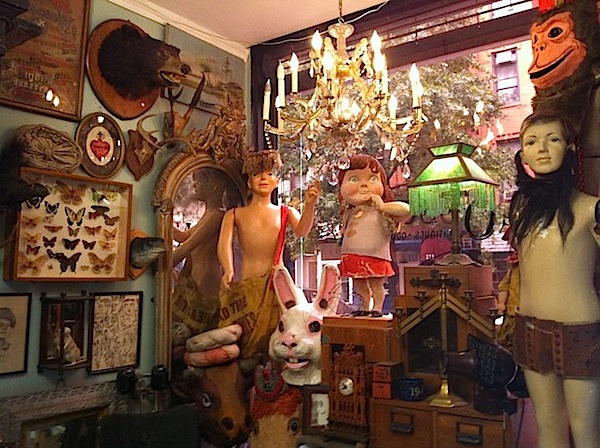 Perhaps the most famous store dealing in these bizarre collectibles is Obscura Antiques and Oddities in New York City (pictured above), run by Mike Zohn and Evan Michelson. Their store has risen to fame thanks to the “Oddities” reality TV show, which has aired on the Discovery and Science channels. Other shops specializing in the same sort of Victorian “cabinet of curiosities” antiques include Loved to Death in San Francisco and the Necromance stores in L.A.

On the show, Cohn—a buyer for Obscura who maintains a bone-filled Tumblr blog—goes on his idea of a dream date, taking a beautiful woman to admire some flesh-eating beetles. Cohn’s friend, artist Ian Mehr, uses the beetles to eat the meat clean off goat skulls, so he can employ them in fantastically gorgeous Tim Burton-esque chandeliers.

Cohn, also a co-owner of the New York City clothing store, Against Nature, says he grew up wandering the woods in upstate New York, where he and his dog would often stumble across dead animals. Being a curious teen, he was morbidly fascinated with the corpses and would bring them home to study and incorporate into art projects. He became particularly fascinated with bones and how to tell when one is misshapen or deformed.

Thus, Cohn became an expert in “articulating” human and animal skeletons. Customers will come into Obscura with boxes or bags of skull bones, and ask him to put them together again.

“One of the things I do in my art is a reiteration of what was done in the Victorian era, what’s referred to as exploded Beauchene skulls,” Cohn says, who explains they were named after 19th century French anatomist Claude Beauchene.

“Those early skull models that were collected by world travelers and used at schools were based on Beauchene’s work. For my own artwork, I am always looking for pathological skulls that might have had a disease or something that makes them different from any other skull that I’ve seen.”

Often, Cohn’s clients want to memorialize beloved pets. Instead of having those pets taxidermied, owners will have Cohn put their skeletons together, often in a pose of the animal’s favorite activity, whether it’s Fluffy the cat sleeping by the fire or Fido the dog leaping for a ball.

“What I’m doing is I’m trying to help respect these pets,” he says. “I find it a little bit more pleasing to the eye to look at a skeleton as opposed to a taxidermied animal.”

Taxidermy and skeleton articulation were popular in the Victorian era. People in the 19th century obsessed over the scientific study of anatomy, thanks to Charles Darwin and natural-history museum dioramas, as well as death and mourning, thanks to Queen Victoria’s endless grieving of her beloved Prince Albert. People would keep reminders of mortality, like Victorian death photos, known as “memento mori.”

Necromance in L.A. is one of the West Coast’s answers to Obscura. Prosthetic limbs are among their offerings. Via www.necromance.com

Naturally, Cohn is a big fan of the Mütter Museum in Philadelphia, which houses a huge collection of specimens with curious deformities and antique medical devices. In the spirit of the Mütter, Cohn recently purchased a rather freaky two-bodied pig in a specimen jar and a “beyond rare” elongated human skull—his personal holy grail.

“What I love about this business is you wake up at 1 in the morning to get somewhere by 3 so that you can be there before everyone else,” he says. “You don’t know if you’re going to find anything. You’re just going there with the hopes of finding the holy grail of antiques that you’ve always been looking for.

When Cohn walked into Obscura 12 years ago, he knew he’d found kindred spirits in Zohn and Michelson, who are also drawn to the macabre and bizarre side of Victorian antiques. He found he was spending all his money in the shop, so he started selling them pieces he’d unearthed. 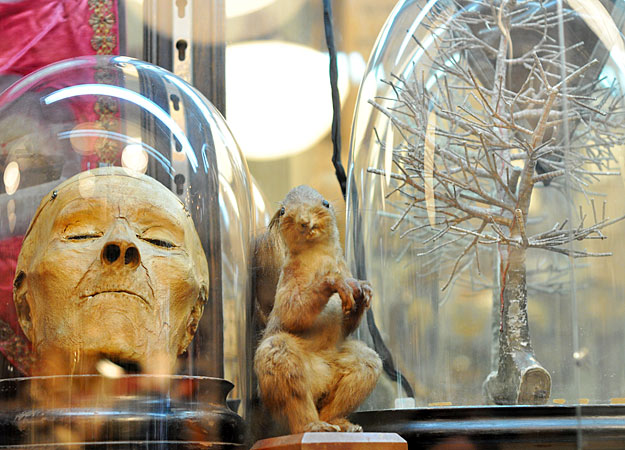 In Obscura, you might find a real mummified human head among the taxidermy and bell jars. Via the Discovery Channel.

“I coincidentally walked in one day, and have spent every one of my dollars in there ever since,” Cohn says. “Basically, I was wowed by the things that they had, a lot of freaky, real stuff. They’ve had two-headed taxidermy. They’ve had museum relics like elongated mummy heads. They’ve had a lot of skeletons, skulls, and they have these interesting, old display cases. It’s just stuff that you will not find at your average antiques store in the South. Mike and Evan have always had the best eye that I’ve ever seen besides my own, for just peculiar, off-the-wall pieces that you don’t see around.” 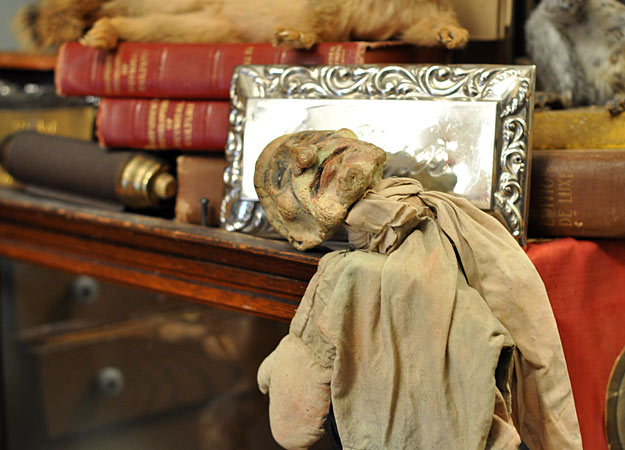 This Punch puppet looks eerily decrepit among the books and other antiques offered at Obscura. Via the Discovery Channel.

On the show, they’ve featured Tibetan trumpets made out of human femurs, a book bound with human skin, a World War I blood transfusion kit, a Fiji Mermaid (a mummified monkey sewn to a taxidermied fish tail), a desk lamp made from a baboon’s paw, a spooky Edison talking doll, and a Houdini-owned throwing knife.

“This is not normal. This guy’s reading a newspaper, and I have a two-headed cat.”

Naturally, you see on “Oddities” the sort of people you’d expect for such transactions—artists who work with their own bodily fluids, circus sideshow performers, black metal band members—as well as edgy celebrities like actress Chloe Sevigny and Jonathan Davis of the rock band Korn. Collectors Weekly guest blogger Steve Erenberg, of Industrial Anatomy, even makes an appearance, sharing his expertise on Victorian era firefighter smoke masks, the ones that remind him so much of “Star Wars.” 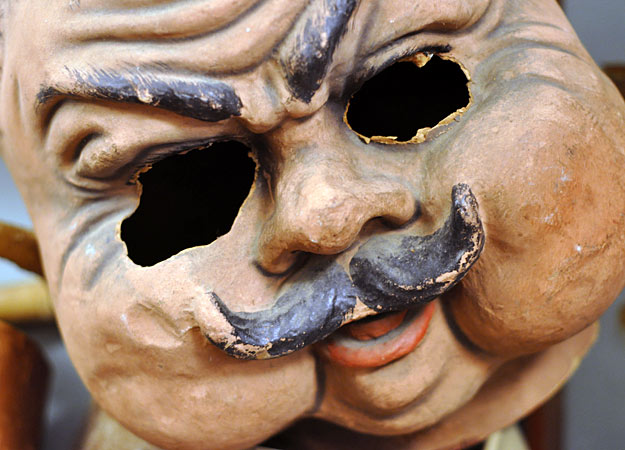 Want a creepy Halloween mask? Oddities collectors like the Obscura owners will never let you down. Via the Discovery Channel.

Of course, when it comes to trading in human parts, like skeletons, there’s always a concern about exactly where the body came from. Cohn and the Obscura staff will only accept skulls and skeletons that come to them via legal means, such as those that were used for medical research. Still, it doesn’t mean they don’t find themselves in hysterical situations, like when Cohn decided to investigate a Craigslist ad in upstate New York that read, “Victorian human skeleton found in Masonic Temple, belonged to my grandfather, comes with coffin.” 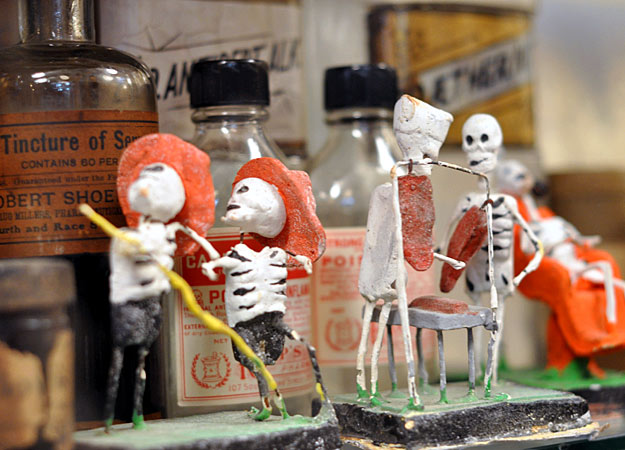 These calaveras (Spanish for “skull”) figurines are used in Mexican celebrations of Dia de los Muertos, also known as All Souls Day, also the origin of Halloween. At Obscura, they are posed in front of poison and medicine bottles. Via the Discovery Channel.

“The ad had every element of cool that I could think of, but no pictures,” Cohn says. “But it happened to be very close to where I grew up, so I just said, ’Screw it, if it doesn’t work out, I’ll at least get to go say hi to my mom.’ But sure enough, we find this old, creepy house off a side street, and this lady had it sitting right on her porch: a Victorian human skeleton in its coffin, with Oddfellows symbols all over it. It was clearly a medical one with nice brass hardware. 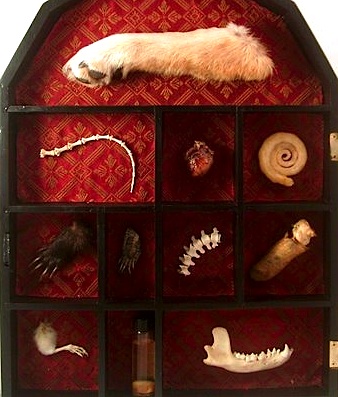 A cabinet of curiosities by the Loved to Death store in San Francisco. It includes a taxidermied coyote leg, an opossum articulated tail bone, a raccoon heart, a coiled rat tail, a skunk paw, a turtle foot, a partial skunk vertabrae, a pot bellied pig toe, a baby chick foot, a snake embryo wet specimen, and a partial fox mandible. Via lovedtodeath.blogspot.com.

“I bought it, and I didn’t think anything of it,” he continues. “But then realized that I had to take the bus home.

“I had to take the whole thing apart and put it into a duffel bag and then sit with it on a bus. I was looking around me and getting these weird thoughts in my head that everybody knows what’s in the bag.”

Cohn says he’s found himself in these situations more than once over the years, particularly because he lives in Brooklyn and doesn’t have a car.

Taxidermy Comes Alive! On the Web, the Silver Screen, and in Your Living Room

Dying To Go Retro? This Modern-Day Morticia Gives Death A MakeoverHayden Peters Talks About Skulls, Hairwork, and the Fashion of Mourning

TaxidermyTaxidermy evolved out of the tanning trade, whose practitioners preserved t…