This article focuses on the hand motif, discussing how the positioning of the hand and fingers can represent different meanings and providing some examples. It originally appeared in the November 1945 issue of American Collector magazine, a publication which ran from 1933-1948 and served antiques collectors and dealers.

The human hand has been used for centuries as a decorative motif. We find it made of china, ivory, glass, precious metals, coral; in fact, from nearly every material that can be carved or molded. 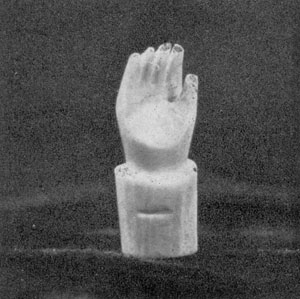 A Chinese Back Scratcher: Made in the form of an ivory hand with fingers up and slightly curved.

Collectors will find an amazing variety of uses and designs in articles featuring hands, and it is interesting to note that in some cases the positions of the fingers have a special significance.

While the hand design was used many years before the Victorian era, it was during that time that it seems to have been most popular in America. Parian vases, showing a hand supporting a flower cup, trinket boxes having covers decorated with beautifully modeled hands, paper weights and powder jars, all similarly adorned, were imported in large numbers from England.

A study of the works of noted sculptors and painters show that the hand has been used, not alone as a decorative feature, but as a means of portraying character, physical weaknesses and strength. 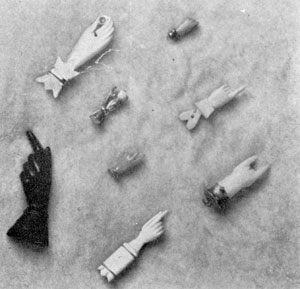 The Lincoln statue at Chicago by Augustus Saint-Gaudens, showing the great Emancipator with his strong bony left hand gripping the lapel of his coat, denotes a man of action and force, as clearly as do his rugged features.

A bas relief by the same sculptor of Robert Louis Stevenson, his slender hand with its long thin fingers holding a paper, denotes as emphatically his frailty. It is truly the hand of a poet and a dreamer.

A close study of The Last Supper, probably the most outstanding work of Leonardo da Vinci, illustrates very clearly that all emotions can be expressed with gestures and postures of the hands. The Master, seated in the center, head inclined, one hand outstretched with palm upward, clearly indicates, “Not My Will, but Thine, be done.” The other hand, palm down and averted, clearly says, “If it be possible, let this cup pass from Me.” 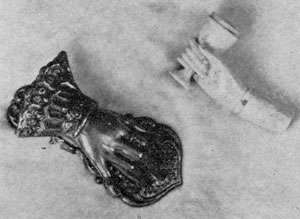 Judas is shown making an involuntary nervous movement which plainly asks, “What does this mean?” Philip, with his hands upon his breast, indicates clearly his innocence. And so, through the picture, one can read quite readily the minds and intentions of the disciples grouped around the table. “It is by the motion of the hands that Leonardo principally enlivens this picture and expresses what he thinks almost as well as by words,” says a well-known critic.

From a noted Italian cameo carver I learned that the carvers in his country stress the importance of the position of the fingers. When the hand is tightly closed with fingers doubled, like the very small coral hand in the group, it means “I like you very much.” A hand with the first and last fingers outstretched, like the porcelain hand in the lower right corner, offers protection from the evil eye. When only the first finger is extended, like the small wooden hand in the center of this row, it is a warning to keep away. 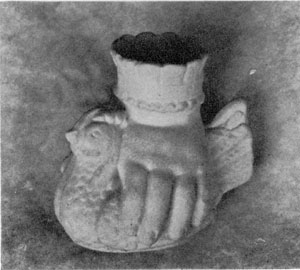 A Child's Vase of Parian: An unusual design. Here the hand holds a chicken with wrist forming vase. Hand supporting a flower cup is oftener found.

The two white hands are made of pearl and the upper one, which is a brooch, holds a garnet between the thumb and the forefinger. The small gold hand just below has a round turquoise in its palm. Below that is a tiny coral one which has a small gold bracelet set with turquoise at the wrist.

The ivory hand, with fingers up, does not show very clearly the little curves at tips of the fingers. This is of Chinese origin and was intended for a back scratcher. The tips are sharp and rather rough.

The pipe, which is made of bone, is very old and quite discolored. The details of this hand are clearly defined. The lower hand is an old brass paper clip.

I believe that jewelry and trinkets using the hand motifs are as popular today as they were seventy-five years ago. The pins are worn on lapels, and the smaller hands are used as charms on bangle bracelets and neck chains.