Today is Neil Young‘s birthday. He’s 65, but for many years now he’s been rock’s most youthful elder statesmen. 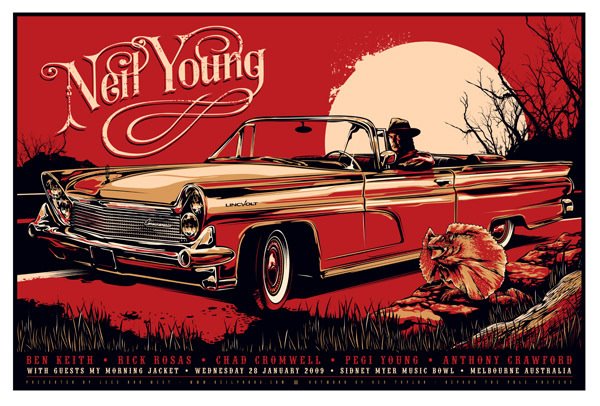 Ticking off the list of Young’s accomplishments would probably take about 65 years, but here are a few of  them. He’s an accomplished, and loyal, guitarist, still playing the Taylor 855 12-string guitars he purchased three decades ago. Equally loyal is guitar maker Bob Taylor, whose office wall features only one photo of one guitarist—Neil Young. Young is also a model railroad buff, who at one time owned a piece of Lionel and helped design the controls and sound systems for the trains. He’s a filmmaker, directing such movies as “Greendale” under his alias Bernard Shakey. He’s an advocate of both classic cars and alternative fuels, championing the conversion of his 1959 Lincoln Continental into the “Micro-Turbine powered Bio-Electro-Cruiser” LincVolt (seen above in a rock poster for a Neil Young concert in 2009). And he’s a giver, performing every year with Willie Nelson, John Mellencamp, and Dave Matthews at Farm Aid, and with an amazing array of artists at the Bridge School Benefit (performers over the past 25 years have included the Who, Paul McCartney, Bruce Springsteen, Elton John, and Pearl Jam). Happy birthday, Neil!