Iron Man and other Marvels at Special eBay Comics Auction

When “Iron Man 2” opens this weekend in Australia and the U.K. (its U.S. release is May 7), fans of the first film will likely get a healthy dose of Robert Downey, Jr.’s trademark self-deprecating irony, which is hardly a stretch for the actor and suits the character of Tony Stark to a tee. Special-effects aficionados will be similarly prepared for the new generation of getups and gizmos that Stark has devised for himself, but here’s a little tidbit that even the most avid “Iron Man” fan might not know. 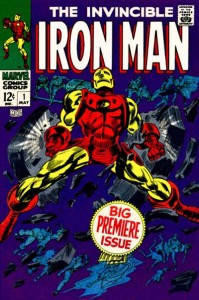 Remember the repulsor beam that shot out of the palm of Iron Man’s hand? Funny story about that particular piece of hardware: A friend of mine worked on the first “Iron Man” film. When the light in Iron Man’s palm lit up, it was because my pal was off camera with a remote control pushing a button. Oh, and it gets even more high tech: During the shoot, each morning and at lunch, he’d change the batteries in the RT (for “repulsor technology”) unit, just to make sure the thing performed on cue when the cameras were rolling.

A special auction from April 30 through May 9 at eBay takes fans even deeper behind the scenes with a rare chance to bid on the artwork and comics that gave “Iron Man” his start. Up for grabs are some 50 items, from Marvel action figures to a prop replica of the famous arc reactor (the compact device over Stark’s heart that keeps a piece of shrapnel, caught during the Vietnam War, from wending its way to the billionaire-industrialist’s most vulnerable organ).

The centerpieces of the auction, though, are the original Iron Man drawings by Don Heck and John Romita, Jr., as well as dozens of comic books, including “Iron Man #1,” “Amazing Fantasy #15” (in which “The Amazing Spider-Man” made his debut), and “Iron Man vs. Whiplash #1” from 2010, which would be unremarkable were it not for the signature on the cover by Mickey Rourke, who will play Iron Man’s nemesis in the upcoming film. Bidding starts at 99 cents for items valued under $1,000 or $99.99 for items valued at $1,000 or more. For more information, visit http://stores.ebay.com/comicsauction.