Return to 'The Crypt': Jack Davis Resurrects the Crypt-Keeper 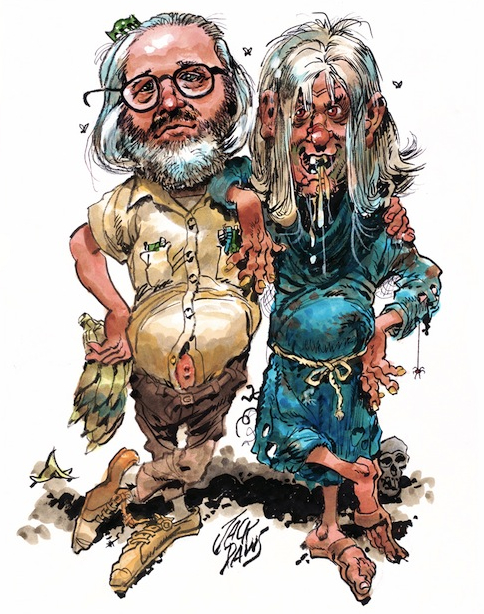 When iconic “Mad Magazine” illustrator Jack Davis launched his career in the early 1950s, he made a name for himself drawing nightmarish images for EC Comics titles such as “Tales From the Crypt.” Horror fans today still marvel at his towering and intricately detailed fiends—corrupt men with shadowy, crevassed faces; feral werewolves with saliva dripping from their fangs; hordes of slimy skeletal corpses that seem to reach out at you; and, of course, all those dismembered body parts strewn about the pages.

“The comics were pretty gruesome. The U.S. Senate had an investigation, which they probably should have had.”

But ask Davis today how he felt when he was creating these ghastly cartoons, and he reveals a side of himself that may disappoint hardcore gore groupies. “Oh, I didn’t particularly care for it,” the 88-year-old artist says. “My wife didn’t agree with it; she didn’t like the horror bit at all. But I had to do it, so I did it. I got paid for it, and the editors liked it. Evidently, it had a lot of fans.”

A lot of fans, indeed. “Tales From the Crypt” and other EC horror titles, all of which folded in 1955 due to public outrage, have had a lasting impact on the horror genre. The comic not only inspired the late 1980s HBO show of the same name, it also influenced the look of countless movies and television shows, including “Buffy the Vampire Slayer” and “A Nightmare on Elm Street.” 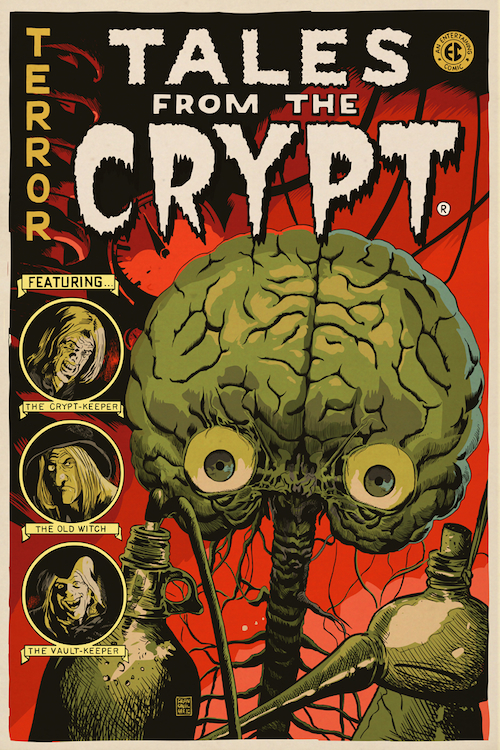 Top: Even though he’s retired, Jack Davis drew this image for Mondo of EC editor Bill Gaines holding a favorite treat, plantains, with his arm around the Crypt-Keeper. Above: Italian comic-book artist Francesco Francavilla pays tribute to “Tales From the Crypt.” (Images courtesy of Mondo.)

Now, Mondo Gallery in Austin is hosting an art exhibition, running October 25 through November 23, 2013, featuring work that pays tribute to “Tales From the Crypt,” both the comics and the TV show. Among the pieces in the show is a new illustration by Jack Davis of his former boss, EC Comics publisher and editor Bill Gaines, posing with the infamous Crypt-Keeper.

“Even though I wasn’t around when it was originally published, the HBO ‘Tales From the Crypt’ was an amazing intro into a demented world of darkly comedic horror stories and vivid artwork,” says Mondo CEO Justin Ishmael. “EC Comics’ editor Bill Gaines is one of my heroes, and it’s so incredibly exciting to combine his creations with thirty something artists that are also fans of that era.”

It was Bill Gaines who gave Davis—recently honored in a 2011 Fantagraphics retrospective book called Jack Davis: Drawing American Pop Culture—his first break. The young artist, who’d been drawing since kindergarten, had published comic strips in middle school and high school, in the Navy, and at the University of Georgia. When he graduated in 1950, he hoped to land his dream job working on the newspaper funny pages so he could afford to marry his college sweetheart, Dena Roquemore. 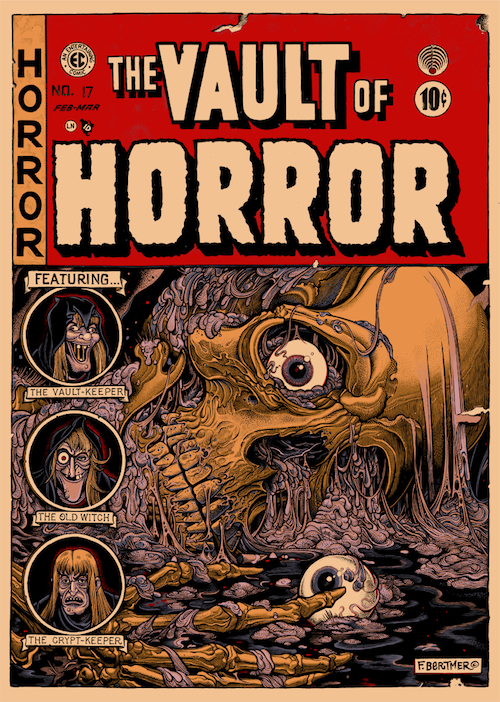 Florian Bertmer, a modern-day German illustrator from the hardcore punk and metal scene, gives his take on “The Vault of Horror” in a piece featured in Mondo’s art show. (Courtesy of Mondo)

“I wanted to be a cartoonist and get syndicated,” says Davis, who worked as an assistant to Ed Dodd, creator of the syndicated “Mark Trail” comic strip, while he was in college. “I figured I had to go to New York City because that was where everything in publishing was, including the comics syndicates. I took a year at the Art Students League in New York, and I’d look for work. I’d go up and down Madison Avenue, where I was rejected at the syndicates and at a lot of the publishers.”

“My wife didn’t agree with it; she didn’t like the horror bit at all.”

But not all of them. “I saw a comic book one day and went down to the offices of Entertaining Comics, where I met the publisher, Bill Gaines. My work was bad, and they liked it,” he says, laughing. “They gave me some stuff to work on right away, and I was very excited about that.”

Soon, Davis, who was sick of being a starving artist, developed a reputation for speed, as an artist who could sketch and ink sometimes three pages in a day. “I’d have to be fast, because when you turned them in, that’s when you’d get your money,” Davis says. “The faster you drew, the faster the money came in.” 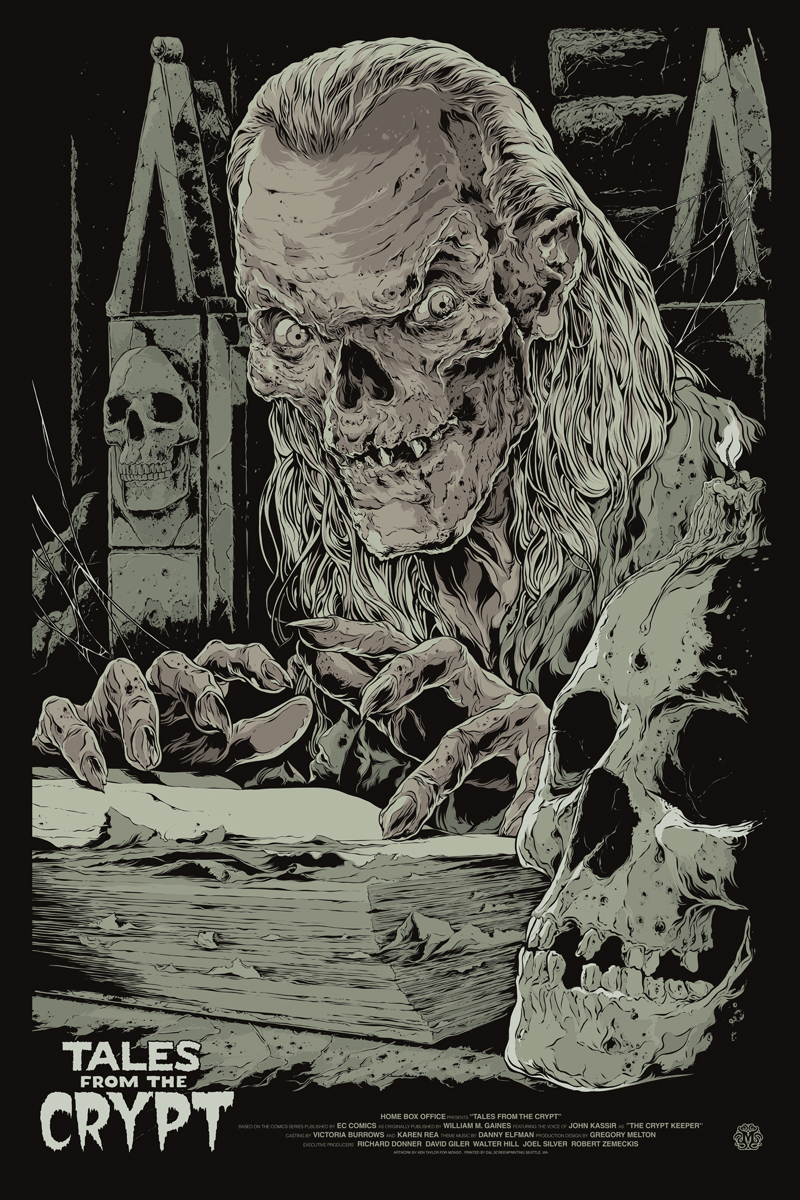 Australian rock poster artist Ken Taylor designed this Mondo poster for the “Tales From the Crypt” TV series, which ran from June 1989 to July 1996 on HBO. In the TV show, the Crypt-Keeper was an animated corpse, as opposed to the living Ghoul-Lunatic from the comic. (Courtesy of Mondo)

According to Davis, Gaines was a generous boss, taking his artists and writers such as Al Feldstein, Harvey Kurtzman, and Sergio Aragonés on trips to places like Japan, Mexico, and Russia, to have adventures and enjoy good food. “At first, I was afraid of Bill Gaines, but then I began to like him,” Davis recalls. “He was a great publisher, and he was very giving. He took us on trips we wouldn’t have been able to afford. I was very blessed and lucky to be in his stable.”

While Davis didn’t relish drawing hideous and frightful images, he was a fan of spooky tales. “I loved Frankenstein and the old horror movies,” he says. “I’d always loved ghost stories, too. When I was growing up, they had a show on the radio called ‘Lights Out.’ We used to have a gang of kids who’d get together to listen to it at night. It was great; it’d frighten you, and it probably influenced me.”

At EC Comics, Davis was assigned the Crypt-Keeper, one of three “Ghoul-Lunatic” hosts in the EC horror comics line. The Crypt-Keeper headlined “Tales From the Crypt” while his rivals, the Vault-Keeper and the Old Witch, had top billing in the “The Vault of Horror” and “The Haunt of Fear” titles respectively. However, all three narrated stories in each of the three bimonthly comics, which were virtually indistinguishable except for their names. 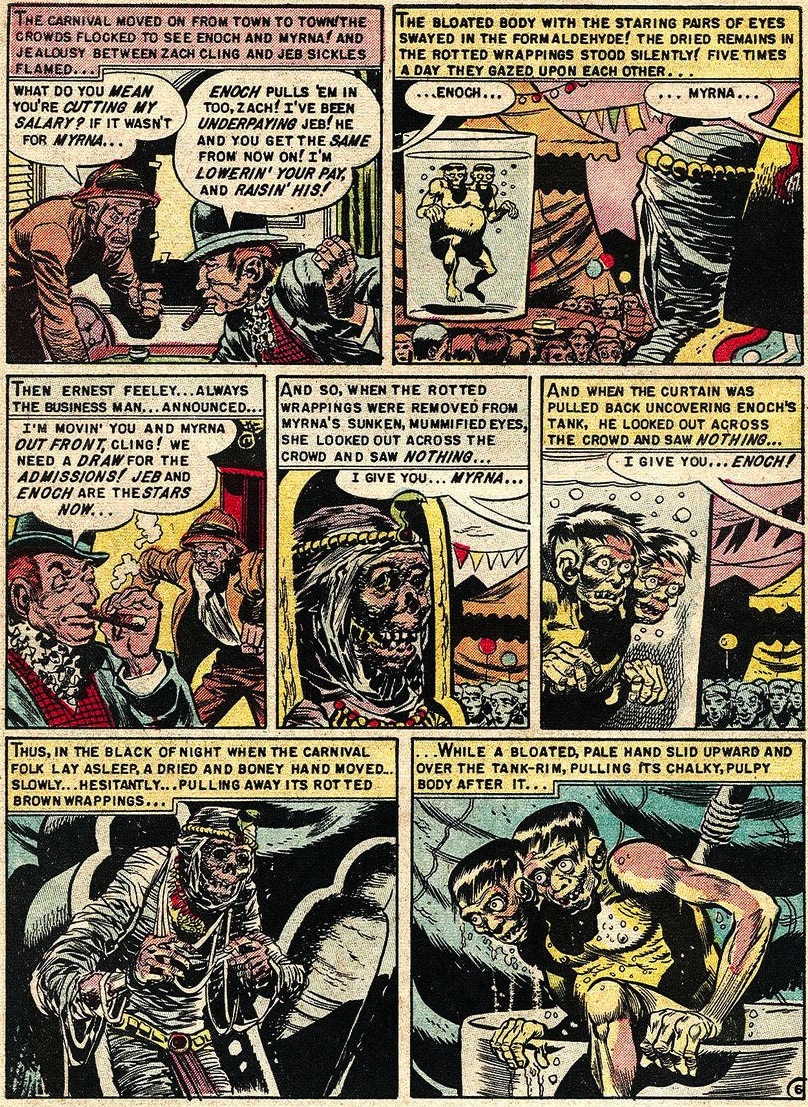 The Jack Davis-drawn story “Lower Berth!”, appearing in the December 1952-January 1953 issue of “Tale From the Crypt,” explains the origins of the Crypt-Keeper, who came about after two sideshow corpses fell in love. (Via HairyGreenEyeball.blogspot.com)

The Crypt-Keeper, a living, long-haired humanoid fiend, told “The Crypt of Terror” stories, which were illustrated by Davis and were featured in all three comic titles. Davis made his Ghoul-Lunatic more scabrous and decrepit than EC editor Al Feldstein’s original, a shadowy figure whose stringy locks covered his face. Starting in 1952 with issue #29, Davis drew all of the covers for “Tales From the Crypt” until the comic book met its end in 1955 with issue #46.

“Tales From the Crypt’ was an amazing intro into a demented world of darkly comedic horror stories.”

The stories in these comics are often morality tales, relying on tropes as old as time, in which people doing evil meet some horrendous end. Others were simple eye-for-eye type revenge stories, and still others were as silly as they were gross (a rotting mummy and a preserved two-headed corpse fall in love, for example). Some of them were attributed to contemporary author Ray Bradbury, and others were clearly influenced by macabre Victorian writers like Edgar Allan Poe, H.P. Lovecraft, and W.W. Jacobs. And then there were the “Tales” that were simply the wild inventions of EC editors like Feldstein, who gave Davis stories to draw.

When psychologist Frederic Wertham published his comic-damning book “The Seduction of the Innocent” in 1954, he pointed to “Foul Play!”, a Jack Davis-drawn story from the May-June 1953 issue of “The Haunt of Fear,” as an example of a comic that perverted children’s minds. In it, a star baseball player uses his shoe spikes to poison the opposing team’s best hitter. When the opposing team realizes what has happened, they plot a grisly revenge, shown in graphic detail. 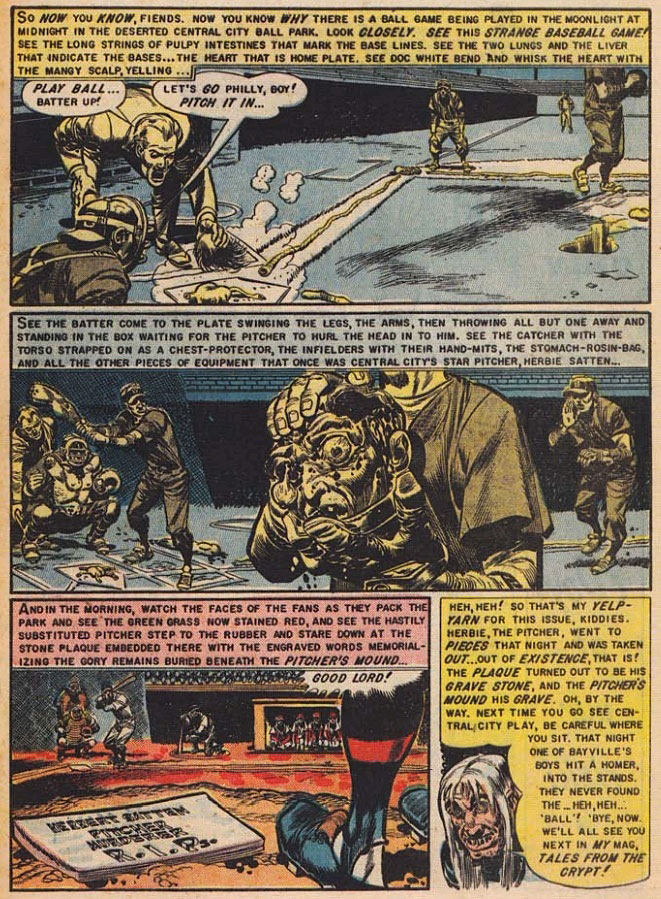 The final panels of “Foul Play!”, a ghoulish Jack Davis-drawn revenge story from “The Haunt of Fear,” which was cited in Frederic Werthem’s “The Seduction of the Innocent” as a tale that could corrupt young minds. (Via BestHorrorComics.com)

Thanks to Wertham’s book, which claimed that comics encouraged juvenile delinquency, concerned parents, teachers, and ministers put pressure on politicians to intervene, leading to the Senate Subcommittee on Juvenile Delinquency in April and June of 1954. This hand-slapping by the U.S. government prompted publishers to form the Comics Code Authority, which banned words like “horror” and “terror” from titles, as well as monster characters like zombies and werewolves. That spelled the end for the horror comics of the era and their explicit imagery. Feeling that EC was being targeted specifically, Gaines published his last horror comic dated for February-March 1955.

“The comics were pretty bad, pretty gruesome,” Davis admits. “The Senate had an investigation, which they probably should have had. But when ‘Tales of the Crypt’ ended, I was very disappointed, because I needed the work.”

Fortunately, Davis already had his foot in the door at new satire publication called “Mad,” started by EC writer and cartoonist Harvey Kurtzman. The first issue of “Mad” in 1952 began with a Davis story called, “Hoohah!” a humorous spoof on all the cliched horror tropes he routinely depicted for EC Comics. 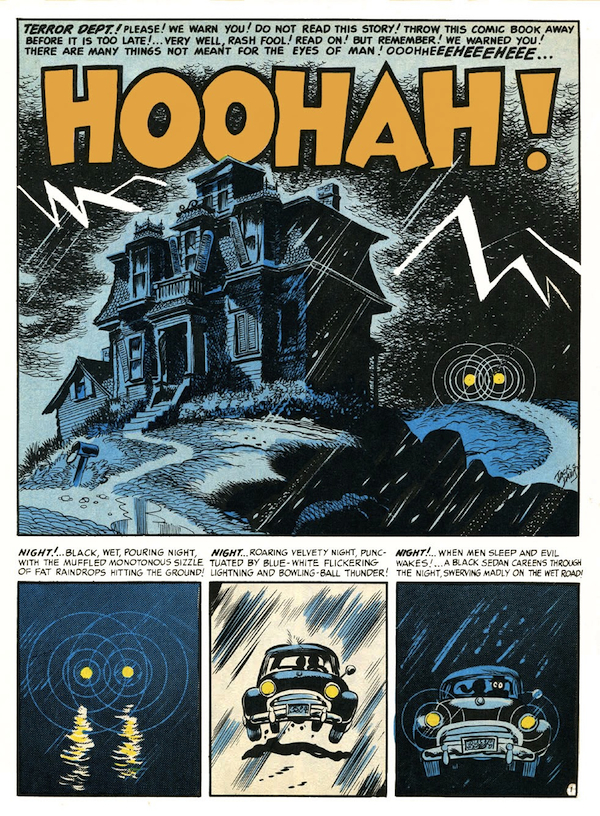 For the first issue of “Mad,” for October–November 1952, started with “Hoohah!”, a lighthearted spoof by Jack Davis mocking the horror genre, which was his bread-and-butter. (Via Francois-Corteggiani.com)

“I hoped that ‘Mad’ would catch on, and it did.” says Davis, who had two young children when the magazine launched. “A lot of parents probably didn’t like ‘Mad.’ The stories were satire, and sometimes they were good, but sometimes they were kind of bad. I don’t particularly like the way it’s going now,” he adds. “It’s stuff I don’t cotton with. I’m pretty conservative now. I love the guys that are down there, they’re good people, but I just don’t work for ‘Mad’ anymore.”

“Mad,” in fact, was a wild success, and of all EC’s horror artists, despite being singled out by Wertham, Davis came out the most unscathed by the Comics Code. His expressive faces and big-headed caricatures served comedy well at “Mad,” “Panic,” and later at EC competitor “Cracked.” Thanks to his talent and speed, he also found work doing advertising art for the likes of Parker Brothers, Pepsi, Procter & Gamble, Purina, and the U.S. Postal Service. In the 1960s and ’70s, he contributed 22 covers for “TV Guide,” 36 covers for “Time” magazine, and well-known publicity posters for movies like “It’s a Mad, Mad, Mad, Mad World,” and Woody Allen’s “Bananas.” Jack Davis was the go-to cartoonist of the 1970s.

But Davis is humble about his influence. “I love to draw cartoons, that’s all,” he says. “And I had a good rep who got me good work. But I’m retired now.” 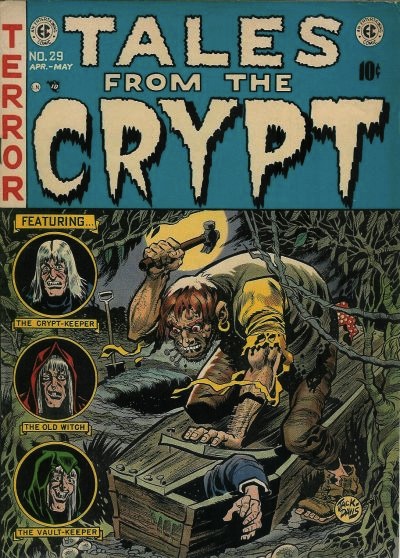 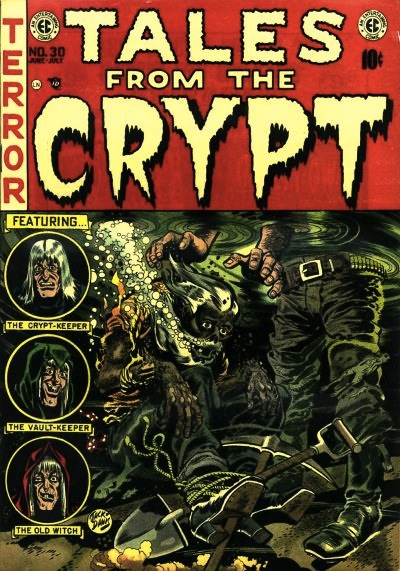 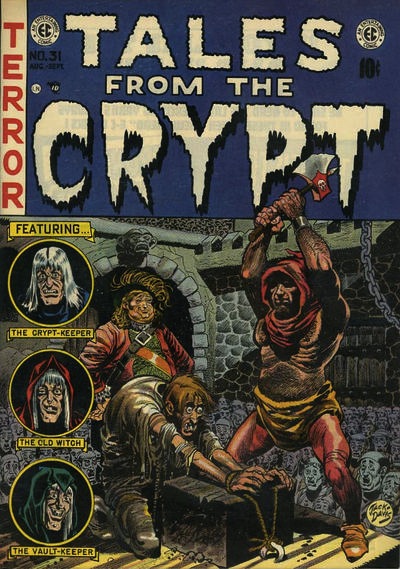 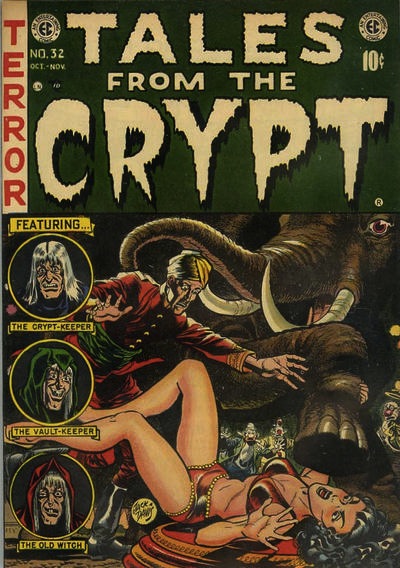 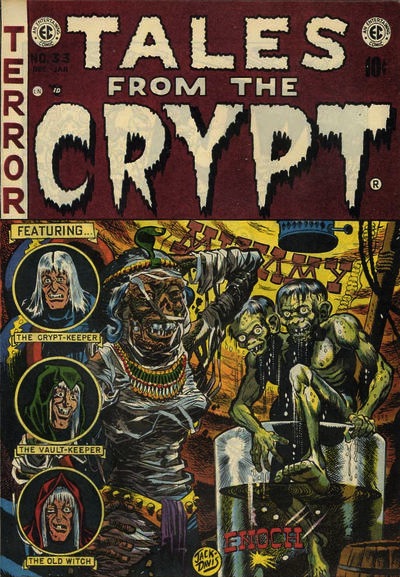 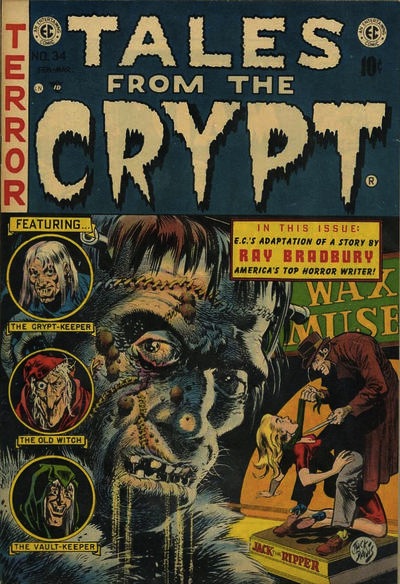 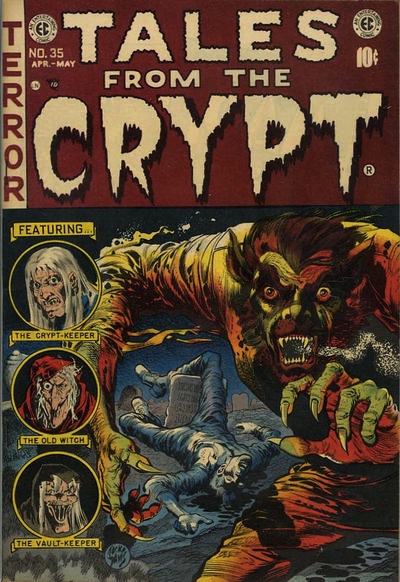 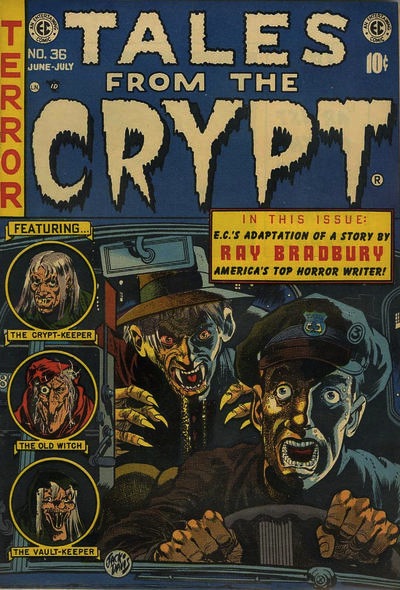 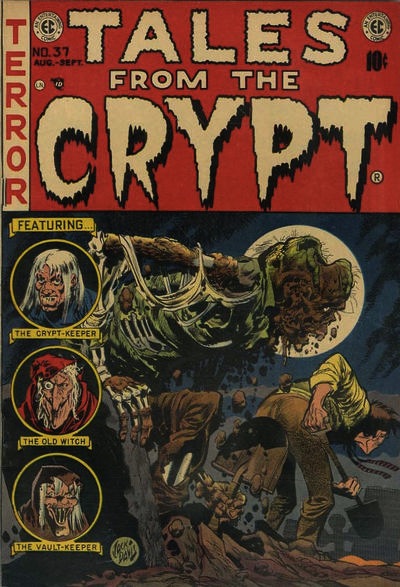 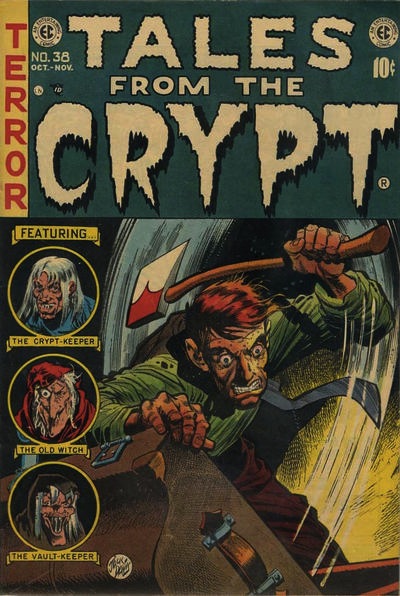 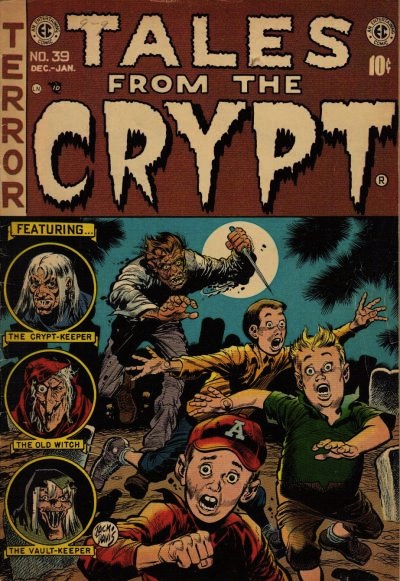 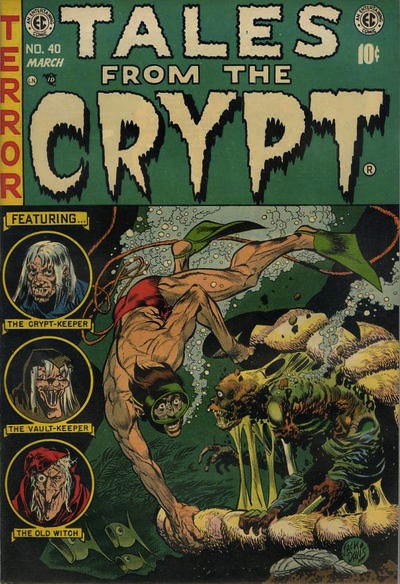 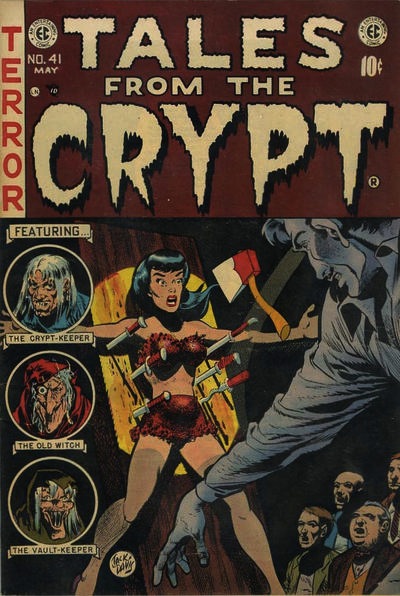 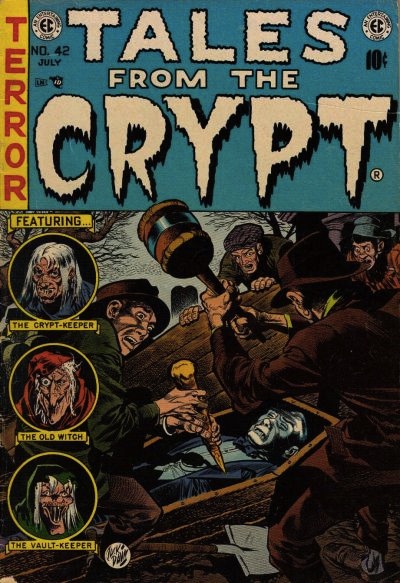 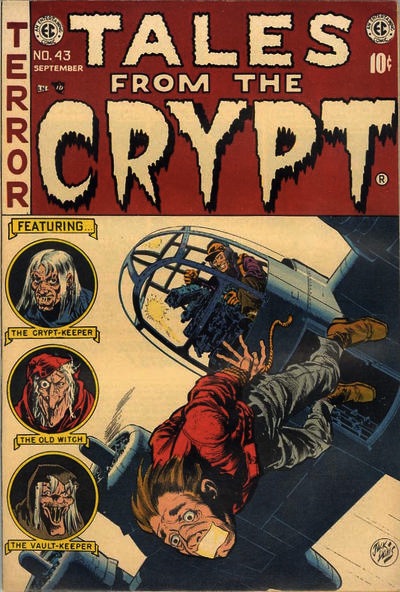 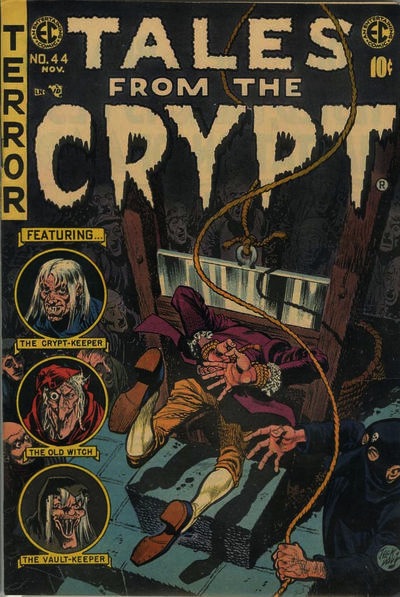 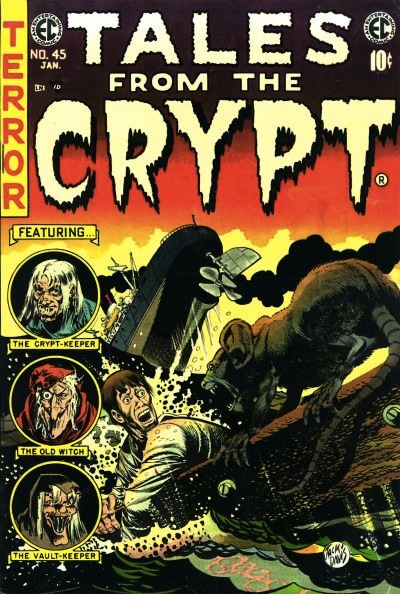 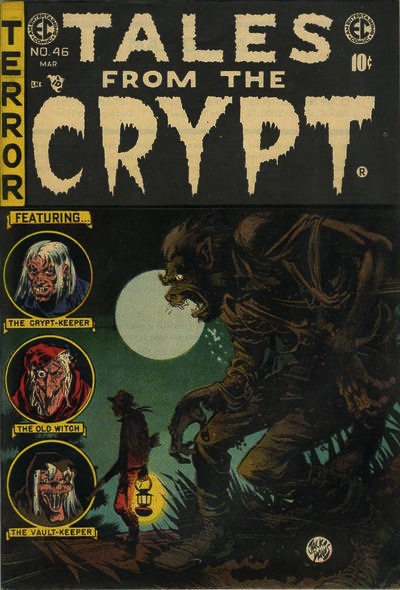 (Images via Mondo and the Grand Comics Database. Read more of Davis’ “Tales From the Crypt” comics and more about his life in Fantagraphics’ “Jack Davis: Drawing American Pop Culture—A Career Retrospective.”)

Sea-Monkeys and X-Ray Spex: Collecting the Bizarre Stuff Sold in the Back of Comic BooksGeeking Out Over the Bloody Legacy of VHS

Posters and PrintsPosters and prints enjoy a number of obvious similarities. For example, bot…