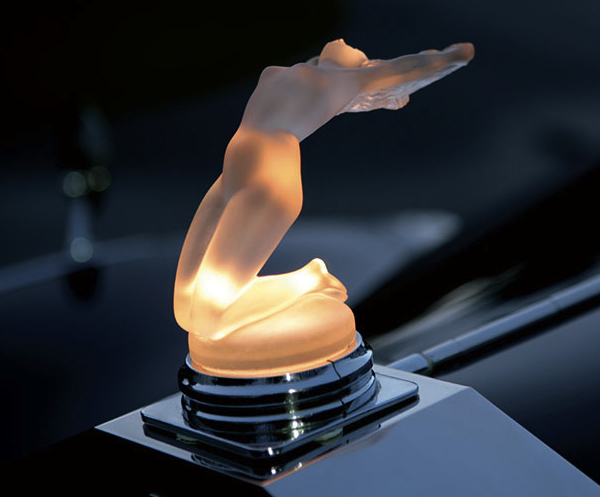 In the Silicon Valley, it’s not unusual to spot a young, overpaid, Internet entrepreneur tooling around the tree-lined streets of Palo Alto in, say, a McLaren 650S Spider, whose twin-turbo V8 engine can propel its grinning driver from zero to 60 in under three seconds, has a top speed of around 200 miles per hour, and retails somewhere north of a quarter-million bucks. Still, even those who are rich enough to spend as much on a car as most people will spend on a house probably wouldn’t adorn their four-wheeled status symbol with a vintage Lalique glass hood ornament. After all, those can run into some real money.

“One simply did not run errands with such fragile works of art mounted to the hood of one’s car.”

Lalique hood ornaments, or “mascots” as they are also called, are the subjects of G.G. Weiner’s recent book, Unique Lalique Mascots. In it, Weiner describes the Lalique mascots of the 1920s and ’30s, when the great French glassmaker René Claude Lalique (1860-1945) produced 30 different types of pressed-glass hood ornaments at his factory in Wingen-sur-Moder, Alsace. While the photographs in the book are lavish, Weiner’s text is crisp and economical, not unlike the Art Deco designs of Lalique’s falcons, swallows, and occasional saint or naked lady. 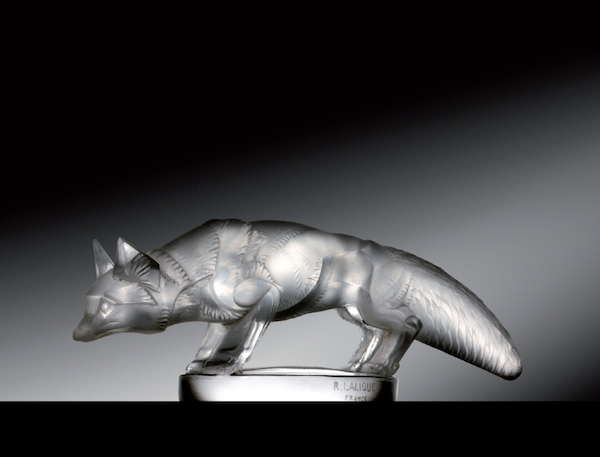 Top: Chrysis (Nude Female), mounted on the radiator base of a Rolls-Royce Silver Wraith. Above: Renard (Fox) is considered one of the rarest Lalique mascots of the inter-war years.

Once upon a time, the wealthy strapped such trophies to the radiator caps of their Bentleys, Bugattis, Citröens, Packards, and Mercedes—the McLarens of their day. But even back then, when a new Lalique mascot cost around $50 versus the $50,000-$300,000-plus they can command today, most of Lalique’s well-heeled customers only brought their glass treasures out for special occasions, like a Concours d’Elegance car show. One simply did not run errands—or send one’s servants to do so—with such fragile works of art mounted to the hood of one’s car. Lalique knew this, which is why he licensed Breves Galleries of London to fashion metal mounts for his mascots, so that his clear, gray, milky-blue, topaz, green, or orange-yellow menagerie could be tastefully displayed inside the manor where their owners were almost certainly born.

Weiner was not always such an authority on Lalique mascots, and only got into them in the early part of the current century. “I’d been dealing in automobilia like car badges and brochures for quite a number of years when I came across a Lalique mascot in an exhibition at the Retromobile show in Paris,” he says, “I made a lot of inquiries and went to the Lalique showroom in Paris on Rue Royale. They said that the mascots from the 1920s through 1930s were virtually impossible to get hold of. That set me off on a quest to try and find some. I sold off all of the automobilia I had to concentrate solely on Lalique.” 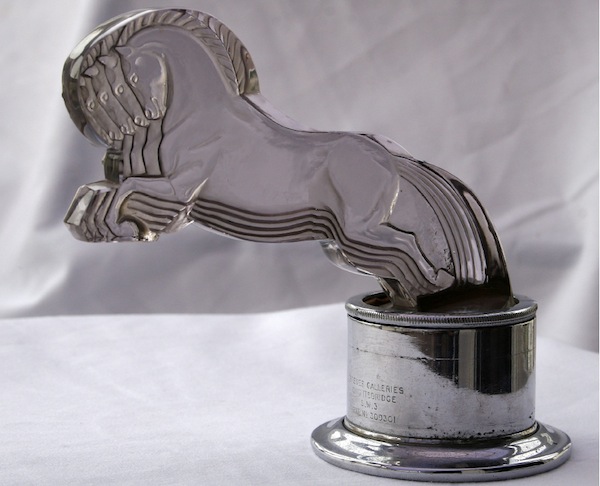 Cinq Chevaux (Five Horses, seen here on a Breves Galleries base) was made in 1925 for the new, five-horsepower Citröen 5CV.

Much of the historical research that Weiner accumulated during his quest is captured in Unique Lalique Mascots. For example, we learn that most of the mascots, 28, were designed as mascots, but the two mermaids, Sirène and Naïade, were initially sold, beginning around 1920, as statuettes and weren’t repurposed for automobiles until 1925.

Not coincidentally, 1925 was also the year of the Paris Exposition Internationale des Arts Décoratives et Industriels Modernes, from which we get the abbreviated term Art Deco. Lalique’s first three mascots were released in August of that year. One was the aforementioned falcon, while another was inspired by the shooting stars on the side of the Eiffel Tower—the comets and their tails spelled out the word “Citröen” in what was then the largest illuminated advertisement in the world, so bright that aviator Charles Lindbergh used it as a beacon to guide the Spirit of St. Louis to Le Bourget Airport in 1927. That mascot, the Comète Etoile Filante, was followed by another for the automaker, André Citröen, himself, whose new five-horsepower car, the 5CV, had just been introduced. Naturally, Lalique’s mascot for the 5CV resembled five horses in synchronized silhouette.

“That’s the only mascot designed for a specific car,” says Weiner. “All the rest are known as ‘accessory mascots.’ You would go to a supplier, buy a mascot of your choice, and put it on your car’s radiator cap.” 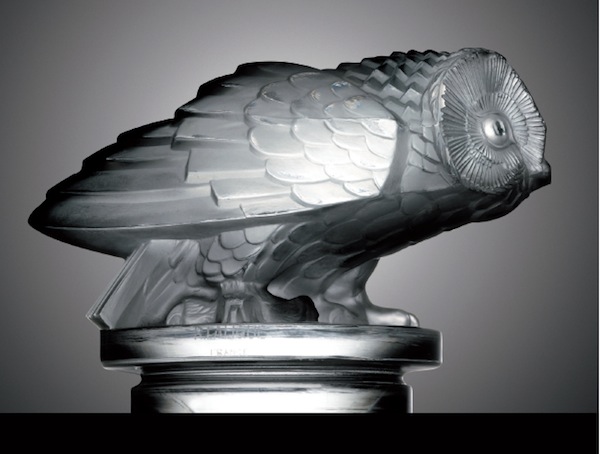 Some Lalique mascots had blue or milky hues. Hibou (Owl) was only made in clear or a frosted finish.

In the course of his research, Weiner learned a great deal about the types of mascots produced (Lalique’s animals also included eagles, rams, boars, peacocks, and frogs) and the different signatures that can be used to date them. “R. Lalique France” was the only signature on mascots made between the world wars, though their position on the mascots varied; postwar mascots are signed “Lalique France,” and the most recent of these have a small circled ‘r’ between the two words. But Weiner was unable to find any records detailing production numbers for any of the inter-war mascots, an absence of information that has only added to the Lalique mascot mystique.

“When the Germans took over the Alsace-Lorraine area, they partly closed the Lalique factory in Wingen-sur-Moder,” Weiner says. If there were production records, and Weiner assumes there were, they either no longer exist or are squirreled away in a vault or filing cabinet somewhere. “I’ve actually spoken to the Lalique family,” Weiner continues, “and they say they don’t have any records,” even though Weiner writes in his book that, “It’s known that many of the molds, original drawings, and sketches were removed by the Lalique family and stored for the duration of hostilities.”

That may explain why Weiner is somewhat skeptical of the unofficial numbers he’s been given by the family. “Most dealers and collectors will tell you that Renard, the Fox, is the rarest mascot, followed by Hibou, the Owl,” he says. “The Lalique family says that only a handful of these were produced, but I’ve been to the Lalique factory in Alsace and have seen the steel molds made for the mascots. They’re very large and must have cost thousands and thousands of pounds to produce. You wouldn’t construct a mold like that just to make, say, a half-dozen mascots. You’d make at least 50, I would think. So when the family says Lalique produced only a handful, I simply don’t believe it. But even so, of 50 mascots made in, say, 1931, a lot were probably lost, broken, destroyed, or whatever. Are there 20, or possibly 30, left? Nobody really knows.” 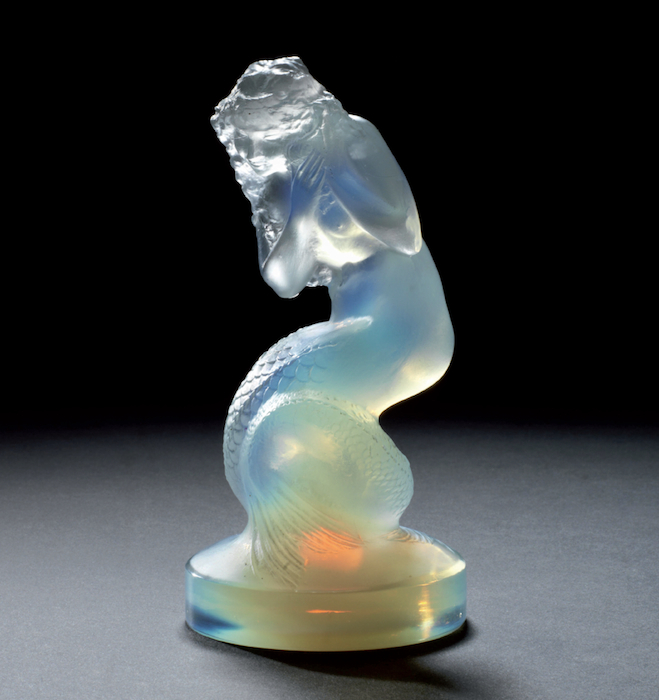 Produced as a Lalique statuette in 1920, Naïade (Large Mermaid) was transformed into a car mascot in 1925.

Priceless Tiffany Collection Flees One Earthquake Zone, Lands in Another

The VW Bug's Rare and Quirky Czech MateU.S. Studio Art Glass, Before and After Chihuly

Lalique Art GlassEven though he is known today for his antique art glass, René Lalique (1860…