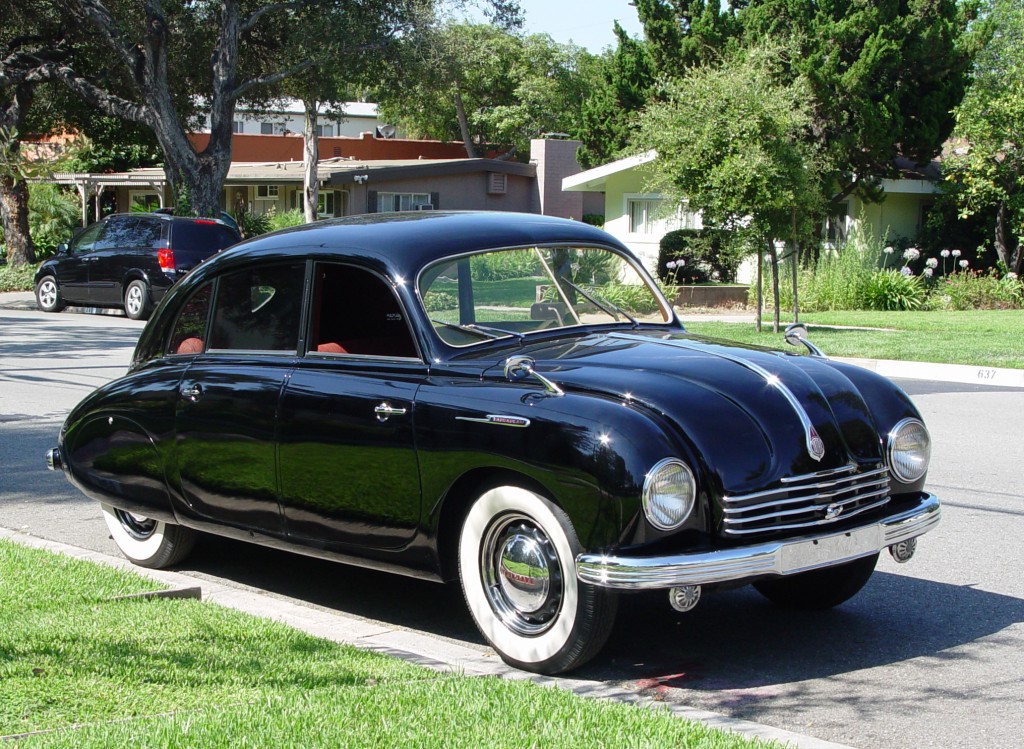 When Southern Californian Justin Pinchot is in the market for a new car, he doesn’t just head for the local Auto Row or browse the latest deals online. He goes farther, a lot farther. For example, a British Columbia mechanic located his latest ride, a 1950 Tatra T-600 Tatraplan, in a Canadian barn. “It had green moss growing on it,” Pinchot says, “but its air-cooled, rear-mounted, four-cylinder pancake engine only had about 19,000 miles, and its original red wool interior was perfect.”

“I love the weird stuff. I can’t help myself.”

How a four-door, teardrop-shaped import from then-Communist Czechoslovakia ended up in a Canadian barn is a complicated story involving war reparations, wheat exports, and anti-Communist hysteria (at the height of McCarthyism, the cars were selling so poorly, many were simply barged by the Canadian government into the Straight of Georgia separating Vancouver Island from the mainland and dumped). After its initial discovery in a B.C. barn, the car changed hands several times, but recently, Pinchot finally became the proud owner of this black beauty. “It’s absolutely my favorite car I’ve ever owned,” he says. 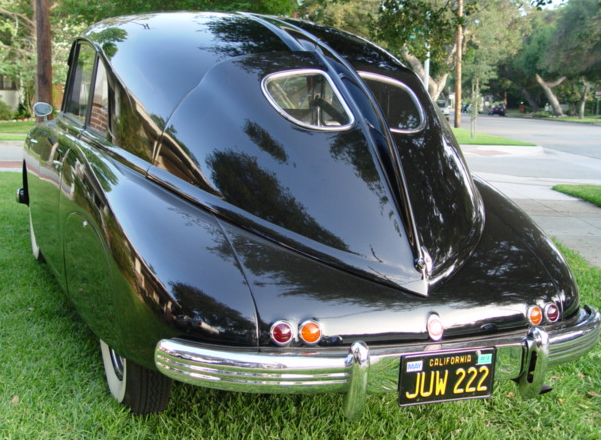 The Tatra’s dorsal fin is designed to channel air into the car’s engine compartment.

Founded in 1850 as a manufacturer of horse-drawn coaches, by 1899, Tatra was one of Europe’s leading automakers, producing a sports car that reached 71 miles per hour. Then, in 1921, an Austrian named Hans Ledwinka was named Tatra’s chief designer. Ledwinka was something of a rock star among European automobile designers between the wars. “Hitler had dinner with Ledwinka many times when he was touring Czechoslovakia prior to the war,” Pinchot says. “‘That’s the car I want for my roads’, Hitler told his designer, Ferdinand Porsche [at the time, Porsche’s company was still a design firm; its famous 911 would not be released until 1964]. It was very well known that Hitler and Porsche stole the idea for the Volkswagen Beetle from Tatra. In fact, after the war, Germany paid Tatra three-million Deutschmarks to settle a lawsuit Tatra had filed in the 1930s.”

During the war, Tatra was forced to build trucks for its occupiers, but its T-87, which is the precursor to Pinchot’s T-600, remained in production, perhaps because the three-headlight, dorsal-fin-equipped sedan was a favorite of German officers. Today, serious car collectors like Jay Leno own T-87s, and in 2010, the “New York Times” named a 1941 T-87 owned by a third Californian, Paul Greenstein, Collectible Car of the Year. 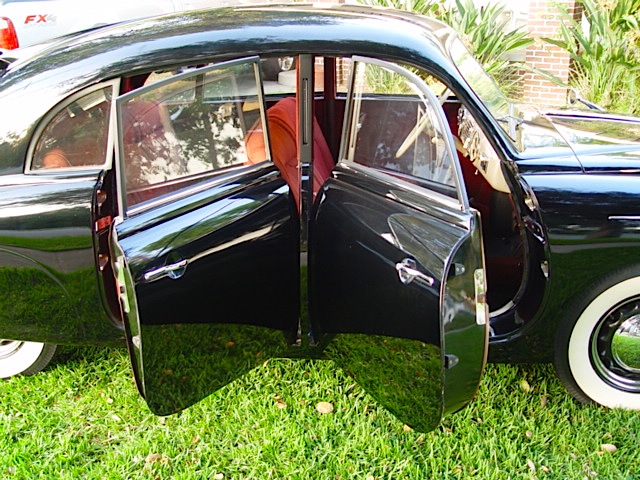 A suicide door in the front and a conventional door in the rear means both open off the car’s central pillar.

“The T-87 is very, very similar,” to the Tatraplan, Pinchot says, “except it’s much more industrial-looking, more early machine-age Art Deco. Mine looks much more like a teardrop, more fluid, later Art Deco.”

While the T-600 has only two headlights, like the T-87, it retains that trademark dorsal fin. “All the Tatra T-series cars had that,” says Pinchot. It wasn’t just for looks or aesthetics. It was to divide the air pressure that went into the air-cooled engine. If you look at the rear deck lid, there’s a space between the roof of the car and the deck lid. That’s where the air goes. It’s actually an air dam. The fin splits the air flow.” 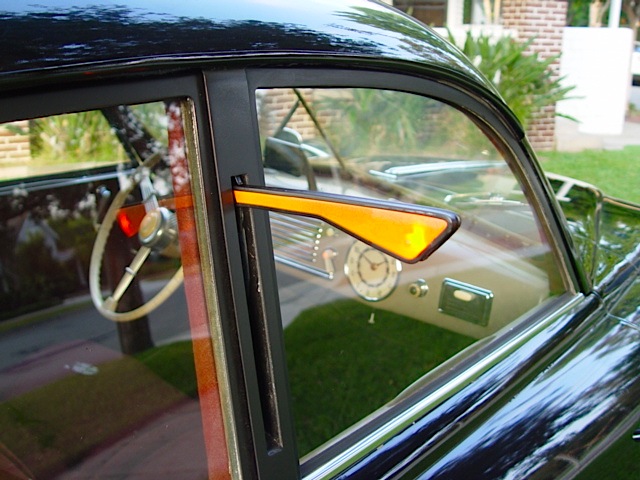 Semaphores pop out from the car’s central pillars to signal right and left turns.

Another feature of the rear-engine Tatraplan is how quiet it is. “There’s a luggage compartment between the backseat and the engine,” Pinchot says. “They did that so it would dampen the noise. You can barely hear the thing running when you’re in it.” For different reasons, Pinchot also loves the doors. “The front ones are suicide doors, they open forward. The back doors are conventional. They both open off the same central pillar.”

And then there are the semaphores, which pop out from within those pillars to signal left or right turns. “When I put those on, people almost crash into me because they don’t know what they are; they don’t realize they’re turn signals. But they’re so cool. You flip a switch, and they pop out and light up.” 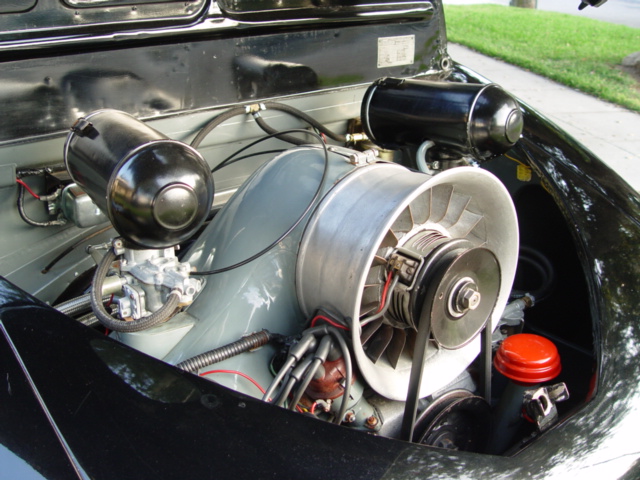 Keeping an exotic 1950 import from Czechoslovakia running is not as difficult as you might think. “It’s actually very easy to work on,” Pinchot says, “like a Volkswagen. In fact, when mine needed a voltage regulator, I got a vintage Volkswagen regulator, and it worked fine. It starts every time and runs great. So far, it has not let me down.”

In fact, the car is downright economical, getting between 25 and 30 miles to the gallon. And, as Pinchot puts it, it “hauls ass” on the highway. “It’ll easily do 85 and still have some pedal left,” he says. 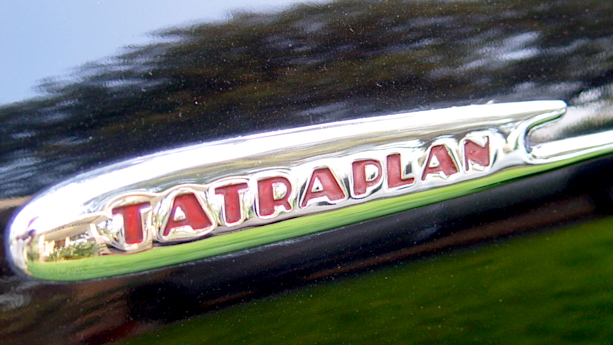 Of course, there are a few things that take some getting used to. “It’s a four-speed,” Pinchot says, “but it’s four on the column, and the shifting pattern is backwards. I have to look at the shift pattern diagram every time I drive it. First gear is—let me see if I get this right—forward and up. Second gear is straight down from there. Third gear is toward you and up. And then fourth gear is toward you and down. Don’t even ask where reverse is. It’s really bizarre.”

Pinchot is obviously quite comfortable with the bizarre, as his collection of toy robots and his last automotive love, a 1959 Goggomobil, attest. “I love the weird stuff. I can’t help myself,” he says. Nor is he alone in his affection for his Tatra. “I went for coffee with my wife and brother the other day, and I never got my coffee. They were sitting there, sipping away, but I was busy the whole time talking to people. I can’t take the thing anywhere without drawing a huge crowd. I’ve never seen anything like it.”

(Photos and video by Justin Pinchot)

For Collectors, Clear Is the New BlackRiding the Classics, from Chevys to Schwinns