Ever wondered what it’d be like to be on the set of a reality TV show? Well, if you collect comic books, Marilyn Monroe memorabilia, sterling silver spoons, Shelby Mustangs, and numerous other items, you can find out by attending the taping of The Great Big American Auction. 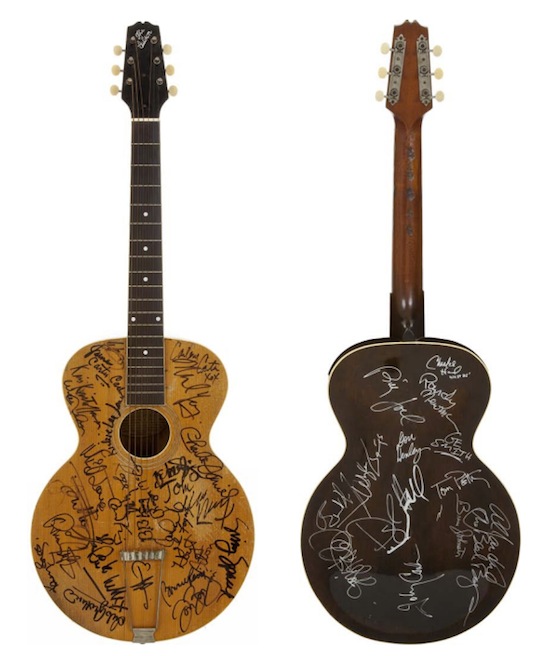 Hosted by Ty Pennington of Extreme Makeover: Home Edition, the ABC pilot will be filmed on April 16, 2011, at the Queen Mary Hotel (which is located within the Art Deco Queen Mary ocean liner) in Long Beach, California. The setting for the pilot will be a live auction conducted by Heritage Auctions. Naturally Pennington will be on hand for the taping since he’s the show’s host, so if you’ve ever wanted to meet one of TV’s most popular home-improvement hunks, this may be your chance.

Pennington, it turns out, is a bit of a guitar collector, which may or may not explain the presence of two amazing axes in the small auction. The guitar above (shown front and back) is a circa 1924 Gibson L-2, autographed at the 1985 Farm Aid by a who’s-who of rock and country—Neil Young and Willie Nelson, of course, but also Eddie Van Halen, Loretta Lynn, Joni Mitchell, and Johnny Cash, to name just a few. The other guitar on the block is a Les Paul once owned by Les Paul.

The taping is by invitation only, so if you want to attend, send an email to info@greatestamericanauction.com.

If you can’t make the taping, consider a visit to Heritage’s Beverly Hills location, where all 16 lots (did we mention the Elvis diamond ring?) will be on view on April 13 and 14.