When Medieval Monks Couldn't Cure the Plague, They Launched a Luxe Skincare Line 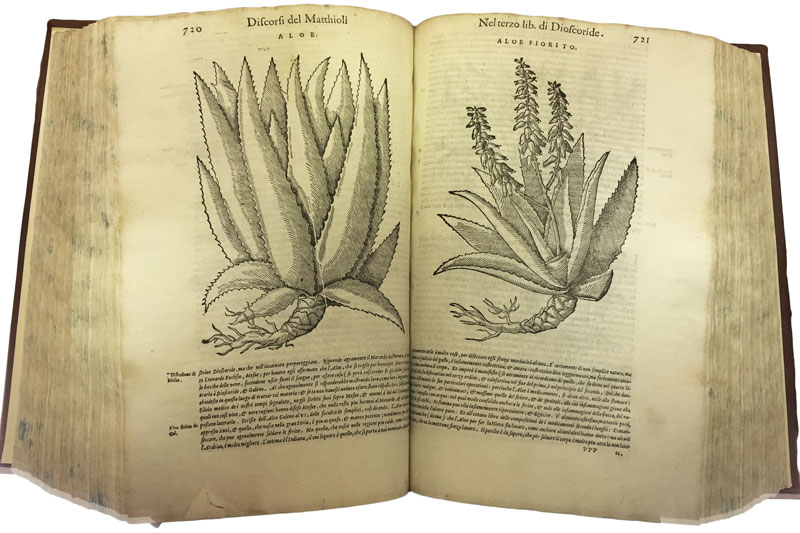 Long before the modern deluge of organic soaps, herbal remedies, juice cleanses, and lifestyle brands like Gwyneth Paltrow’s GOOP, the mindful crowd had a medieval-era source for all-natural panaceas: the Officina Profumo-Farmaceutica di Santa Maria Novella. Roughly translated as the “Perfume-Pharmaceutical Workshop of New Saint Mary’s Church,” this world-renowned cosmetics and pharmaceutical company began its illustrious life as a community health clinic at a 13th-century Florentine monastery. Whether you were European royalty desperately seeking a cure for impotence or a working-class neighbor looking for the latest deodorant, Santa Maria Novella was the place to go.

“In the monks’ book of recipes, one of the best recipes was to go and live on the hills.”

Established in 1221 on the outskirts of Florence, Italy, the Santa Maria Novella monastery was originally built alongside a small 9th-century church known as Santa Maria delle Vigne, or Saint Mary of the Vineyards, whose name evoked the site’s farmland setting just outside the city’s medieval walls. To soothe sickly parishioners in their quarter of Florence, an inventive group of friars began developing recipes for plant-based salves, tinctures, and perfumes designed to combat various ailments, from pregnancy to the plague. The friars’ earliest concoctions relied heavily on alchemy, a blending of scientific techniques with mystic and spiritual traditions.

When the church was replaced by a much larger basilica, which was completed in the 14th century, it was renamed Santa Maria Novella (“novella” meaning “new” in Italian). But even as the city expanded beyond its walls, the friars remained focused on the natural world, cultivating native and exotic plants to use in their experimental medicines. Aside from a few short closures during the world wars, the business has operated continuously since its founding, supplying loyal customers with herbal remedies and natural cosmetics for more than 600 years. 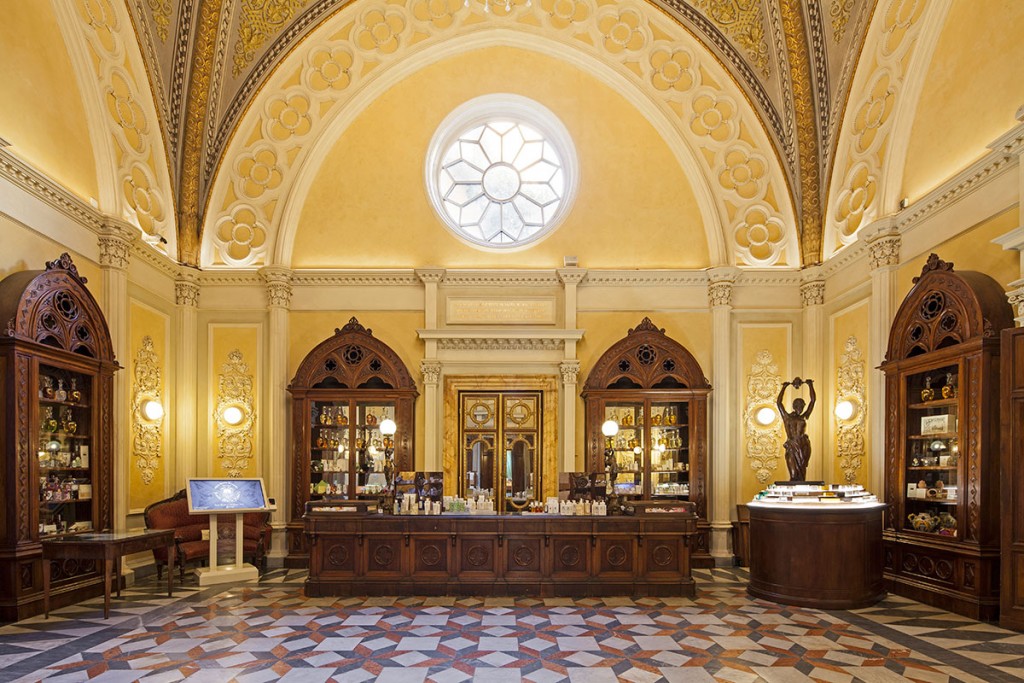 Top: The aloe plant as depicted in one of the monastery’s herbariums, which is more than 300 years old. Above: This sales room at the Officina Profumo-Farmaceutica di Santa Maria Novella is housed in a converted chapel.

Gianluca Foà, the modern company’s Chief Commercial Officer, explains that two pivotal events changed the destiny of Santa Maria Novella’s little pharmacy. “First, in 1348, as soon as the plague epidemic came to Florence, the monks started trying to make something to fight this disease by turning to nature,” Foà says. Despite various attempts to combat the illness, more than half of Florence’s population was killed by the Black Death within a few years of the initial outbreak. 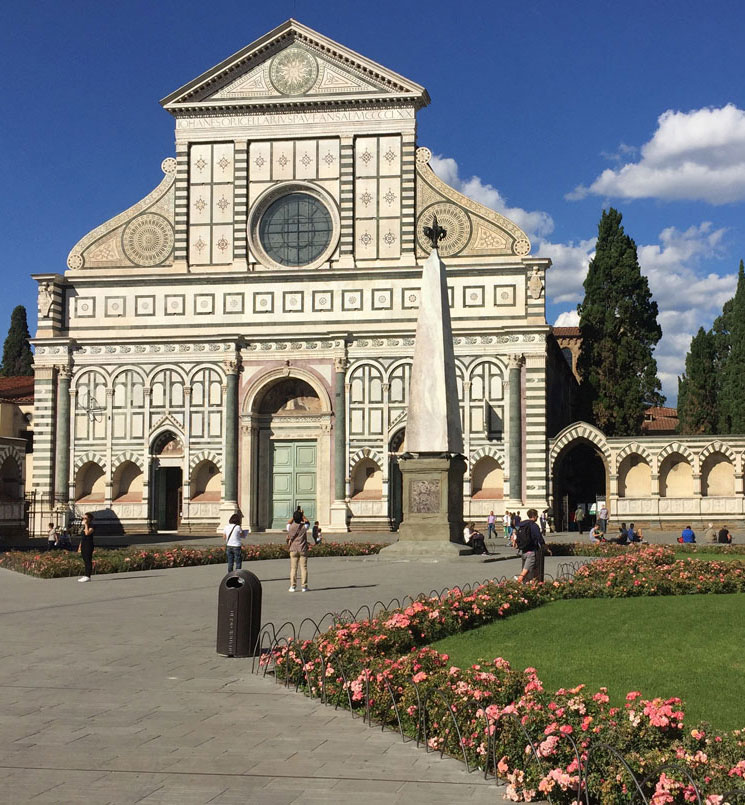 The façade of the Basilica of Santa Maria Novella was completed in 1470.

In 1353, as the city was reeling in the wake of this tragedy, Giovanni Boccacio wrote his famous book The Decameron, a collection of stories narrated by a group of young Italians sequestered from the sinister plague in a hillside villa outside of Florence. Isolation was the only reliable method for avoiding the Black Death, explains Diana Stefani, one of the current co-owners of the Santa Maria Novella cosmetics company. “In the monks’ book of recipes, one of the best recipes was to go and live on the hills,” Stefani says. “They also gave advice on changing the air in the rooms and carrying objects soaked with strong perfume,” the idea being that if you didn’t smell the plague, you wouldn’t get sick.

At some point in their studies, the friars noticed that rose petals were resistant to certain pests, and concluded that distilling the petals would create a disinfectant that could prevent humans from catching the bubonic plague. “It didn’t work at all,” Foà says, “but by 1380, they had created this rosewater tonic, which is still one of our bestsellers.” Today, the company’s rosewater products based on this original recipe are sold as skin toner.

Although many of the monastery’s medical treatments weren’t working as intended, the reputation of their cosmetic uses was growing. And a couple of centuries later, the modest apothecary lucked into a perfect brand ambassador without even trying. 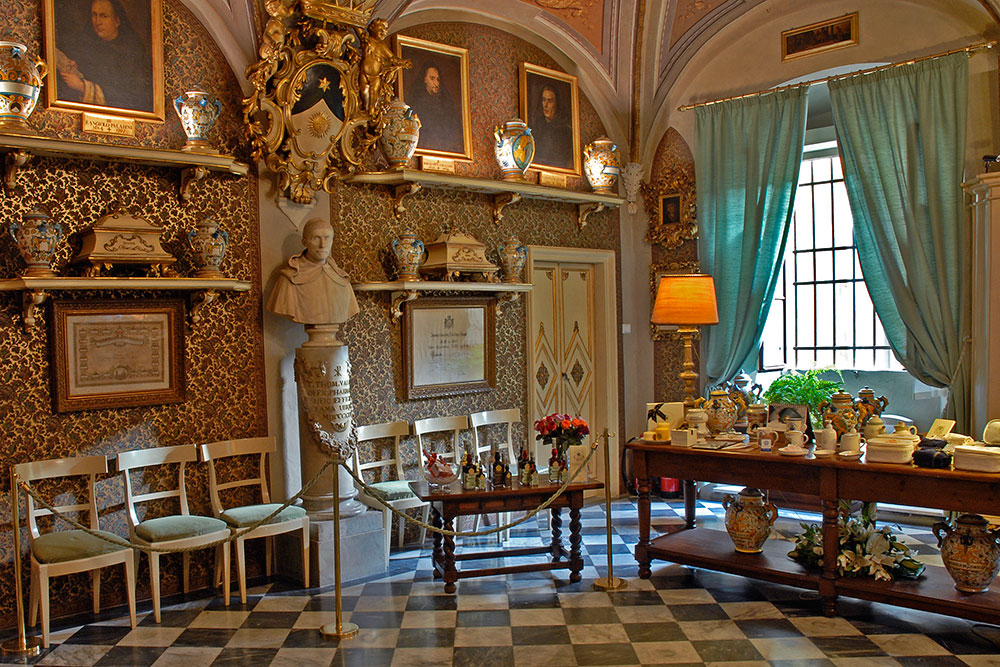 Portraits of monks line the interior of the Sala Verde, or Green Room, once a private waiting area for important guests. (Click to enlarge.)

In 1533, Catherine de’ Medici—who belonged to the most powerful and influential family in Florence at the time—married Henry II, King of France, and became Queen of France. Already the region’s prime benefactor, Catherine commissioned the monks of Santa Maria Novella to create a unique fragrance to celebrate her wedding. “The monks melded the essential oils with alcohol—rather than olive oil, almond oil, or vinegar, like most perfumes at the time—because alcohol would transmit the perfume to the skin without leaving it oily or greasy, and wouldn’t go rancid,” Foà says. The Medici perfume soon made the pharmacy famous across much of Italy and France.

As demand for their products spread to the far corners of Europe, the friars decided to open their pharmaceutical business to the wider public. In 1612, under the leadership of Fra’ Angiolo Marchissi, the business officially became the Officina Profumo–Farmaceutica di Santa Maria Novella, and with the blessing of the Grand Duke of Tuscany, the shop bore the honorable title of “His Royal Highness’s Firm.” The shop’s entrance was off of the monastery’s central cloister and still catered mostly to local customers, though its prominence was steadily rising. “It became a very important place, not just from the spiritual point of view but also politically because the first floor housed the papal apartments at a time when the pope was considered a king at the helm of one of the world’s most powerful empires,” Foà says. 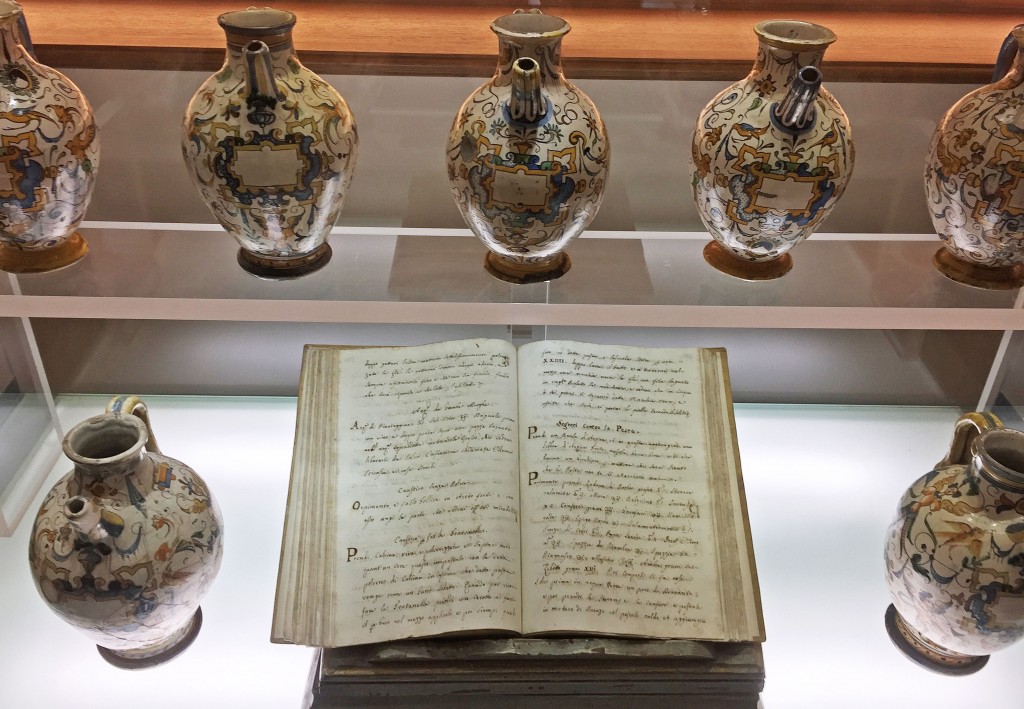 Original texts and ceramic vessels used by the friars are housed in the shop’s museum. The heading on the righthand page reads “Segreti Contro la Peste” or “Secrets Against the Plague.”

Today, the basement-level museum at the Officina Profumo-Farmaceutica di Santa Maria Novella holds several significant artifacts from the pharmacy’s earlier incarnations. In addition to ceramic vessels for storing compounds and glassware used for distillation, the museum includes a few of the rare books utilized by friars centuries ago, such as the giant Herbario (or “Herbarium” in English), a bound taxonomy of plant specimens from the known world. Such records give a good idea of the various treatments the friars were providing.

“They were dealing with everything from avoiding pregnancy to making men fertile to fighting insanity and the flu,” Foà says. “The monks updated this book with any new discoveries when explorers like Magellan brought plants from new territories back to Italy.”

Though the retail space has been expanded into several rooms originally used for religious purposes, the original sales room is still in use, featuring authentic furniture, cabinetry, and ornamental details from the 17th and 18th centuries. Several of the apothecary’s early concoctions are also produced today, though they’re no longer prescribed for severe ailments. 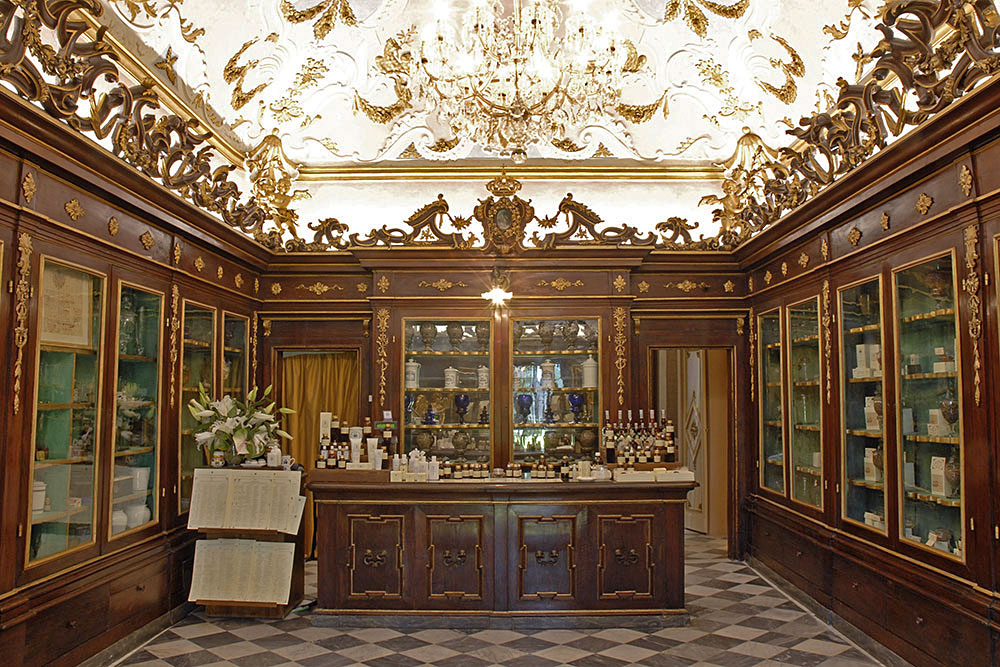 “The monks were trying to fix all these pathologies and illnesses, which eventually provided the basis for our modern cosmetics and liqueurs,” Foà says. A popular example is the deep-red liqueur known as Alkermes, based on a recipe developed in 1743 by Fra’ Cosimo Bucceli that includes cinnamon, cloves, cardamom, coriander, vanilla, and rosewater. “It was originally given to women after they gave birth to help restore them and ease the delivery pain,” Foà explains. “Now it’s used in a cake that we call Zuppa Inglese, a sort of trifle.

“Another example is Elisir de China,” he continues, “coming from the body of the Conchina tree. The active principal you extract from its bark is quinine, which was given to people affected by malaria or high fevers. Today it’s our best digestif.”

One of the company’s most fabled products is Aceto Aromatico (or Aromatic Vinegar), which was known as Vinegar of the Seven Thieves in the early 15th century. “The story says that one part of the recipe was known by each of seven thieves, so they could only make the product when they were all together,” Foà says. “They used the recipe to protect themselves so they could rob people affected by the plague, but only when they were all together could they create it. Later, it was used as a cure for fainting. Back when our grandparents were young, it was very common. We called it the salts, as in, ‘Give me the salts!’” Today, the pungent liquid is sold as a stimulant and air freshener.

In the 14th century, amid the continued success of their pharmaceutical operation, the friars added two ornate chapels dedicated to St. Nicholas of Bari. In 1848, a new public entrance was built and the larger chapel was deconsecrated and repurposed as the main sales room, which remains its function today. The smaller chapel featuring frescoes by Mariotto di Nardo is now used as a public reading room adjacent to the shop’s cafe and tea room. 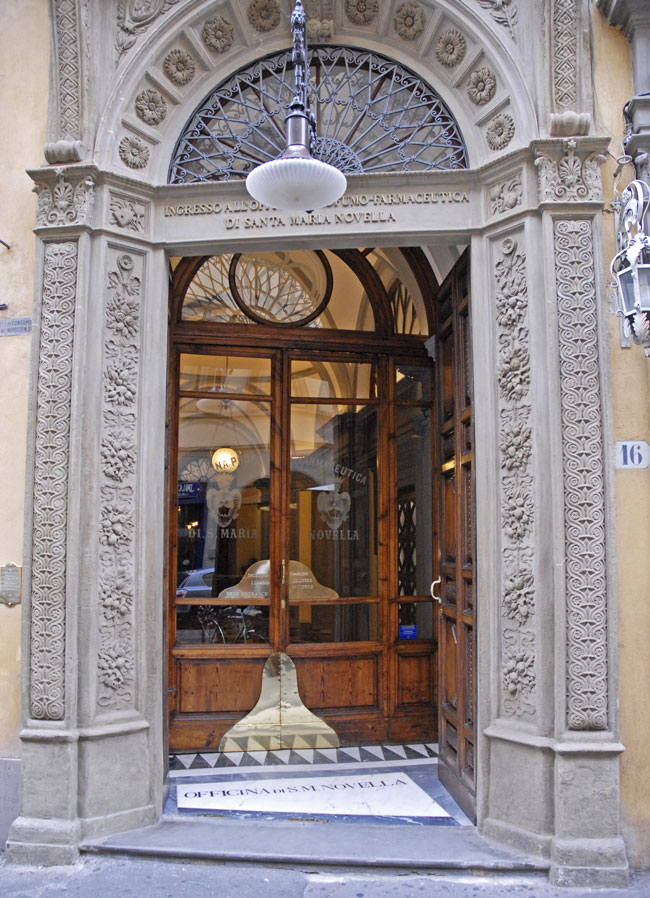 It’s easy to overlook the beautiful but understated main entry to Florence’s oldest pharmacy amid the city’s grandiose architecture.

By the mid-19th century, the company’s reach was global, as seen in the sales-room murals depicting four major continents—Europe, Asia, Africa, and America—where ingredients were sourced and products sold. Income from the company’s cosmetics helped pay for the upkeep and restoration of the neighboring church of Santa Maria Novella. But after the unification of the Italian states in 1861, the Catholic church was forced to divest of its properties and pass them to the new central government. Fra’ Damiano Beni was the final monk to manage the pharmacy, though through a special arrangement, he was allowed to cede ownership of the business to his nephew Cesare Augusto Stefani in 1869. (A descendant of this family, Diana Stefani, is one of the co-owners to this day.)

“The monks had to give ownership of the pharmacy building to the City of Florence,” Foà explains. “From that point on, laymen were managing the company, though the property is still under a long-term lease agreement with the city.” Although the management changed, Foà says the company retained its commitment to sourcing high-quality, natural ingredients for its time-tested recipes. 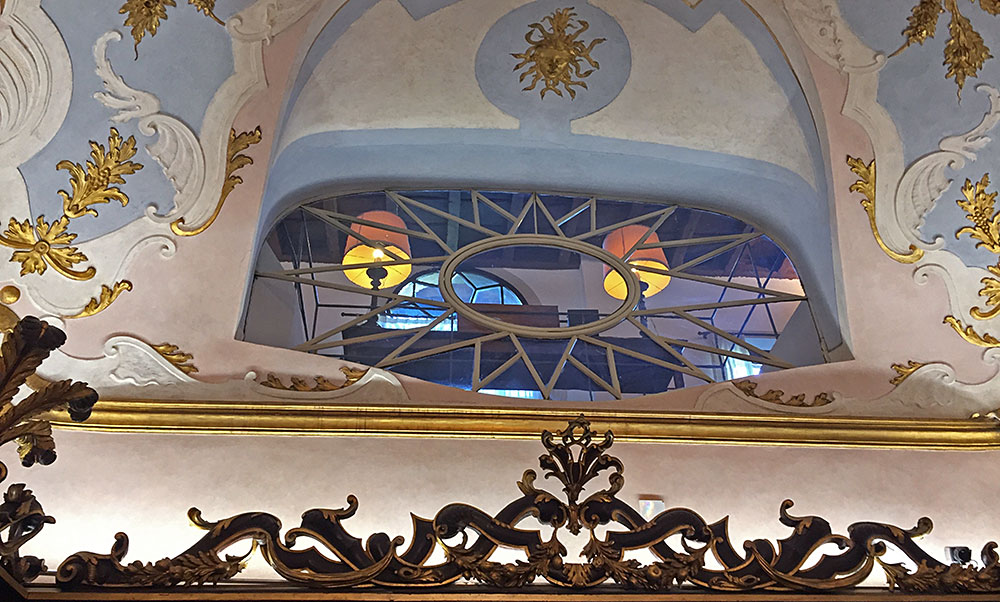 This window connected the office of the rector, who oversaw Santa Maria Novella’s monastery, with the original sales room.

Take the Florentine iris, long a favorite ingredient for perfume, which is still in high demand. “To extract the essence from its roots, you have to wait three years before they can be dried, peeled, and crushed, reducing everything to a powder,” Foà says. “You form a sort of butter to extract the essential oils, which cost around 30,000 Euro per liter. And imagine that from one ton of roots, you get scarcely one and a half liters of essential oils. It’s unaffordable for the industrial cosmetics companies, but we do it because it makes a difference in the product.”

When asked about the variations between the company’s new and old products, Foà provides samples of recently developed scents versus those based on historic recipes: While the modern perfume has a subtle floral fragrance, the ancient perfume is sharp like a pungent vinegar, conjuring the harsher smells of medieval Florence. “The needs of men and women were completely different from today,” he says. “Perfume was designed to cover the smell of trash, so it was very, very strong. Now, tastes have changed completely.”

But even as technology, medicine, and urban life shifted dramatically, the Officina Profumo-Farmaceutica di Santa Maria Novella avoided short-lived trends and stayed faithful to its roots. Relying on centuries-old recipes, the company unintentionally discovered a different kind of alchemy—the recipe for success—in a world where wrinkles and body odor are more feared than the bubonic plague. 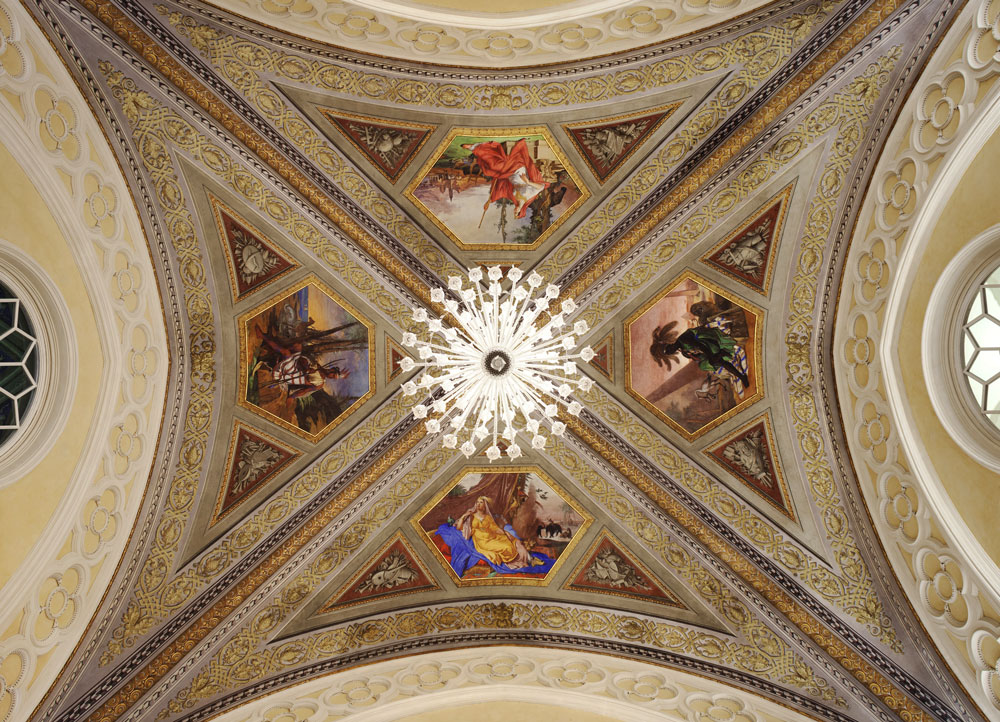 Sacred Anatomy: Slicing Open Wax Women in the Name of Science and God

How Snake Oil Got a Bad Rap (Hint: It Wasn't The Snakes' Fault)Our Pungent History: Sweat, Perfume, and the Scent of Death