This article describes the skill involved in the craft of miniature clockmaking, as well as the different types of miniature clocks (grandfather, grandmother, and grandchild), how each is made, and some of the notable manufacturers. It originally appeared in the January 1939 issue of American Collector magazine, a publication which ran from 1933-1948 and served antique collectors and dealers.

The true miniature antique clock of whatever land, is characterized by fineness of conception and skillful workmanship. Today they are among the rarities because far fewer of them were made than clocks of full-size with movements of standard proportions. From the beginning of clockmaking, however, working in the little was indulged by craftsmen of ability to demonstrate their skill and to satisfy customers who wanted timepieces that were doubly attractive because of their small size. 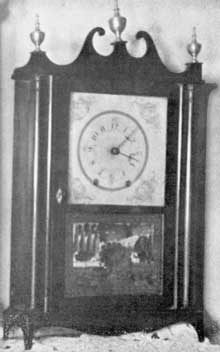 A Terry Type Clock in Miniature: The clock, about two-thirds the size of one of standard size, was made by Mark Leavenworth, Waterbury, Conn., about 1825.

Small lantern and even earlier types are eagerly sought by collectors and, while there are relatively plenty of full-sized hooded clocks of the Dutch and Friesland varieties, miniatures of them are rarely found. The so-called “canal boat” or small-sized hooded clocks of the Low Countries are practically unobtainable and few examples of them are found even in important collections.

When the clockmakers of Holland worked in the little, they made clocks of this design but the craftsmen of England and America (in the rare instances when they made miniatures) largely devoted themselves to making timepieces that were essentially reduced scale models of the tall or grandfather type.

These tall-cased clocks sometimes towered eight feet overall, and that English clockmakers did not often produce them in miniature is evidenced by the famous Weathersfield Collection. At the time of its dispersal ten years ago, this was one of the outstanding collections of English timepieces; yet it did not include a single example that could be designated as a miniature.

The tall-case clock of standard works, with a royal or long pendulum up to 65 inches in length, was first made in England about 1676. This design was followed by others in which the pendulum was shorter. They classify as the movement with a seconds pendulum, 39.1 inches long; a half second, 9.8 inches; and a quarter second, 2.5 inches, which should be kept in mind since it has a definite bearing on the size of case required. No true miniature has a case tall enough to house a movement with a pendulum of this length.

Considering the grandfather as the standard size, a simple and sensible classification of the clocks of this design in descending sizes is, grandfather, grandmother, and grandchild.

The grandfather group may be subdivided into the tall type, which may range from over eight feet in height to not less than six feet five inches; and the shorter type, sometimes, and I believe erroneously, called the grandmother, which runs from about five feet to the lower limit of the tall group. Such classification is logical, since all these clocks vary principally in the height of the case. The movements are those of the standard grandfather clock in size and proportions with the 39:1 inch seconds pendulum.

A Grandchild Clock: The movement is a watch. The case 9 1/2 inches tall.

The true grandmother clock has a case from three to four feet tall with other dimensions in proportion. Their cases tend to what would be called a short-broad type in human beings. Here the movement as well as the case is of reduced size. It is difficult to find grandmother clocks, whether of English or American provenance. I believe the invention was of English origin and generally they are of the type of clock made about 1770.

The timepiece which we classify as the grandchild is not a true clock. It is simply a solid case about a foot high with a watch movement instead of that of clock design with weights and pendulum. In essence it is a tall clockcase in miniature, forming a framework for a watch and as such is more of a novelty.

About 1770 Simon Willard and a few others of the American grandfather clock period, experimented with a wall clock of small size. It was about a foot high, of great beauty and fine workmanship. Of the very few examples still extant, one is illustrated. Quite possibly the American grandmother clock may have been created to replace these.

An examination of auction catalogues over a decade reveals only about six grandmother clocks; and of these, the majority were made by Joshua Wilder of Hingham, Mass., about the close of the 18th Century. The movements were of the grandfather type but distinctive in size. Such clocks, of course, could not use the same pendulum as that common to the full-sized grandfather, since the cases were scarcely more than 39 inches tall.

Wilder has been credited with the invention of the grandmother clock, but it is doubtful if he did more than introduce the idea into this country from an English model. Naturally, however, freedom of inventiveness increased as America ceased to depend on Europe for clock parts. Early works were often assembled foreign parts only.

A Friesland Miniature: A very small example, made about 1680.

A true grandmother clock should have properly proportioned and typical works; yet, many examples offered contain either full-sized grandfather or banjo movements. It is possible that banjo works in a small grandmother case might be original, since a banjo clockcase from the bottom of the door to the upper edge of the bezel may measure about 29 inches.

Barber reports one true grandmother movement measuring 31/2 inches by 51/2 inches. But he mentions a Pennsylvania type that in my opinion classifies as an atrocity as do various alleged efforts of Eli Terry and others. I consider the Pennsylvania clocks parallel or caricature the Massachusetts shelf clock.

There is no such thing as a miniature banjo clock of collector’s interest, as far as I know. That a miniature type of Terry clock existed is known to only a few. Fewer still have seen them; possession is even rarer. However, an example in practically proof condition was on display in one of the booths at the New York Antiques Show, Hotel Commodore, last October. It was by Mark Leavenworth, a prolific maker of the later standard and alternative Terry type clocks when the “Improved Clock” label was adopted sometime between 1820 and 1830.

The most striking feature about this example was the comparatively small dial circle and the large amount of white space outside it. The opposite holds with practically all shelf clocks except those of Norris North, Norris North & Co., and Edith North, some of which are slenderized attempts at dwarfing the Terry type.

The hands of the Leavenworth clock are of the cross type and undoubtedly original. This style is found on certain mirror clocks. Otherwise, the true Terry proportions are so closely followed in the case and the design so truly maintained that, without a standard example for comparison, the smallness seems unapparent. The central finial is large; the two side ones, miniature. The label differs slightly from that of an alternative carved Terry type by the same maker, which I own. The weights are flat instead of round. The works show the known Leavenworth peculiarities and are of proper proportions for a true miniature. The glass has one of the standard rustic scenes. 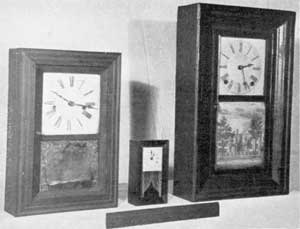 Three Variations in Size: Left to right, a miniature by Manross; center, a very small example made quite late by the New Haven Clock Co.; and right, a small size of the standard clock in ogee case made by J. C. Brown.

The real day of the miniature clock may be said to have ended with this Terry modification. Three comparatively late miniatures are illustrated, however, to complete the story.

The first is an iron clock of simple design made by the Terry Clock Company, Waterbury, Conn., on the S. B. Terry patent of 1868 and 1869. It is six inches high. The works show the designing of this member of the Terry family in his less inspired moments. Steeple clocks were not made in the little until about 1880, when an unknown maker patented a fairly pleasing but crudely made example shorter than the Terry type just mentioned.

However, a distinctly beautiful and unusual miniature clock in a case of the ogee design was produced about 1890 by the New Haven Clock Company, presumably as a final effort to find a market for this type by making is as small as possible. With the example I have, the door glass is in one piece; the lower part simulates a curtain through which the moving pendulum is revealed. The dial is paper.

To sum up, then, the miniature timepiece has existed from the early days of clock history with attractive forms in the small lantern clock (including the Japanese varieties); the true grandmother, which apparently never appeared with wooden works; a curious group of foreign wall clocks which may have suggested a most attractive form of miniature wall clock to Simon Willard and others. 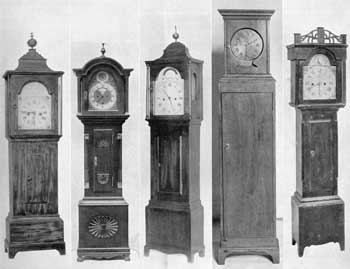 ClocksThink of antique clocks, and a stately grandfather, German cuckoo, or Art D…