This photo essay shows the steps glass blowers took to create intricate hand-blown glass items (‘from bubble to goblet’). It originally appeared in the February 1938 issue of American Collector magazine, a publication which ran from 1933-1948 and served antique collectors and dealers.

Although the gaffer and his servitor seen in these pictures wear the clothes of today, they are actually following the same steps and using the same tools that glass blowers have used for centuries. These pictures, taken at the Steuben works of the Corning Glass Company, show the successive steps in making a piece of fine hand-blown glass. The tools, blow pipe, pontil rod, bench, tongs and wooden paddles are practically the same as those used in making the rarest off-hand specimens of American glass. 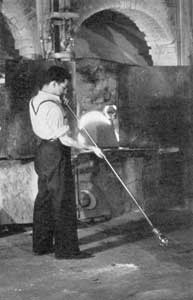 The Start, Blowing the Bulb: Standing before the furnace, a glass blower has expanded the gather of molten glass on his blow pipe. When finished this will be the upper part of the goblet. 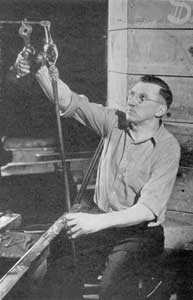 Applying the Stem: Here the gaffer, seated at his bench and using parrot shears, is steadying a gather of glass, as it is applied to the bulb with a pontil rod that will form the goblet stem. 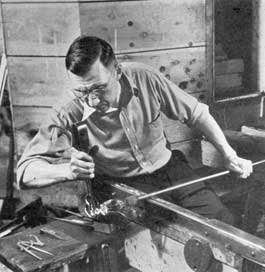 Shaping the Stem: Using a steel fork, as he rolls his blow pipe back and forth on the arms of his bench, the gaffer is giving the goblet stem the desired form. The upper part of the goblet is still attached to the blow pipe and the stem design can be seen. 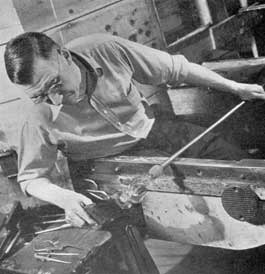 Forming the Foot: A second gather applied with the pontil has provided the material for the goblet foot. Here the gaffer, rotating his blow pipe back and forth on his bench arms, is shaping the foot with a palette of applewood. To prevent burning it is frequently dipped in water as the shaping progresses. 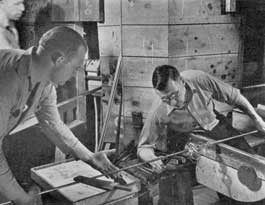 Attaching the Pontil Rod: Stem and foot having been formed and worked to the desired shape, the next step is to attach the pontil rod to the base. The gaffer is seated at his bench and his servitor, or helper, is seen at the left holding the pontil rod in position as it is made fast to the foot. 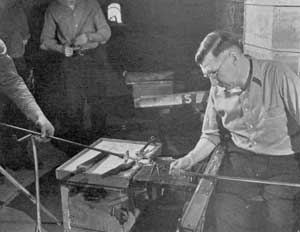 Freed from the Blow Pipe: Here the goblet, firmly attached to the pontil rod, has just been removed by the gaffer from the lower end of the blow pipe by a sharp blow preparatory to forming the upper part or bowl. 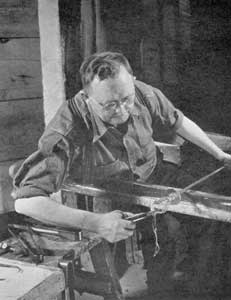 Trimming the Bowl: The goblet is now attached only to the pontil rod. The gaffer is cutting away excess glass with shears from the end where the blow pipe was once attached preparatory to widening and shaping the bowl of the goblet. Just before this step the piece was reheated in the hell hole to make it soft enough to be easily worked. 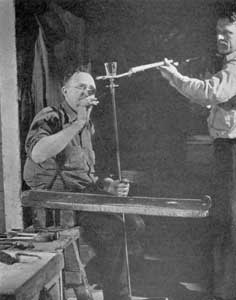 Ready for the Lehr: The goblet is now made and the gaffer is freeing it from the pontil rod as his servitor holds the fork by which the finished piece, still too hot to handle, will be taken to the annealing lehr for the gradual process of cooling. When cold the roughness where the pontil was once attached will be removed at a series of grinding and polishing wheels.

Art GlassArt glass sprang from a revolution in glassmaking in the mid-1800s, when gl…