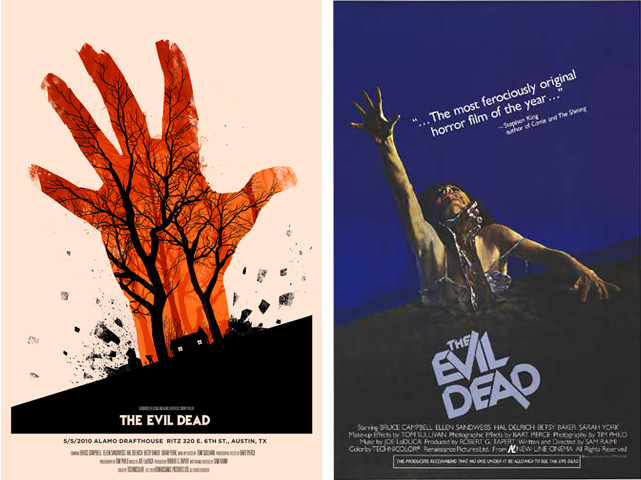 Most serious movie-poster collectors search for that perfect copy of “The Bride of Frankenstein” from 1934, “Casablanca” from 1942, “The Day the Earth Stood Still” from 1951, or Alfred Hitchcock’s “Vertigo” from 1958. But for the last half-dozen or so years, a new type of collector has appeared, one whose sights are set on contemporary, limited-edition, signed-and-numbered, screenprinted posters designed not by the marketing departments of Hollywood studios but by some of the biggest names in rock-poster art.

The King Kong, if you will, of this burgeoning movement is an Austin, Texas, company called Mondo, which is part of a small chain of movie theaters and eateries known as Alamo Drafthouse. According to Mondo’s creative director, Justin Ishmael, the idea of creating new posters for old films grew out of an event started in 2005 by Rob Jones, who remains a key part of the Mondo team. That event, the Rolling Roadshow, featured outdoor screenings at the locations of famous films—“Close Encounters of the Third Kind” at Devil’s Tower, “Bullitt” in San Francisco, etc.

“Rob came up with the idea of taking the rock-poster and gig-poster thing and applying it to movies,” says Ishmael. “He does all the stuff for the White Stripes, so he knows a lot of the guys in that scene. At the time Jay Ryan was our biggest name, so when everyone saw that Jay Ryan did a poster for us, they thought it’d be fun, too. All these guys are giants for us now, but they were just doing it for fun at the time.” 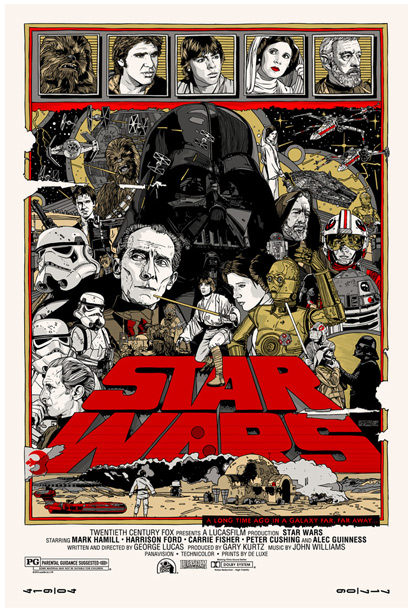 Tyler Stout is one of Mondo's most collected artists. His "Star Wars" posters have quadrupled in price. At top, artist Olly Moss brought a minimalist eye to his Mondo poster (top left) for "The Evil Dead," a Sam Raimi horror film from 1981.

Since 2009, when Ishmael became creative director, Mondo has published limited-edition, screenprinted posters for some of the biggest franchises in film, including “Star Wars.”

“If you do a poster for ‘Star Wars,’” says Ishamael, “people are naturally going to take notice. But we like to do stuff for smaller movies, too. We just did something for ‘Werewolves on Wheels’ [a cult biker-horror flick from 1971]. Earlier this year we did a Bill Lustig series. We did his ‘Maniac,’ ‘Maniac Cop 2,’ and ‘Vigilante’ movies. In the position we’re in, we can do pretty much whatever.”

Part of Ishmael’s job, he believes, is pairing the right artists with the right movies. “We can take guys that have a certain style, like Daniel Danger, for instance, and we can put him on a movie that has lots of mood. Or take Olly Moss. He has a very distinct look. A lot of people compare him with Saul Bass, but I think he has a lot more range. Saul Bass could do anything, I’m not taking anything away from him. But everyone’s trying to do minimal now, everyone’s trying to do Saul Bass-looking stuff. Only Moss does Moss.” 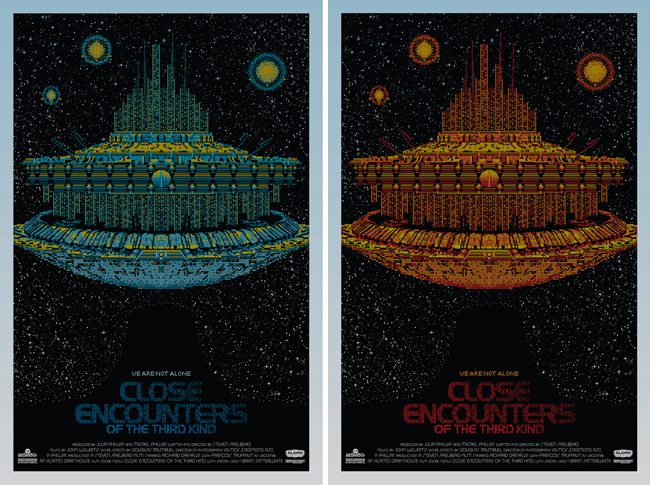 As in the rock-poster world, variants are a key part of Mondo's publishing strategy. Todd Slater's "Close Encounters" poster on the left was printed in an edition of 300; the gold version on the right was limited to 100.

In 2010, Mondo published about 120 posters. In 2011, that number will probably top out somewhere between 175 and 200. Not surprisingly, Mondo’s output and success has not gone unnoticed by the traditional movie-poster community. For example, Rudy Franchi, who is a movie-poster expert for PBS’s “Antiques Roadshow,” is well aware of Mondo, but he tends to look at what it does in a historical context.

“There’s a history of movie theaters doing their own posters,” Franchi says. “In the 1920s, Batiste Madalena painted posters for movies shown at the famous Eastman Theatre in Rochester, New York. Then there’s Peter Strausfeld, who designed the posters for the Academy Cinema in London after World War II. He made hand-drawn woodblock posters for all the famous films of the time, ‘The Seventh Seal,’ ‘The 400 Blows,’ ‘Rashomon.’ They come up for auction all the time now and are very collectible.” 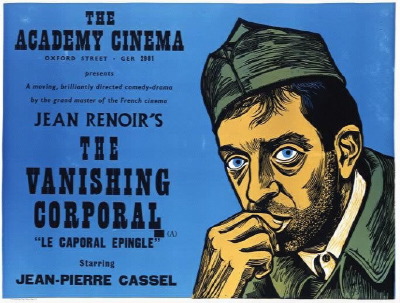 London's Academy Cinema hired artist Peter Strausfeld to create posters for the movies it showed from the end of World War II until 1980.

“I had absolutely no background in art, graphic design, or printmaking whatsoever,” O’Daniel says. “But I had picked up a few things hanging out with artists Ron Donovan and Chuck Sperry, and one day I decided to give it a shot. After I did ‘Peeping Tom’ for the Film Society, I went over to the Castro with a ‘Grey Gardens’ poster I had done on spec. I walked in there with it and asked them if they wanted some posters made. Fortunately for me, they said yes.” Since 2009, O’Daniel has produced more than 50 posters for the Castro, each in editions of about 100 or so, many hand pulled on his kitchen table. 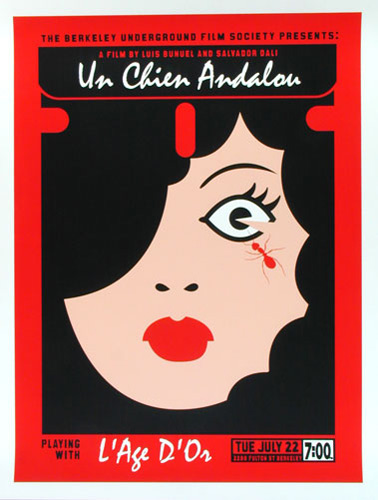 Known for his posters for bands like Gogol Bordello, Scrojo produced this eye-catching image for the Berkeley Underground Film Society.

Mondo, says Franchi, is in a league of its own. “They’ve taken it a step further,” he says. “They release these things in small editions online, and are actually sold out within anywhere from 30 seconds to just under 5 minutes. And within minutes of that they’re on eBay. Some of the people who buy these posters haven’t even received them yet, and they’re already selling them on eBay. It’s just amazing.”

Here’s an example of how amazing. At the end of 2010, Mondo published a set of posters for the three original “Star Wars” movies by Tyler Stout, whose posters are particularly prized by fans of the jam band Phish. Each 24-by-36-inch poster was printed in an edition of 850 and priced at $50 each. According expressobeans.com, a poster-fan site that also tracks sales on eBay, today the average price for the set is just under $650. Mondo also published a so-called variant edition in a smaller run of 275 each. These sold for $100 each, but you’d probably have to pay north of $850 for a set of the three today. 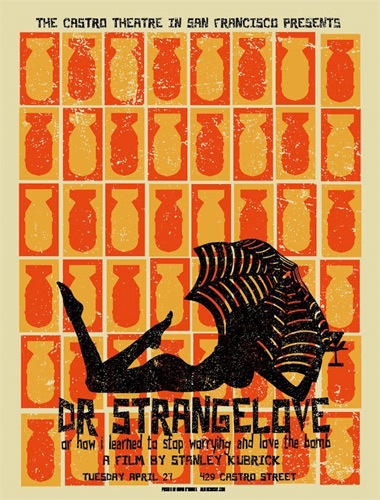 Since 2009, David O'Daniel has designed and hand-printed more than 50 posters for San Francisco's Castro Theatre.

“That mentality has nothing to do with collecting,” says King. “It has to do with greed. That’s really where it’s at. It’s not necessarily based on the intrinsic value of the piece or the meaning of the piece to someone for whatever reason. It’s all about money, which I think is really unfortunate.”

“In a perfect world,” says Ishmael, “we’d love it of everybody who actually bought a poster wanted to hang it on their wall, but about 10 percent of any run always ends up on eBay, no matter how big the edition. People want us to police eBay, they want us to do all this stuff to prevent reselling, but technically there’s nothing illegal about it.”

In fact, he says, the secondary market is probably the only way most people who want a particular Mondo poster will ever get one since they sell out so quickly. “You will have to pay a premium for it,” he admits, “but if it’s the poster you have to have, at least you’ll be able to get it.” 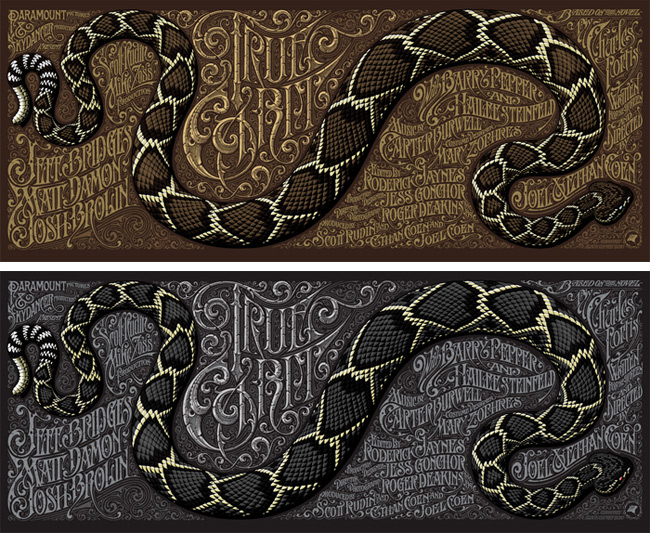 Recently, Hollywood studios have hired Mondo to create posters for first-run films. This poster by Aaron Horkey for "True Grit" was produced in two runs of 400 (top) and 110 (bottom).

“Movie-poster collectors couldn’t care less about edition size,” agrees King. “It’s meaningless to them. When a movie poster comes out, what’s a small-run, 20,000? They’re huge. The idea of these things being signed and numbered in the first place is somewhat artificial.” 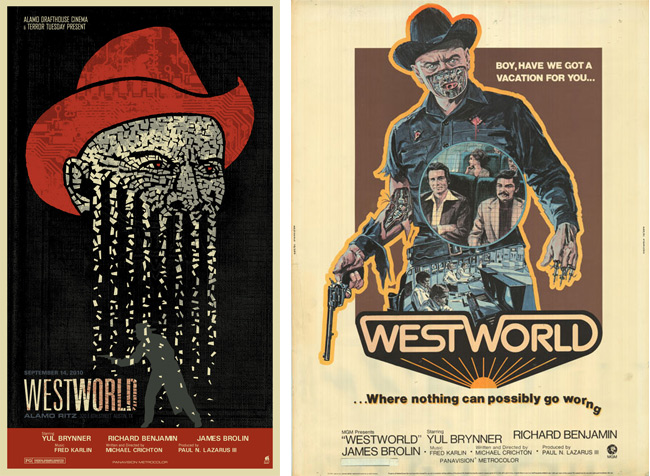 The Mondo version of "Westworld" by Methane Studios (left) alongside its 1973 original.

“We understand the nature of the collectors,” counters Ishmael. “We sell out pretty quickly so people are always trying to get us to print more. They say, ‘Why don’t you have unlimited runs or open editions’ and stuff like that. But that’s not what we want to do, and that’s what’s going to kill it if we just whore it out that way. I’m not going to deny that we could do that, but how long would it last? You need to be responsible to the artists, too. A lot of them make a living off of this stuff, so there are a lot of things that come into play. It’s more than just Mondo making money.”

Besides, he says, Mondo is more than just a virtual shopping experience. “When we did the Shepard Fairey ‘They Live’ screening, a lot of dudes from Expresso Beans flew down and had a big meet-up.” Still, despite the opportunity for collectors to meet each other, press the flesh with a world-famous artist, and watch John Carpenter’s 1988 cult classic, the online market was present even at this live event. “We debuted the poster online during the movie. By the time we got up onstage and showed the poster to the audience for the first time, there were already five or six of them up on eBay. We thought that was funny.” 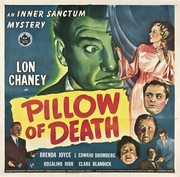 Hunting Down the Most Collectible Movie Posters, from 1930s Horror to 1960s Sci-FiReal Hollywood Thriller: Who Stole Jaws?