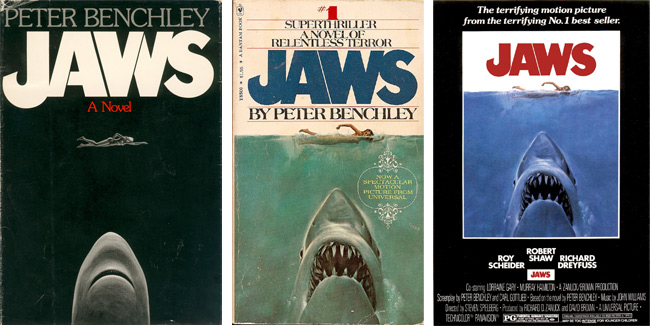 The first pages of Peter Benchley’s 1974 novel, “Jaws,” as well as the opening minutes of Steven Spielberg’s 1975 blockbuster, begin with the attack of a young, late-night skinny dipper named Chrissie Watkins, who’s dragged to her watery doom by a great white shark, feeding in the waters off the seaside vacation town of Amity. The book and film struck a chord, in no small part because they capitalized on our fear of the unknown—in this case, of being chomped to death by untold rows of unseen teeth.

“It was stolen. It’s hanging in Hollywood somewhere.”

Depicting that fear, or at least the very moment before it, was a key part of the book’s and film’s marketing. Paul Bacon, one of the foremost book illustrators of the 20th century, created the original black-and-white image for the Doubleday hardcover (above, left). But the artist credited with creating the quintessential “Jaws” image is Roger Kastel, who became famous in the 1970s for his movie posters, including “The Empire Strikes Back.” Kastel produced the oil-on-board painting that became the cover of the Bantam paperback (above, center) and the Universal Studios “Jaws” poster that followed (above, right).

Like any good thriller, the story of how Kastel’s painting journeyed from his New York studio to Hollywood is riddled with twists, turns, and blind alleys. As for its ending, Kastel’s tale still doesn’t have one—the whereabouts of his valuable original art have been a mystery since it was sent to Universal almost 40 years ago. 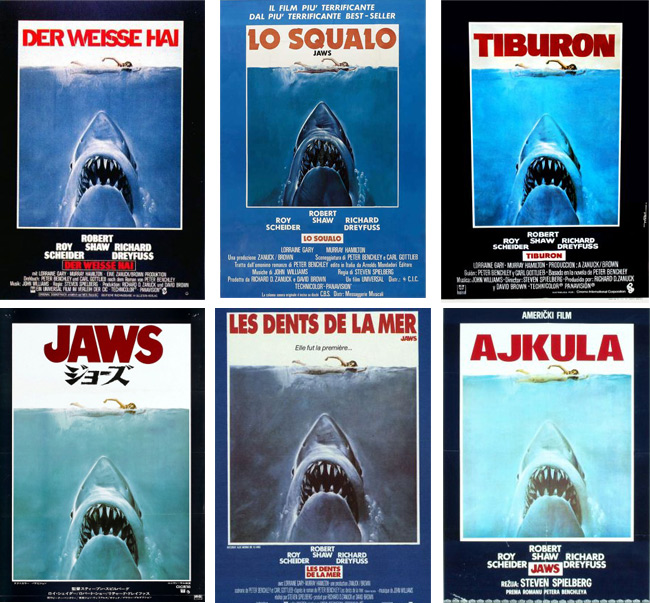 Although the title of the “Jaws” movie poster has been translated into numerous languages, the proximity of swimmer to shark needs no interpretation.

Though the cover concept was born in Doubleday’s New York City offices in 1974, it was not the publisher’s first instinct for Benchley’s novel. Instead, Doubleday’s design director, Alex Gottfried, asked book illustrator Wendell Minor to depict Amity as seen through the jaws of a shark.

“I did a painting looking straight at the shark’s open mouth, with this seaside village in the distance,” Minor recalls. “I wasn’t all that thrilled about the concept, I didn’t think it worked, but that was the direction they wanted me to go in.”

In fact, the concept did not work at all, and the Doubleday executives knew it. They also knew the book was going to be huge—Hollywood producers were already fighting over the film rights, so they wanted to get it right. Gottfried called Minor for a makeover, but Minor was out of town, so the design director turned to Paul Bacon, a trusted publishing hand who Minor had apprenticed for, to execute a totally new concept.

According to Minor, the suggestion of a swimmer above and a shark below probably came from Gottfried, although Minor is quick to acknowledge that Kastel’s painting for the paperback took Bacon’s minimalist composition for the hardcover to the next level. “All the elements were there for what became Roger’s wonderful illustration,” Minor says. “His illustration summed up not only the book, but it did a beautiful job for the movie, too.”

Kastel recalls the day “Jaws” dropped into his lap: “I had just delivered a painting to Bantam’s art director, Len Leone,” he says. “Bantam was just loaded with great artists at that time, and Len really gave Bantam its look. I was sitting in Len’s office when Oscar Dystel, Bantam’s publisher, came in. He said, ‘Wait a minute. Don’t leave. I have a great book for you to read’. And he ran out and came back with ‘Jaws.’” 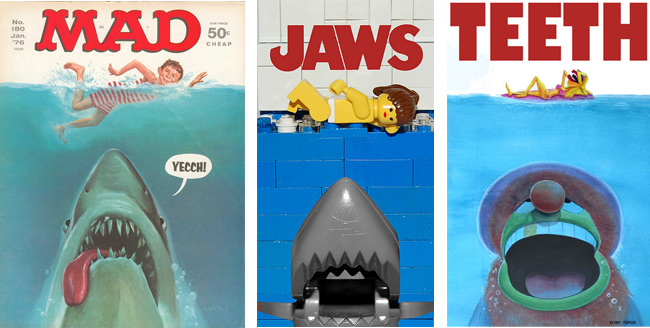 Roger Kastel’s “Jaws” image has been a rich source of good-natured parody.

As Kastel remembers it, Dystel was not a fan of the Doubleday cover and wanted Kastel to look at the cover with fresh eyes. “He wanted me to read the book to pick out a new part to illustrate. But, of course, the best part was the beginning, where Chrissie goes into the water nude.” Turns out the Doubleday concept, if not the execution, was not so bad after all. Kastel did a sketch for Dystel and Leone to critique. “The only direction Oscar and Len gave me was to make the shark bigger, and very realistic.”

To research his new assignment, Kastel went to the Museum of Natural History, whose photo department was his frequent source for reference materials. “They didn’t have anything I could use,” he says, “so I asked if they had a shark exhibit. They said they did but that it was closed for cleaning. It was lunchtime, so I went upstairs anyway, and there were all these different stuffed sharks, just laying on boards. I had my camera with me so I took a few pictures. The shark in my painting developed from there. I just tried to paint a ferocious-looking shark that was still realistic.”

By all accounts Kastel succeeded, although the graphic nature of Kastel’s image (its nudity, not the impending violence) got the paperback banned in Boston, Massachusetts, and St. Petersburg, Florida. “I thought that was the end of my illustration career,” Kastel says. “Boy was I ever wrong. Bantam loved the publicity. It was great for book sales.”

It caught the attention of Universal, too. “Apparently Universal had tried other poster ideas, but in the end they picked mine. They changed the color of the ‘JAWS’ lettering, added the actor names and other credits, and blurred the girl’s breasts with some foam.” Upon its release, “Jaws” immediately became the biggest movie of all time (replaced a few years later by “Star Wars”), making Kastel’s image world famous.

In fact, the attention lavished on Kastel’s cover prompted a lawsuit between Doubleday and Bantam. “Bantam was taking credit for the entire cover,” says Minor, “but Alex said, ‘No. It was our concept, based on our original design’. You can even see the similarity in the typography. It wasn’t exactly the same as on the paperback and movie poster, but it was a very similar look. I got a fairly decent-sized check out of it,” he adds. “Paul got one, too.” 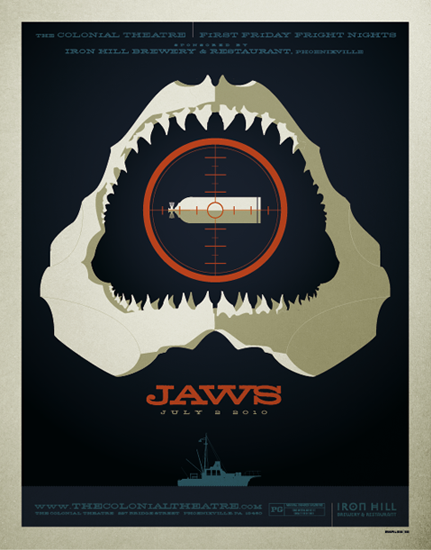 Some “Jaws” fans have complained that Tom Whalen’s poster for a 2010 screening contains a spoiler, but, as the artist puts it, who doesn’t know how “Jaws” ends?

Source aside, it was Kastel’s execution that made the image an instant icon. “I think Kastel’s poster, like much of the best poster art of its era, tells the movie’s story instantly while making you want to learn more,” says Tom Whalen, who has made numerous second-generation, or tribute, movie posters for an Austin, Texas, publisher called Mondo. Whalen also gives props to the unnamed graphic artists at Universal who placed Kastel’s image amid the typography required to promote a movie. “The cool blue water situated opposite the blood red title just seals the deal,” he says.

Minor’s praise for Kastel’s work is equally unequivocal. “Paul’s jacket isn’t bad,” he says of Bacon’s hardcover illustration, “and it still holds up in a certain way, but it can’t hold a candle to Roger’s dramatic realism for the paperback and the movie poster. Whether Roger likes it or not, that’s one of the great icons of American pop culture.”

Would that our story concluded there, with a happy Hollywood ending, but somewhere along the line, Kastel’s painting disappeared. Kastel remembers his last glimpse of his approximately 20-by-30-inch painting. “It was hanging at the Society of Illustrators in New York,” he says. “It was framed because it was on a book tour, and then it went out to Hollywood for the movie. I expected it to come back, but it never did.”

“It was stolen,” asserts Minor flatly. “It’s hanging in Hollywood somewhere. That’s happened to me in the past, too, where a piece of artwork will disappear and then it’ll show up on eBay, or something. That artwork would be quite valuable today.” 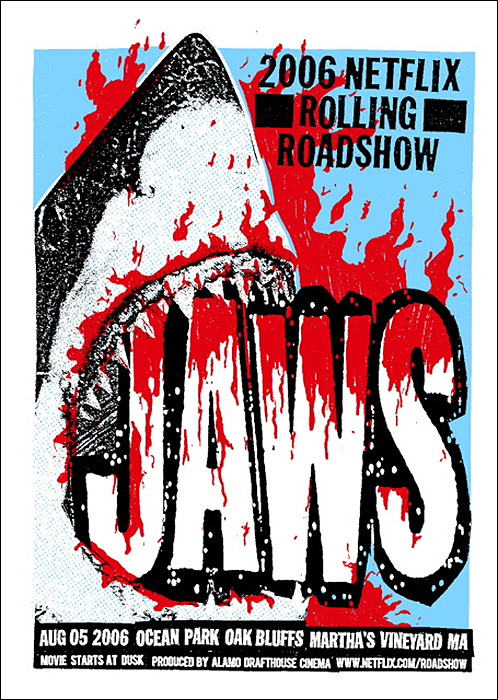 Print Mafia’s poster for Mondo is as toothy as Kastel’s original, but here it’s the movie’s title that’s getting chomped.

“Antiques Roadshow” appraiser Rudy Franchi wholeheartedly agrees. “Most original art for movie posters does not do that well,” he explains. “The art world treats it as commercial flotsam, while poster collectors believe that if it isn’t on paper, it’s not a movie poster. There are exceptions, of course, and the artwork for ‘Jaws’ would be one. This is one of the most powerful images of the last century, and the fact that it’s not just the art for a tawdry movie poster but also for a proper book would broaden its appeal. There are some fanatic ‘Jaws’ collectors out there who would rent their soul to have this. I would estimate a sales price north of $20,000, with a much higher price quite probable.”

“A sketch that I did years ago for ‘The Empire Strikes Back’ was auctioned off recently for a lot of money,” says Kastel simply. And what does he think happened to his “Jaws” painting? There are really only two possibilities. “Either someone has it or it’s lost in storage at Universal. They really should report it as stolen.”

Apparently this sort of thing is not uncommon in Hollywood, and it happens to some of the biggest names in the business. “Drew Struzan wrote me once,” Kastel says of the legendary movie-poster artist, whose credits include “Raiders of the Lost Ark,” “Back to the Future,” and “The Thing.” “He said it took him years to get the art for his ‘Star Wars’ poster back.”

These days, Kastel is mostly focused on his fine art, although he does attend a couple of movie memorabilia events a year. That’s when he’s reminded that for many fans, he’ll always be the shark guy. “When I’m at a convention and signing prints, people tell me stories about how they were afraid to go in the water when the book and movie came out, but that they really like the image. They might’ve been frightened at the time, but they aren’t now. They love the shark. Hopefully, it will come back to me one day.”