Helen Hall, an expert in entertainment memorabilia and the director of Dig Gallery in London, alerts us to a beautiful Fender Stratocaster that’s coming up for auction at Christie’s. 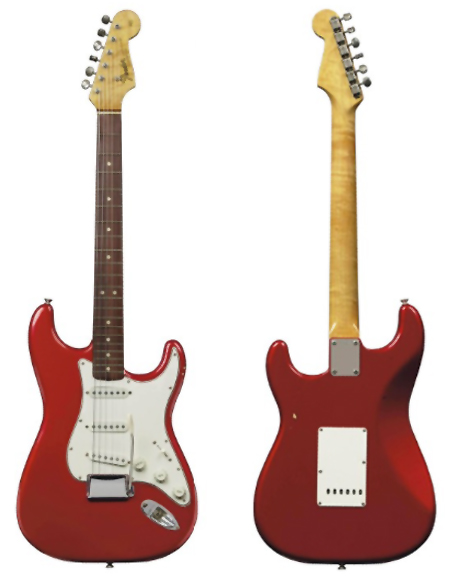 This guitar was purchased in 1965, when a young girl from New York City discovered rock ‘n’ roll. Knowing she was a big fan, her father went to a local New York City music store and bought her a brand new guitar so that she could learn to play just like all those musicians she so admired. The guitar was a beautiful bright red Fender Stratocaster—it came with a white leather strap. What more could a young girl want?

But soon after receiving the guitar, the girl saw Andres Segovia in concert and fell in love with the classical guitar. From then on, her Strat was consigned to the closet while she learned to play like Segovia. Thus, the red Fender Stratocaster spent the next 40 years under beds and in closets until this month, when on April 29, 2011, it will be offered in the Christie’s auction of Fine Musical Instruments in New York.

The guitar shows almost no sign of having been played, is in extraordinarily good condition, and is poised to cause a great deal of excitement among collectors. Its red color is one of the rarer custom Fender colors of that time period—Fender applied a metallic silver ground coat before the red laquer, so this guitar has a lovely translucence not seen in later examples. The guitar also retains its original case, a spare set of strings, and the original instruction manual. The guitar is literally in “as new” condition and as such, it is estimated to bring between $30,000 and 50,000. The young girl, now all grown up, has Andres Segovia to thank for that.

Fender GuitarsBorn in a barn in 1909, Leo Fender seems an unlikely father of rock ’n’ rol…