Read My Rings: The Oldest Living Tree Tells All 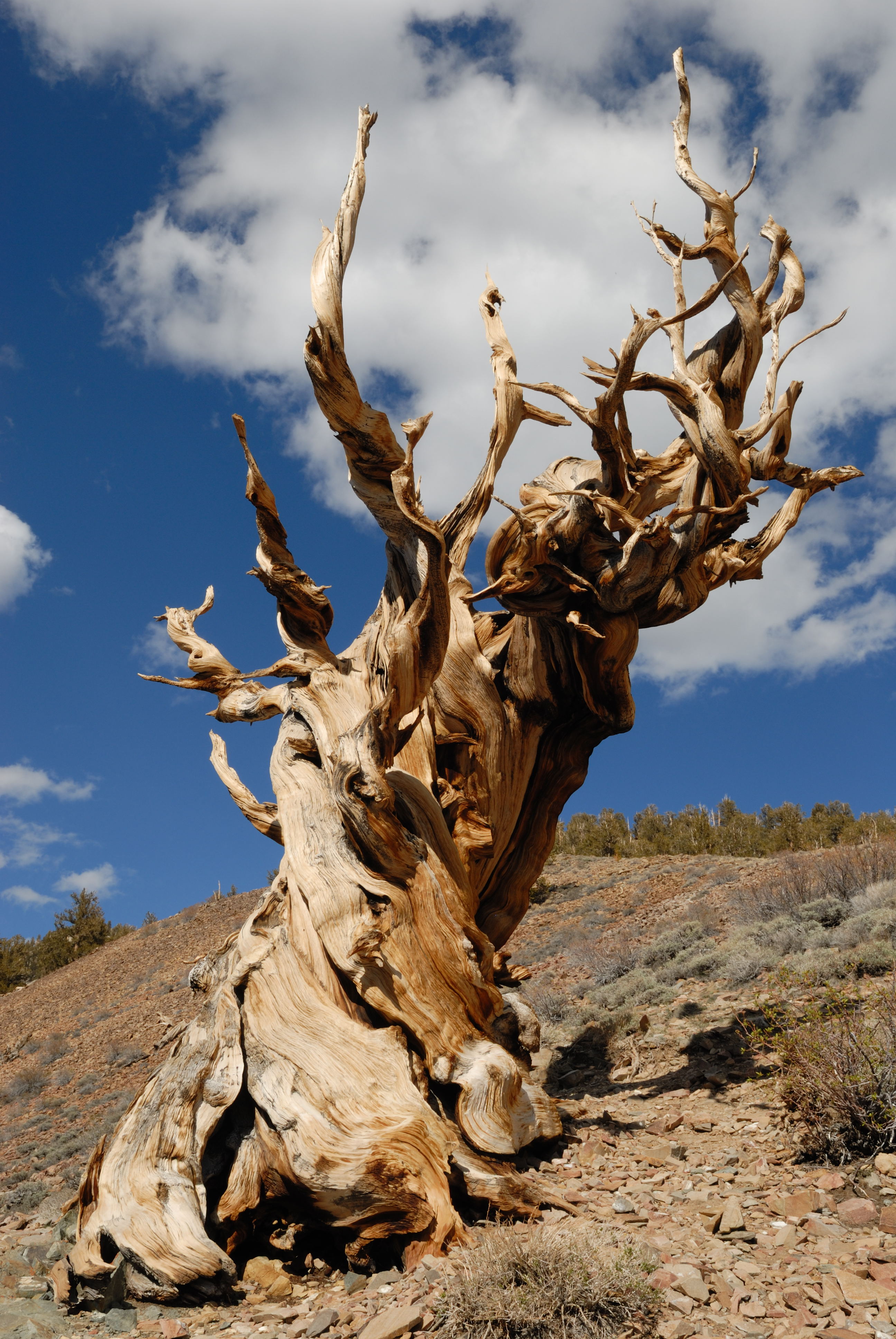 In 1964, a geologist in the Nevada wilderness discovered the oldest living thing on earth, after he killed it. The young man was Donald Rusk Currey, a graduate student studying ice-age glaciology in Eastern Nevada; the tree he cut down was of the Pinus longaeva species, also known as the Great Basin bristlecone pine. Working on a grant from the National Science Foundation, Currey was compiling the ages of ancient bristlecone trees to develop a glacial timeline for the region.

“Bristlecones are slow-growing and conservative, not the grow-fast, die-young types.”

Currey’s ring count for this particular tree reached backward from the present, past the founding of the United States, the Great Crusades, and even the Greek and Roman Empires, to the time of the ancient Egyptians. Sheltered in an unremarkable grove near Wheeler Peak, the bristlecone he cut down was found to be nearly 5,000 years old, taking root only a few hundred years after human history was first recorded. How could a half-dead pine barely 20 feet tall outdo the skyscraper-height sequoias, commonly thought to be the oldest trees alive?

The longevity of Great Basin bristlecones was first recognized in the 1950s by Dr. Edward Schulman, who shocked a scientific community that believed in a correlation between long lifespan and great size. Schulman systematically sampled Great Basin bristlecones in California and Nevada, and published his findings in a 1958 National Geographic article, which revealed several of the trees to be more than 4,000 years old. Schulman’s analysis supported the idea that “adversity begets longevity,” or that the severe conditions in which the bristlecone pine evolved actually helped extend its lifespan. 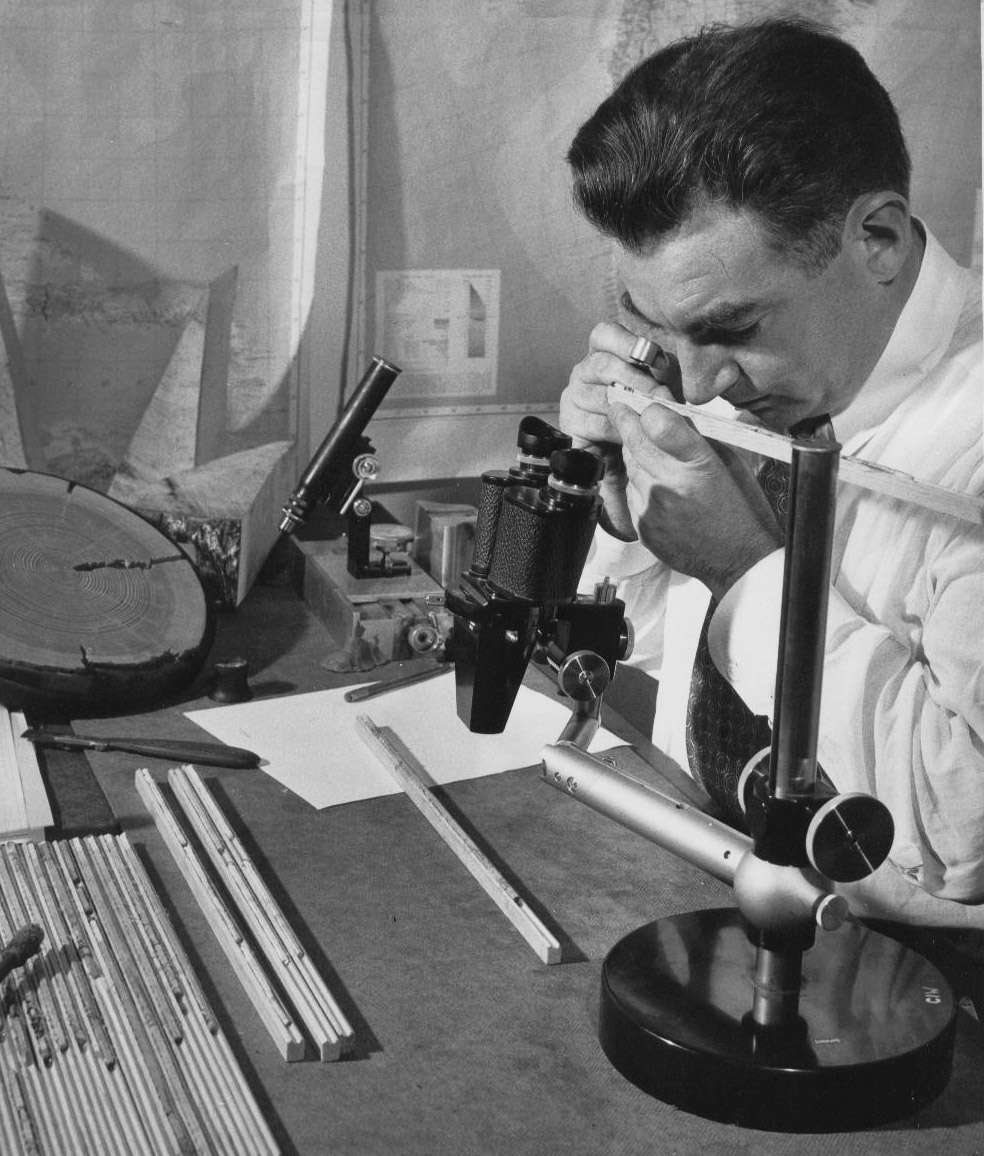 Bristlecone pine trees thrive in a rough, high-altitude environment, where there is little competition for resources from other plants. “Bristlecones tend to produce denser wood, which is more resistant to decay and damage from microbes,” says Anna Schoettle, an ecophysiologist with the U.S. Forest Service, Rocky Mountain Research Station. “Because their habitats are so harsh, the trees grow far apart, so fire and other disturbances tend not to sweep through those areas as frequently. Lightning may strike and kill a single tree, but it won’t necessarily spread to the neighboring trees.”

Even if a large portion of a bristlecone is damaged by erosion or fire, small strips of living bark, which Schulman called “life lines,” are able to function and keep the tree alive.

“Bristlecones will grow a thousand years or so, and then the bark will start dying off on one side,” says Tom Harlan, a researcher at the Laboratory of Tree-Ring Research at the University of Arizona. “Therefore, the tree can’t support the branches directly above that area, and they die. Pretty soon you’re left with a small strip of bark, which is supporting all of the foliage. It might be only 2 inches wide, but the pine is still considered a growing, healthy tree.” 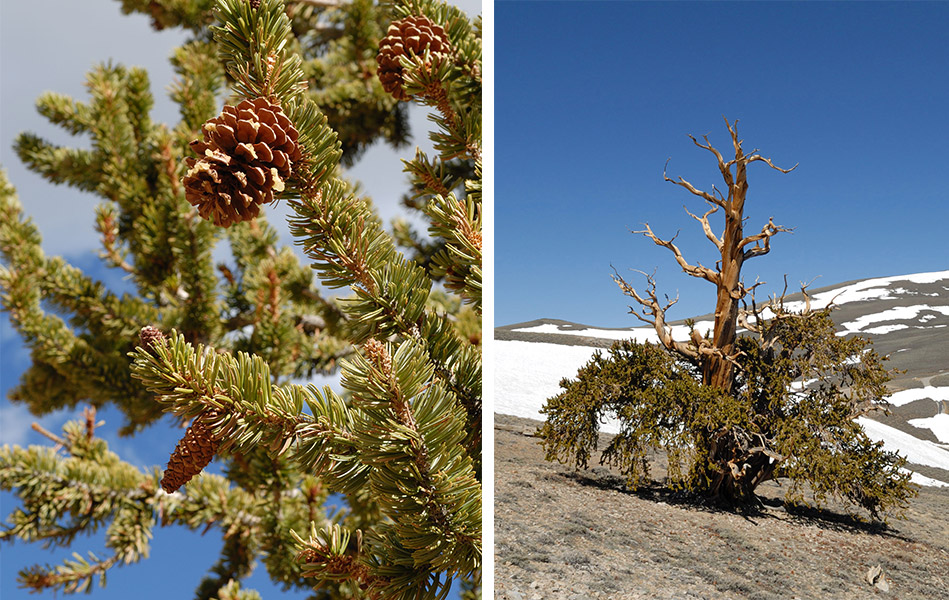 A close-up of bristlecone foliage and a lone tree that’s equal parts living and dead. Photos by Nick Turland.

Bristlecones generally don’t even reach seed-producing maturity until between 30 and 50 years of age, and can take hundreds of years to reach only a few feet in height. “Their focus is on survival and not on competitive ability,” says Schoettle. “They’re slow-growing and conservative, not the grow-fast, die-young types.”

Perhaps to the benefit of the bristlecone, our cultural obsession with all things big has meant that we’ve mostly left them alone. During the 19th century, the lure of the Western United States depended on promises of vast farmland, sweeping mountain vistas, and gigantic trees. Towering far above the human plain, the enormous sequoias became a tourist destination in their own right.

But conservation hadn’t caught up with capitalism, and before the significance of these trees was fully understood, people were chopping them down to build houses or wacky roadside amusements. In 1881, a hole large enough to accommodate horse-drawn vehicles was cut through the living Wawona tree in Yosemite National Park. Wawona remained one of the park’s top attractions until it collapsed in 1969. 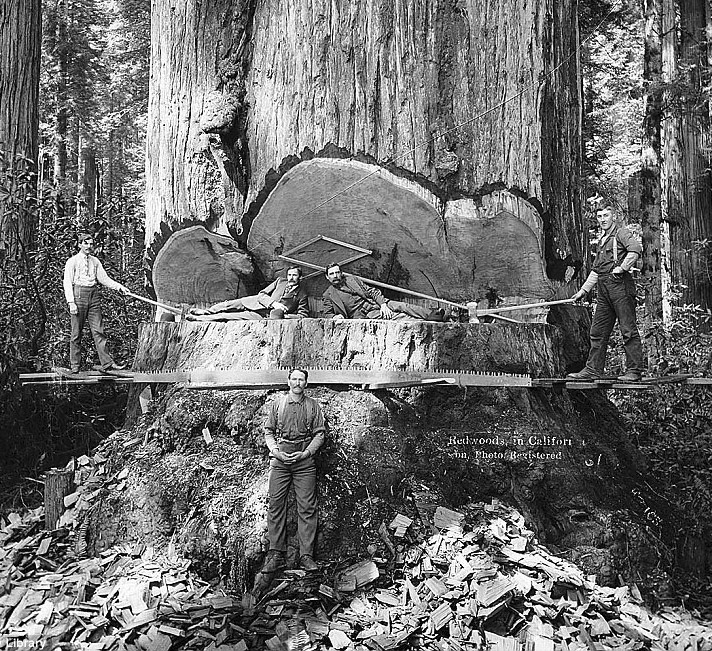 In the early 1900s, felling California’s redwoods was considered an amazing feat of manpower rather than the destruction of a natural resource.

Despite their rugged beauty, the bristlecone’s incredible age isn’t obvious to the untrained eye, meaning the species is largely ignored by a snapshot-hungry public looking for the tallest tree around. “That’s something that people tell us all the time,” says Harlan. “‘You want an old tree?’ they say. ‘We got an old tree.’ In the majority of cases, they’re referring to a big tree and not necessarily an old tree.”

But the bristlecones have other enemies besides humans, like a deadly, non-native fungus called white pine blister rust, whose impact has been worsened by accelerated changes in the regional climate. As much as the Forest Service cares about protecting our oldest living trees, they’re also worried about the longevity of the species as a whole. “We’re trying to maintain the adaptive capacity and survival of the species,” Schoettle says. “And that’s not an easy feat with the changing environment that we’re in now.” Besides protecting living trees against human destruction, the Forest Service is engaged in projects to preserve the tree’s reproductive abilities by collecting seeds and studying its natural resistance to white pine blister rust. 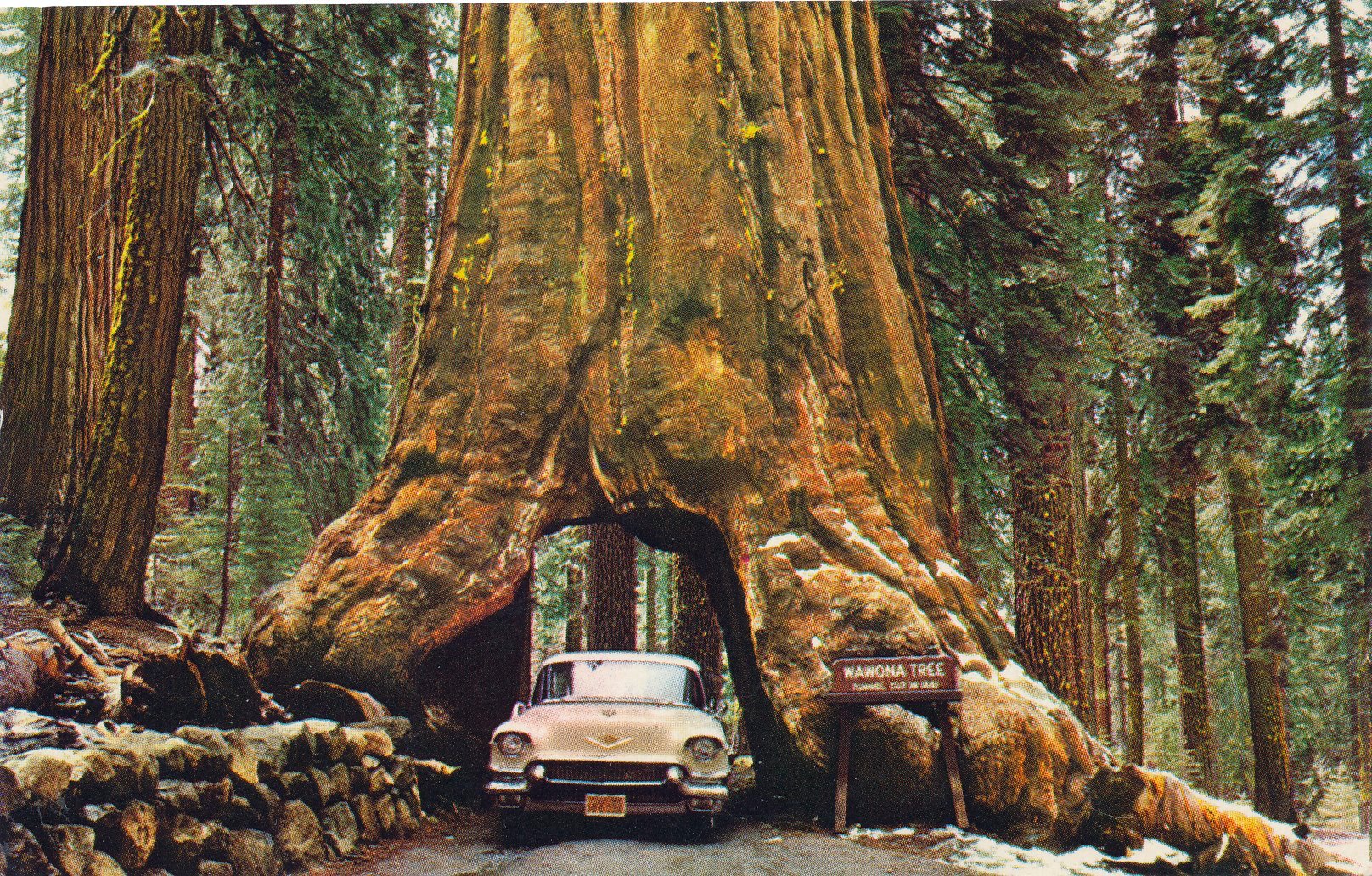 A 1950s postcard image of the now-fallen Wawona tree in Yosemite National Park.

We now know that the Great Basin bristlecones are the oldest surviving species of non-clonal organisms in the world. Technically, the eldest of all trees are actually clonal plants, or those which continually replicate themselves through layering (where a limb sprouts new roots) and vegetative cloning (where the root system expands underground and sends up new trunks). Though some clonal organisms have been estimated to be at least 80,000 years old, no individual part of the organism is actually alive for more than a few hundred years.

In contrast, non-clonal trees like sequoias and bristlecones rely on the structure established by their original seedlings for their entire lives, depending on the deceased wood created by earlier growth in a way that clonal plants do not. Every year during its growing season, a non-clonal tree adds cells to its trunk, which function to send water up to the leaves and sugar down to the roots. During the late autumn, the bristlecone produces cells much smaller in size than those during the active summer growth, resulting in the appearance of concentric rings when a trunk is cut crosswise.

Dendrochronology, or tree-ring dating, is still a fairly young field, established in the 1890s by astronomer A.E. Douglass while working at the Lowell Observatory in Northern Arizona. Attempting to uncover a correlation between sunspots and Earth’s weather patterns, Douglass hypothesized that tree rings would reflect these major climactic changes. While scientists had long understood the correlation between age and a tree’s ring count, Douglass was the first to piece together a detailed analysis of common patterns in the rings of different trees. 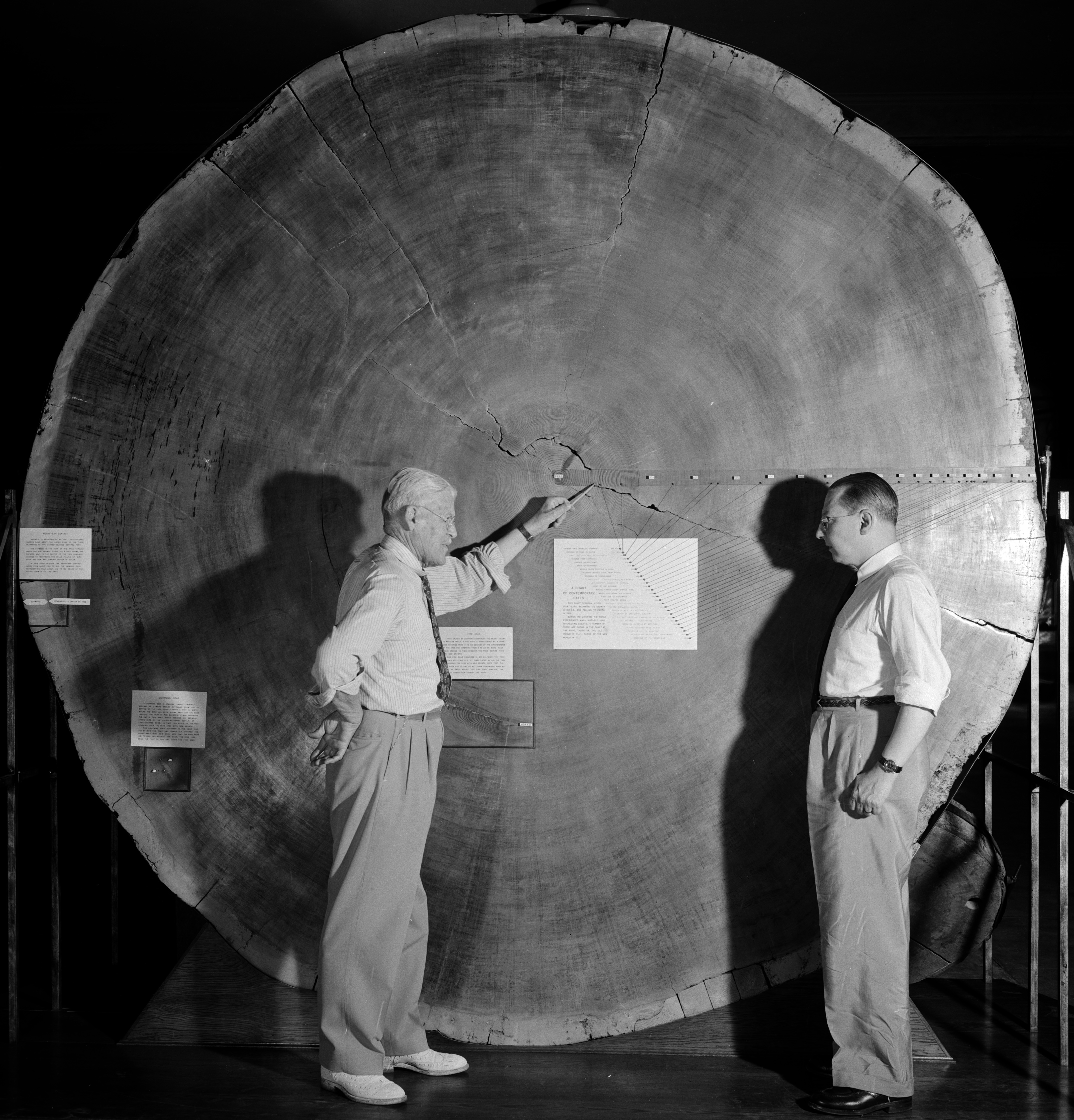 Douglass surveyed thousands of felled trees across the southwestern United States and used a method of cross-dating, or overlaying these patterns from trees felled during different eras, to trace major climactic events back thousands of years. When word got out about his timeline, Douglass was suddenly in high demand by archaeologists studying famous Native American sites like Chaco Canyon and Mesa Verde, whose age was previously determined by mere guesswork. Douglass cross-dated the rings on wooden beams found among the ruins to catalog the various sites in chronological order.

Decades later, Douglass established the Laboratory of Tree-Ring Research at the University of Arizona, which became the world leader in tree-ring analysis. Scientists affiliated with the Tree-Ring Lab, like Edward Schulman, eventually undertook the most comprehensive studies of Great Basin bristlecone pines.

Trunk slices in the archives of the Laboratory of Tree-Ring Research at the University of Arizona. Photo by PK Weis / southwestphotojournal.com.

A few years before Donald Currey began work in the Great Basin, several of the area’s most impressive trees were given individual names by activists working to establish a national park in the region. The bristlecone Currey would eventually fell was called Prometheus, after the Greek mythological character who stole fire from the gods and gave it to humans. Currey chose this particular specimen for his study because it seemed older than much of the surrounding forest, with a single living bark strip supporting a branch of lush foliage.

By the time of Currey’s survey, trees were typically dated using core samples taken with a hollow threaded bore screwed into a tree’s trunk. No larger than a soda straw, these cores then received surface preparations in a lab to make them easier to read under a microscope. While taking core samples from the Prometheus tree, which Currey labeled WPN-114, his boring bit snapped in the bristlecone’s dense wood. After requesting assistance from the Forest Service, a team was sent to fell the tree using chainsaws. Only days later, when Currey individually counted each of the tree’s rings, did he realize the gravity of his act.

Currey downplayed the discovery in a dry essay for Ecology magazine in 1965, in which he stated, “Allowing for the likelihood of missing rings and for the 100-inch height of the innermost counted ring, it may be tentatively concluded that WPN-114 began growing about 4,900 years ago.” Though its exact age is still debated, the Prometheus tree was certainly the oldest single tree scientists had ever encountered.

The Prometheus tree’s felling made it doubly symbolic, as the myth of its namesake captures both the human hunger for knowledge and the unintended negative consequences that often result from this desire. Though members of the scientific community and press were outraged that the tree was killed, Currey’s mistake ultimately provided the impetus to establish Great Basin National Park to protect the bristlecones. The death of the Prometheus tree also helped to change our larger perception of trees as an infinitely replenishing resource. “It’s not going to happen again,” says Schoettle. “But it wasn’t something that I think they struggled with at the time, because it was just a tree, and the mindset was that trees were a renewable resource and they would grow back. And it didn’t seem like it was any particularly special tree.” 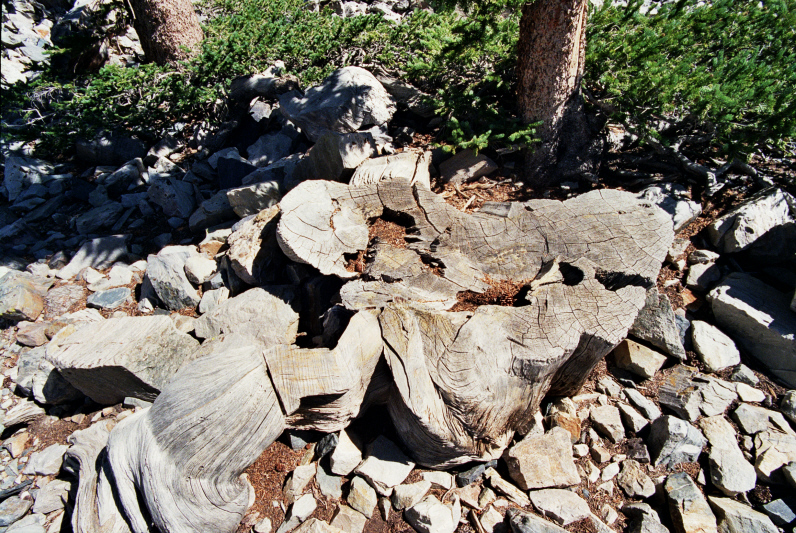 An unassuming stump is all that remains of the Prometheus tree, the world’s oldest non-clonal organism.

To this day, Prometheus still holds the count for the most rings of any tree, at 4,862. The next oldest tree, called Methuselah, was identified by Edward Schulman in the 1950s and is still alive today. Though initially made public, Methuselah’s whereabouts in the White Mountains of California have now been purposely obscured to prevent the tree’s destruction. Schoettle says the Forest Service conceals Methuselah’s location “so that we don’t love it to death.” In fact, visibility is a threat to any natural tourist destination—just this past January, a woman accidentally burned down ‘the Senator,’ the world’s fifth-oldest living tree, at a highly trafficked site in Central Florida.

But Tom Harlan knows of a tree somewhere in the White Mountains that might be even older. “There is one that Schulman cored, but he died before he could count the rings,” says Harlan. “It’s the oldest thing he ever collected, older than Methuselah and probably older than Prometheus. But I won’t show anybody which one it is.” 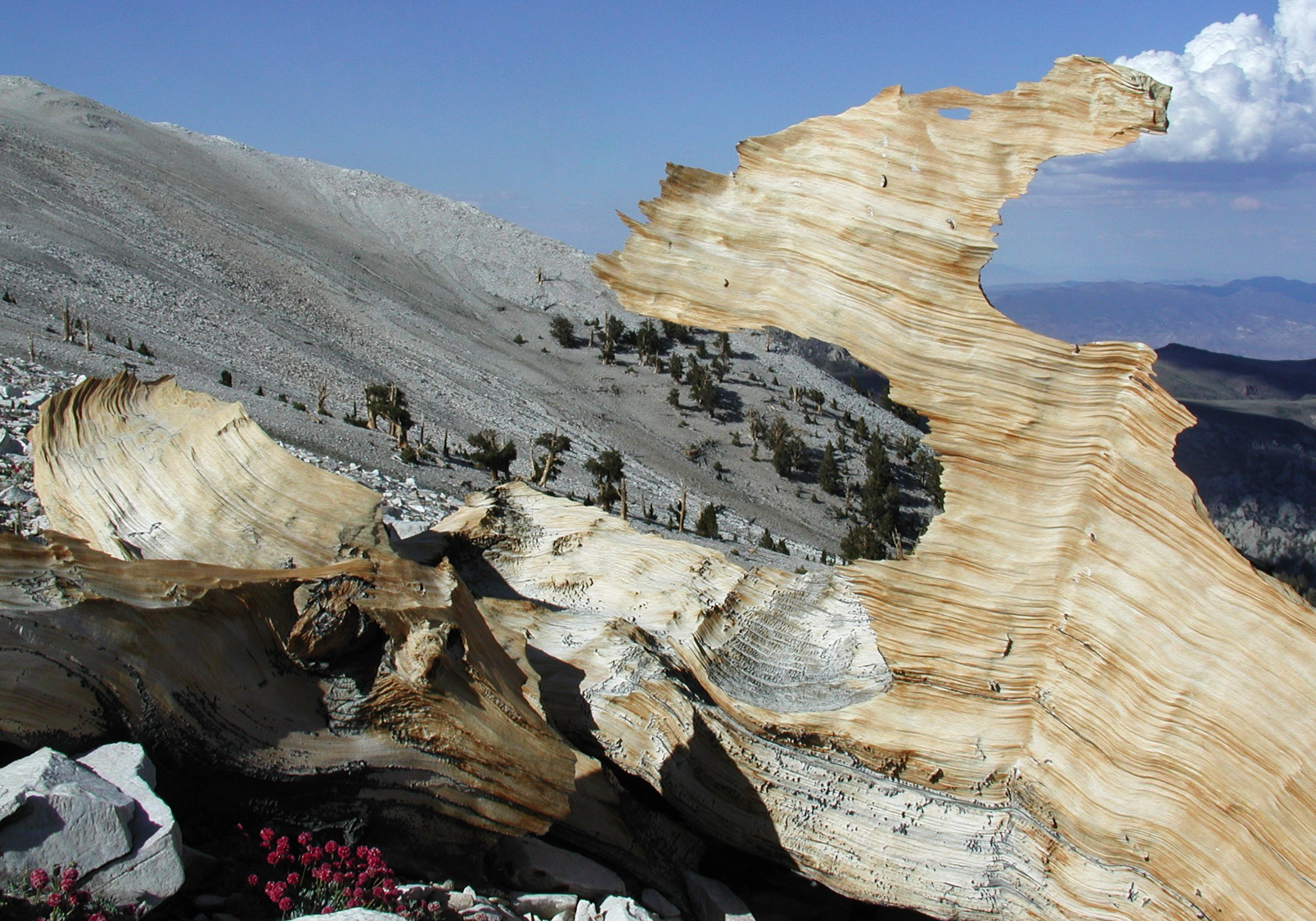 (Special thanks to Nick Turland, P.K. Weis, and Tom Harlan for their photographs.)

Before Camping Got Wimpy: Roughing It With the Victorians

Love Boats: The Delightfully Sinful History of CanoesTaxidermy Comes Alive! On the Web, the Silver Screen, and in Your Living Room