This article describes the export of goods from China to Mexico, noting Mexico’s origins as a stop on the trade route to Spain. It originally appeared in the February 1942 issue of American Collector magazine, a publication which ran from 1933-1948 and served antique collectors and dealers.

When one sees a piece of Oriental Lowestoft or a China trade item, the clock turns back a century and a half or more. In the shadow of such an antique, the collector sees, mentally, a fast-sailing East India merchantman. 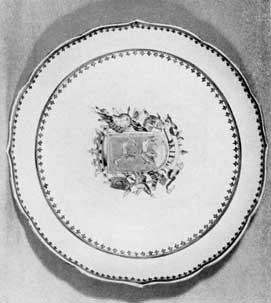 Homeward bound from Canton, its course was down the China coast, through the narrow Straits of Malacca between those islands already the Dutch East Indies, across the Indian Ocean, around the Cape of Good Hope, and northward to the home port in Europe or America. It was a hard voyage and it took months. Save for subjects of the Spanish crown, this was the only trade route for cargoes from China and is the one with which collectors are familiar.

For nearly two hundred years before the time of the Empress of India, the first American ship to trade direct with Canton, the Spaniards living at home or in the colonies of the Americas had established an exclusive and totally different route to the China coast. Those conversant with the affairs of Spain and her colonies have long known the details of the different way to China and realized the vast quantities of Chinese luxuries that were transported over it for the Spanish markets.

But generally this trade channel connecting China and Spain has been ignored and its importance not understood. It was not a single voyage half around the world. Instead, Chinese junks, Spanish galleons sailing both the Pacific and the Atlantic, trains of pack mules, and three important Mexican fairs were all part of it.

It started at the ports of China. From these, Chinese junks sailed a little over seven hundred miles to Manila in the Philippines. There the cargoes were transferred to Spanish galleons which sailed for Acapulco, then a thriving seaport on the west coast of Mexico.

Here, those bales, boxes, and bundles containing products of Chinese craftsmanship were again unloaded and transferred to pack mules and then the overland trip across Mexico for the Atlantic port of Vera Cruz began. On the way, these pack trains stopped at three trade fairs, Chilpanzinco, Mexico City, and Jalapa; finally, what was destined for Spain itself was stowed in the holds of other Spanish galleons at Vera Cruz. In convoys to protect them from commerce-raiding English ships, they then made the Atlantic crossing.

A good proportion of these luxuries from China remained, however, in Mexico, for prosperous Spanish noblemen and landowners appreciated the arts of China and bought liberally. In fact, via the trans-Pacific parts of this trade route, they sent orders for household refinements to be made and decorated especially for them in China. Such was the history of the armorial Oriental Lowestoft dinner service of which the large plate illustrated was a part.

Sometime between 1760 and 1780, the order for this dinner service was sent from Mexico City to Canton. Ignacio Leonee Gomez de Cervantes, Marquis de Salinas del Rio Pizuerga, whose family had been resident in Mexico since the 16th Century desired a dinner service decorated with the coat-of-arms of the Cervantes family of Castilian origin.

That he should order this via Manila was logical. Miguel Lopez Legaspi, who, in 1564, sailed from the Mexican west coast in command of the expedition which conquered the Philippine Islands for the King of Spain, was the ancestor of the marquis’ wife, Dona Ana Maria Altamirano de Velasco Legaspi. Thus, his conquest of the Philippines made possible an avenue of trade by which her husband was able to obtain this large dinner service of Chinese porcelain specially decorated in Canton with his coat-of-arms.

A good part of this table service has survived and now is in the collection of A. Algara R. de Terreros, a direct descendant now living in New York City, who inherited it from his father, Don Francisco Algara y de Cervantes. His collection of heirlooms also includes several 18th-Century family portraits all painted in Mexico. Of these, some were from the palette of Miguel Cabrera, the best known Mexican artist of the mid-18th Century.

The family portraits have been loaned by Senor A. Algara R. de Terreros to the Brooklyn Museum of Art and were part of the recent special exhibition, America South of the United States. Soon they will again hang in another exhibition at the museum which will be concerned with Mexican art.