This article notes the production and design process of Chinese Lowestoft and its import into to Europe and America prior to and during the 18th century. It originally appeared in the October 1942 issue of American Collector magazine, a publication which ran from 1933-1948 and served antique collectors and dealers.

“A sett of large blue and white China with the badge of the Society of the Cincinnati if to be had, ” wrote George Washington to his agent, Colonel Tench Tilghman, regarding the purchase of goods just arrived on the ship Pallas in 1785. This was one of several items which General Washington directed bought for his home on the Potomac. 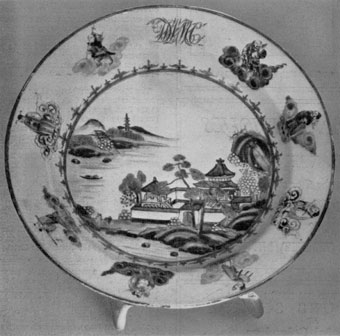 With the typical Chinese garden scene, it bears on the border the monogram of Governor and Mrs. De Witt Clinton. Made late in the 18th Century it was probably part of a dinner service for which the order was sent from New York to Canton.

He referred to a bluish white porcelain, made and decorated in China for the western trade. In his day it was known as “East India china” and was regarded as too fine for everyday use even in such well-to-do households as those of John Hancock, William Morris, John Rutledge, and other American worthies.

We collect it today as Oriental Lowestoft and the story back of it involves patient Chinese potters in an inland city on the Yangtze River, hard-headed Cantonese merchants, avid western traders, sailing ships, and well-appointed houses, some of them located on the New England coast and built with a “Widow’s walk.”

European trade with China began, of course, after numerous adventurers had penetrated to “Far Cathay” and brought back fine silks, spices and porcelains to give weight to their tall tales of a fabulous country unbelievably rich in commercial opportunities.

Traders began knocking at the reluctant gates of Canton and other Chinese coastal cities long before Columbus set out on his quest for a shorter and better route, and by the 16th Century the commercial value of this traffic with the Orient gave rise to various East India companies. That of Portugal was first. England established hers in 1599. Soon it possessed the most powerful one of all.

Bulking large in the cargoes which European merchants and later those from America, assembled in Canton for the homeward journey was china, especially this ware with bluish white cast and Oriental designs delicately brushed on chiefly in cobalt blue and gold. The earliest examples were of course Chinese in shape, decorative feeling. But much as Europeans might admire Oriental products, they had their own ideas about table ware and it was not long before the porcelains exported from Canton took on western shapes and decorative detail.

The Chinese government might be strongly isolationist and frown upon the “foreign devils” but Cantonese merchants were as eager for profit as the western traders. So they ordered the potters in Ching-te-chen, a potting city famous from the 9th Century, to make flatter and shallower plates, cups and saucers in the European manner, helmet-shaped pitchers, chocolate and coffee pots, punch bowls, dinner services and many other items in favor with Occidental households.

Glazed but undecorated, it was then brought overland and by river routes some five hundred miles to Canton where the desired design was applied in the painstaking manner characteristic of the Oriental. It was put through a second firing to fuse the overglaze enamels. Then it was ready for the European traders.

It was ridiculously cheap, each piece averaging about a penny. Quantities of it were packed in bales and used as ballast. It naturally brought high prices in the home market. So great was the profit to be realized that the long and dangerous ocean voyage wherein some ships got through, others foundered, were risks gladly taken.

In the course of the long period of nearly three hundred years quantities of this china were shipped to Europe and America. Despite the perils of the sea, a large proportion of it arrived safely. The high point was reached in the 18th Century and during the 1780s American ships joined the traffic stream bound for Canton.

Our China trade began with the voyage of the Empress of China which sailed from New York early in 1784. Other ships followed. Eleven years later our commerce with the Orient outstripped that of the powerful English East India Company. By the turn of the century some of the Cantonese merchants were advertising in American newspapers. Here is one taken from the Providence Gazette:

“Yam Shinqua, Chinaware Merchant at Canton begs leave respectively to inform the American Merchants, Supercargoes, and Captains that he produced to be manufactured in the best manner, all sorts of Chinaware with Arms, Cyphers, and other Decorations (if required) painted in a very superior style and on the most reasonable Terms. All orders carefully and promptly attended to. Canton (China) Jan. 8, 1804.”

This is an advertisement which, according to J. A. Lloyd Hyde in his excellent book, Oriental Lowestoft, tells the story of this porcelain in a nutshell. In other words, English or American families who wanted a specially decorated dinner service had only to send the desired pattern out by a sailing ship and after six months or a year the completed dinner service would be put on board another ship and eventually reach its destination.

The whole transaction might take two years, which seems a long time in these days of rapid motion, but many orders were thus executed for both British, Continental and American clients. The latter favored monograms, patriotic or fraternal decorations, coats of arms of cities or states or the like. Ship decorations were popular in both England and America. Pictures of sporting and country scenes were also sent to Canton to be reproduced on this china. Sometimes the design on this Oriental Lowestoft was very simple with only a floral medallion and a narrow band of blue enlivened by star-like marks in gold.

The scene depicted on the plate shown here is obviously Oriental and reminiscent of the ever popular Chinese garden scene. The monogram which is that of Governor De Witt Clinton and his wife shows that it was one of the orders “carefully and promptly attended to.”