Anybody who collects vintage 20th-century American music posters is probably aware of Hatch Show Print, a letterpress shop in Nashville that’s been in continuous operation since its founding in 1879. Known for its simple, well designed posters for performers like Johnny Cash, Elvis, Hank Williams, and Dolly Parton, the shop’s history was celebrated in a beautiful book published in 2001 by Chronicle Books. 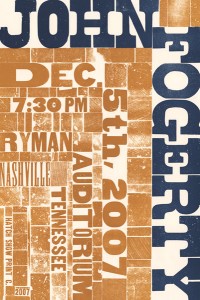 When I heard that Hatch Show Print manager and chief designer Jim Sherraden was going to be speaking down the street from our office on the campus of CCA, a local art school, I got excited. I vaguely had the idea that Sherraden was somehow responsible for the resurrection of Hatch Show Print in the 1990s, and perhaps even of the whole letterpress poster movement.

It turns out that in addition to being a good poster designer, Sherraden had staying power. He started at Hatch in 1984 just as the last of the old timers – the printers who wore blue to work and were the institutional memory of 20th-century printing techniques – were finishing up.  He managed to learn their trade and then hang around long enough to lead the charge when letterpress got cool (or hot) again.

Specifically, in the 1990s, acts like REM, Pearl Jam, the Beastie Boys, and Emmylou Harris decided that having a limited run of individually printed posters from hand carved wooden (or linoleum) blocks would be a great thank-you item to give their closest friends, employees, and roadies. And their promoters knew Hatch from the days when those bands were playing small venues in Nashville, and called Sherraden to make it happen.

Once they saw how popular the posters were, they started doing larger runs to sell to fans at concerts. And today everybody from Coldplay to CNN (for their political coverage) wants a letterpress Hatch Show Print poster as a promotional flourish. 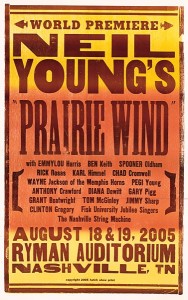 What’s interesting about Hatch, and Sherraden, is that profit is not the motive, but rather the preservation of the history of 20th-century print making, and of the physical library of wood block carvings and type that Hatch constantly recycles to give its current work that retro feel.

“Preservation through production” seems to be Sherraden’s, and Hatch’s motto. Now a non profit under the auspices of the Country Music Hall of Fame (this actually makes sense because many of Hatch’s great mid-century posters were for performers at Nashville’s Grand Ole Opry), the Hatch Shop is the steward of more than 100 years worth of wooden typefaces, photographic plates, and hand-carved artwork neatly organized in old-style printers cabinets – the envy of any modern letterpress junkie. Not to mention random signed photos of artists, file folders marked “Colonel Parker,” and other priceless music-industry ephemera.

And the idea of the place is to keep that collection alive by using it – every day – to make modern limited-edition posters for current clients that capture the spirit of an earlier, simpler time. Rather than have this amazing collection sold off to antique shops and scattered to the winds when Hatch had to move to another location in 1991, recalls Sherraden, he dedicated himself to preserving it intact by making it commercially useful. When the shop’s designers (there are about ten employees total) need inspiration for a new poster, they’ll dig out an old woodcut of a bucking bronco or a saxophone, or some really unusual typeface, and use that as a starting point. 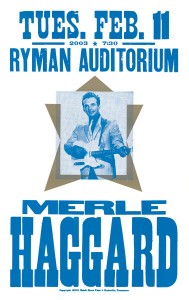 Though Hatch posters are all printed by hand using the same techniques as 100 years ago (when the focus was circus and carnival-type advertising broadsheets), Sherraden credits the computer with the recent boom in letterpress popularity. “Wood blocks have a soul,” he says, calling these old analog techniques the perfect analog to the digital age. In addition to posters for famous performer clients, Hatch also produces wedding invitations, books, and even wine labels.

Although Hatch has been flying high these past few years, with a book now in its fifth printing and shows of its work at the Smithsonian and the Kennedy Center, Sherraden seems down to earth and no nonsense. “We succeed because we’re polite and nice people,” he said. And he pointed out that there’s little hierarchy or division of labor at the shop – every designer prints their own posters, and all printers design their own work. Its the craftsman model, for sure.

Sherraden’s presentation included a great slide show, and plenty of cool printing industry trivia, e.g.: 1) eight out of ten workers lost their composing room jobs when Mergenthaler’ linotype machine came along in the early 20th century; 2) “type high,” or .9186 inches, was set at the exact height of an English shilling, because everyone had a shilling around to measure with.

The best part of the talk, however, was Sherraden’s own enthusiasm for what Hatch is doing, preserving the past by re-using it in new, creative ways. I hope we can do an interview with him on the past (and future) of the American music poster.  Stay tuned.